You may recall that I did the illustration cover art for the European release of Blazblue. After the success of the game’s release last year, I was sent a giant box load of stuff.

The mail lady gave me her usual smile.

“Good morning!” she exclaimed. “Got a really big package for you today!”

I stared at it, a bit shocked, trying to remember what the heck it was that I bought online. It didn’t look like a box of figures. I rarely do combined shipping. And it was heavy too! 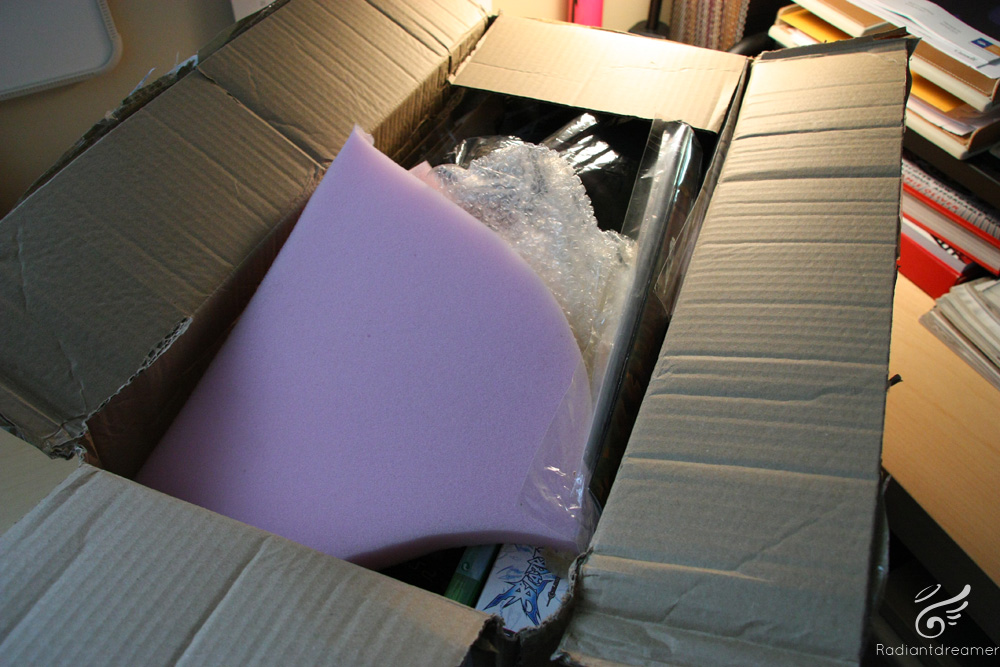 Bringing it in, I looked at the shipping label and knew exactly who it was from. I was super excited to open the box and see what was inside. I was expecting to receive a couple of copies of the game, but I did not expect this! The guys at Zen really know how to say thanks! I was floored. 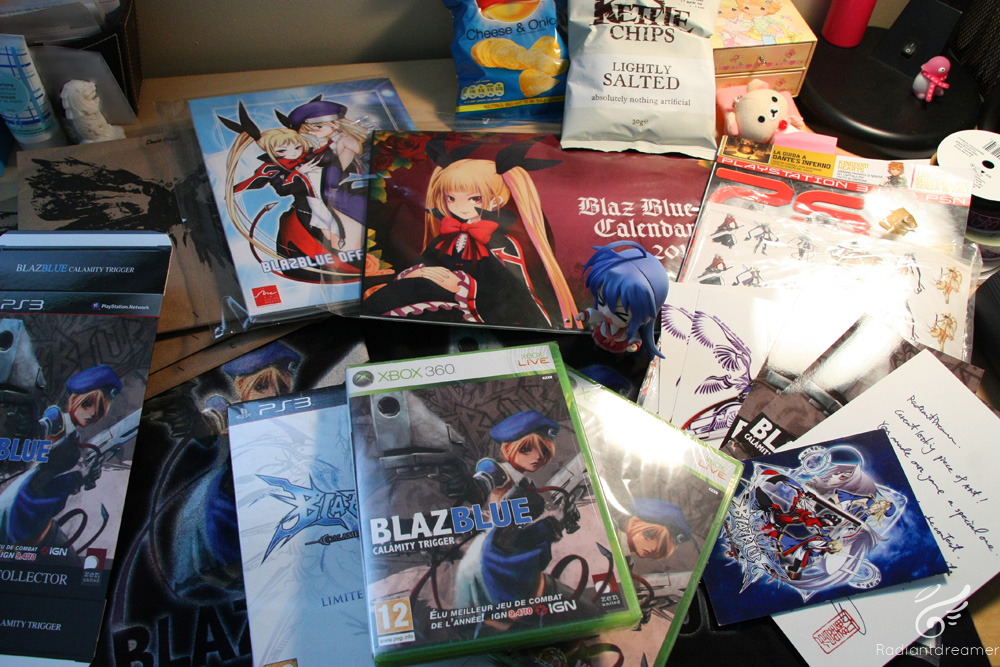 Lots and LOTS of swag laid out on my desk. 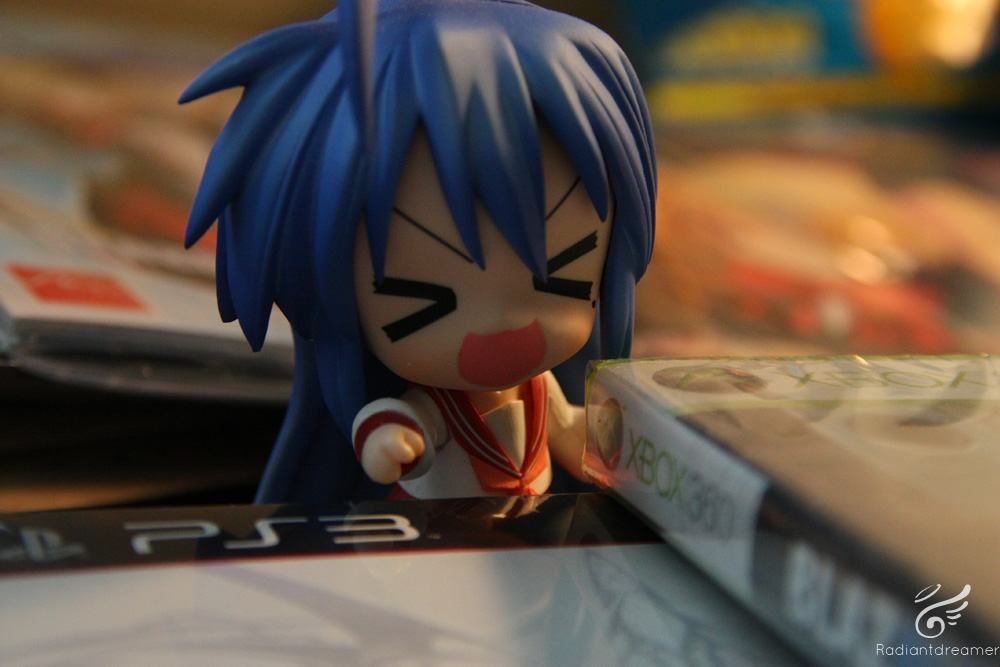 Konata is overjoyed, of course. She’s literally swimming in it! You may recall this image a while back in one of my random posts. 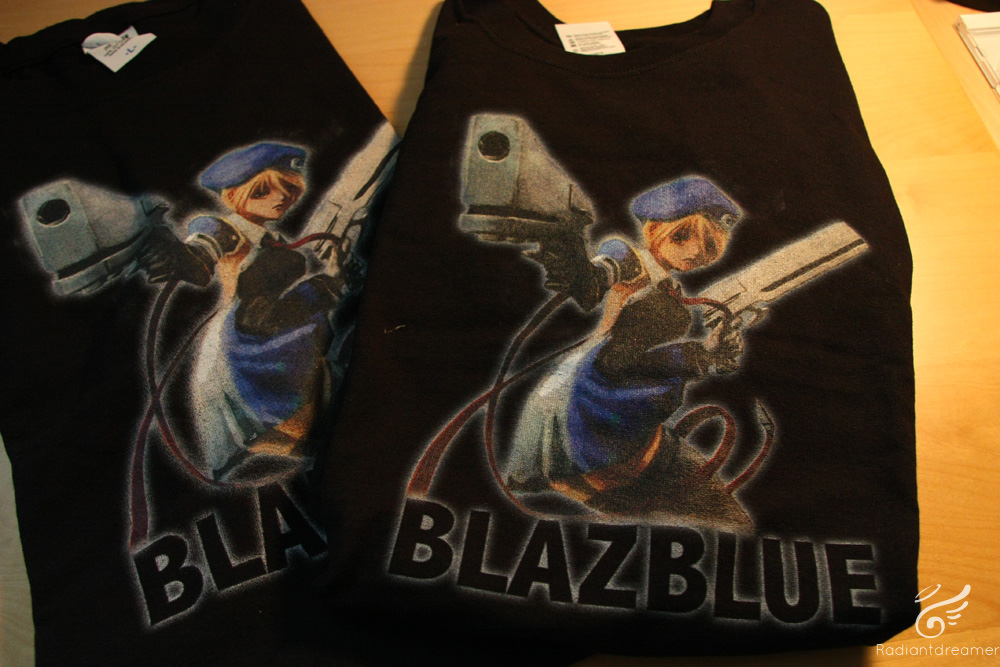 I got some T-shirts too! It’s quite an amazing sensation to see one’s own artwork on a mass-production T-shirt. 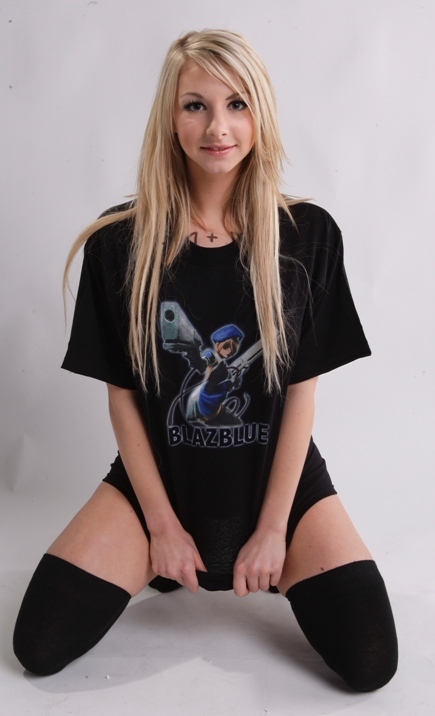 Of course, rather than wear it myself, here’s a model wearing it. Double Plus on that sensation when a hot girl is wearing a T-shirt with one’s artwork on it. 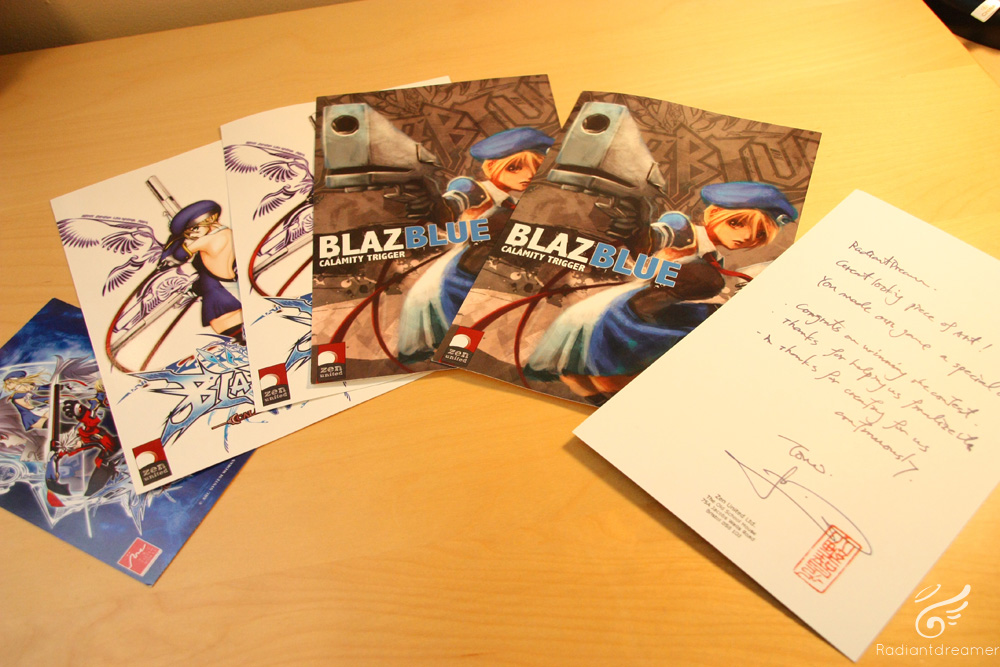 A stack of postcards. I believe these were distributed at the trade shows. 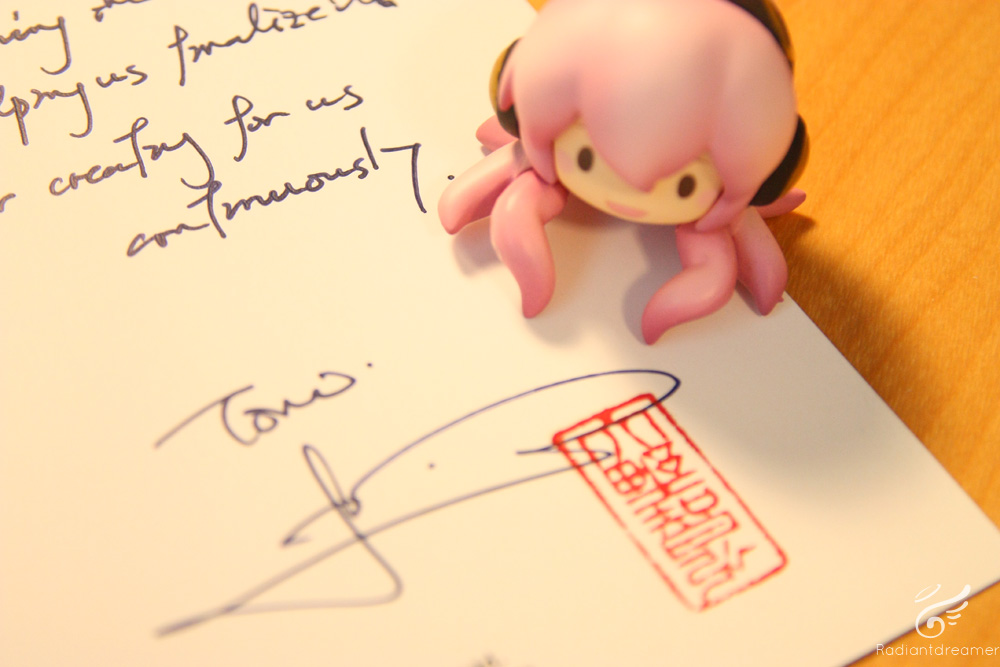 A personally signed postcard from the owner at Zen United. Seeing this again brings happiness to my heart. It was an honor working with him. I couldn’t have asked for a better client, really. 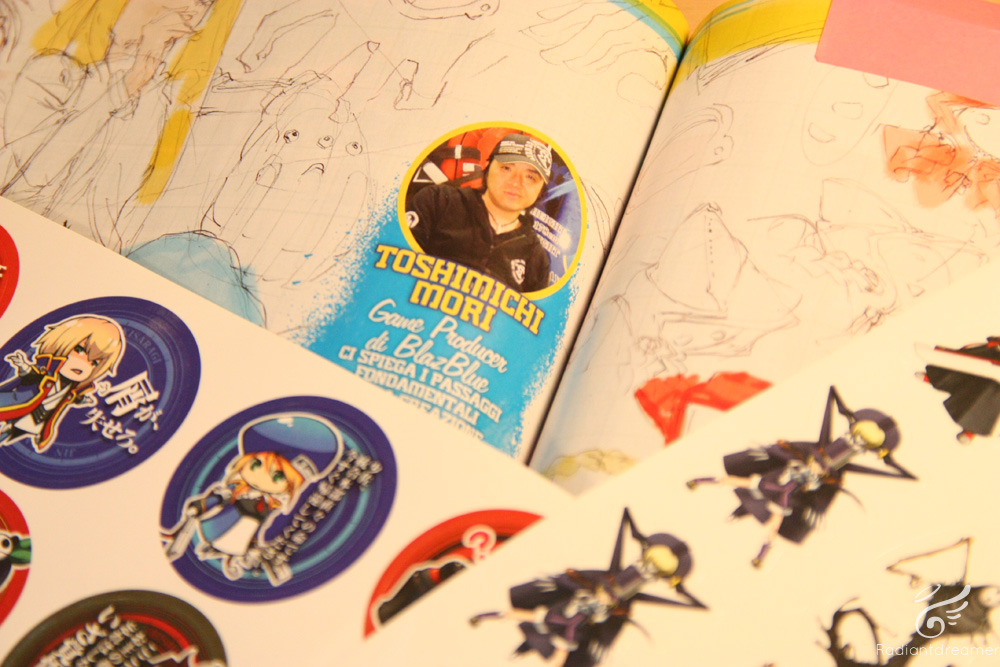 Included were a bunch of other promo goods including stickers, and some European game magazines featuring Blazblue and other media press. Toshimichi Mori actually looked at and approved the cover art! 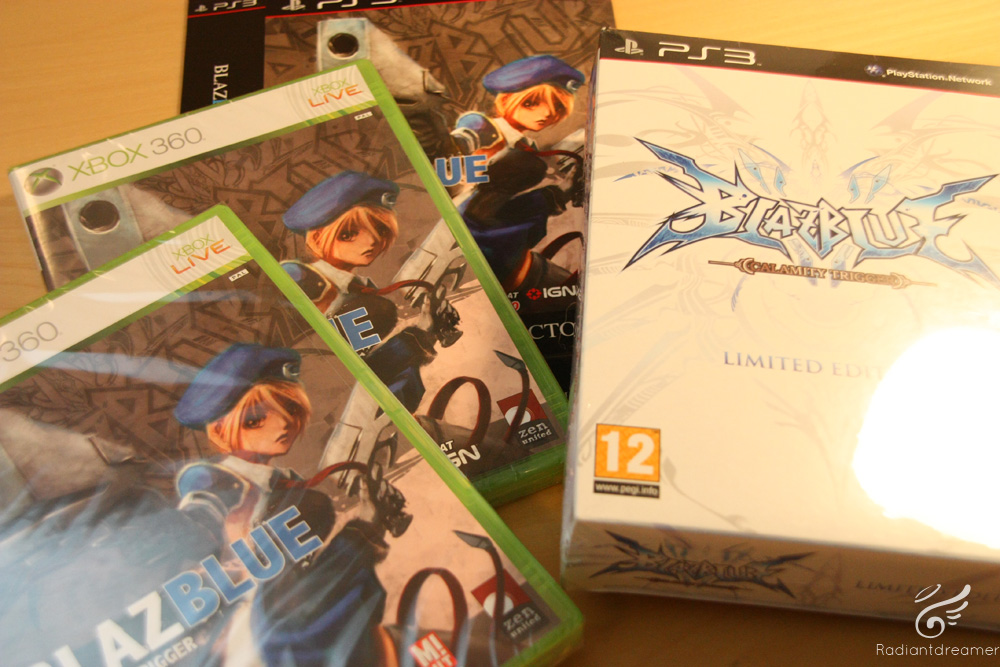 The editions of the games I got. They’re for different parts of Europe! 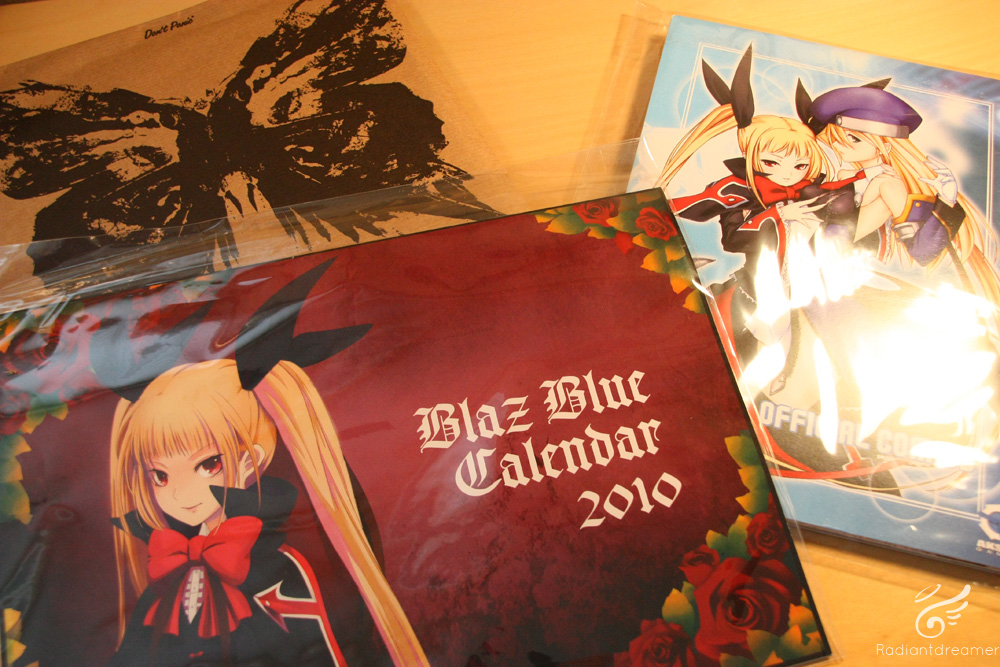 A beautifully decorated 2010 calendar. Full color illustrations inside. Also two comic books. You could call them doujinshi, but they’re official. 🙂

And the butterfly package in the back is actually a “clubzone” type magazine called Don’t Panic. The Blazblue poster was distributed through them as well, though those posters are folded, and there’s something unrelated on the back. 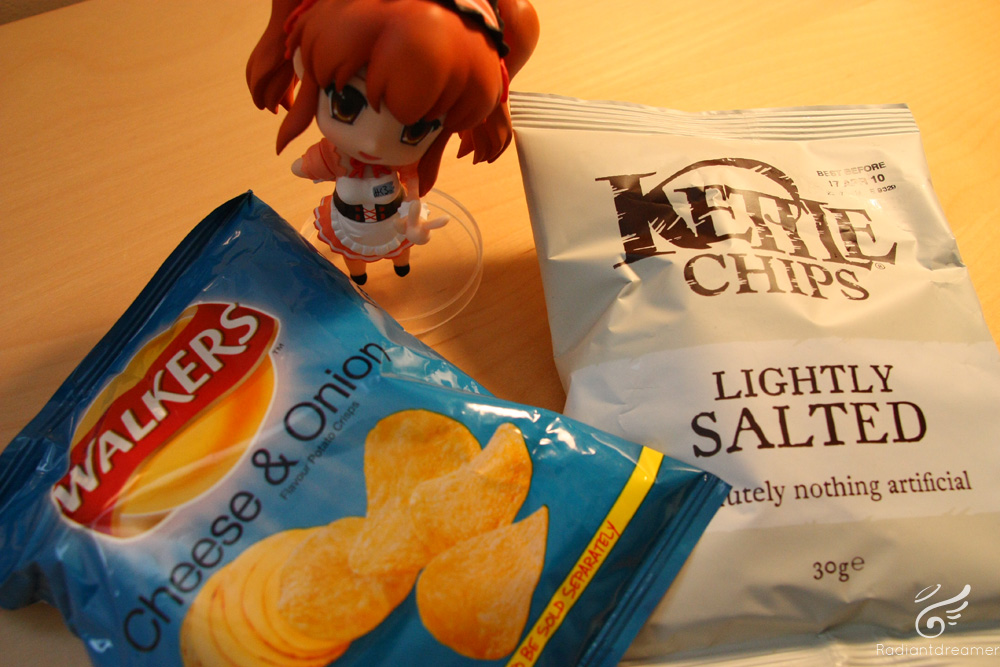 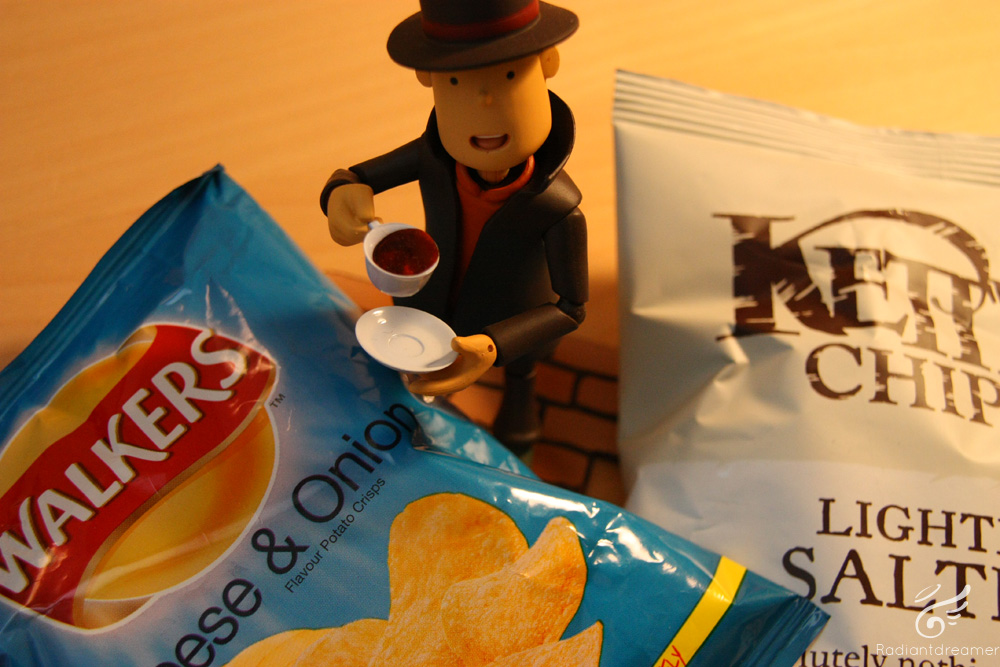 Good heavens, would you care for a spot of tea with the good professor? 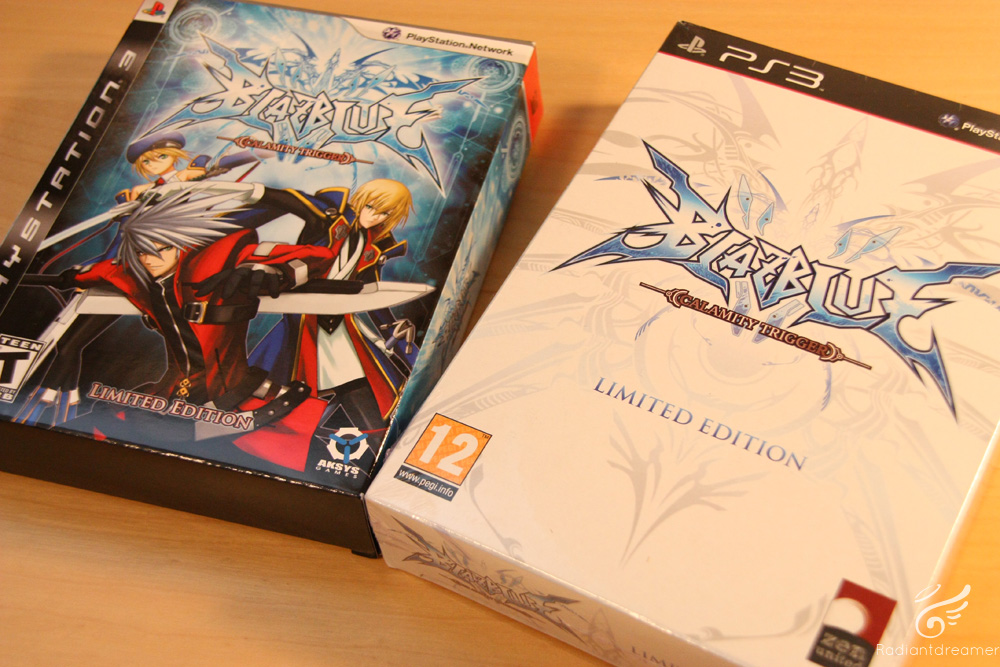 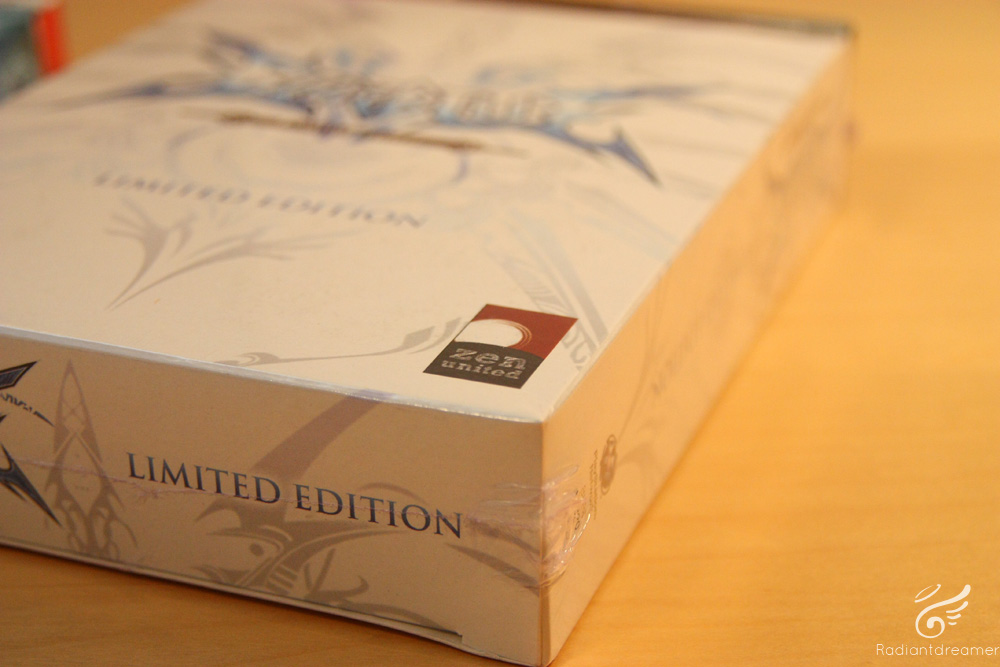 I confess, I broke the seal to check out the contents inside. The game is still sealed though. I have no intention of selling this anyway, so no point keeping it wrapped up. 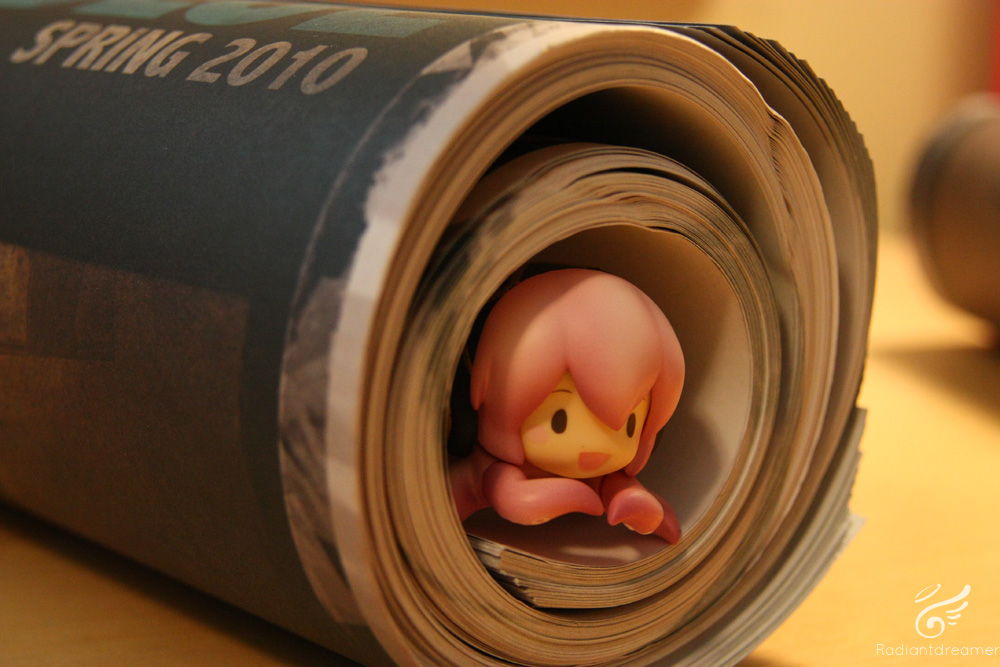 Now this is interesting… It’s a barrel… of something… 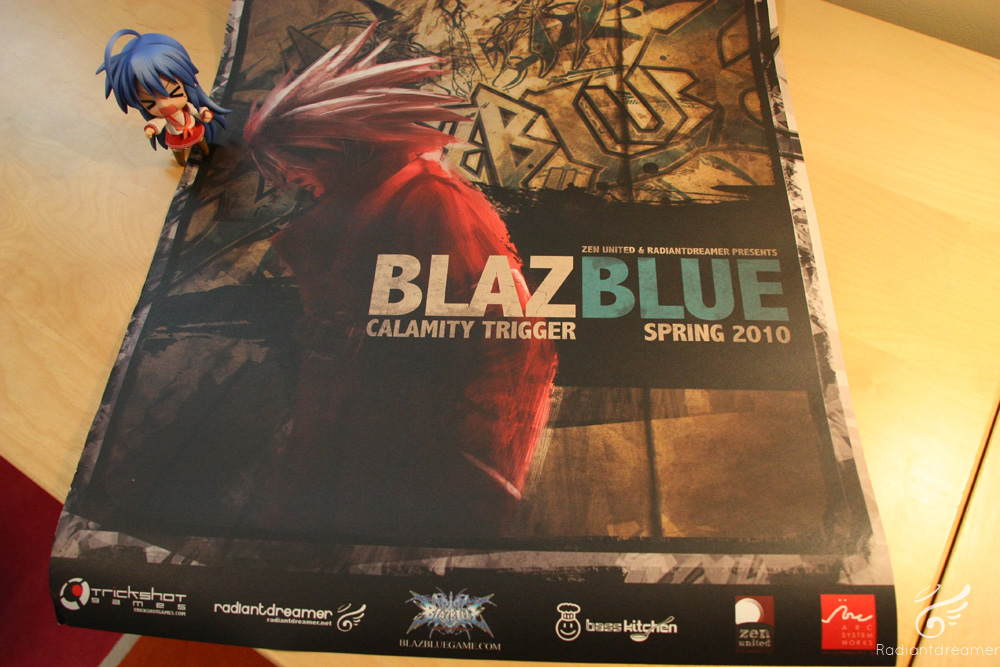 This was the original Blazblue illustration I did, and that got printed into a poster. I actually did the overlay for the whole thing too. That’s why you see “Trickshot Games” there. 😛

The original image wasn’t quite the right dimensions for the poster size, so I redid the borders, and I also made the text match the final cover.

So how big is this poster? 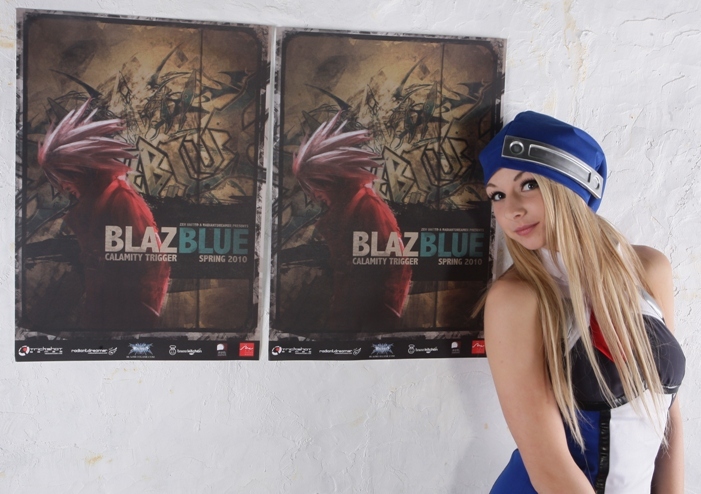 Noel poses beside them to give you a sense of scale.

Unfortunately, this poster is now sold out. I think 800,000 of these were printed out, and now they’re all gone! But I’ve got some, and I want to give some away.

So here’s the deal, go to my facebook page at https://facebook.com/radiantdreamer and click LIKE on the post that links back to this one. (You’ll have to be a fan first if you aren’t already).

How many posters I give away will depend on how many people click that like button. Winners are randomly chosen.

Winners will each receive one poster, signed by me (if you’d like), in a poster tube (so it’s not folded or damaged during shipment).

Get on it now! I’ll announce the winners later!

I create stuff in my mind, and try to barf it out onto tangible mediums such as Photoshop, and video game art. Sometimes, I get paid to do it because I'm a freelance artist working in the video games industry. Getting paid to do what I love (video games, and art) is my dream come true!
Totally Random Prizing!
Mirai Nendoroid Prototype – LEAKED!