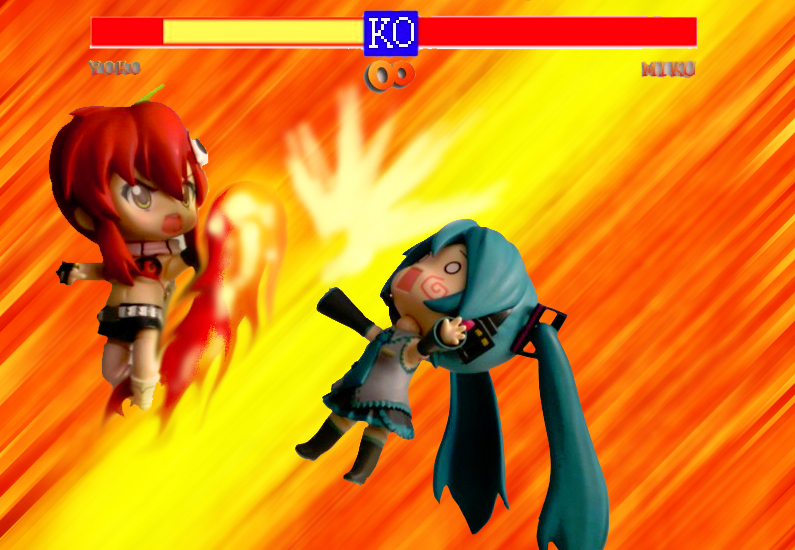 A lot of stuff has happened in these past couple of weeks that I’d like to post about, but really lack the time. I fixed a couple of broken figures, cleaned figures, got new figures, I actually attended an Olympic event, and did some commission work. In addition, I’ve been working like a fiend on my new iPhone game. I’ve also been playing a lot of Resonance of Fate (yes, it won me over Final Fantasy XIII) and thoroughly enjoying it. It reminds me a lot of Valkyria Chronicles for some reason, which was also epic. 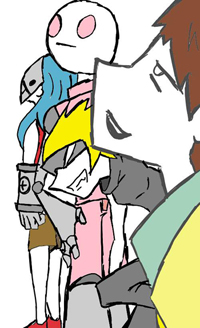 Well, to start off, I was commissioned to do a piece of art a couple of weeks ago. It’s probably some weaboo who’s writing some sort of animu story with some lame animations. (I will tell you why I’m being so bitter in a moment). The picture on the left is the one that this guy gave me to use as “reference” for their character.

The task I was assigned to, was to create a front and back for them to use as reference for their animation.

You’ll excuse me for squishing the aspect ratio of this drawing, because I needed the text to balance out on my blog. Click on the image if you want to see what it’s supposed to look like.

The strange blue-haired creature on the left with the mask was supposed to be the one that I drew from. Supposedly some sort of ninja who’s shy and quiet, but is strong and able to fight.

Within the time-frame that I was doing this work, the dude decided to change her name, and her personality type. I can’t remember what her initial generic name was, but they changed it to a generic Japanese name Yui. Anyway, I took her and created this: 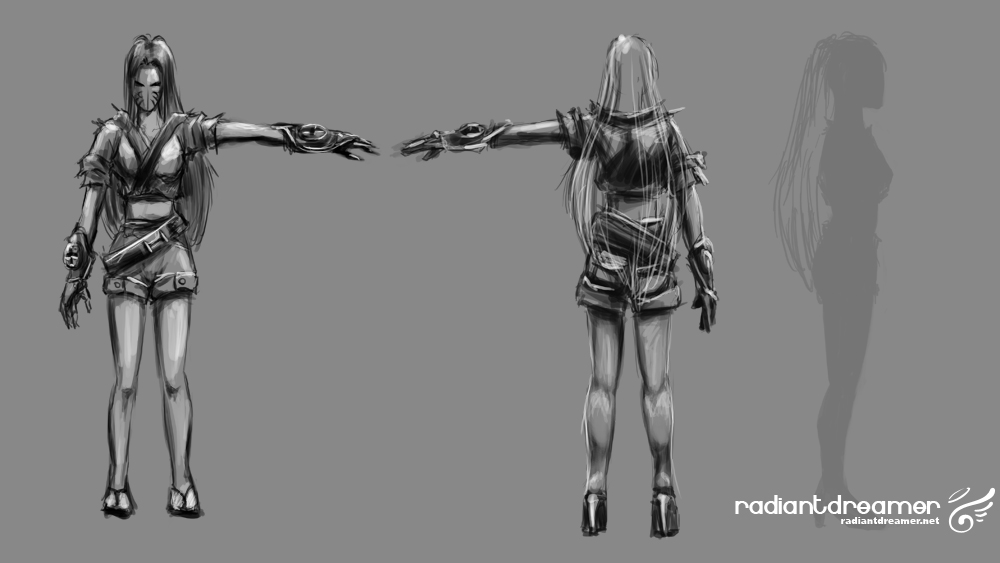 Still somewhat generic, but overall a great improvement. And as per my usual way of doing commissioned work, I recorded a video of it being done, and uploaded it to youtube, to prove to the client that the work is done, and how long it took.

This is where the trouble started.

After I notified him with a link to the youtube video, I no longer got any response. A week went by with me sending him emails, and no response. I discovered that he also doesn’t have a paypal account (at least not with the associated email address he gave me).

I should have given this more thought before uploading to youtube. This is a 720p video after all. This guy was also trying to keep costs low, as he could only afford to pay me a very small sum of money. He most likely took a print-screen of the video and that was more than sufficient for him (I mean, look at the art he gave me!). I took it down after that, but it might have already been too late.

Lesson learned. I’ve changed my rules for commissioning now. At the same time, I now have a fear of uploading my images online. There’s absolutely nothing stopping people from using my work as their own. Who knows? There could be an artbook out there with my art in it “drawn by somebody else”, or some T-shirt in China with my art on it titled “radient draemr”.

It looks like I’m out a payment. I’ve opened up the video again, so you guys can check it out. I use a different method getting my rough-in this time.

So Blazblue was supposed to come out today in UK, but hasn’t. If it had, then today’s post would have been about something different. I’m just as giddy in anticipation as the Europeans, since my work is ON THEIR BOX ART WOOHOO!

Some Europeans expressed their frustration in a fun way though.

I really do apologize if I haven’t been commenting on your blogs.

Things have been busy: 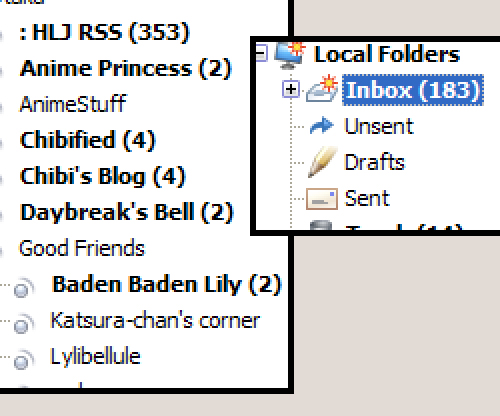 Bleh 183 unread emails is a lot. Thanks for writing, guys, and I apologize to some of you if I haven’t replied.

On the left of this image is a crop of my RSS feed. You guys in the Good Friends section are the people that have made a big difference in my blogging life, because you blog about some cool shit, or someone I know personally or heck, all of the above. (there’s actually a lot of people in this section, but you know who you are!) Thanks for blogging, and thanks for reading my blog.

The others on my RSS feed are the blogs that I like to read too, and are considered friends as well. Keep blogging guys, because I do read them when I can. 😀

Last night, I got a little bit of free time, so I did another very random paint. Didn’t really use any new techniques here, but it was fun to just play around. 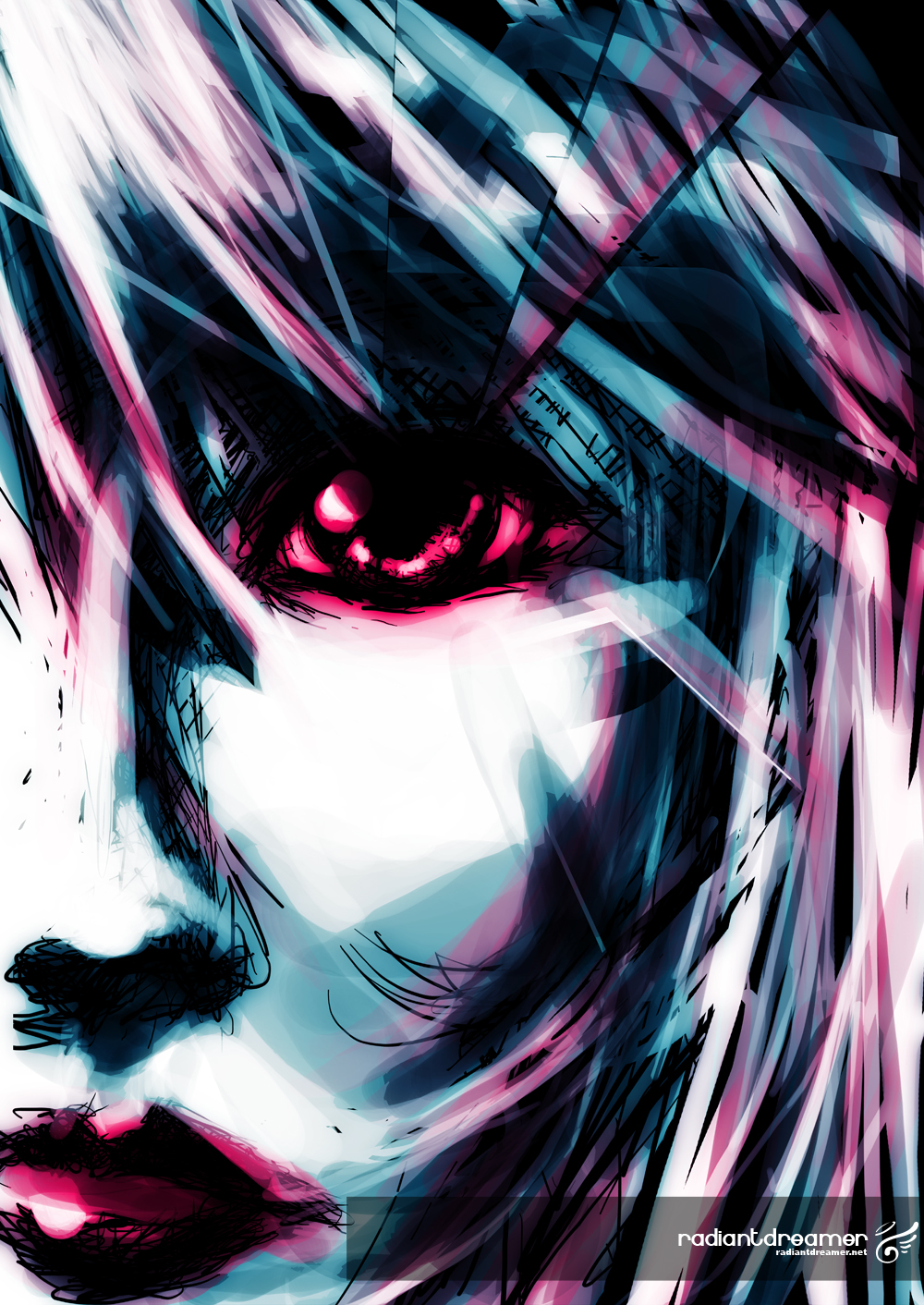 The progress of my iPhone game is coming along quite well.

I revamped the website, and started a contest to name the game. A few sites picked up the news and posted it on their iPhone news sites. I’m pretty grateful for that, and the site has spiked in hits for a while since then.

While the contest for it is now officially closed, do keep your eye out on the game when it comes out!

EDIT: Decided to replace my little Konata avatar and make a photoshop image out of rockleelotus‘ Little Street Fighters, since he said there’s no budget for photoshop. 🙂