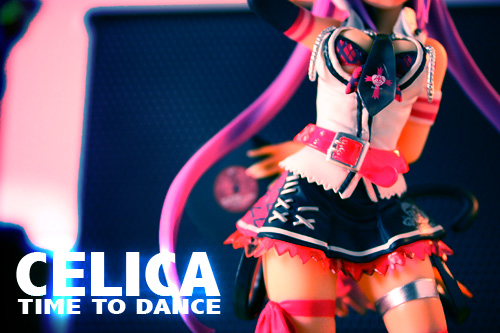 Rare figure, GET! Plus a tutorial on how to make a custom base! Let’s get started!

Quite a long time ago, Konami released a bunch of “mascot” character figures for their Beatmania series. Stupidly, I missed out on the opportunity to pick up a wicked-cool nekomimi. Since then, I had been seeking one ever since I was re-introduced to her when I randomly stumbled upon some pix of her on the net.

I was fortunate enough to snag one for a decent price (decent as in more than retail, but still cheaper than what most people were offering) from ebay.

Before I start snapping pictures, I wanted to talk about the base. When Lyli posted pix of her Celica, she had placed her on a CD with a spindle in the middle. I quite liked that idea. Even though Celica can stand on her own, it’s a bit of a risk without pegs holding her up. But I did like the CD idea.

I decided to make a custom base. The technique I’m going to show below is something that you can do for virtually ANY base. Maybe you think one of your bases is too boring? Maybe your old base melted?

You can do this, in combination with my pegs tutorial and a wood base. And you don’t have to use a CD in particular either. You can use anything you can imagine – a pencil board, a mouse pad if you so desire… 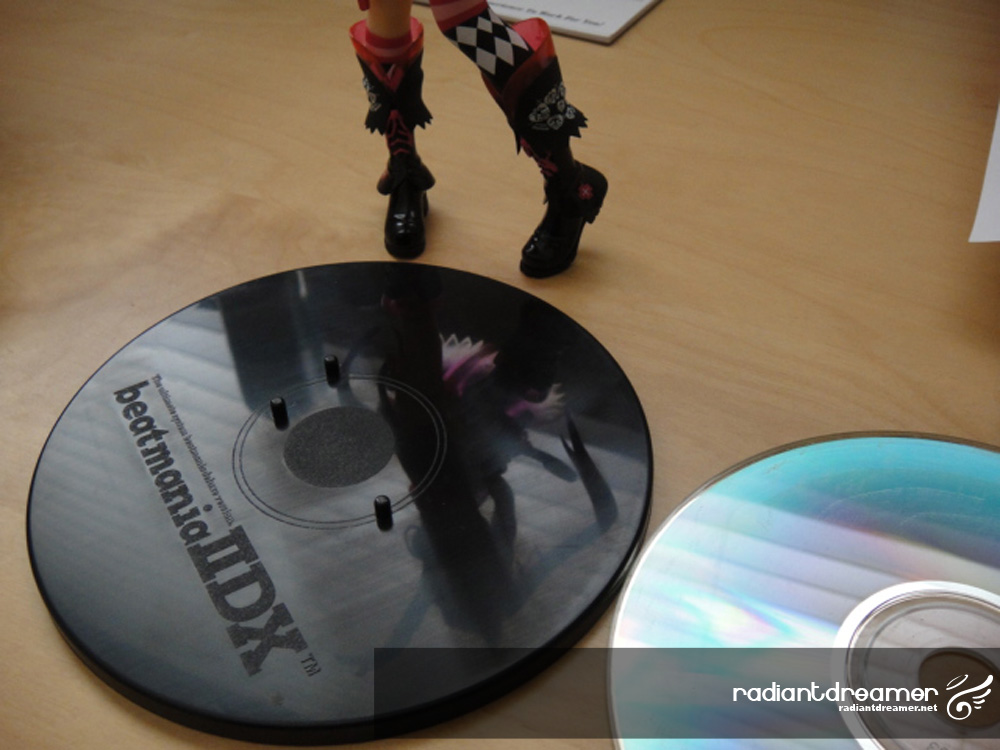 So here’s the base. It’s nice, has beatmaniaIIDX engraved in it, but other than that, it’s just a black base. There are three pegs that hold up Celica. I want to basically put a CD on top of this base. 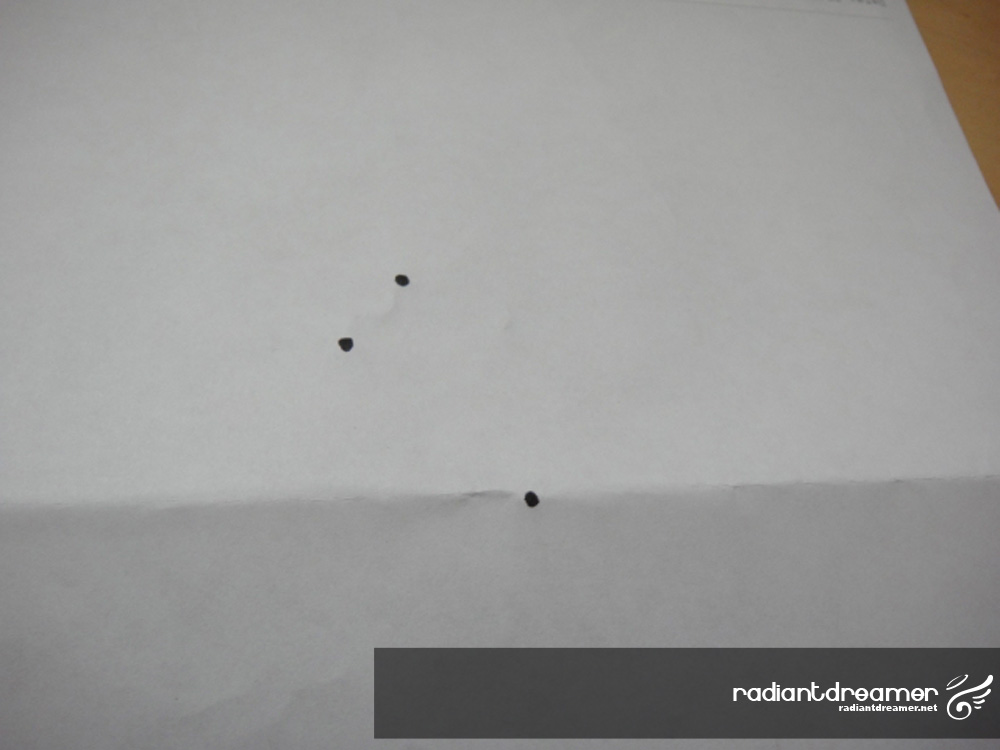 To put the CD on top, I need to make holes for the pegs. To get the reference for these holes, I put a sheet of paper on top of the base, and feel for the pegs. Using a black marker, I mark where the pegs are. 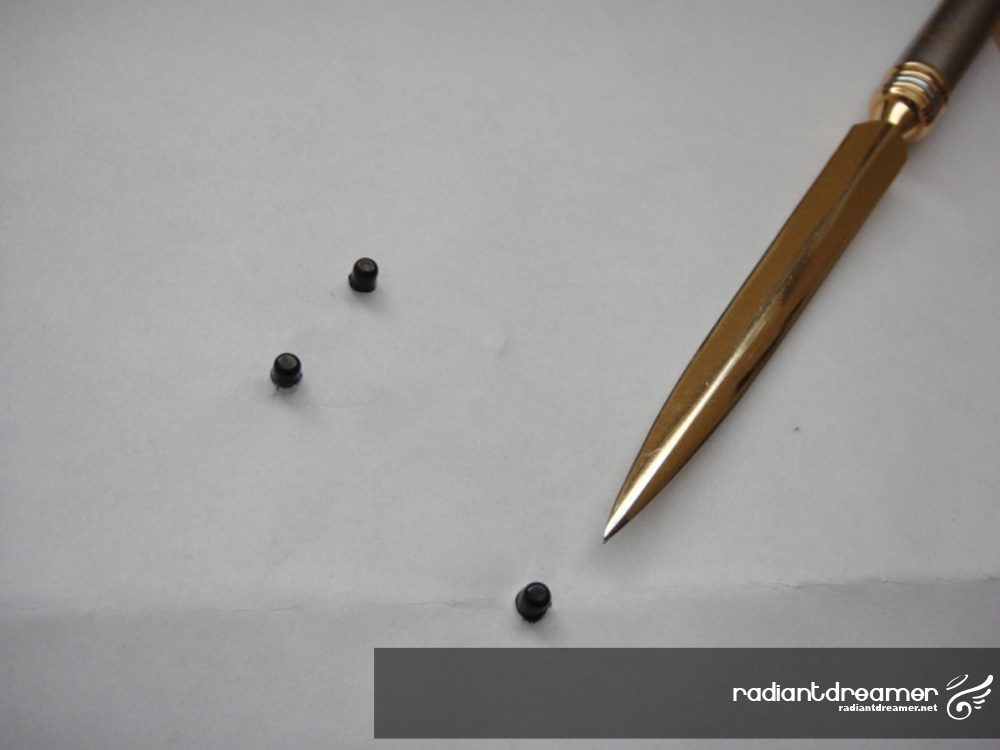 I then puncture the holes using a sharp object, and place the sheet of paper on the base to test for the correct size and distance. 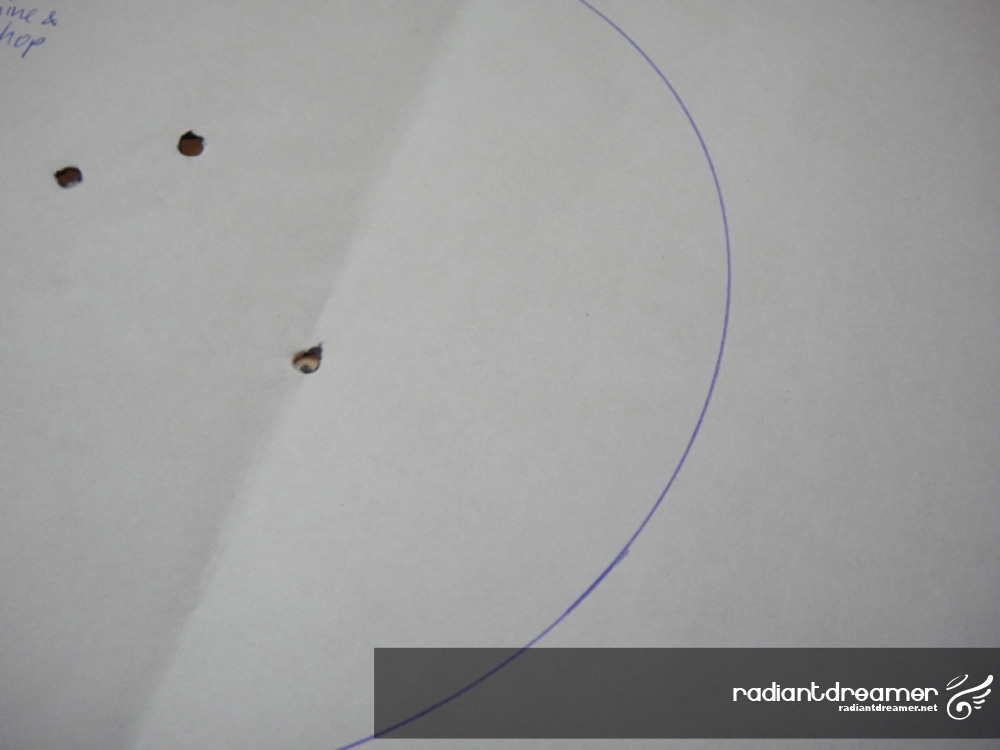 With the base still attached, I trace the outside of it onto the paper. This is so I know the reference point of the base size. Keep in mind that you’ll be a couple of mm bigger by doing this. Also keep in mind that this is the underside of the paper. 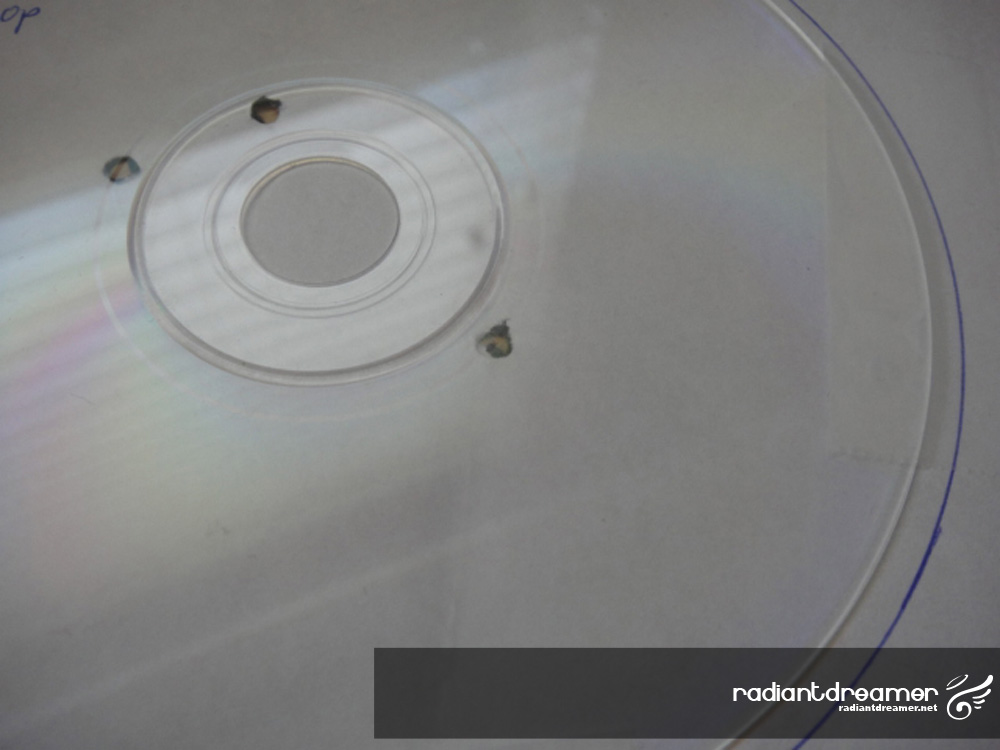 I place my CD on top of the sheet of paper, and tape it down. I wanted the beatmania word to still be visible, so I used one of those plastic cover CDs. It has the same rainbow finish, but is clear. 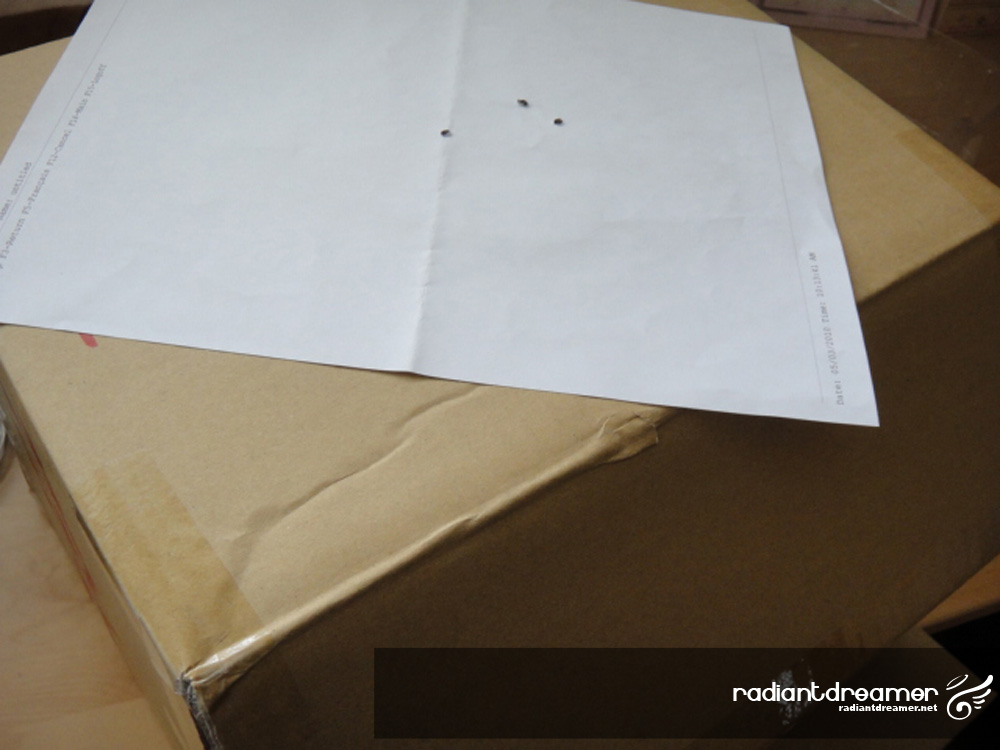 I flip the paper over, and place the sheet on top of an empty box. DO NOT drill on your table! 😛 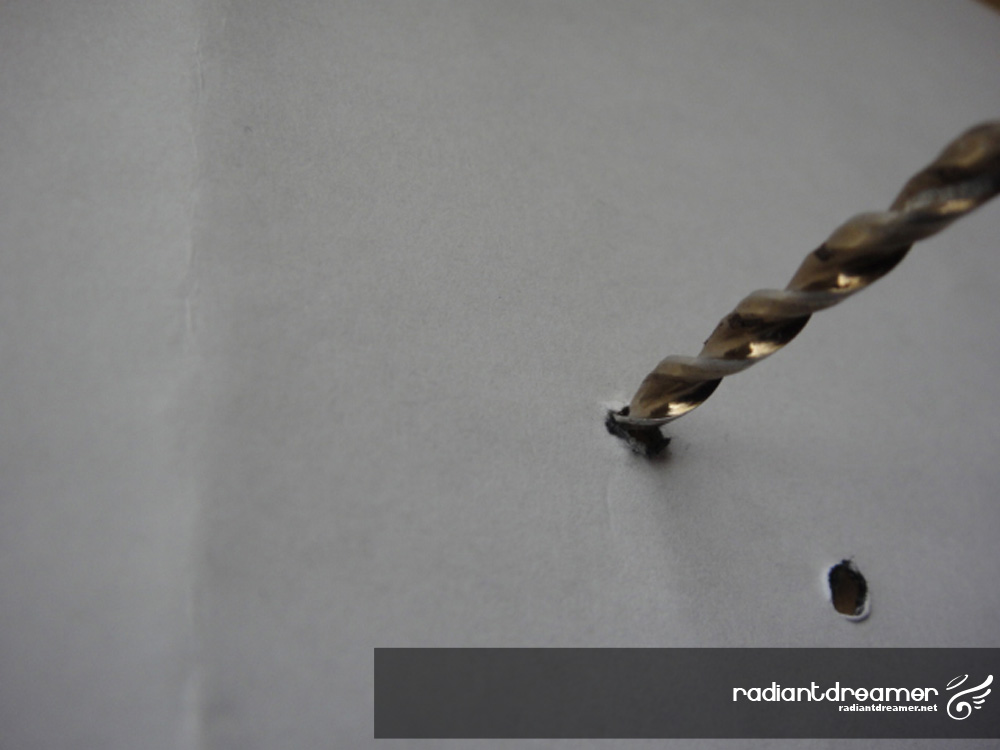 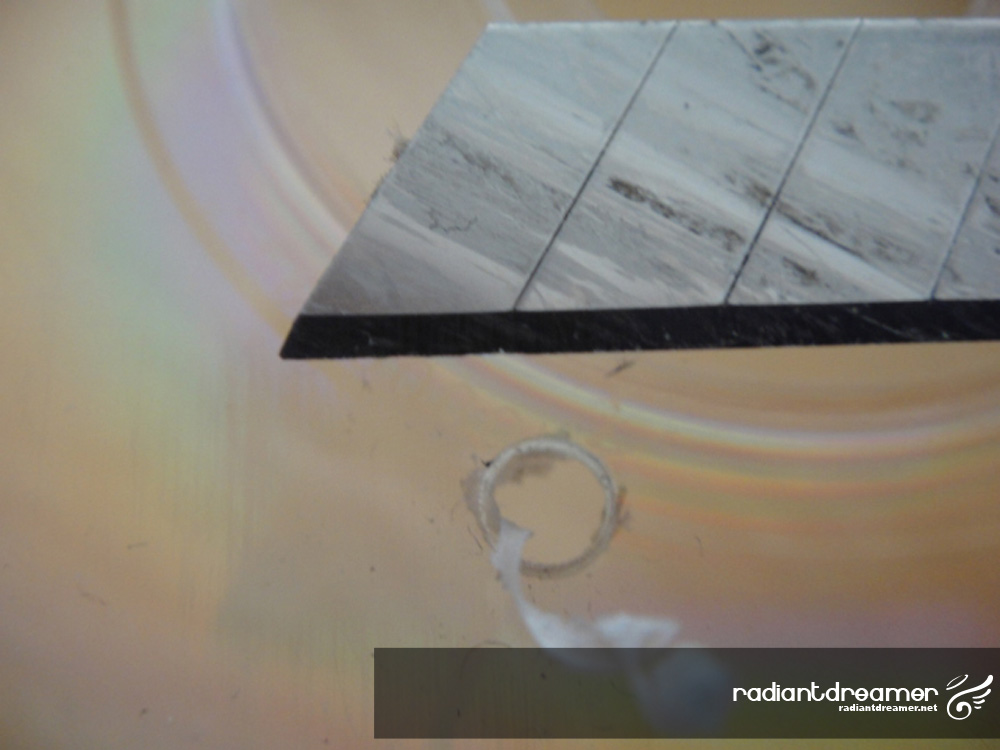 Using a pen knife, I cut away the excess material. Just spinning the blade around inside worked pretty good. 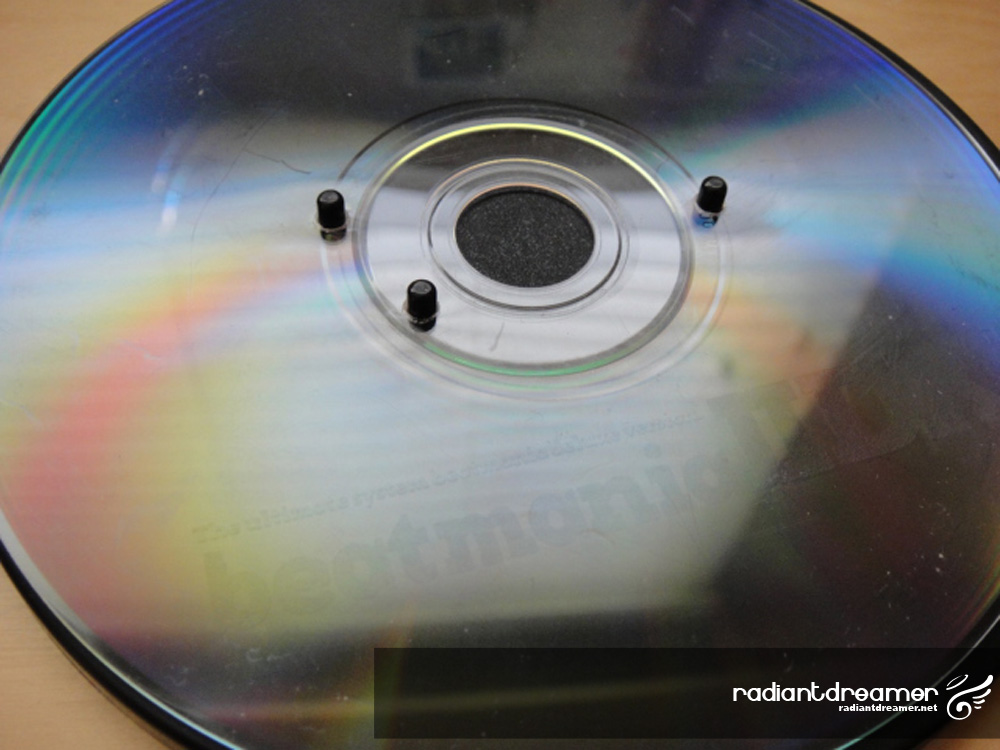 CD is placed on top. This process took all of 15 minutes. Keep in mind that the CD thickness means there is less peg to hold, so your base may fall off easier.

If you want to make a brand new base, you can do the same technique using a wood or plastic base. You mark the sheet of paper on the figure instead of the base, then you make your own custom pegs, and away you go! 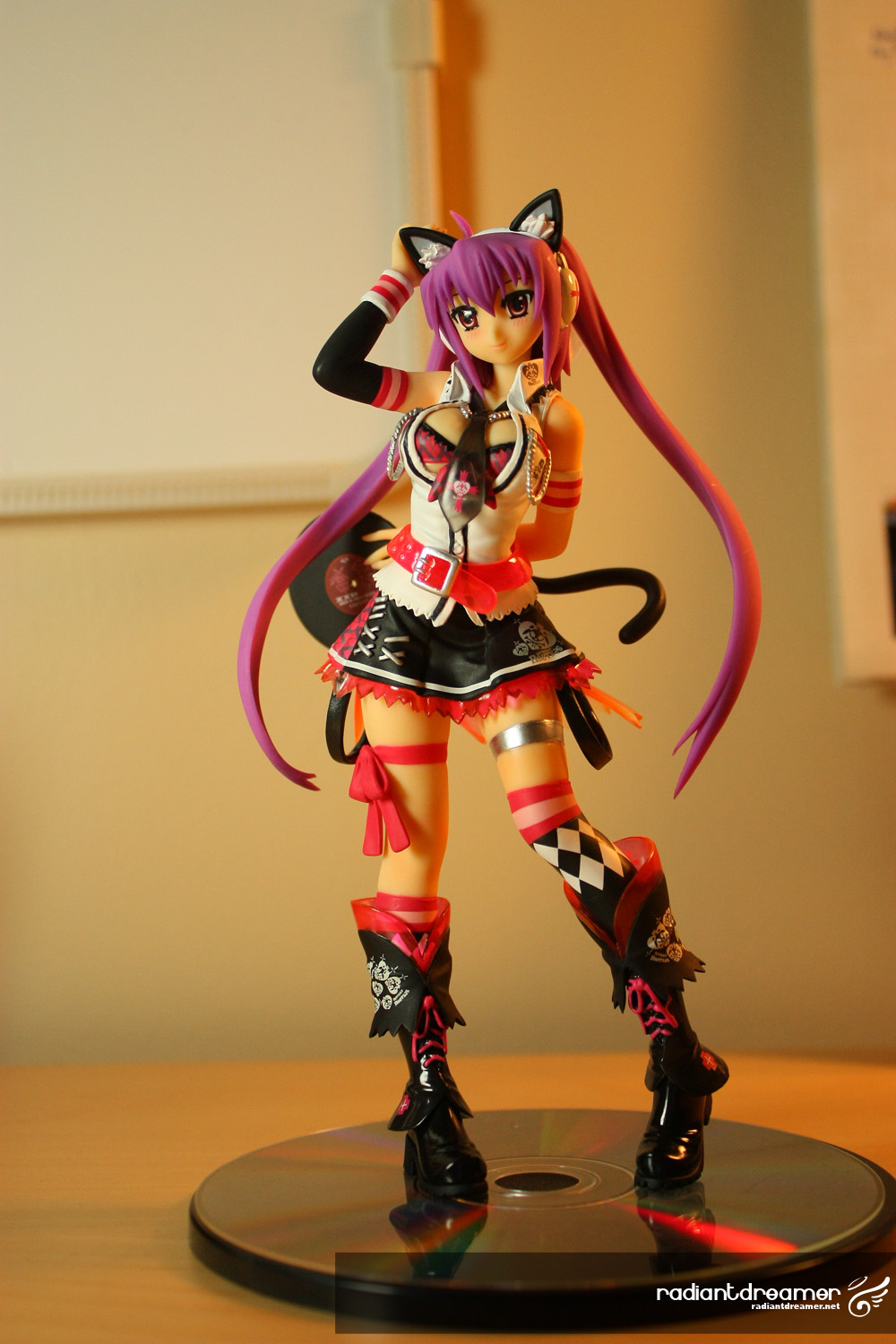 And here she is! I took some shots, but since Lyli put up a fantastic photoshoot already, I’ll just post some real close-up shots so you can see the details. Do check out her post though! 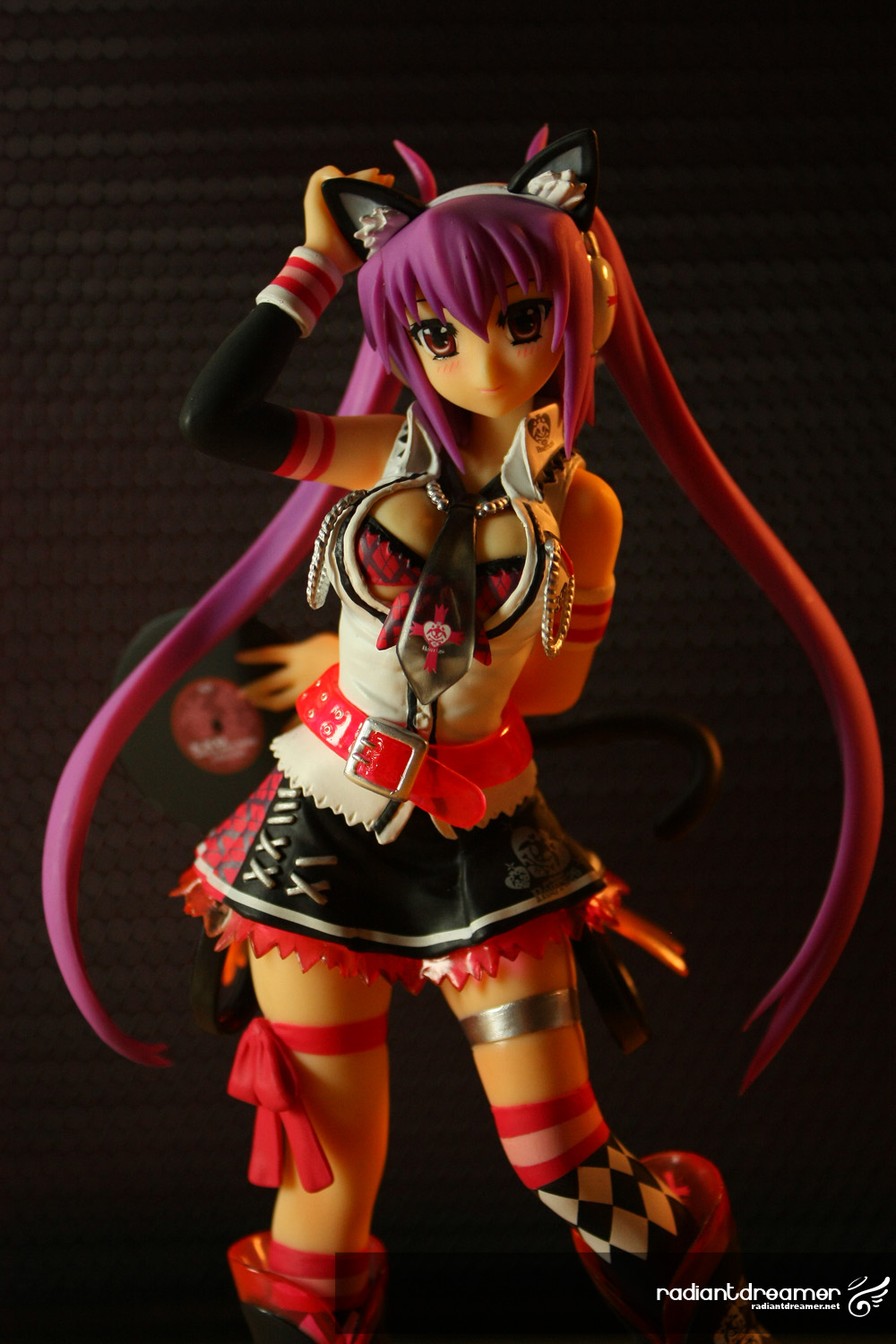 I really like Celica. Nekomimi visual kei goth? With heaphones? YES PLEASE! I can’t believe I had let her pass the first time. 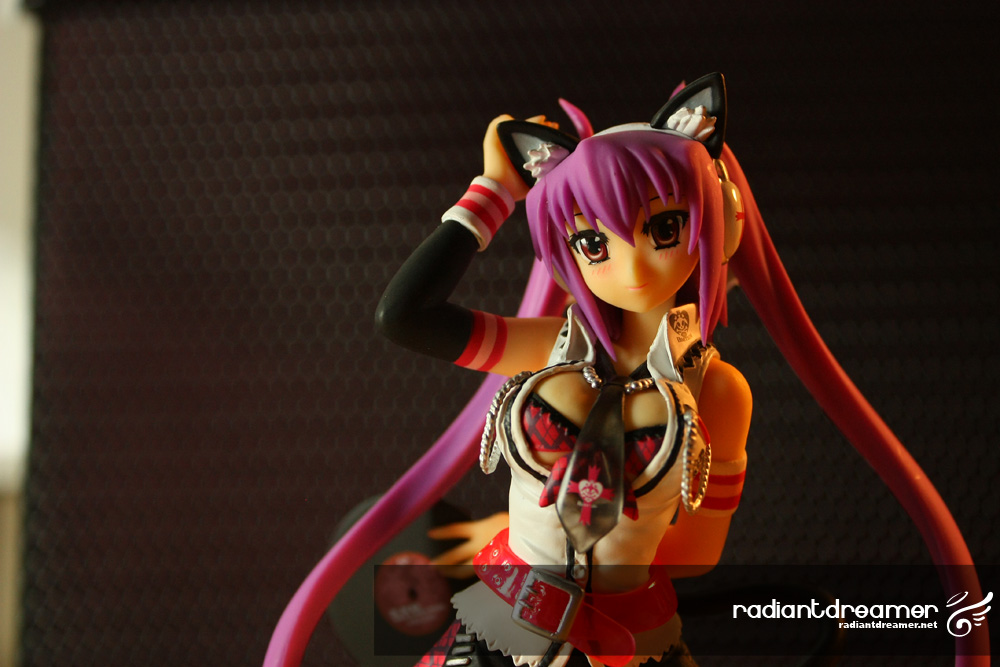 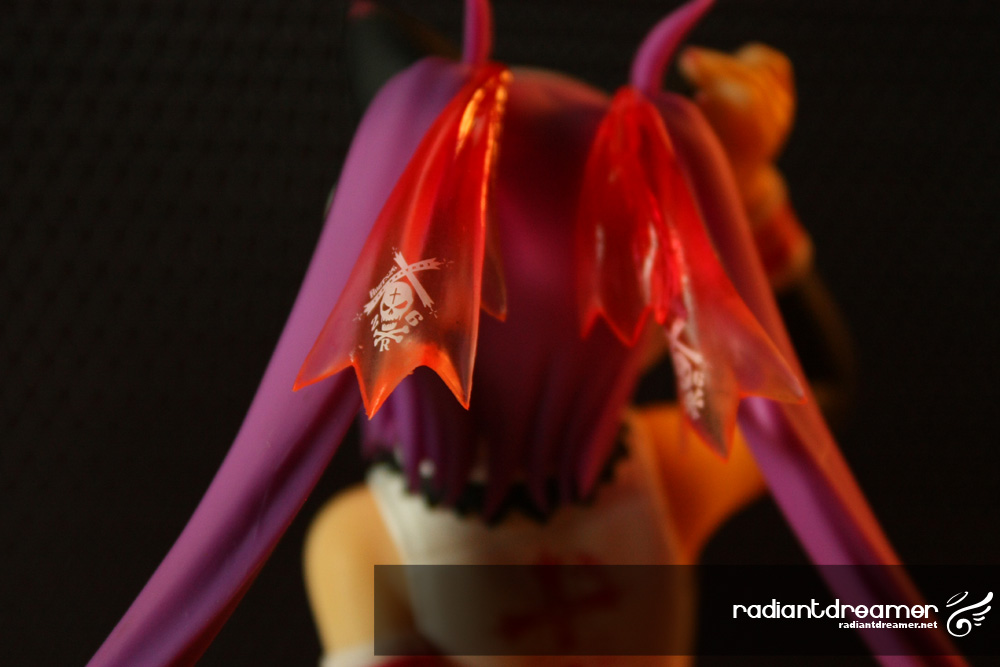 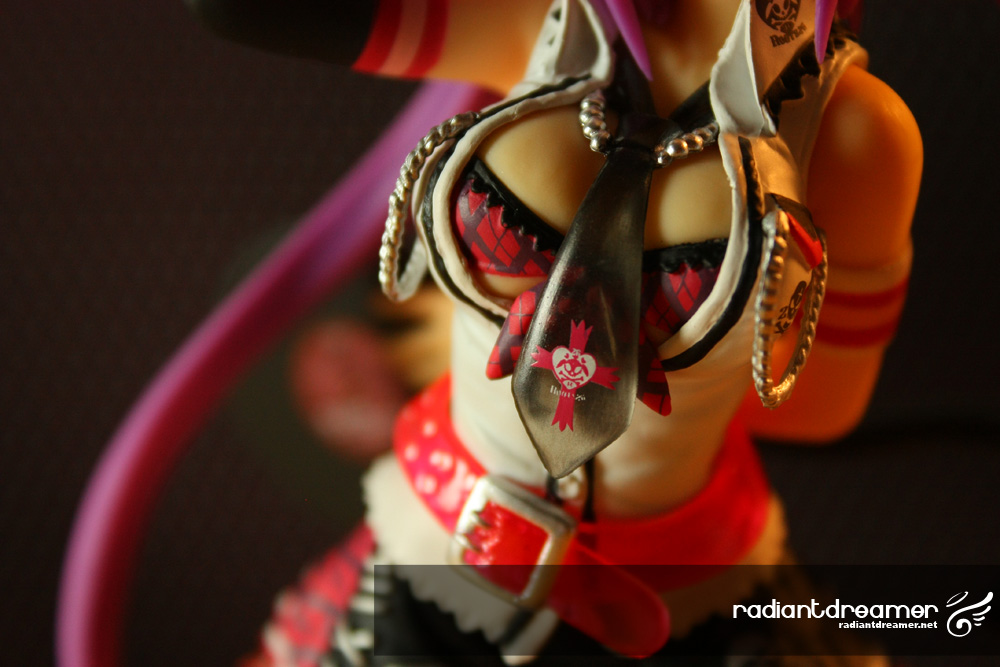 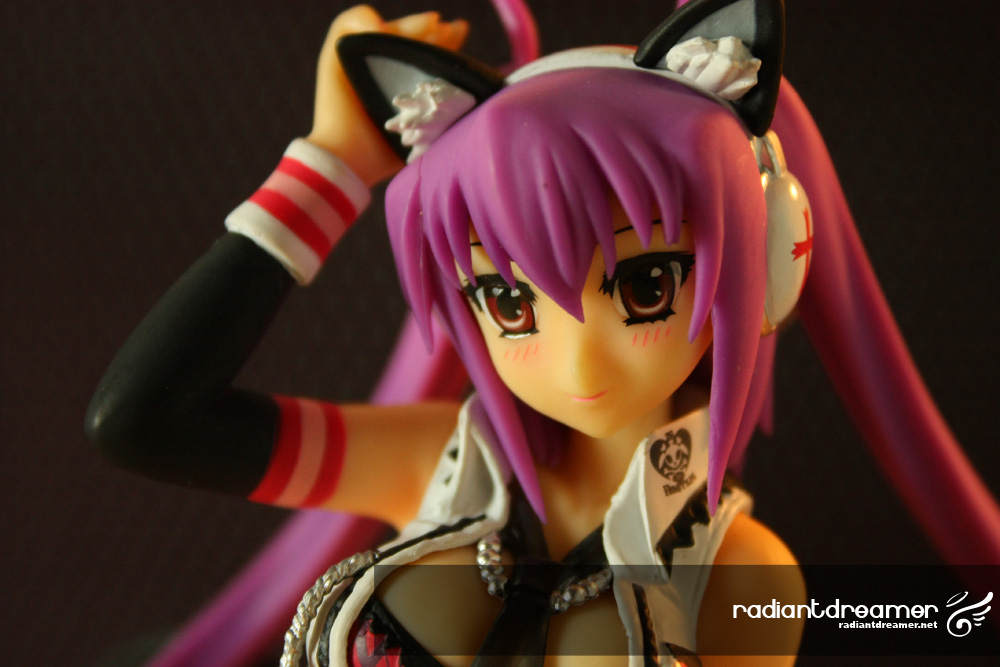 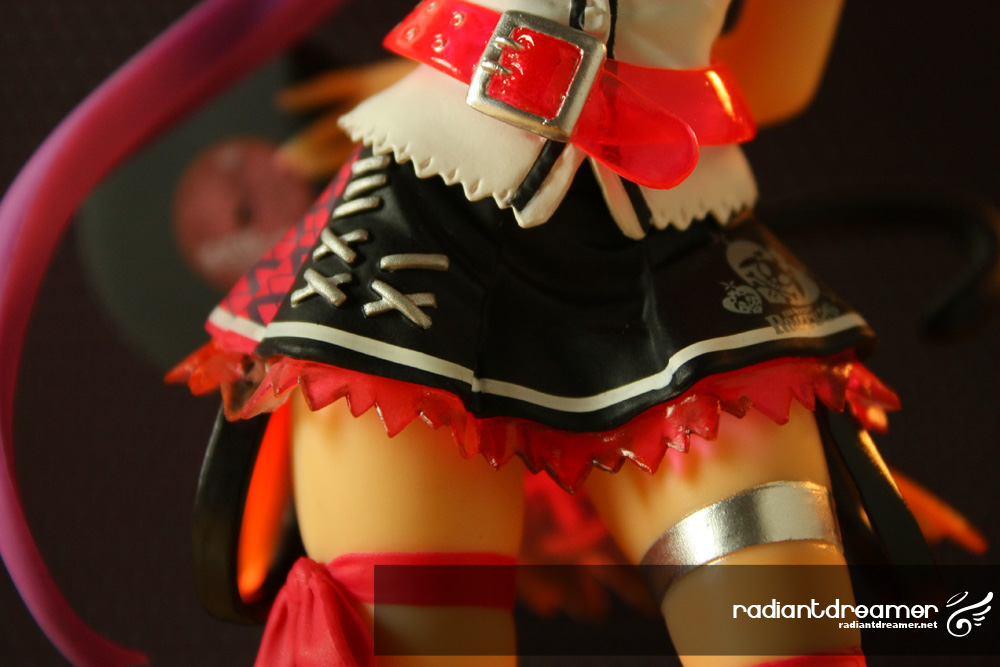 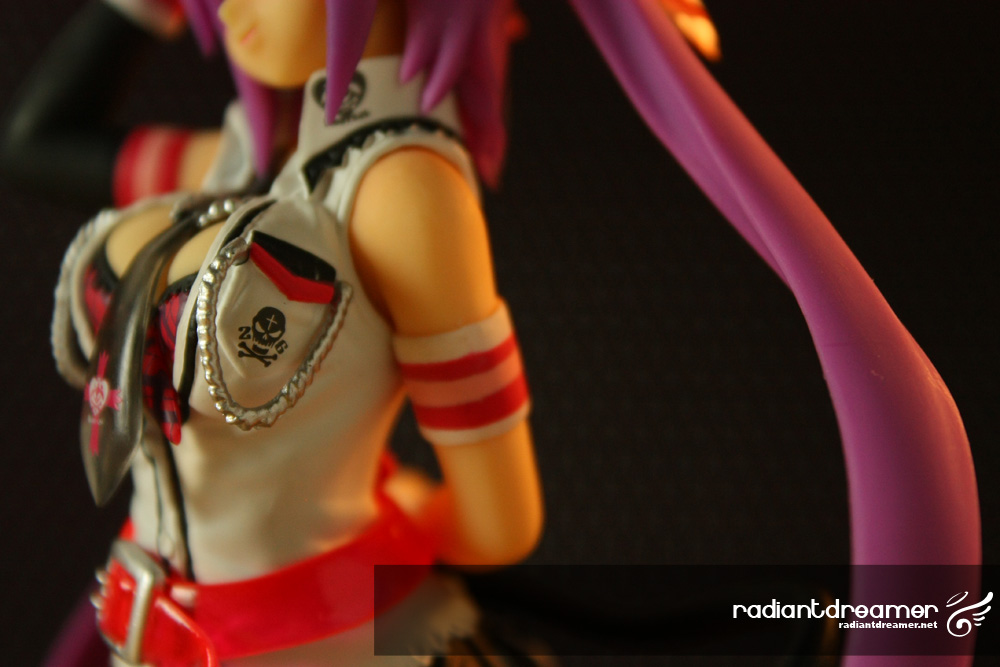 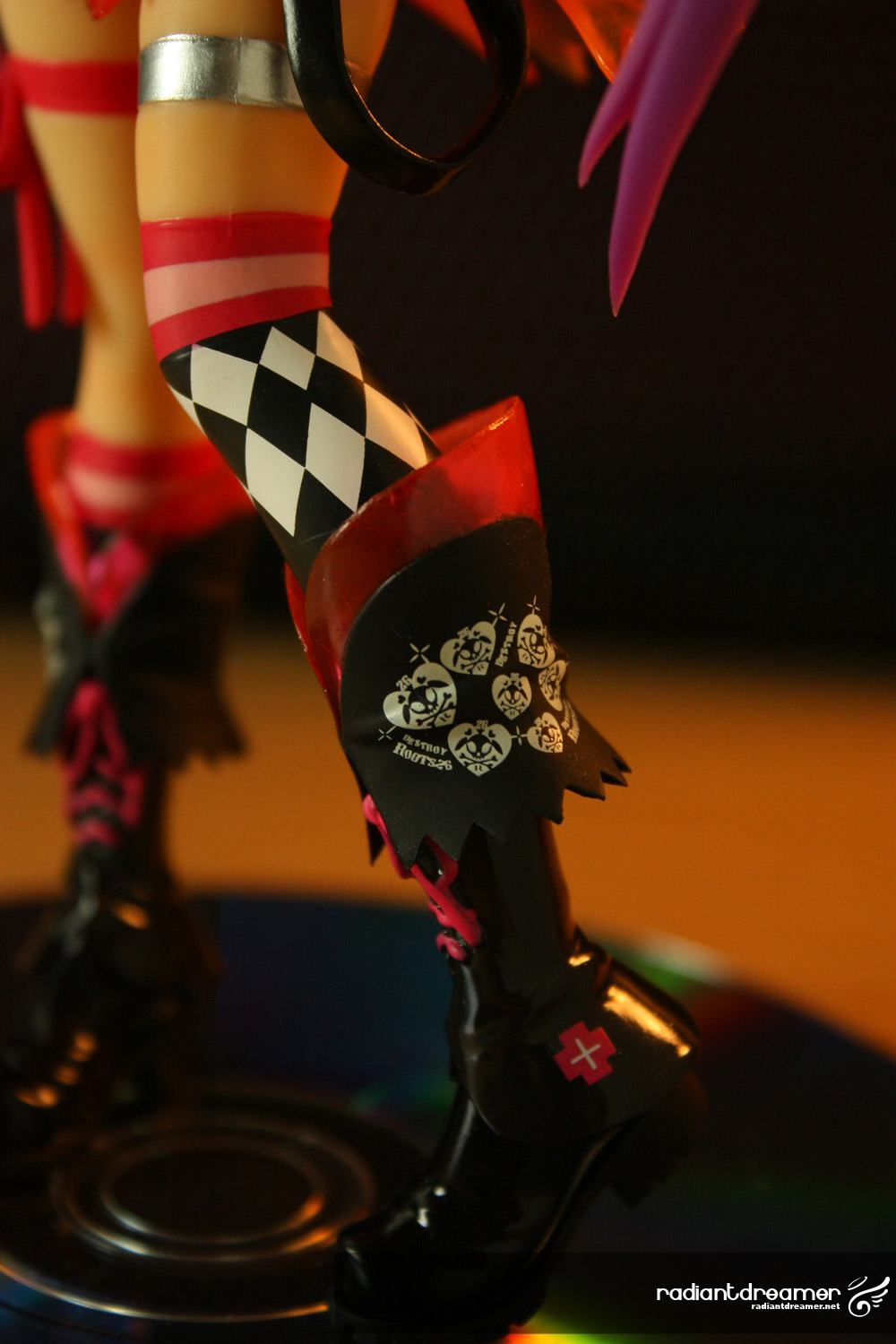 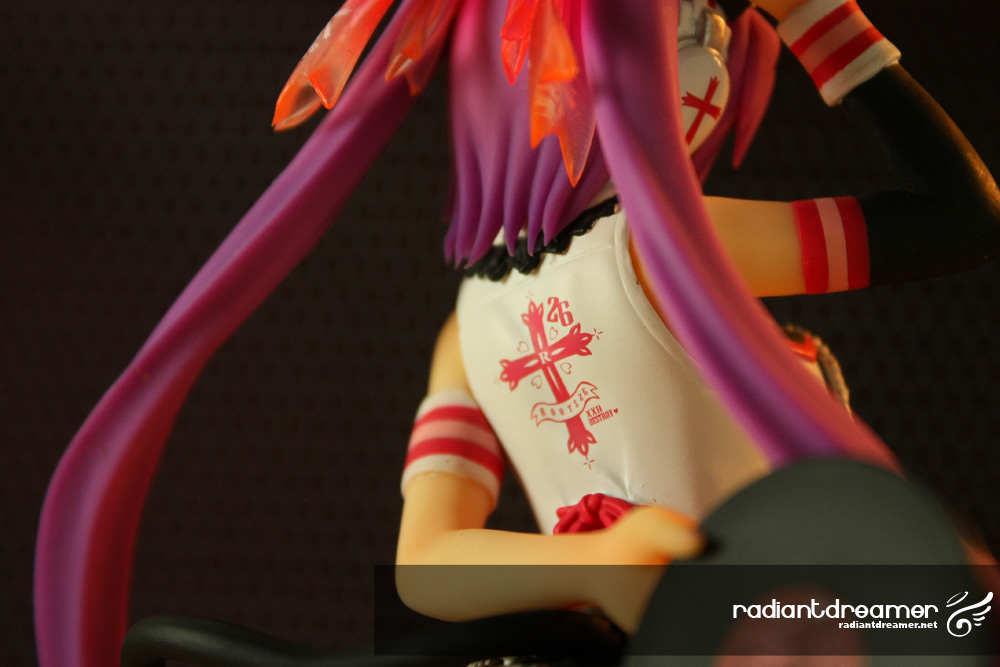 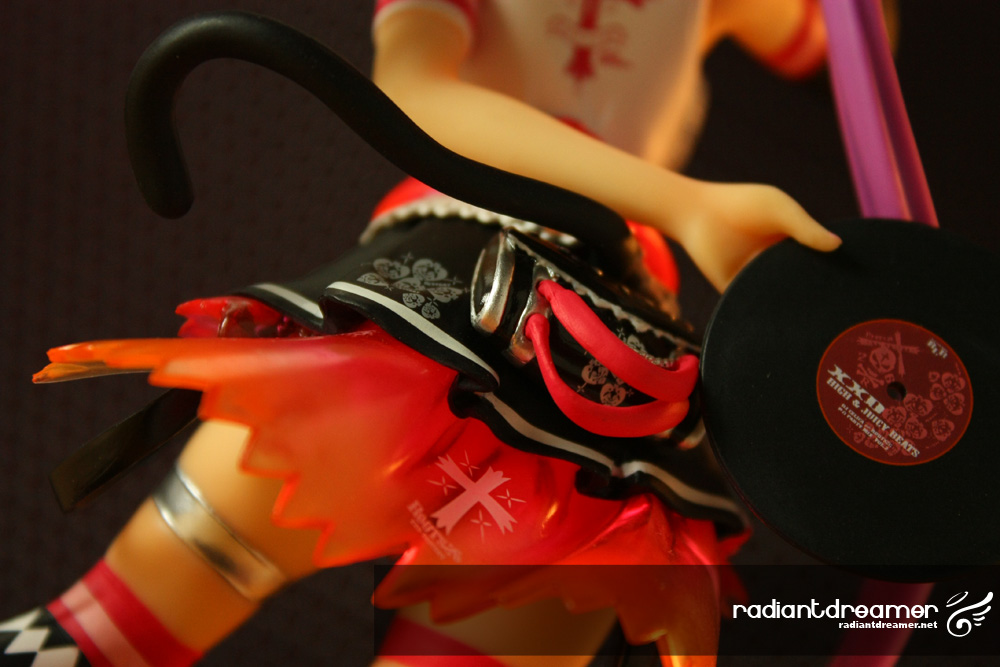 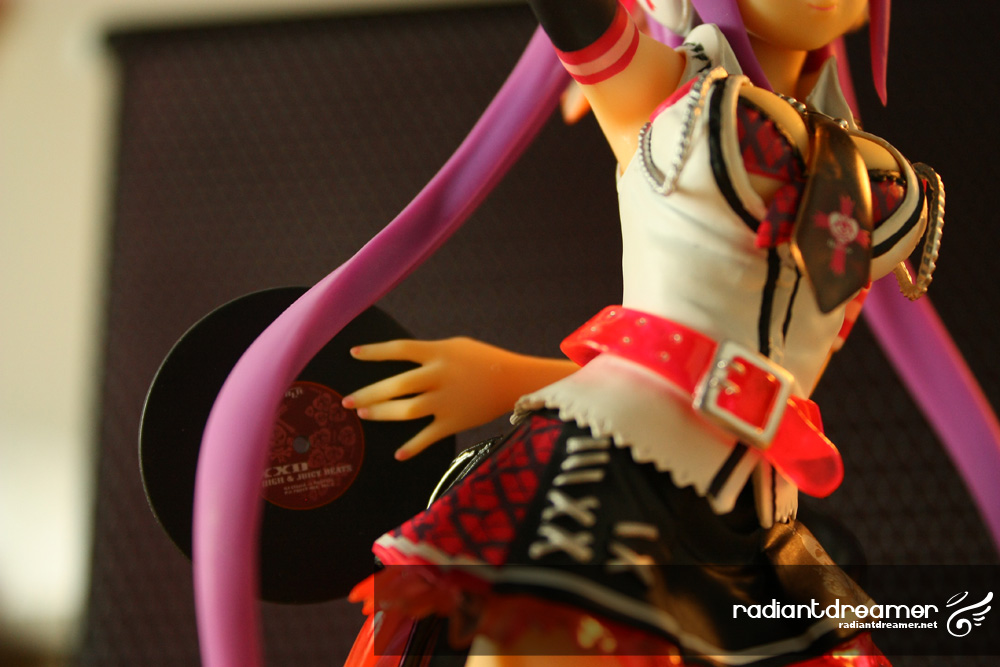 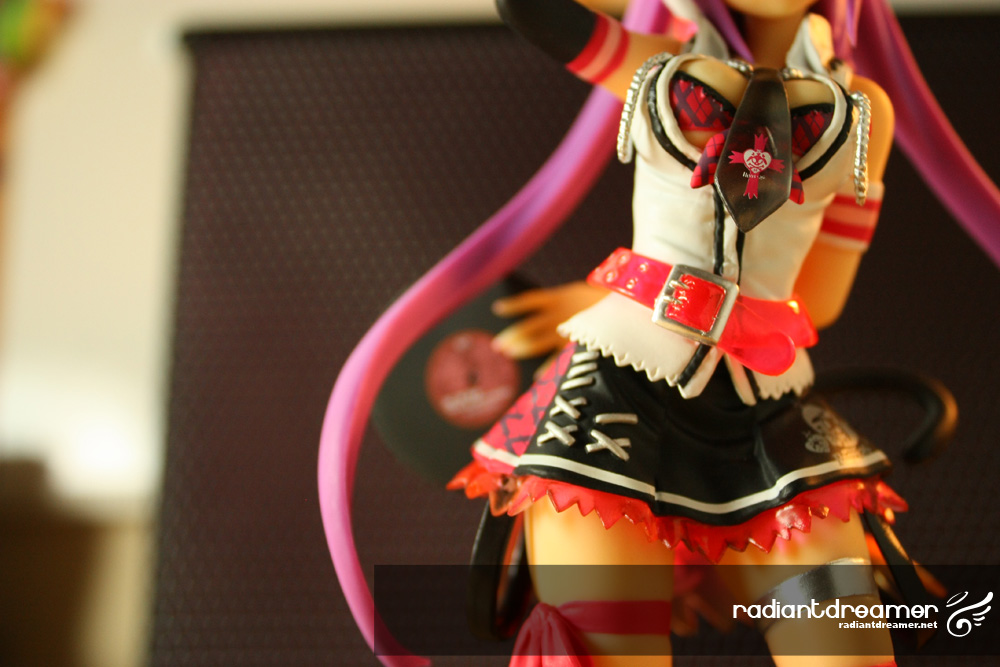 One thing I will note is that the PVC material they decided to use is of lower quality than that of GSC, Alter, or Max Factory. The pigment is somewhat translucent (akin to trading figures). What I mean is that light refracting into the PVC makes it colorize a little bit. It’s not as opaque as say, Max Factory Ignis for example.

She’s also a little bit small for a 1:8 scale figure… almost an inch shorter than most. The detail is amazingly well done though, there is a lot of intricate parts here, and the clear PVC looks awesome. Especially for the dress and the belt.

Hope you like the splash image. If you guys want a wallpaper of one of these images in similar treatment, let me know. 🙂

I create stuff in my mind, and try to barf it out onto tangible mediums such as Photoshop, and video game art. Sometimes, I get paid to do it because I'm a freelance artist working in the video games industry. Getting paid to do what I love (video games, and art) is my dream come true!
Nostalgia, and my iPhone game
Figure Care – Dusting, Cleaning, and Leaning!