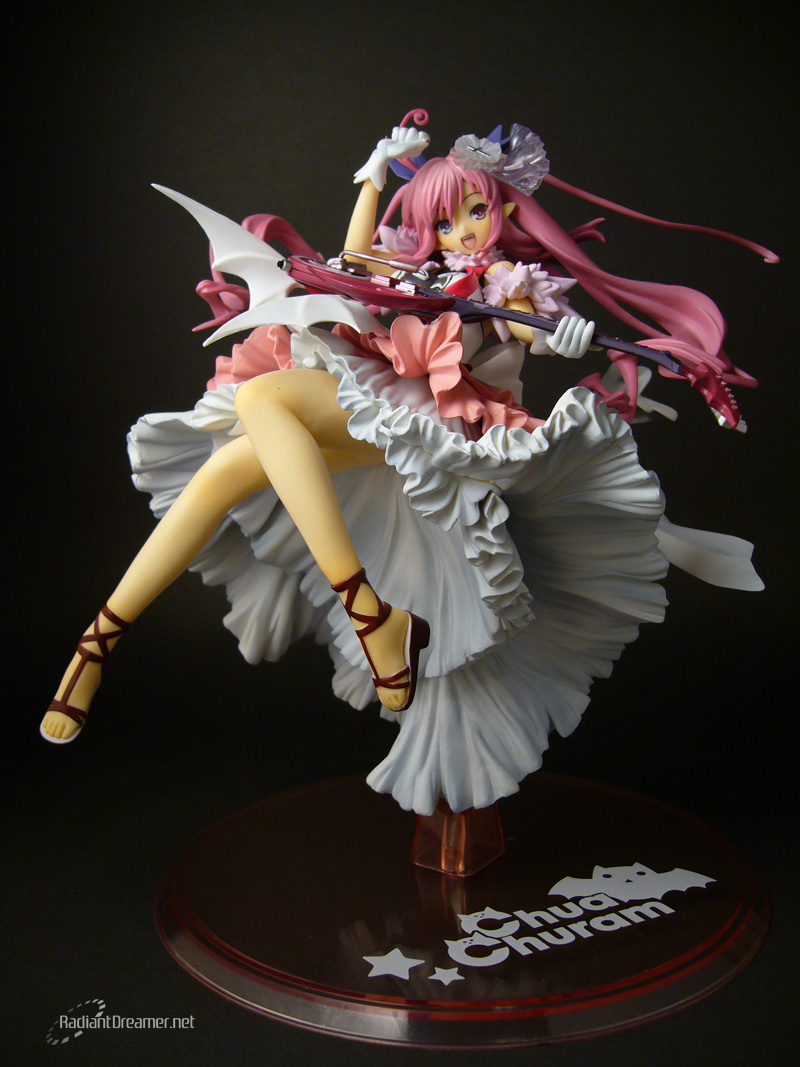 My latest arrival is Chua Churam from Chu X Chu Idol. I know nothing about the series (if it even is a series) but I knew I had to have her when I saw her. The flowing dress and everything was just too exquisite to pass up. She is, in fact, the reason why I sold Ignis the White. I figure that having one or two flowing dress figures is enough, so something had to go. I must say, I am happy with that decision. 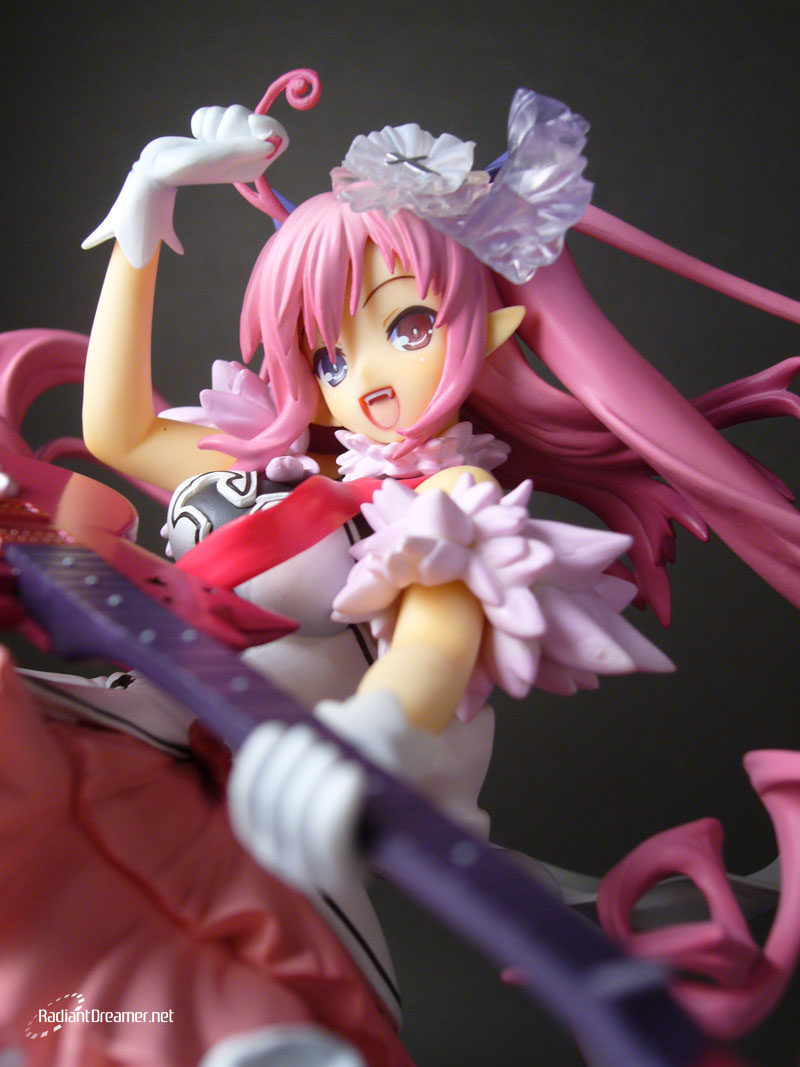 She’s quite the cutie! The little fang teeth really add a bit of personality and unusualness to the otherwise generic big mouth smile. The different colored eye has been overdone many times, but is actually quite subtle in this figure. They are the same shade, but different hue. 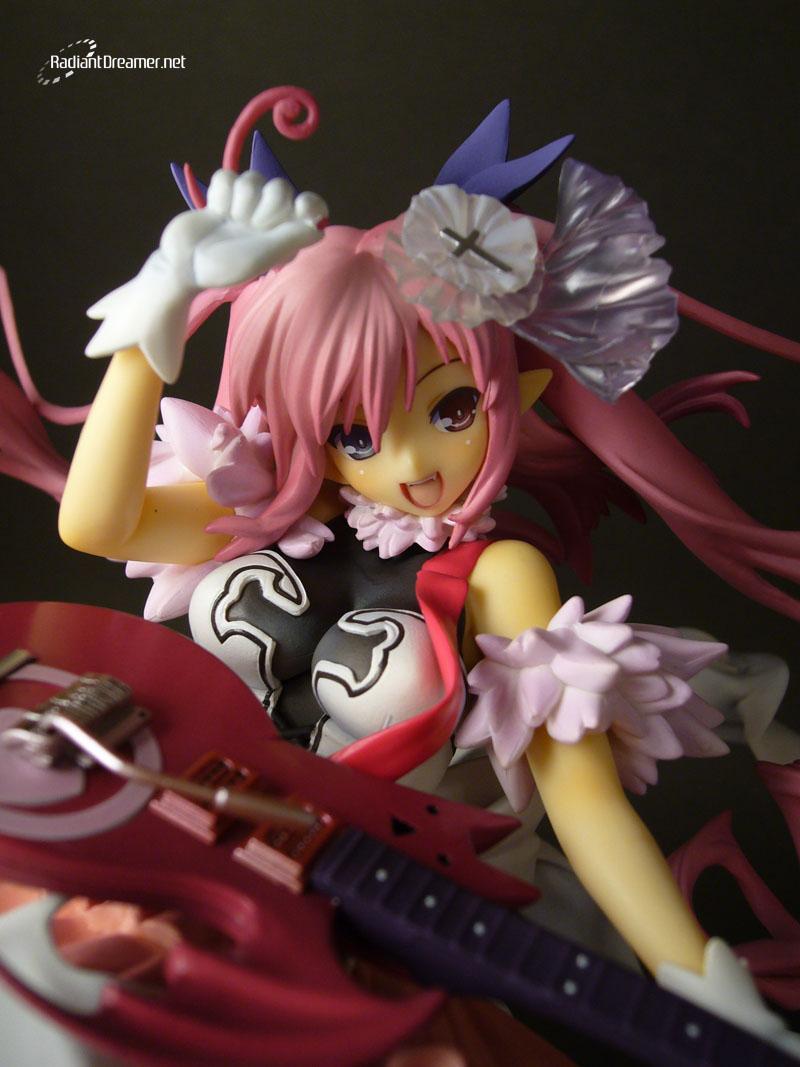 I love the ribbon in her hair. It’s semi-transparent. The glossiness of it is quite nice. The silver cross looks a little bit out of place aesthetically. It works with the theme though. Her cheeks have little white dots! Notice how the eye colors blend in so well? 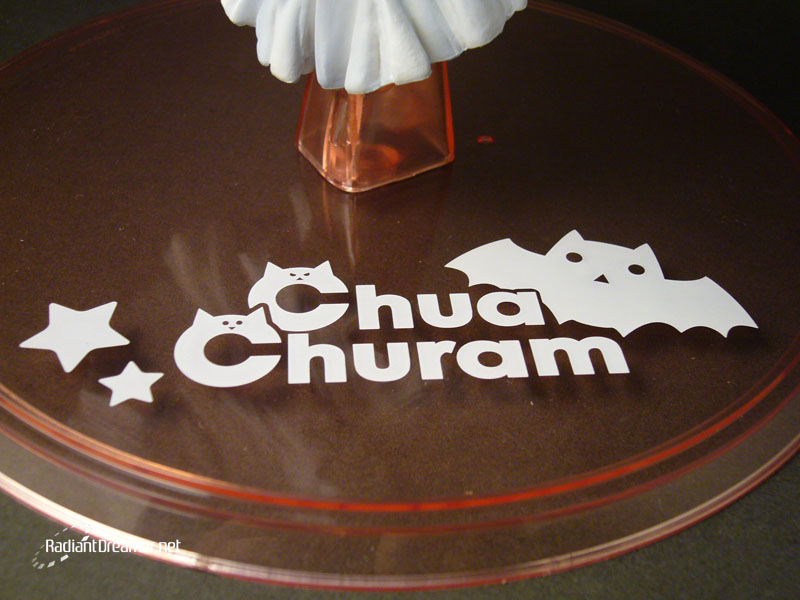 The base. The text is very cute, and cheerful. It matches well with the pink color, and is very clean. 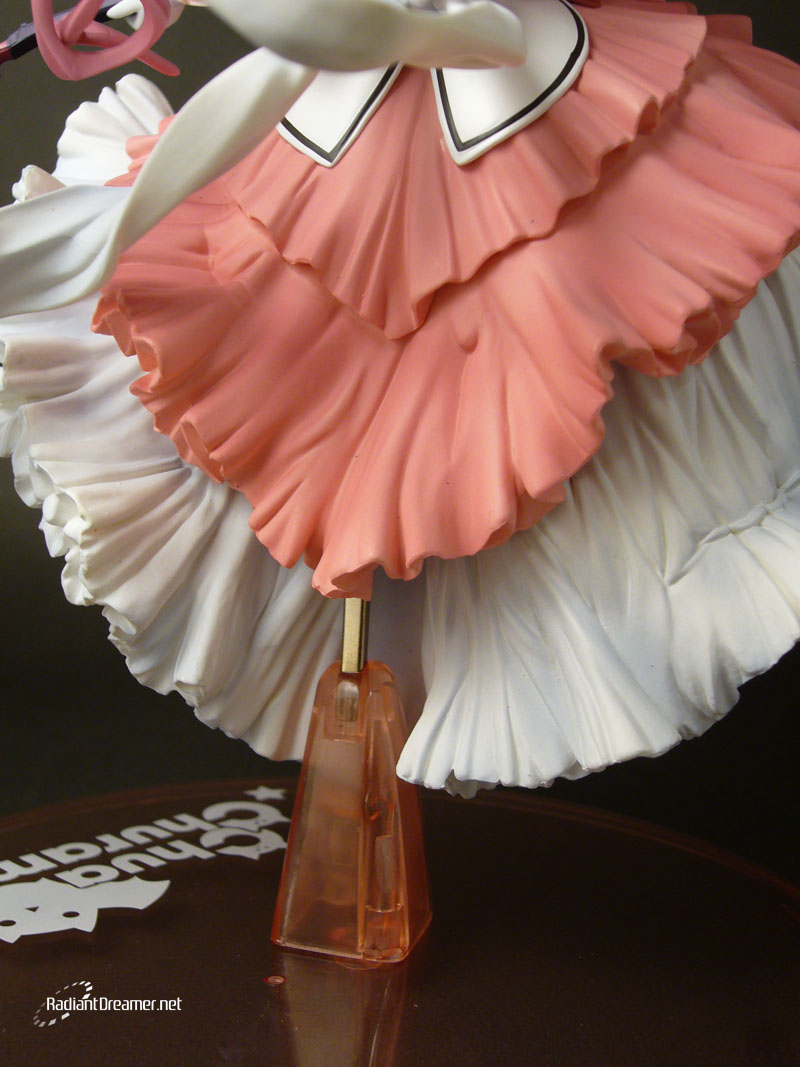 The back of the base. The dress flows so low that it covers most of the base, making it very subtle. The steel rod is square, so it won’t spin around, and is VERY sturdy. It inserts into the plastic part only slightly, making it easier to remove if need be. The plastic part is then attached to the base itself, which is also easy to remove. It’s firmly inserted, so has little chance of falling over, but I would say that the attachment between the rod and the base is the weakest link. 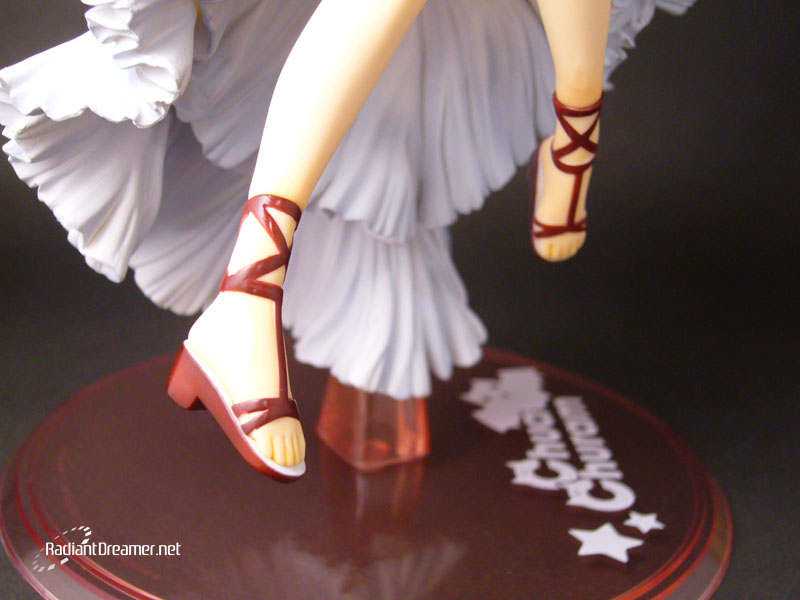 Feet. If that’s your thing. Not exceptionally detailed in comparison to the rest of the figure, but still detailed nonetheless. Every toe is carved out quite nicely, and even tucks underneath to give it more depth from the sandal itself. The straps are pretty generic. 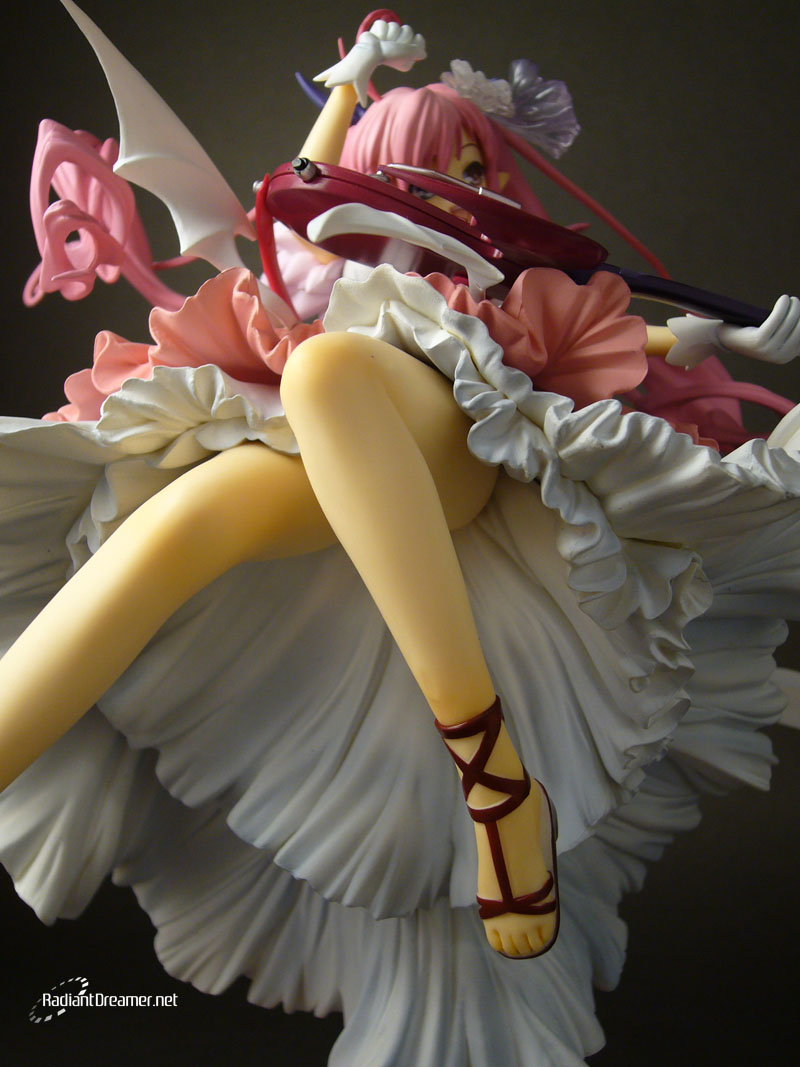 An upskirt shot! Sorry, no pantsu for you! You’ll just have to buy the figure if you wanna see it that badly. What I do want to focus on is the ruffles. There are A LOT of them. This figure is ALL about the ruffles. I do wonder how long it took to sculpt all that. 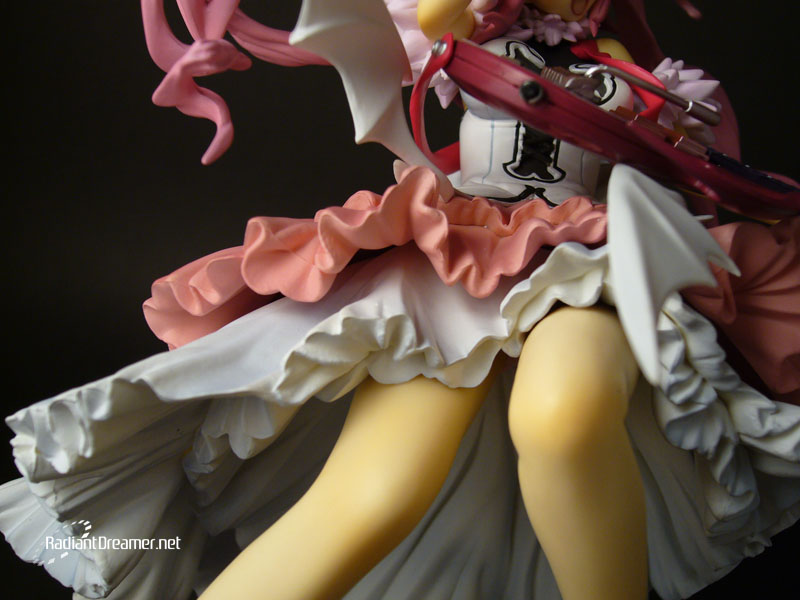 A shot of her legs. From the shadows, you can tell there there is some sculpt detail in it, but not a whole lot of definition. It’s kind of got this Japanese girl legs look to it (a little plump, so you don’t see the knee caps clearly), but slim. It’s a bit surreal, but looks nice. 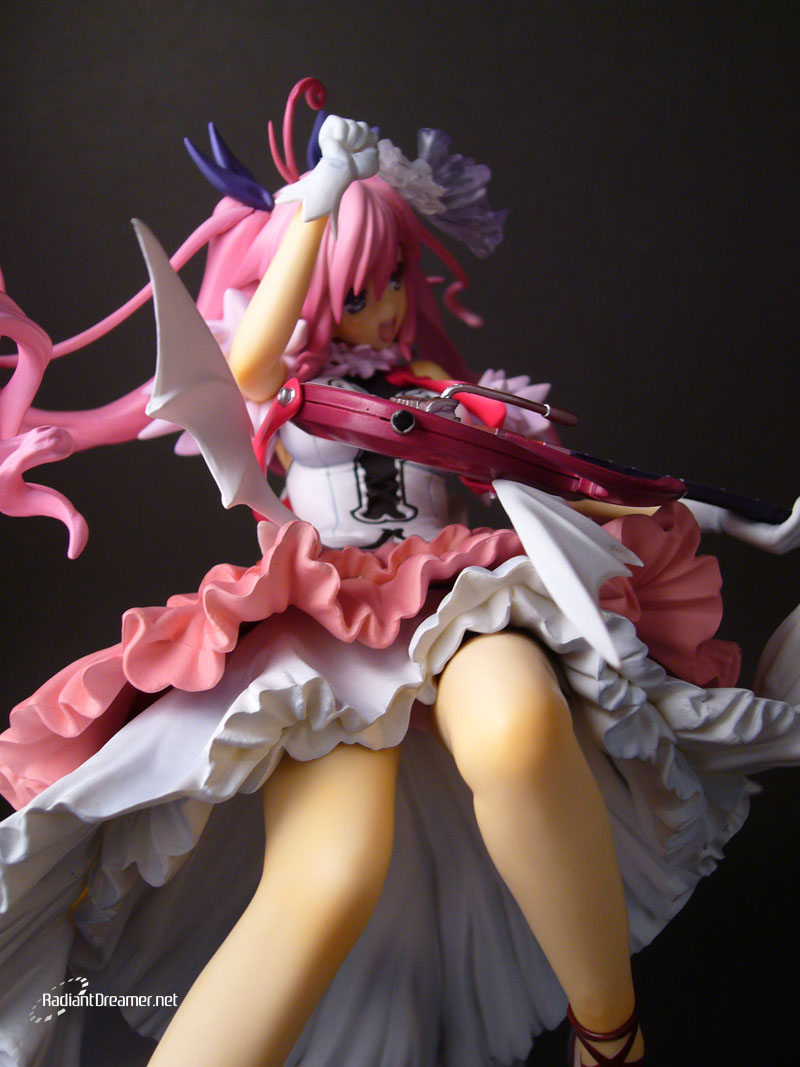 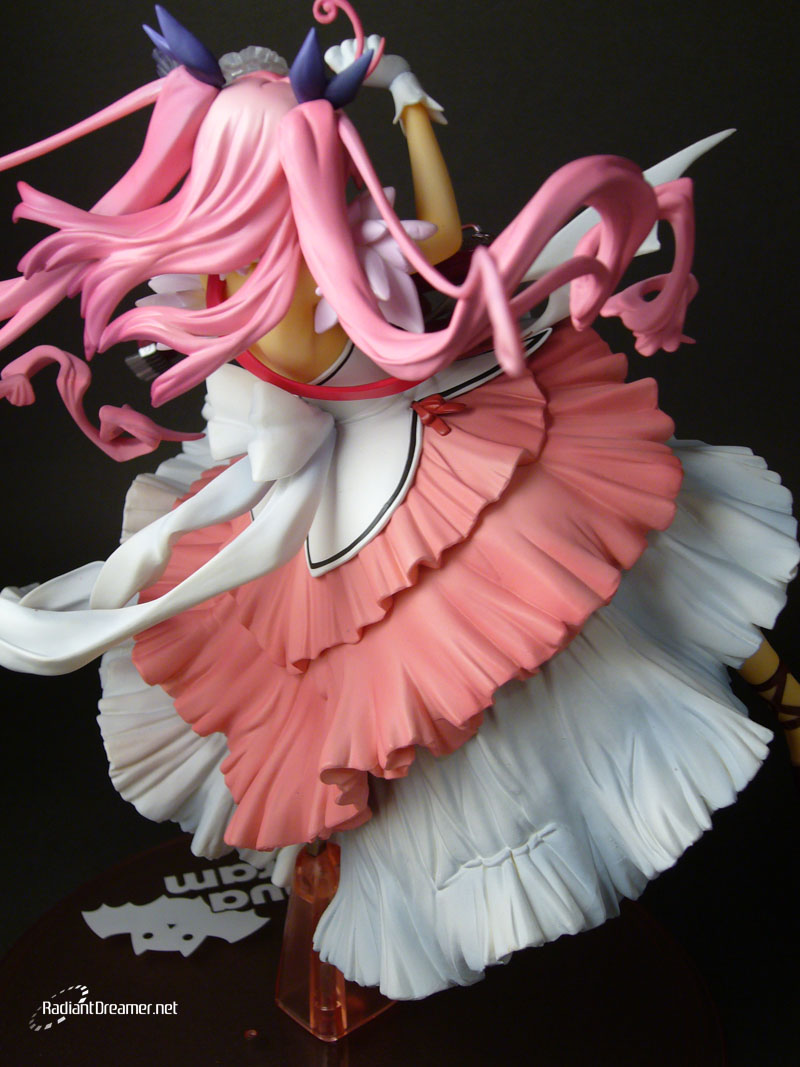 A view from the back. She has a really nice bow. As you can see there are three layers to her elaborate dress. You’ll even notice the crease on the right hand side of the white part, where the fabric is bending! Her hair flows everywhere too! Very nice! 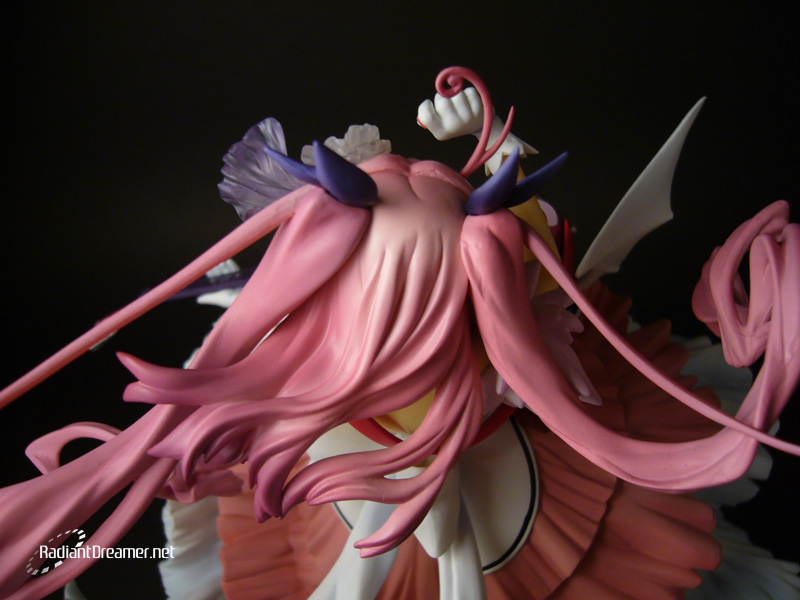 There are a few ugly flaws in her hair, but it’s really not all that noticable, since it’s all in the back. Still, quite elaborate for what it’s worth. 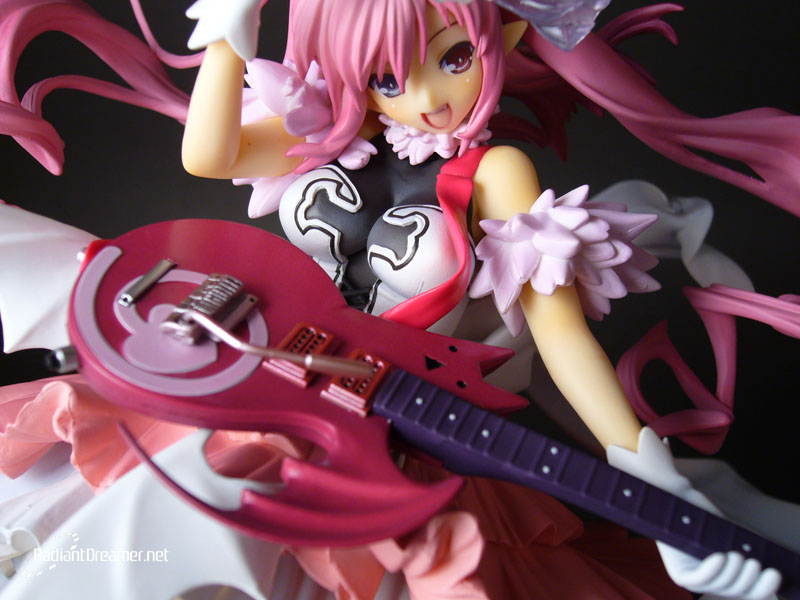 A close up shot of the guitar. As you can see, there is a lot of detail in it. It’s also pretty accurate too. The whammy bar is there, the bridge, strum, everything is in good detail. I do want to attempt putting real strings on it, and it does look like the option is there for the hobbyist. Unfortunately, the guitar is firmly attached to her and can’t be removed, making it much more difficult to accomplish the feat of adding strings. 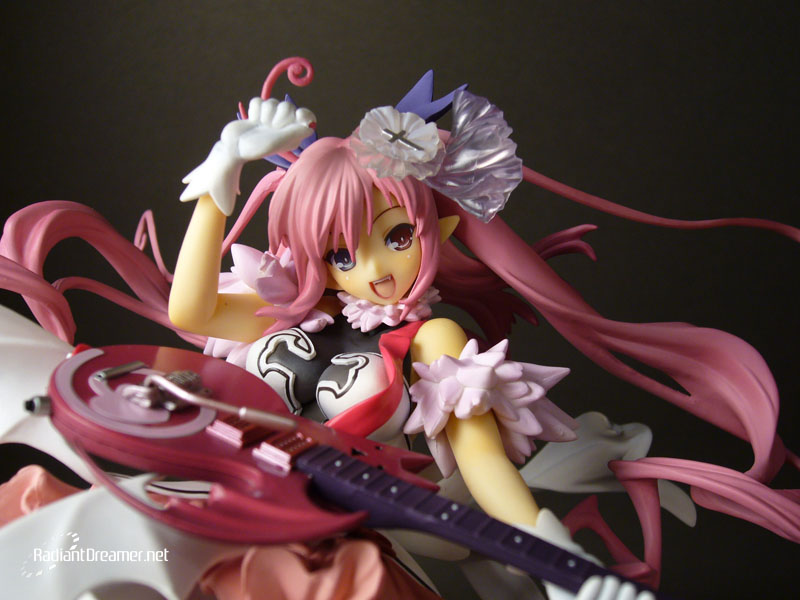 The fluffy fur thing around her arms are interesting, but not very likable. It just looks spiky rather than furry. It would have been nice if they actually did use fur there.

One thing I will point out which I feel is a flaw – outfits like that, no matter how tight, do not conform around and between breasts. 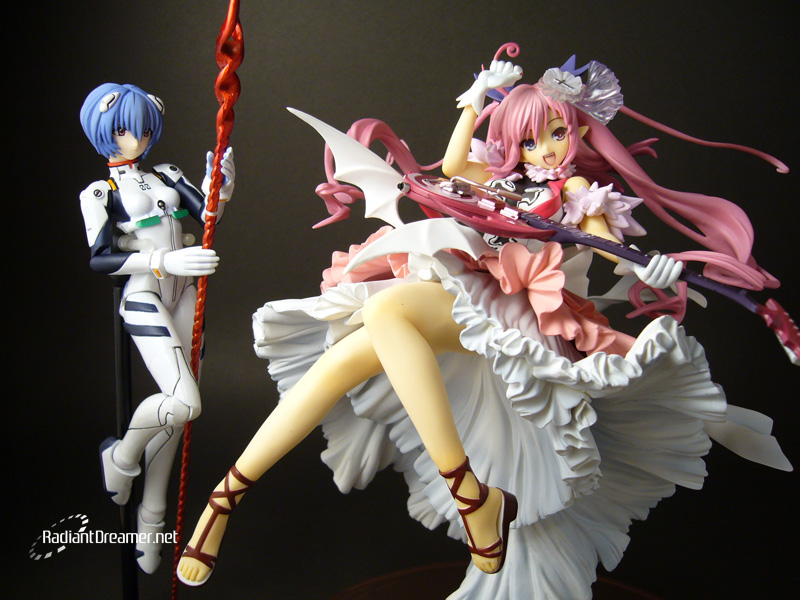 From the photos and prototype images, you may believe that this is a pretty large figure, especially with all that detail going on. Truth is, she’s not all that big at all. She’s actually smaller than a typical 1/8, so she’s more like a 1/10 scale. To give a sense of scale, the average Fraulent gives a pretty good idea of how tiny this figure is. That is A LOT of detail to cram into such a small figure.

Enjoy! Until next time!

I create stuff in my mind, and try to barf it out onto tangible mediums such as Photoshop, and video game art. Sometimes, I get paid to do it because I'm a freelance artist working in the video games industry. Getting paid to do what I love (video games, and art) is my dream come true!
Nendoroid Gamers!
30,000 hits! yay!