How To Mount a LACK Shelf

Sometime last year, my wife was complaining to me that our “guest room” was in fact, a storage room, and the den was crazy cramped. Basically, we had a giant L-shaped desk in there, storage units, AND an exercise machine crammed in there, while in the “guest room”, we had a crammed queen sized mattress, surrounded with our storage items with no room to move. All of my art books were in the bookshelves in that room, away from the den. Not the most convenient setup.

So I took the hint, and we swapped the two rooms. Now, both rooms are functional, and a lot of clutter was removed. 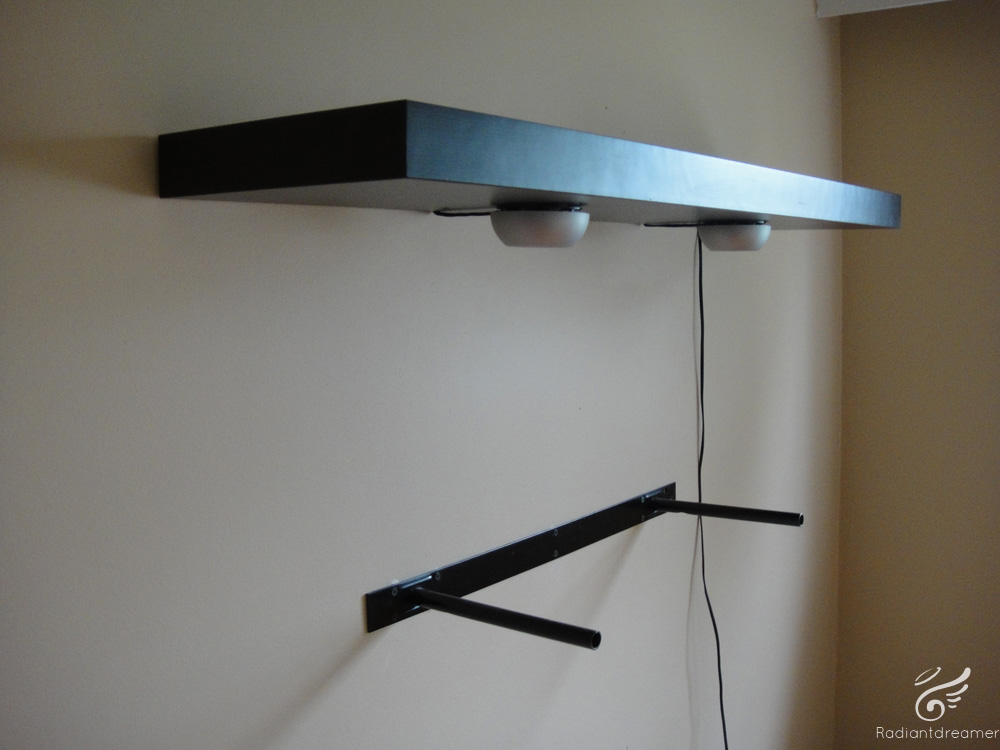 I also had two Ikea Lack shelves in the den that needed to be removed, and re-mounted in the other room.Today, I’ll  be talking about how to mount a Lack shelf, obviously for the purposes of displaying anime figures! (was there any other reason?)

Lack shelves are very nice, very cheap, and very versatile. They come in various colors, so for sure it can make the statement you want. You can also mount under-mount lights to them with absolute ease. The dangling wire option was something I debated about – have it hanging free, or fish it through the wall? Aesthetically, fishing it through the wall would have been better, but it wasn’t worth the effort, or the damage it would cause in my opinion.

Lack shelves come in two parts – the metal mounting frame, and the wooden shelf that slides right into the mount. The versatility comes if you want to change the shelf color – you don’t have to remount anything! 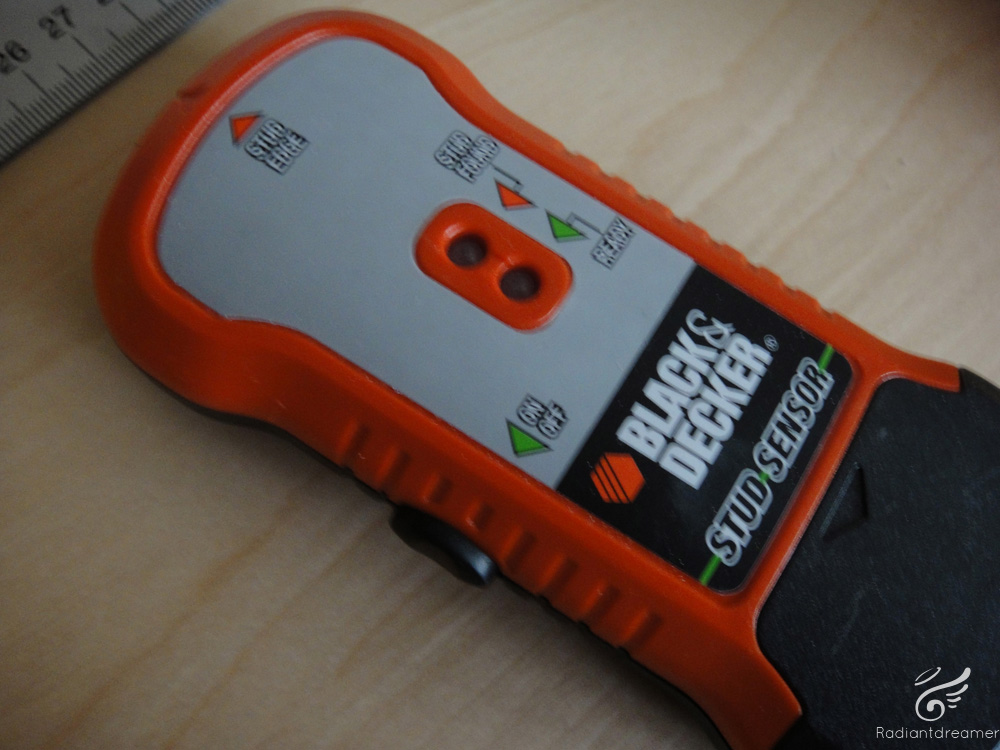 This is a stud finder. It beeps every time it scans me. har har har.

It’s absolutely imperative that you mount the shelf to at least one stud. A stud is basically a structural beam in your wall that keeps your walls standing. In North American standards, there is one stud every 16″ apart. It seems like that’s not the case in Sweden, because the holes in the Lack mount do not match that. But that’s okay, you really only need one stud mounted.

The reason why you want to mount into a stud is so that your shelf won’t fall off due to the weight. You see, if you simply mount the shelf into the drywall, it will fall off because drywall is a weak crumbly substance, and it’s thin.

This may sound intimidating, but trust me, it’s not. It’s very easy to do. I’ll talk about how to drill holes without destroying your house.

Using the stud finder, you scan across the wall, and when it finds a stud, it will beep. Such amazing technology! It’s based off of proximity sensoring – it sends out waves that bounce back, and when those waves get blocked, it’s found the stud. Of course, since it’s proximity based, accuracy isn’t the highest, so be sure to thump the wall to find where it feels most “solid”. 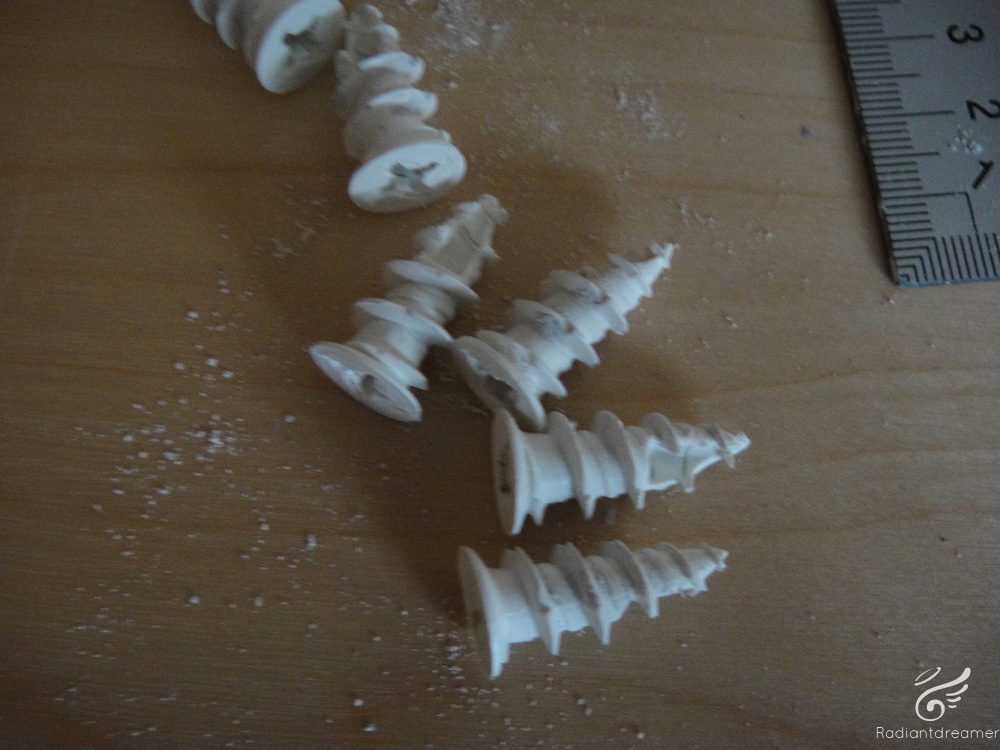 These are wall mounts. You will need these for the sections of wall that cannot be mounted due to lacking of studs. This solution isn’t as strong as actually mounting on a stud, but it’s strong enough.

What you do with these is drill a pilot hole into the wall, and screw these in. They will basically reinforce the hole for your screw so that it doesn’t fall out. When you put your screw into this wall mount, the wall mount expands, further keeping your shelf in place and secure.

Please note, that if your home is made out of concrete (like a lot of the houses in Singapore) then you don’t need to use a stud finder, but you most definitely will need to use these wall mounts. You’ll have to drill through concrete, but again, that is not a hard task. I will talk about how to do that. 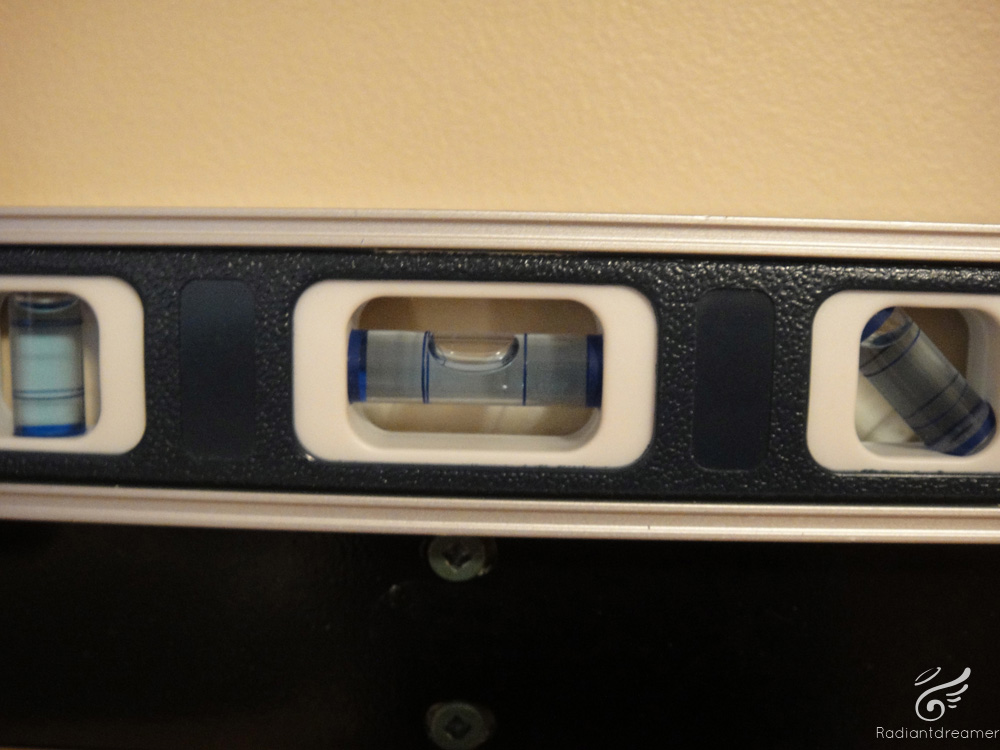 Once you’ve found a stud, mark it with a pencil at around the height you want the shelf mounted. Next, bring up the mount, and line up one of the holes with your mark. It really doesn’t matter if the stud happens to be on the left, right, or center of the mount.

Next, take a leveler (shown above), and use it to align the mount straight. With the mount lined up, use a pencil to trace the holes onto the wall. (see picture below), and put the mount on the floor. 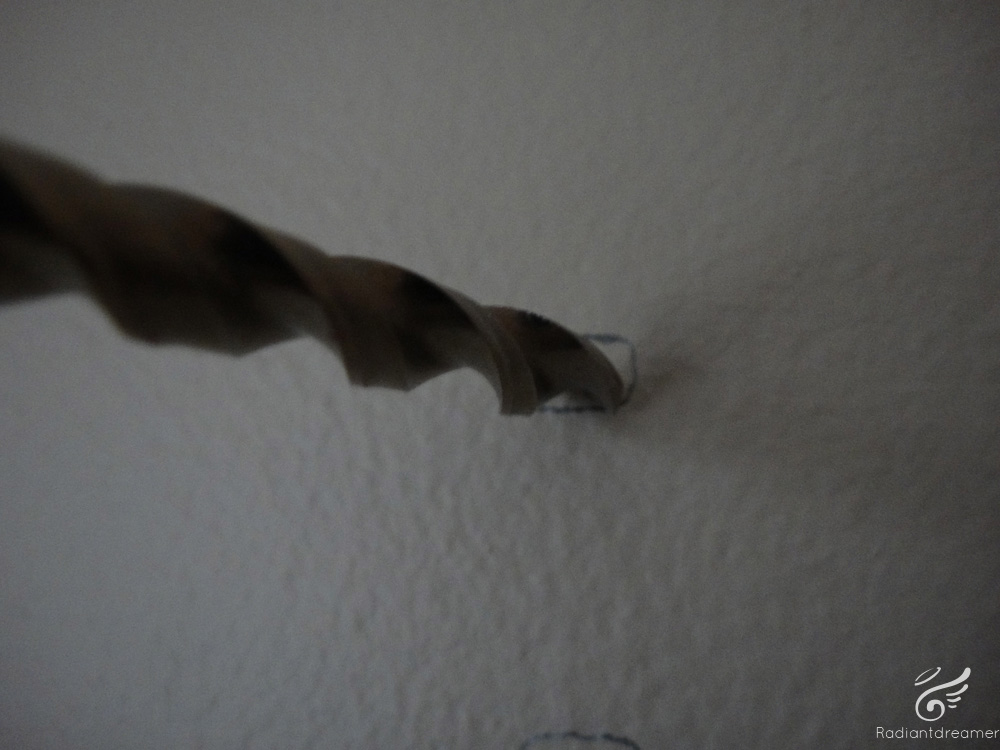 As you can see here, I’ve traced an oval marking that matches the placement of the mount’s hole. For the screws that will be screwed into a stud, those plastic wall mounts won’t be necessary. But to make it easier, I will drill a pilot hole. A pilot hole is essentially a hole that is much smaller than the screw, and is used for the purpose of guiding the screw. So take a drill bit that’s much smaller than your screw, and drill it in to the stud, pull that out, and repeat for the hole directly below. It’s VERY important that the drill bit is smaller than the screw, otherwise the screw will have nothing to thread!!

Also note, that if the drill bit goes in easy with little to no resistance, then you know you did not hit a stud! You’ll have to re-measure again! You’ll know you hit a stud if you find resistance when drilling. 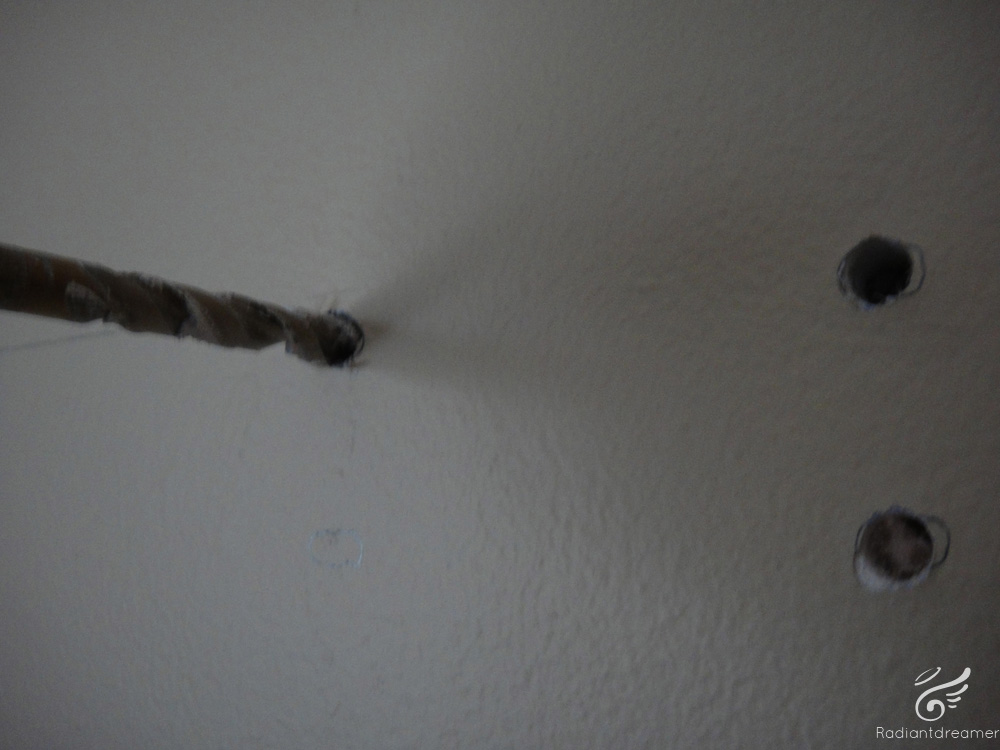 For the plastic mounts, you want to drill a pilot hole as well. Most likely, you’ll be using a bigger drill bit. Don’t make it too big of a hole. You can see some of the insulation in the bottom right hole.

If you are drilling directly into concrete, the type of plastic wall mounts will not be short and stubby like the ones I have. They’ll be longer and thinner, and the pilot hole will also be bigger (it should actually be about the same size as the plastic mount).

You won’t need a special drill different from the usual hardware drill, but a hammer drill will make it easier (I bought a DeWalt hammer drill a while back. It’s sweet!) The drill bit you use may also need to be a special drill bit meant for drilling into concrete. But otherwise, drilling will be exactly the same method. (you’ll just have a harder time!) 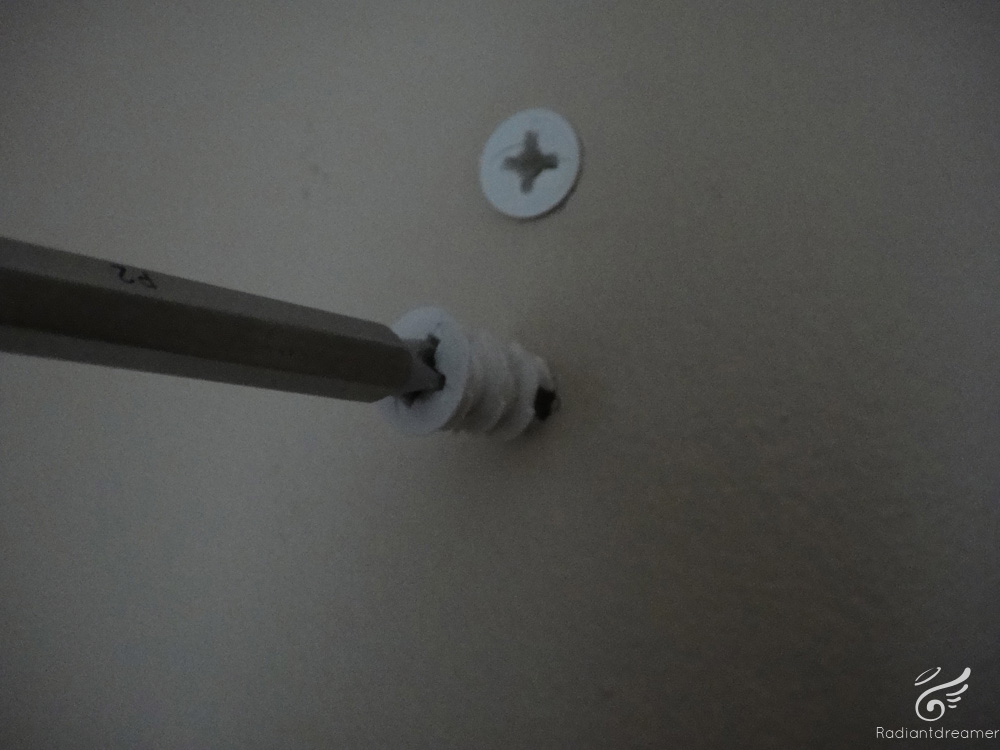 With the pilot holes drilled, it’s time to put in the plastic mounts. The type I have are screw-in types. But you can also use the long threadless type (they look almost the same as the ones used for concrete).

With these screw in types, you cannot (repeat cannot!) use a drill. Hand screw it in.

The long threadless types need to be hammered in. If you’re mounting into concrete, you’ll also be hammering the mounts in. You may have to re-adjust and make your pilot holes bigger, but it won’t be as difficult since the hole is already there. 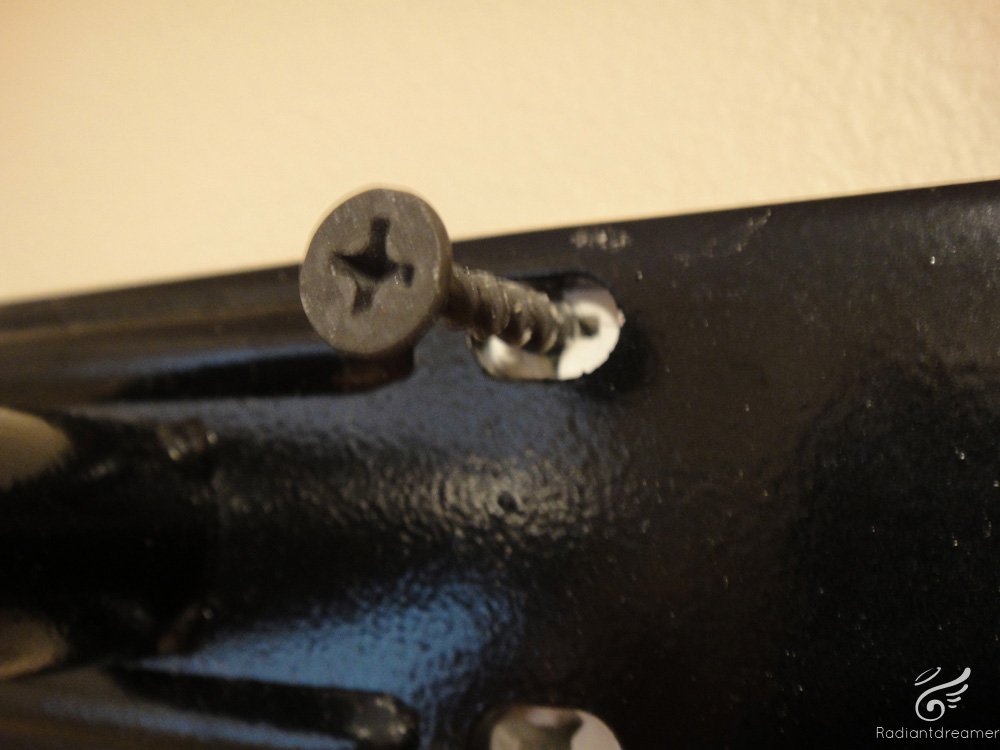 With the plastic mounts screwed in, put your wall mount back up, and begin screwing in the screws. Again, DO NOT DRILL! Hand screw them in. It should be pretty easy. DO NOT OVER-TIGHTEN!!

Use your leveler to make sure your mount is level, and adjust the screws as necessary. You do have a little bit of wiggle room. 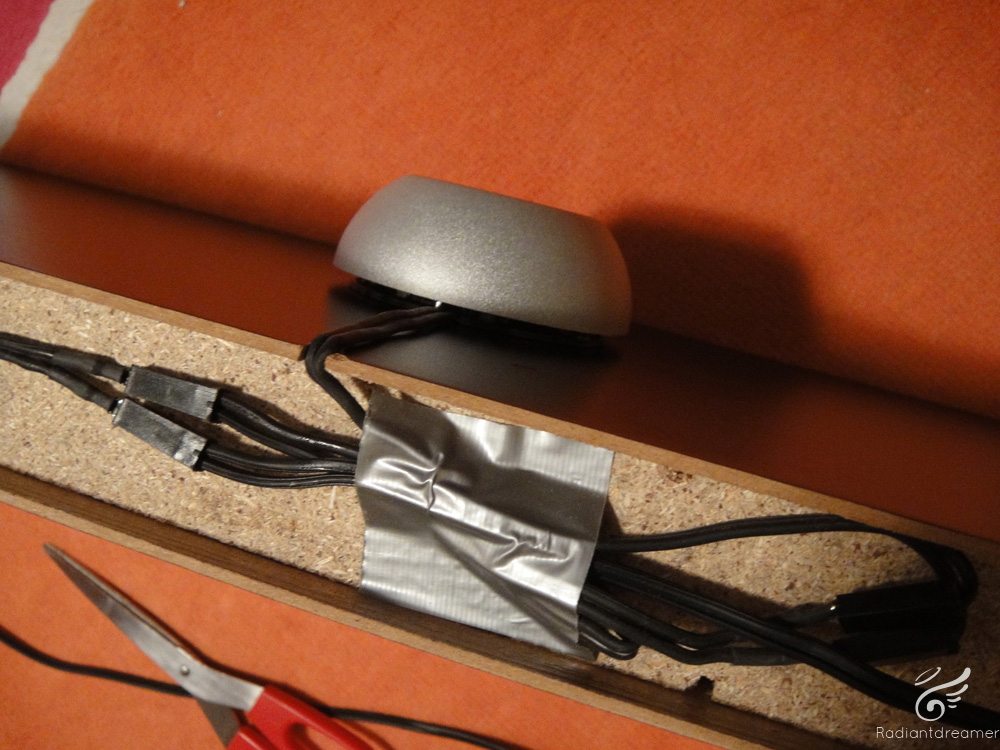 Next is the lighting – What I did was measure the distance from the edge to where I wanted the light to be, and marked the back of the shelf. I then used a cutting knife to put a small “relief” for the wire.

I then measured from that point outwards to where I wanted the light to be mounted, noting the length of the wire as my indicator. Taping that down, I repeated it with the light on the other side.

After ensuring both sides are equal, I drilled it into the shelf.

I then taped the wiring to the back of the shelf (there’s room) and just arranged it however it would fit. Keep the two large holes clear because that’s where the wall mount slides in.

After that, simply slide the shelf into the wall mount, and fasten the screws to the bottom of the shelf (you know those two small holes) and YOU’RE DONE! 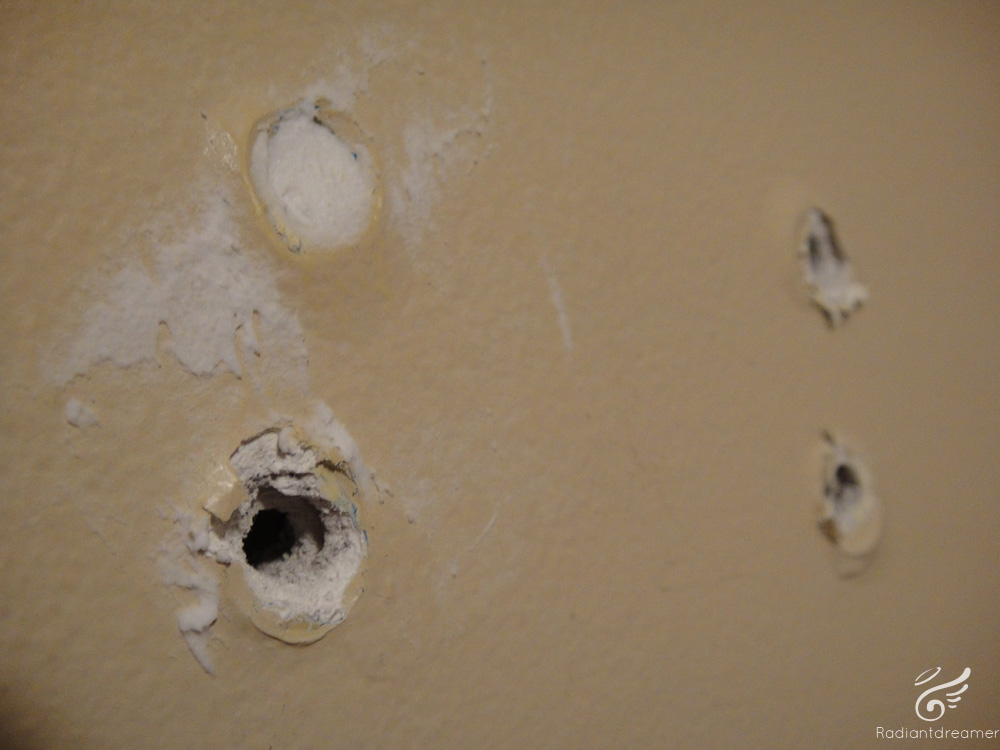 If you ever have to remove the shelf for some reason, you’ll need to be prepared to fix the holes.

If it’s drywall, the solution is simple – lightly hammer the hole in slightly for a very mild divot, and then use wall repair paste to cover it. You’ll have to smooth it out later with sandpaper after it dries, and then paint that section of the wall with the same color. If you do it right, it will look as if those holes were never there!

For concrete walls, you’re kinda hooped… sort of. You will have to unscrew the whole thing, and then drill through the plastic mount before putting some wall repair on it and painting. It might not look as flawless as drywall though, so be prepared for that. 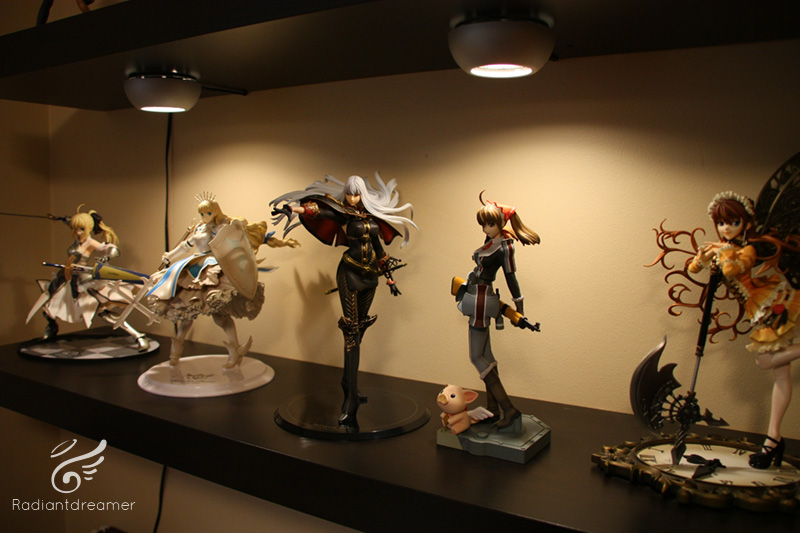 So there you have it! A beautiful display shelf for your beautiful figures! In the end, doing this is well worth the effort!

Last week, I asked people to mention what their favorite JRPG was on DS. The reason I asked was to insure the prize went to someone that owned a DS, and liked JRPGs. No point sending a prize to someone if they can’t use it!

Neorecon19 wins this copy of Magical Starsign. A great little RPG that’s in practically mint condition! Thanks for participating! 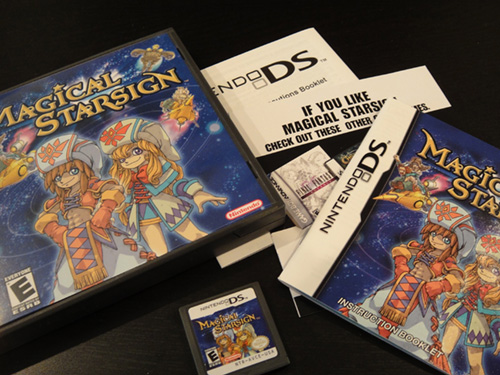 I create stuff in my mind, and try to barf it out onto tangible mediums such as Photoshop, and video game art. Sometimes, I get paid to do it because I'm a freelance artist working in the video games industry. Getting paid to do what I love (video games, and art) is my dream come true!
Justin Bieber Belieber Fever O_o;
The Textures of Singapore