I had the idea even before my Elwing arrived. When I first saw Elwing online, I knew that I had to buy her. She’s just one of those figures that makes sense for me. The detail is amazing, and the pose is adorable. And she’s an elf. I love elf girls. My mascot character, Vihena was an elf. Once Elwing arrived, it still took me a couple of months before I actually got off my lazy butt to photograph her. Of course, I was waiting for a nice weather day to do this shot.

I can’t say there’s just one thing I like about Elwing. I love how the eyes are not made in the conventional method of spray-on eye decals. These ones were made of what appears to be ABS clear plastic, creating incredible depth and character. I’ve never seen that done before! I loved the detail in the wings headdress, and the bow is a nice touch. The details put into her belt and pouch are quite wonderous. It being from a relatively unknown manufacturer definitely made me have doubts, but it was worth a try. Unfortunately, I don’t have many other photos to show for all that I am saying, so this is less of a review than you should expect. Perhaps I will expand on the topic of this figure if I ever do take more photos of her.

First thing I did before the shoot was try to pick a background. You’d think that a forest image would be pretty easy to find. In actuality, it’s not. 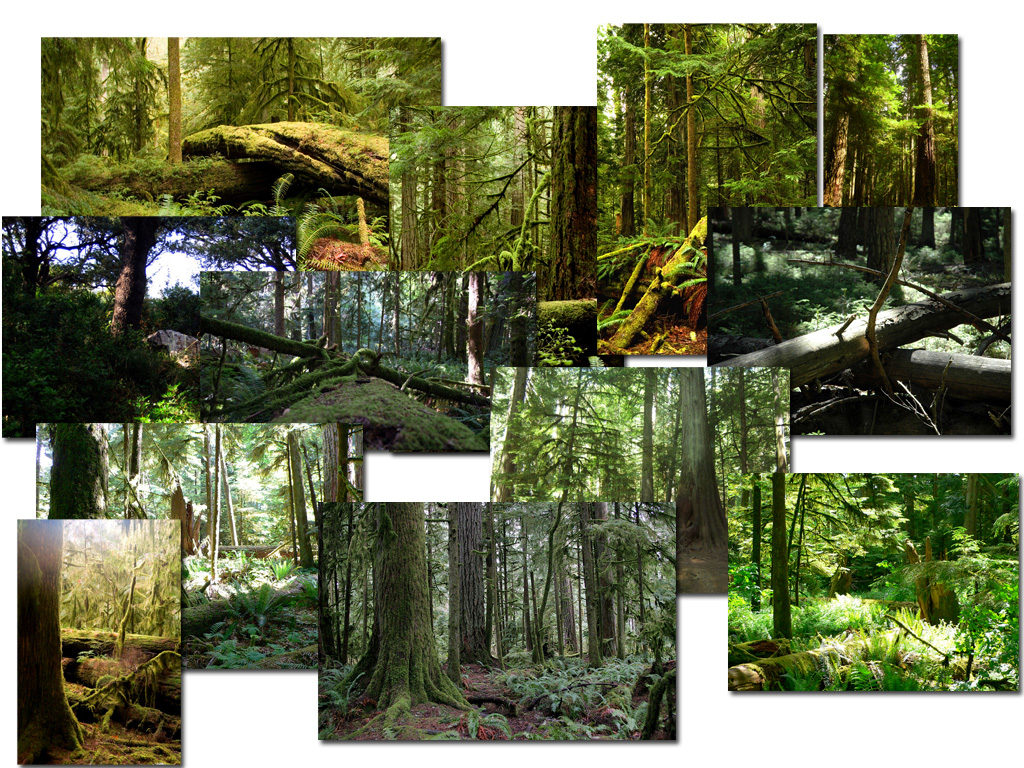 The background images that I went through.

This was just a small sample of all the background images I went through. Virtually none of them were what I was looking for. Everything was either too dark, or too light. There simply wasn’t enough atmosphere, and the angle that I wanted just wasn’t right. I needed something for Elwing to appear in, but I needed the image to be large enough in scale that Elwing didn’t appear like a tiny dot in the middle of the image. In a lot of the images, if I had dropped Elwing in, she would appear too big for the scene. Shrinking her down would ruin the scale too. 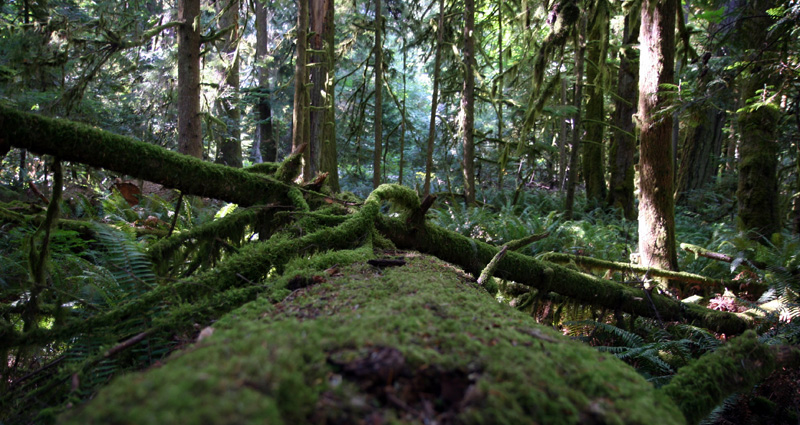 The original background image that I chose.

This image had a pretty good sense of scale that I was looking for. The log in the middle looked like a decent enough size and you couldn’t really tell how big it actually was. For all you know, it could have been just a small mossy branch. The only problem I had with this background was the fact that the lighting wasn’t what I wanted. I needed something with more drama, and much more atmospheric. This image was pretty lame to start. So off to photoshop I went. 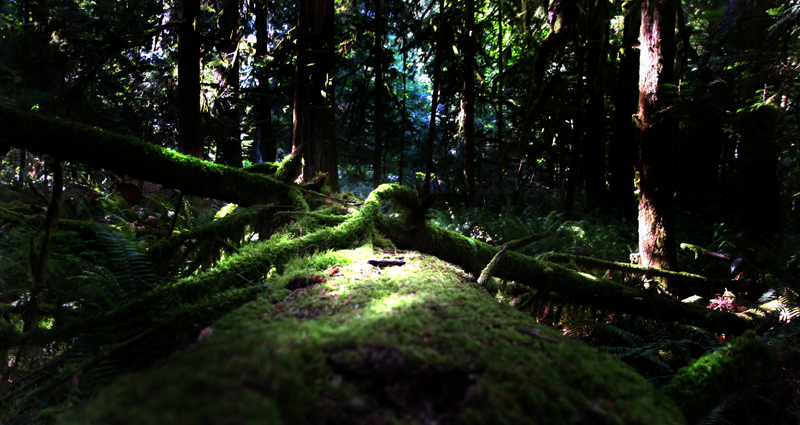 The final background image after photoshop.

I started by darkening the entire image using levels. Of course, this produced really dark shadows, and also increased the contrast for light areas, however the result still wasn’t what I needed. 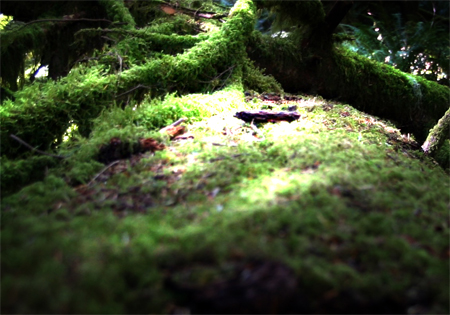 I got the result I needed by using the dodge tool and painting over areas that I wanted to have brightness, to give the appearance of light shining through a canopy of trees. Those areas are typically high concentration in light, and blown out compared to the darkness and shadows of the rest of the forest in shade. I also added a few highlights around the leaves hanging around the left side, as light bounced onto it from other brighter sources.

This was also the location that I thought would work for Elwing to stand on. 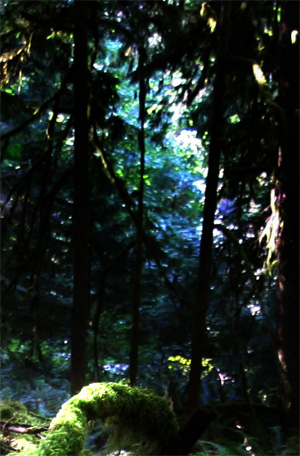 The next step after that, was to create some depth. Using a mask, I separated the main log and other foreground elements from the further background, and applied a gaussian blur to it. Lack of detail gives the appearance of depth that things are further away. I also narrowed the band in levels so that the bright sections here appear brighter, making the distance seem even further away. From the looks, it’s like a clearing into a forest path with shining sun’s rays.

By giving the image depth, the forest appears much larger than it really is. 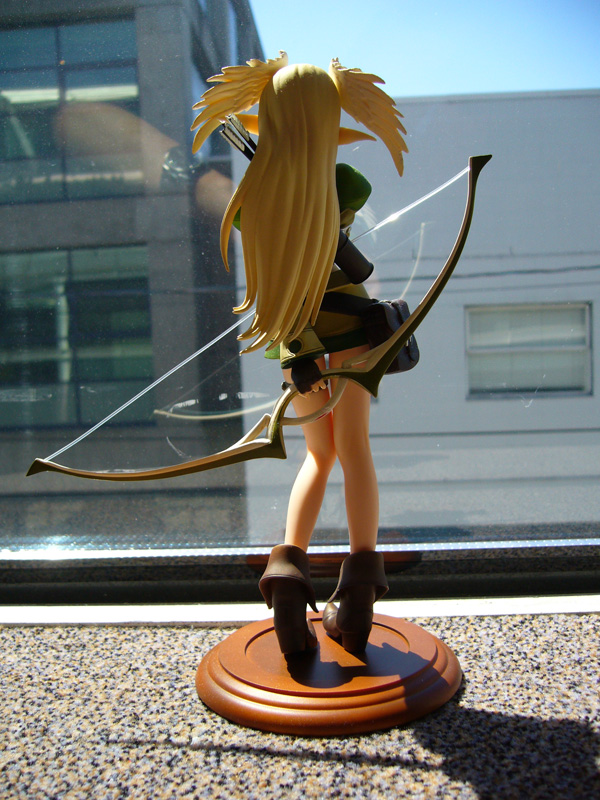 So one sunny day, I took a photo of Elwing, pretty much exactly how I wanted it to look. The key to making a convincing composite is to make sure your lighting matches. Lighting can be tweaked in photoshop, but it’s a lot easier if you’re able to get the match right from the photo. Obviously there will still be minor tweaks, such as gamma, brightness contrast, and histogram levels. However, it’s very very difficult to tweak shadows, so it’s very important to capture the proper shadows you want. For me, I knew my light source is in the upper left, and to the front, so I was able to match that in my background photo. 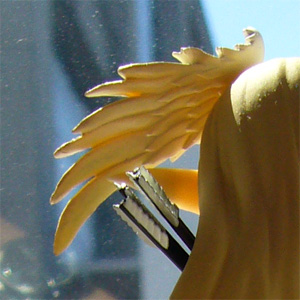 The next step was to cut Elwing out of the current background, and to drop her into the new background. There are many ways to do this, but I chose to use the polygon lasso tool for greater accuracy. Considering there were a few segments that were very detailed, it would have been difficult to get accurate cuttings using any other technique. The area that was most difficult would have to be Elwing’s headdress with the two spread wings. Going around each feather was tedious and no fun.

I tried my best to keep the nice bright rim in the image. When you have rim lighting like that, it becomes much easier to match the background with your subject, as you won’t see weird anti-aliasing line problems with bad cuts. This is particular true with two similar shaded objects. Fortunately, my background was a very different color from Elwing. 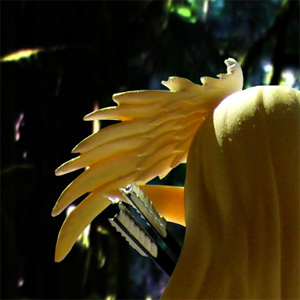 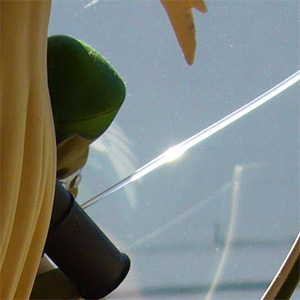 The bowstring flare was a difficult one to reproduce. The light itself fades off into the background, but of course, I don’t want that background showing! I essentially had to cut through the flare, as if ignoring that it was there. From that I had to make my own flare using various gradient shades of color, and using the transform tool to angle it right. Unfortunately the result is still not a perfect replication. Not that it would have been easy to do in the first place. 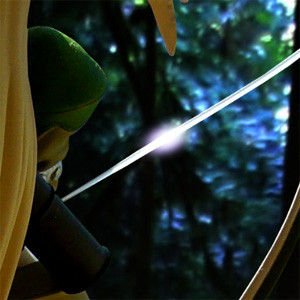 Many others have asked about how I reproduced the convincing shadow. 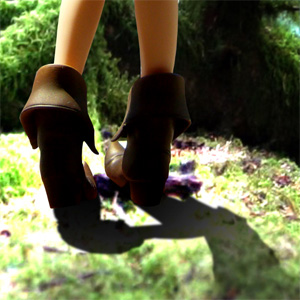 Obviously, I couldn’t use the existing shadow in the original image. The problem with that is that the shadow shows a lot of the actual background that it’s on – the figure stand, the carpet and texture. It’s simply not usable. One technique which I do not recommend using, is to create a shadow in the shape of Elwng by duplicating the Elwing layer, and fill it black, then using transform tools, to squish and skew it. This is inaccurate and almost always looks artificial and forced. What I did instead, was use the original shadow as a guide. I started a new layer, and used the lasso tool to “trace” the shadow. I then filled that with black, and then set the transparency on it so that it matches perfectly with the new background.

And there you have it. An in depth look at how I completed the Elwing photoshot. Tune in for more in the future! Hopefully it won’t be as long as this one… 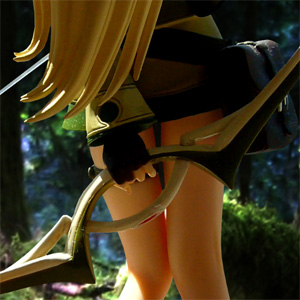 I create stuff in my mind, and try to barf it out onto tangible mediums such as Photoshop, and video game art. Sometimes, I get paid to do it because I'm a freelance artist working in the video games industry. Getting paid to do what I love (video games, and art) is my dream come true!
Differences in Plastics – ABS, PVC, Vinyl, Resin, Polystone, oh my!
Using Photoshop to Create Interesting Photos