It Seemed Like a Good Idea at the Time… 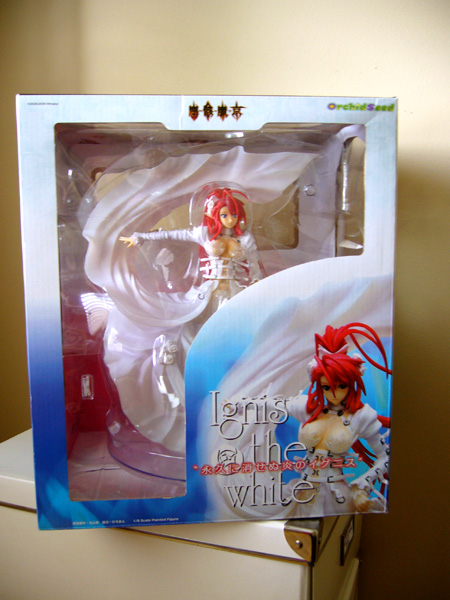 FINALLY. I’ve sold Ignis the White on Ebay. I’ve had Ignis for a while, but have been itching to get rid of her ever since aquiring her. I bought into the hype way back when she was announced, and when everyone and their dog tried to get one of these. At first, I was indifferent towards it, thinking “yeah, it looks nice, but it’s a big space hogger, and it’s out of my price range.

When I saw her available at play-asia, I jumped at the opportunity and bought her for a reasonable price. I was thinking “Yes! I finally get to own such a magnificant figure!”

The thing is, she seriously is a big space hog! She took one whole Detolf shelf! She definitely demanded presence. I can’t stop complaining about the problems with this figure. Get ready to hear my rant!

First off, the dress. It’s nice, but it’s also very heavy, and made out of an ABS/PVC blend. Super hard, and impossible to form-fit. Which caused her to not grip her dress properly (her left hand), and the mid-section of the corset wouldn’t tuck in properly either. Basically it was warped from the start. I probably could have heated it and bent it back, but it was a hassle all on its own trying to remove the damn thing.

Speaking of which, sometimes, Cast-Off “features” drive me nuts. I honestly don’t care about that option, but when it’s there, it actually becomes problematic, and a waste of effort if you ask me. Ignis has a full lingerie set underneath. You know, with the lace panties, the stockings, the garter belt and clips, the whole nine yards. But the thing is, I have no intention of displaying her like that! The big billowing dress is there for a reason. And to add to that, the top of her corset can be removed to bare her breasts! I could care less. But they keep falling off! Not only that, the “cups” are semi-transparent, meaning you can see nipple through them. That I did not expect, as it didn’t appear that way in the prototype shots. Anyway, I was displaying this at work, so I had to make it a little more “decent” by cutting a small piece of tissue and placing it as a layer between her breasts and her cups. Worked out pretty well. I ruffled the tissue a little so it looked like it was part of the design. It hid her gaping cleavage too.

In addition, I tried to take photos of her for some photoshop work. I tried and tried and tried, but it was impossible to get a good angle out of her. her blank stare forward threw off the angle most of the time. If I tried a bottom up 3/4, she looked like she was staring into space, and the billowing dress was literally a conic mountain. If I tried a top down 3/4, that little antenna hair would cut into her face, so it looked like it was picking her nose backwards or something. Overall, no angle impressed me. I think that the one I got had a bit of fault in the angle of the head. The prototype shots show her head slightly turned more.

Overall, the quality of this piece of plastic garbage was unbearable after some time. I should have expected as much from Orchid Seed. The color tone of the skin looked terrible – very plastic-vinyl-like. The spray-on eyes were terribly done, and the hair color was way too saturated. Overall, it didn’t work with the dress at all. I would say that the best feature is that arc of fabric going up her right side. Outside of that, everything else looked like garbage. I’m glad to have gotten rid of it, even at a loss. Goodbye, and good riddance!

I create stuff in my mind, and try to barf it out onto tangible mediums such as Photoshop, and video game art. Sometimes, I get paid to do it because I'm a freelance artist working in the video games industry. Getting paid to do what I love (video games, and art) is my dream come true!
Figma Saber – The Best in PVC Posability
e2046 Elf Ranger