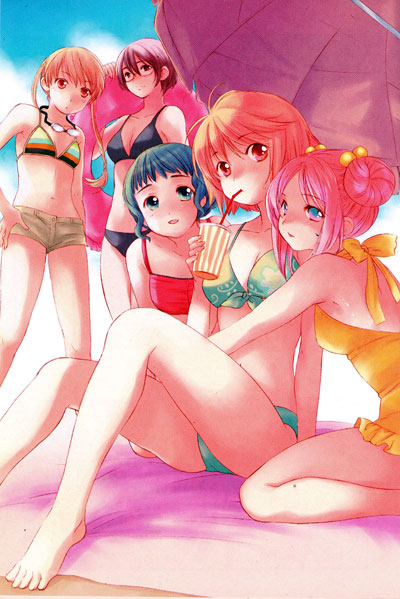 Going through my anime backlog, I decided to give Kashimashi a try. Having watched Kanon with my wife, it was a bit depressing. Rizelmine helped with that but it was a little silly.

I’ve read a few volumes of Kashimashi, and quite enjoyed it. It was a decent romance, with some light-hearted humor to it, so I thought my wife might enjoy it.

The premise behind this yuri anime is about a really feminine boy named Hazumu getting rejected by the love of his life, Yasuna for reasons unknown to him at the time. Through some freak accident involving aliens, Hazumu is transformed into a girl. This event triggers confusion in Hazumu’s childhood friend, Tomari as well as prompting Yasuna to confess her feelings towards Hazumu. Thus a love triangle is formed.

I’ve never read a yuri manga, or watched a yuri anime before, so I don’t know to what degree of yuri-ness this would count as. There wasn’t any heavy petting, or hot girl-on-girl action. It felt very much like a regular romance-drama. It had a much more serious tone than the manga did. The only humor was fan-service provided through Hazumu’s father and Hazumu’s best friend Asuta. I also read that the manga’s plot is slightly different, though I can’t really say at the moment, as I’ve only read 3 volumes. The manga has taken a different turn of events from the anime, but I won’t know how it will be resolved until I get the remaining volumes.

While it seems Hazumu’s transformation into a girl is just an excuse for yuri, the anime presents itself in such a way that Hazumu never feels out of place. The characters’ motivations are thoroughly convincing and clear, making the love triangle seem like a very natural occurrence. Hazumu’s femininity is further reinforced by Hazumu’s best buddy, Asuta, developing feelings towards Hazumu. Though Asuta’s struggles seem mostly for comic effect, it was effective in strengthening Hazumu’s believability.

After watching quite a number of romantic comedy anime from Tora Dora to Nodame Cantabile, Kashimashi seems to really get it right with the emotional heart strings. Most anime seems to derive character developement through lots of conversation and inner-monologue. Kashimashi has practically no inner-monologue, and not a whole lot of conversation. Much of the development is understood through the characters’ facial expressions, and occassional flashback, turning out to be much more effective, and making the characters much more believable and easier to identify with.

With only 12 episodes, the series doesn’t drag on with a whole lot filler, and gets right to the point without it feeling rushed. At the same time, the pacing is rather slow compared to the more ADD-targetted anime of this generation. Considering that the series is fairly old, it can at times, seem a little slow and boring. This is definitely a drama of a different nature. The humor, when present, is pretty shallow and recycled.

Character-wise, you see the standard archetypes personified blatantly in this series. Tomari fills the Tsundure type, while Yasuna the gentle, proper rich-girl type. Hazumu is the typical bubble-headed overly girlie-type, and then there’s the intelligent motherly type, as well as the annoying squeal-type from the supporting characters.

It seems that Hazumu’s role in this series is both major, and minor. The love triangle centers around her, but she’s also helplessly being dragged through the whole relationship problem. Overall, the love triangle ends up being a copy of Archie, Betty, and Veronica. Heck, their hair colors match to that archetype as well! However, it works really well with Hazumu being a girl, as it strengthens the believability of her fragile vulnerability.

The ending was what I expected it would end like, but not the way I wanted it to end. I’m sure many people who watched the series felt the same way. An OVA was released later providing a conclusion that I had originally wanted, but reaching that point in one OVA seemed rushed, and very unconvincing.

I would recommend watching this series, if you have the time for it between K-ON! or Haruhi S2. It’s definitely not something to write home about, but it’s also an anime worth experiencing if you’re into romance dramas.

I create stuff in my mind, and try to barf it out onto tangible mediums such as Photoshop, and video game art. Sometimes, I get paid to do it because I'm a freelance artist working in the video games industry. Getting paid to do what I love (video games, and art) is my dream come true!
Tome Kei Skit Scooter 1:9 scale
Meido kuki!