Have you ever thought about what would make your blog stand out? Maybe you have, but didn’t know what would work. Through my own experience, I’ve found that having a mascot does help, and I’ll talk about how today.

Quite recently, Lovelyduckie commissioned me to do some freelance work for her blog. She wanted a new blog banner, and couldn’t decide at the moment whether to do an update with some nice figure photoshop work, or to create a mascot.

She eventually decided to go with a mascot idea. (explained further below).

Some of the specifics she wanted was a character that was carefree and easy-going about life (sort of like Yotsuba). I asked her many questions, including what color represents this carefree attitude, and I came up with this: 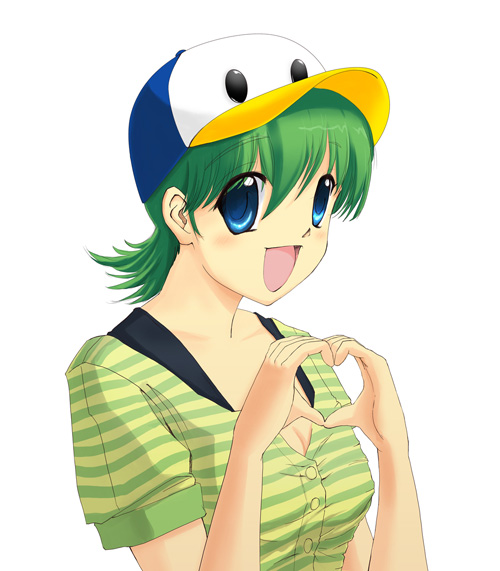 As you can see, her most unique distinguishing feature is her duck-themed hat, and her duck tail hair style. Green was the color lovelyduckie thought represented her carefree attitude. Her clothing style, and the hat type was based on her other personality traits, which narrowed her down to a very pleasant all-American girl.

Here’s a youtube video of her mascot being born:

Overall, she tells me that she’s extremely happy with the results. [rss]Looks like you’re a feed subscriber! Copy and paste this code: 78de9 into the comments on the contest page to enter![/rss]

There are several benefits to creating a mascot for your blog. The most important is self-branding. When you have a mascot on your site, that mascot represents your blog in a unique way. You can also show that mascot around via your avatar. And when anyone sees you comment, they’ll know that “oh hey, that’s Lovelyduckie!” and not “oh hey! That’s a Konata avatar!”

Many users like to use images of their favorite character or something, and stick with it for their avatar, or even have it represent their site (sort of a pseudo mascot). The problem with this is that for one, it’s extremely limiting. You’re limited to whatever designs the original artist had created. Secondly, there’s nothing stopping someone else from using the same character. (I use a revolving Konata on neogaf, and have been confused several times when I see other posters commenting, and thinking “I never said that!”) and of course the most obvious is they won’t be thinking about your blog but instead of Konata or whomever you had chosen.

When you have a custom character being your mascot/avatar picture, there is an immediate uniqueness that nobody else has, and that has serious advantages to the exposure of your own blog. The next time you see that above mascot you will NEVER forget that it’s lovelyduckie. That’s how powerful it is.

Not only that, but your mascot can also take part in your blog posts, or sit on your sidebar, and really bring personality to your blog!

If you haven’t created a mascot, I strongly suggest you do. If you want to learn how to get started with that, I can definitely help. Drop me an email, or leave a comment.

I’m not really back yet…

While life does take precedence, I’m starting to ponder the future of radiantdreamer. I’m not yet ready to say anything yet, because I haven’t quite reached a decision on what to do. But please, do stay tuned by subscribing to my RSS feed, so that you’ll know, for whatever I decide.

I create stuff in my mind, and try to barf it out onto tangible mediums such as Photoshop, and video game art. Sometimes, I get paid to do it because I'm a freelance artist working in the video games industry. Getting paid to do what I love (video games, and art) is my dream come true!
Has Radiant vanished off the face of the planet?!
Ugh… life.