Another fan-art. Haruhi is always so bossy and demanding. She’s the equivalent of a lot of stereotypical “violent korean girlfriends“. For Haruhi, Moe just doesn’t happen with her. Going along with the alternate Mikuru, why not reverse the role with Haruhi as well? Here’s Moe Haruhi! Super kawaii!! In terms of drawing anime art, I would have to say that the paint job in this one was most satisfying. It actually didn’t take all that long to paint or to draw either. All in all, I would have to say that moe is a very easy style to draw. 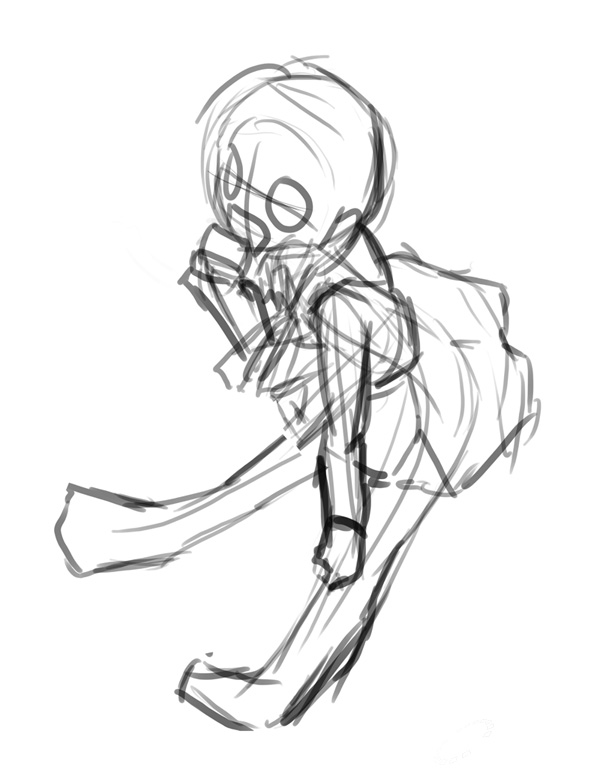 The initial gesture for Moe Haruhi. As you can see, it’s pretty basic, but gets the idea across. 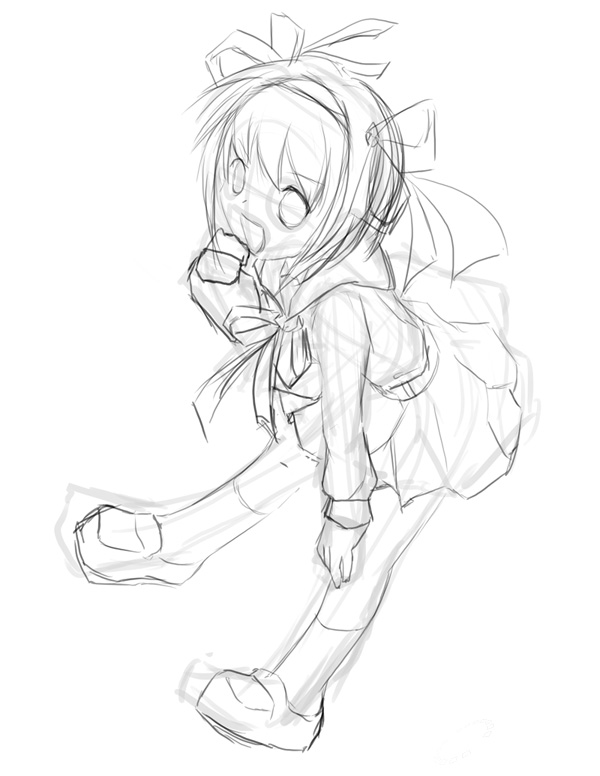 The sketch art drawn on top of the gesture art. Not much to explain here. But you will notice that the armband is missing here. I kinda forgot. But at least I got the rest of the school uniform correct. A lesson to be learned: Always use reference! 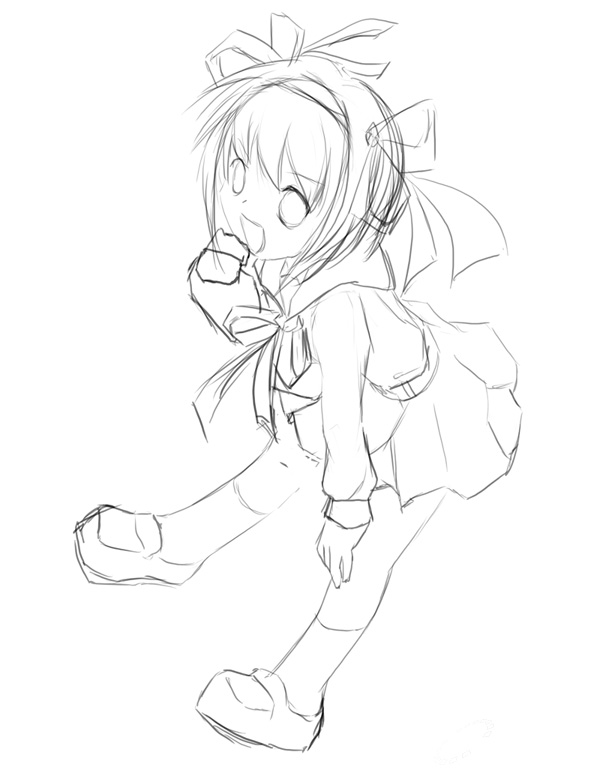 Here’s the sketch with the gesture lines removed. 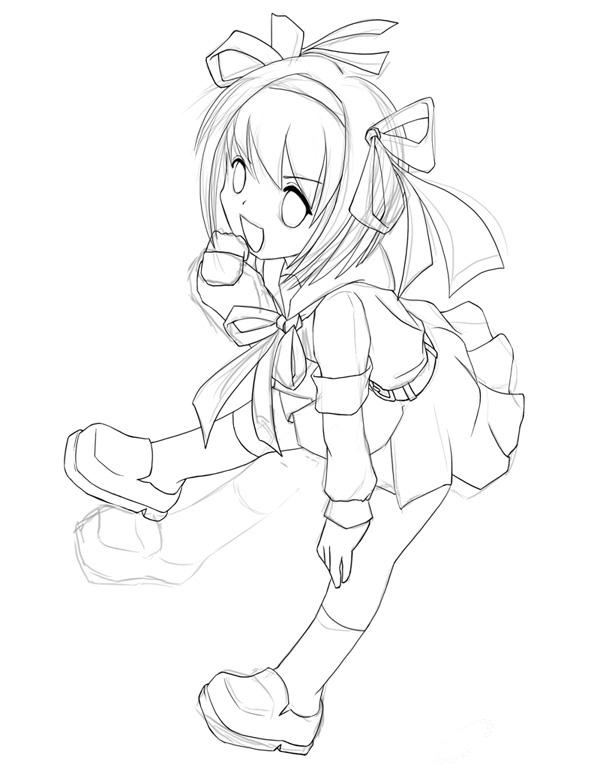 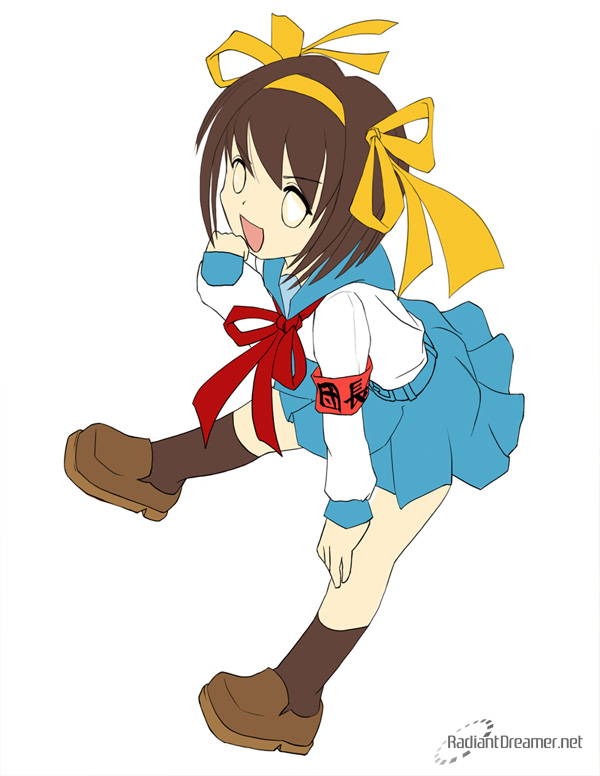 The initial color scheme. I set EACH color on a separate layer, and painted it with solid color. I then locked the transparency of the layer so that I can’t paint outside of the already painted areas. This helps me organize my colors better, making it easy to color, and to change color tints if I need to. From here on, it’s just simply shading in with darker shades, and highlighting with lighter tones. 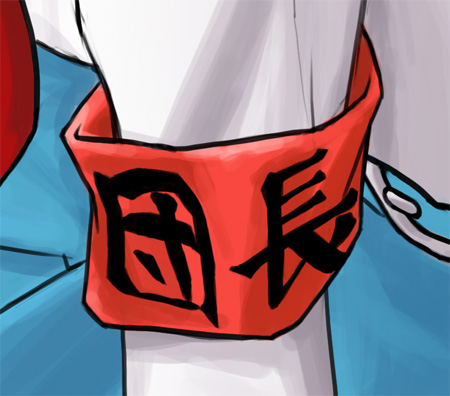 A close look at the arm band. It’s fairly accurate to the original. What I did was find a shot with the arm band, and copied it as a reference layer in my image. I then sized it properly, and changed the perspective on it, and applied a warp. From there, I painted a clean one from my manipulated version (because the manipulated version is all pixellated and mangled, it was only good for a shape reference). 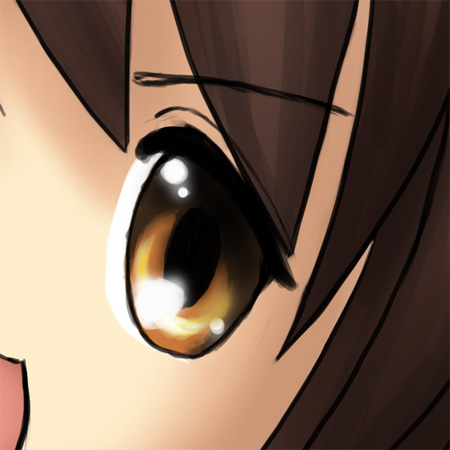 Closeup of the eye. I definitely pulled a reference for this one. I tried to keep the eyes as moe as possible, but without eliminating the characteristics of it that made Haruhi, which is the angles of her eyelashes, and the angles of her brows. It certainly detached from becoming totally moe, but it’s better than a generic moe character wearing Haruhi’s clothes, if that makes sense to you. 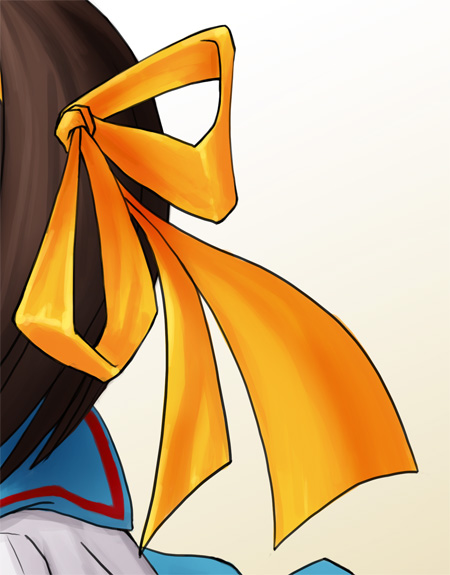 What I liked about the ribbons were the highlights, and the smoothness of the shades. It had a sort of glimmer in the material that I really liked. Fairly simple to do, but quite effective when done right. Drawing ribbons can be difficult if you don’t know how to do it. The idea is to draw as smooth a line as possible without wobblies in the line. Not an easy task to accomplish and requires countless Ctrl+z. The thing is to draw the line as quickly as possible in one smooth motion. Slowing down introduces wobbles, and requires even more cleanup to correct. It’s easier to keep trying and undoing until you get the right curve. Doesn’t matter if you overshoot, because you can erase the ends later.

Well, that wraps up another drawing how-to! Be sure to check back often for more updates, and until then, there’s always my webgallery at https://www.radiantdreamer.net! Enjoy!

I create stuff in my mind, and try to barf it out onto tangible mediums such as Photoshop, and video game art. Sometimes, I get paid to do it because I'm a freelance artist working in the video games industry. Getting paid to do what I love (video games, and art) is my dream come true!
6,666 hits
Gothic Devil Girl with Cross available at Hobbyfan