Last year, Chun suggested that I learn Easy Painter Tool Sai tm. I scoffed at her for using such an inferior and simplistic paint program (no, not really). I humored her and got myself a copy of it anyway, but it ended up sitting around doing nothing. “Ha! What a useless program!” I exclaimed, justifying my procrastination.

I continued to stubbornly use photoshop to do my line art for the next 6 months. Photoshop is great for doing painter-style illustrations, but try to do accurate line-art on it, and it’s like wrestling with a shopping cart with two broken wheels (one front, and one back) and a screaming baby trying to do a balancing act on the back end.

So last week, I decided “That’s it! I’ve had it with Photoshop! I’m going to try Easy Painter Tool Sai tm!!” Enlightenment hit me like a tonne of bricks. I felt like I was reborn. My mind was blown like a pinata at a birthday party full of kids who ate too much cake.

Surprisingly, it didn’t take as long as I had feared to learn some of the basic things from it. There are definitely some differences, but the pain and suffering that I went through was totally worth it. Truth be told, I was just intimidated at learning a new program, especially one as complex as Sai. (see what I did there?)

I struggled with Sai, so I decided to ask Chun for advice. After all, she’s been using Sai forever now. She’s practically a guru at it!

My conversation with her on MSN was something like this:
Me: So how do I do this thingamajig?
Chun: I have no idea what you’re talking about.
Me: You know! The thing where you do this and do that, but then I’m stuck on the thingamajig?
Chun: I still don’t know what you’re talking about.
Me: … nevermind. I accidentally figured it out when I was trying to explain it to you.
Chun: lol!

Now, maybe Chun actually did know how to use it, but she wanted me to figure it out myself? I know that’s what Yoda would do… Chun! You are a true master! oRZ

Yoda Chun: Out loud, I laugh! Learn for yourself, you must!

Still, after learning some of the basic functionality by tripping over myself while tangled in skipping rope, it wasn’t quite enough. I decided to google the interwebz for tutorials. We all know that the interwebz is smart.

Google failed me. The first three “tutorials” were images on Deviantart. Apparently, there is zero (English) documentation on how to use Sai. Almost everyone who’s posted tutorials figured out Sai themselves. This frustrated me as the other tutorials I found were so absolutely basic and similar that it was like listening to a broken record. It was especially upsetting when the writer even KNEW that it was so basic. Elitist tutorials included “It’s the pen tool. You use it ummm… draw. Duh.”

The documentation for Sai is abysmal. Probably because this is a Japanese product. I would have been totally on my own if it wasn’t for some awesome community that decided to take time out of their lives to make a translation patch for it. Exclusivity lowers sales, but the community will always find a way to hack patch it!

I intend to add to the community, by writing some tutorials on how to use Sai, starting with the basics, before deciding it’s too much work and give up.

So for the next couple of days, I continued to struggle to learn a fairly popular, but totally unsupported program. This program probably won’t help me very much in the video game industry, but it’s commonly used in the Anime community. Does anyone know why? Is it because anime fans are elitists and prefer to use Japanese products as opposed to bloated North American software like Adobe?

I think it’s more because Sai is affordable, AND it rocks at doing line art. It’s strange though. I did a Google Keyword Search, and found less than 10 monthly searches on Painter Sai tutorials. What? There’s 750 more if it’s simply “Sai Tutorials”, but that could probably include a certain Ninja Turtle’s weapon of choice.

I can’t say that it’s great for doing painter style stuff, but I really haven’t explored it enough. The way it blends its transparencies are FAR different from Photoshop. It feels really weird to paint in Sai.

So far, the results of my labor haven’t been to my highest level of quality for Radiant Dreamer: 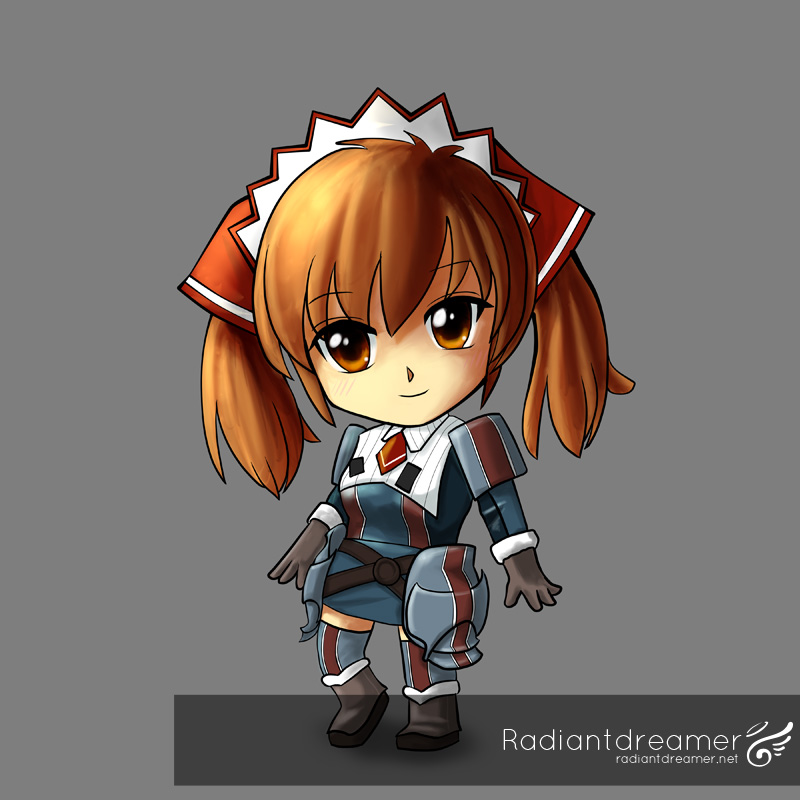 While the art is not bad per se, I think that I can definitely do better. While I do like the much cleaner line quality, it looks a bit… artificial. Almost too clean. What do you think?

I think I need to practice more with Sai before drawing further conclusions.

This is actually a re-draw from an older piece I did a while back – which ironically, was a bunch of chicken scratch sketching. The original Photoshop version: 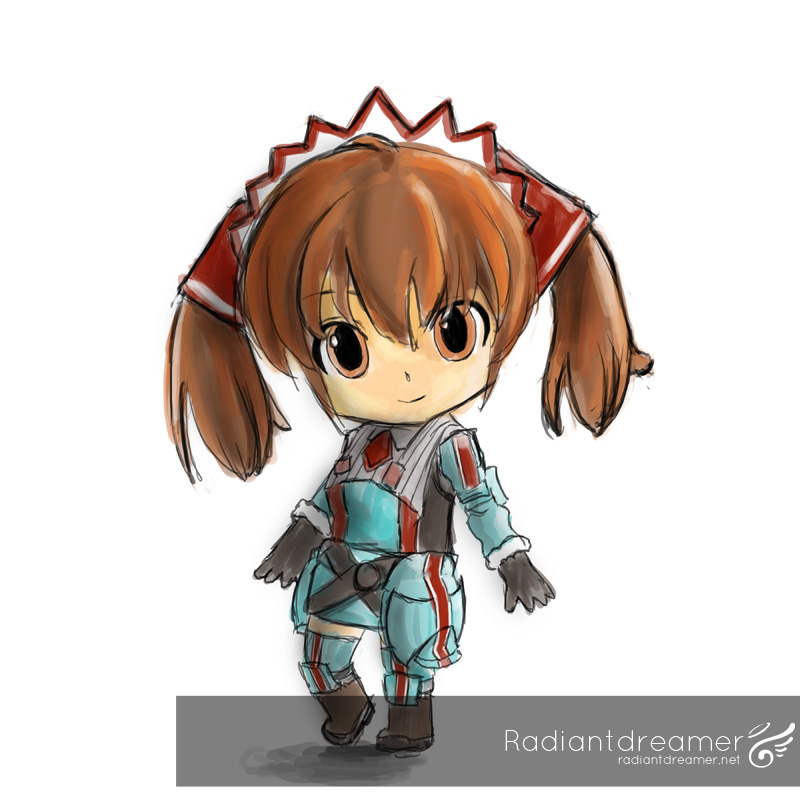 At the time, I really wanted an Alicia Nendoroid. So this was sort of my own fantasy. I wanted to just draw it out quickly so I could fap to it. (no, not really). 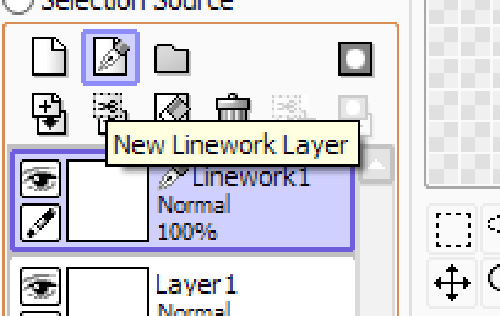 Of course, with great power comes … lots of headache. I was still used to drawing sketchy lines like a hyperactive bunny with an Energizer battery stuck up his butt. While everything looked fine on the surface, my chicken scratches looked like a nest constructed by half-retarded crows when I tried to edit the vertex points. 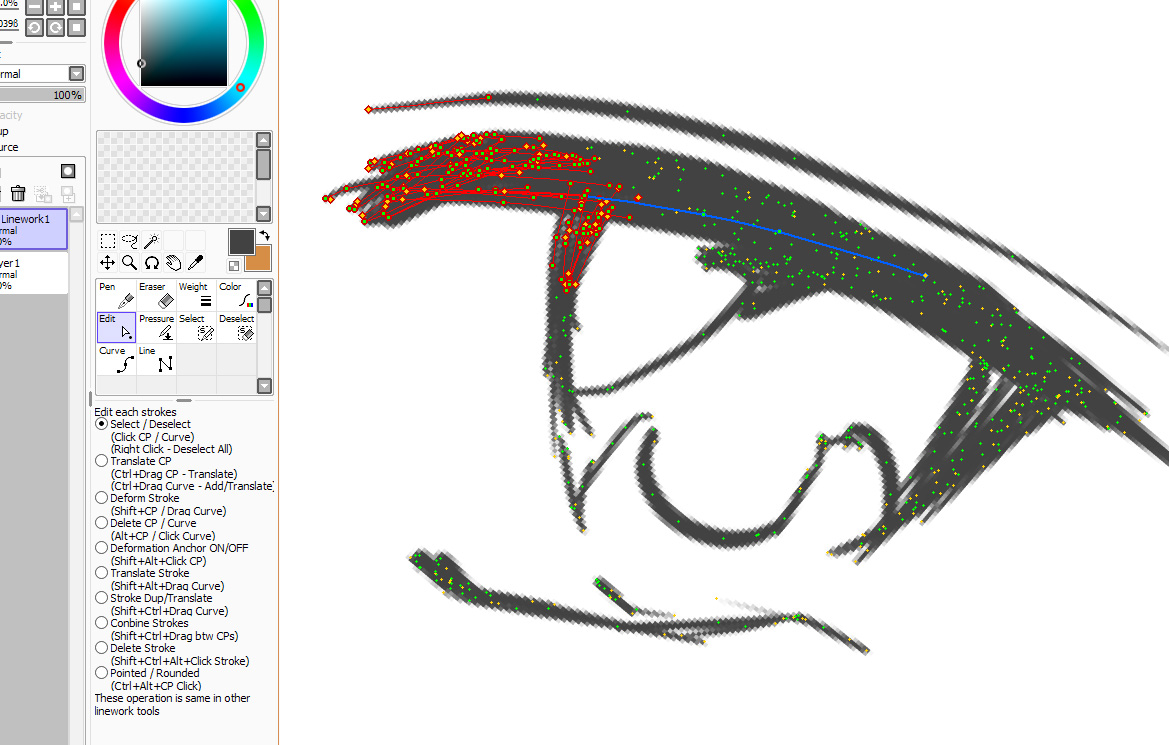 I basically had to approach it differently, and learn to actually draw smooth lines. With the handicap of the stabilizer set on S-7, I was drawing lines like a lethargic draftsman doped up on Nyquil. The process became incredibly slow. At this point, I was tempted to jump ship because I was more bored than productive. Not a good sign when you’re trying to learn. 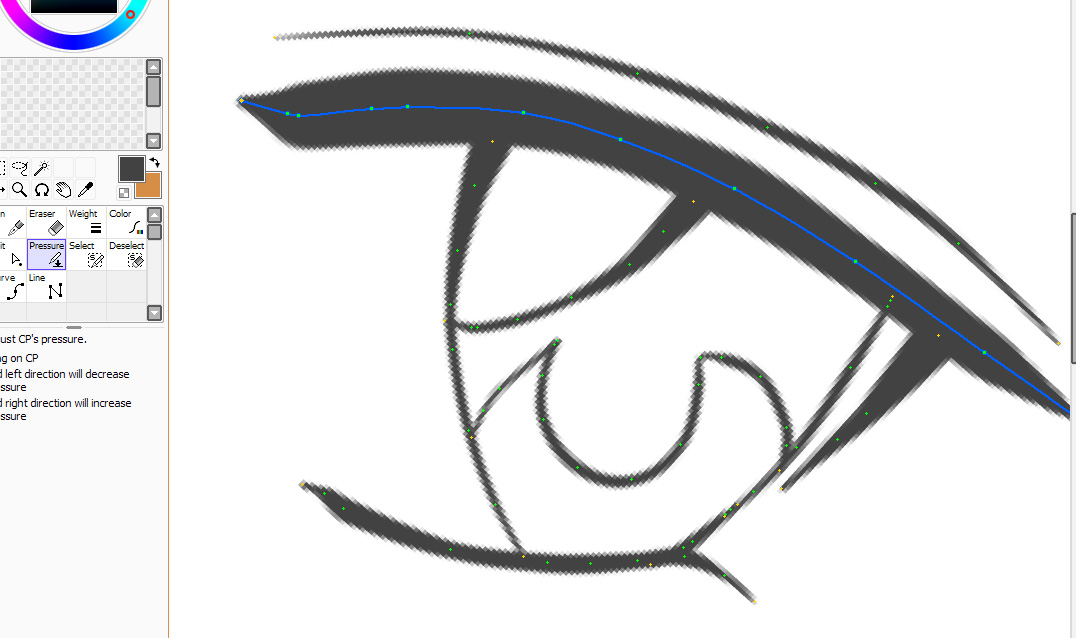 The way I see it, Sai is a line art tool. The process would basically be:

Sai is unfortunately a one-way street if I decide to use the Linework layer to do my inking, since Photoshop doesn’t support the Linework layer. Sai has to convert to a PSD, which basically means rasterizing the vector line art. Another problem I found with Sai is the transform tool doesn’t let you do cool things like warp, or perspective. It only lets you scale and rotate. (correct me, if I’m wrong!)

I might give OpenCanvas a try again, but it seems there are more people looking for cracks than actually learning how to use it.

In closing, if you decided to just skip all the text, go ahead and enjoy the video of me struggling with Sai (and my own inability to draw while under pressure) at 400% speed:

So after all that, will I continue to struggle and learn how to use Sai? Most definitely. The good news is that Sai is incredibly intuitive, and very easy to learn. If you’re intimidated by Photoshop, then Sai might be for you. It’s also damn cheap, at about fifty bucks, as opposed to Photoshop’s $999 price tag.

The Linework Layer and Stability control really makes Sai one of the ultimate line art paint tools. But the idea of jumping between two programs to complete a piece, the lack of support, and the lack of people looking for support, Sai might be one of those underground programs your momma told you to stay away from, but you’ll use secretly anyway.

In a closing unrelated note, my Clalaclan Philias by Alter arrived just moments ago. 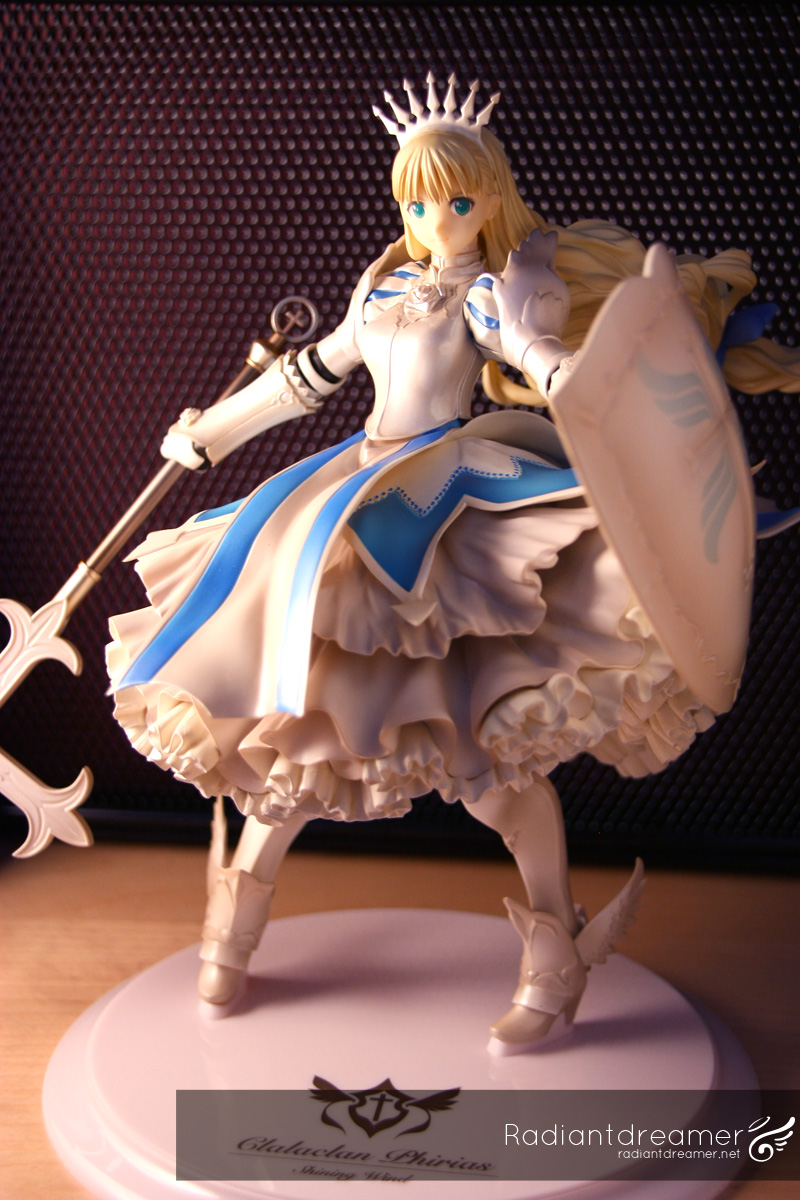 I had always regretted not preordering the generously endowed Clalaclan by Kotobukiya because of the absolutely gorgeous dress and shield. It was a unique figure that is still very unique. So when this Alter version appeared, I jumped on it without hesitation.

A review and maybe a Photoshop may come sometime soon, so stay tuned!

I create stuff in my mind, and try to barf it out onto tangible mediums such as Photoshop, and video game art. Sometimes, I get paid to do it because I'm a freelance artist working in the video games industry. Getting paid to do what I love (video games, and art) is my dream come true!
Clalaclan – Beauty in Armor
Radiant’s Quick Update