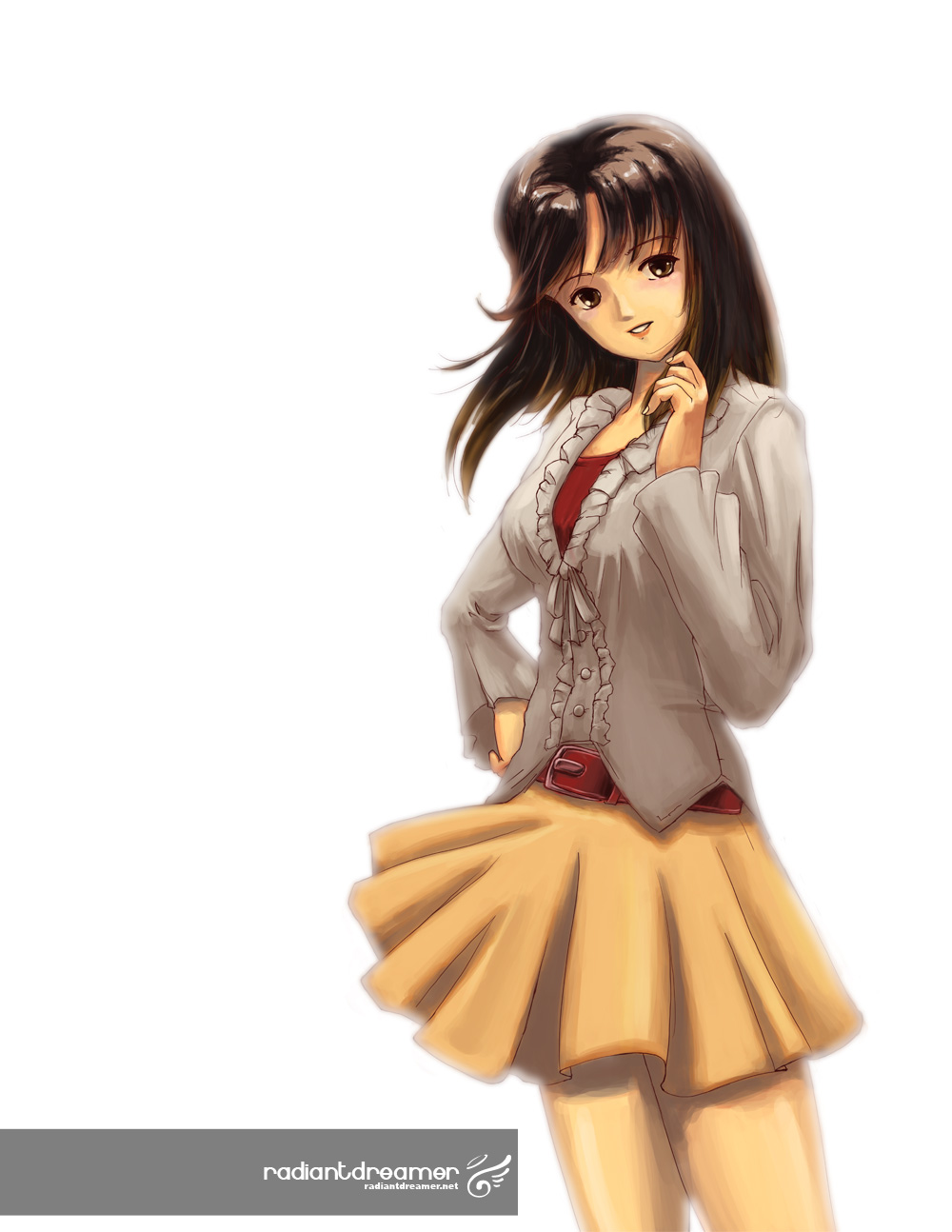 Back in September, I was commissioned by Narrator 1 for a presentation piece for one of his characters, Rina. I’m not really sure of the back story of Rina, or any of the characters associated with her, but the description given to me was:

The protagonist is in her late adolescence, though not yet an adult. She has a figure that could best be described as “cute” (think Mikuru – large but not overly so bustline on a relatively small frame). Green eyes. Straight, two-tone (black, but with blond tips at the ends), loose hair that runs to her upper back. Has a smile on her face. Wears a casual bust-emphasizing blouse and knee-length skirt ensemble.

As you can tell, the only thing that’s different are the two-tone blonde black tips, and green eyes. Those were put in on the final work, but I decided I liked this more subdued color variation for my own works.

She has the same demeanor of a soft feminine girl, but retains a bit of tomboyish feel. Her blouse is a more feminine one with some ruffles on the sleeves, and in the middle button up area, with a contrasting large belt buckle to highlight the bit of tomboy in her.

Her pose has a bit of daintiness to her, holding her left hand up, while still maintaining a bit of tsundere attitude with her right hand on her hip. They complement each other to give her a sense of mischief.

To track my progress, and the time spent on the drawing, I also made a youtube video.

I quite enjoyed working on this piece, even though I feel it wasn’t my best work. I had tried out some new techniques here, including a red under-painting of the skin, which turned out a lot better than I had expected. If you want to learn that technique, pay attention to the video. I use a red under paint before painting the skin on top of it. The result is a much more vibrant shadow color and mid tone.

I create stuff in my mind, and try to barf it out onto tangible mediums such as Photoshop, and video game art. Sometimes, I get paid to do it because I'm a freelance artist working in the video games industry. Getting paid to do what I love (video games, and art) is my dream come true!
My Current Collection – January
Moar Singapore! (part 3 of 4)