Many of you know that I’ve been hella busy on a Super Secret Project. It’s why I haven’t been posting anything lately, and why I have a backlog of events that never got posted. Well, I started a game company: Trickshot Games. After reading many of Danny Choo’s inspiring articles on life, and setting goals, I decided it was time to do something with my own life.

In April, I found myself presented with the opportunity to make a change. That change resulted in me incorporating a company, running through stacks of legal paperwork, and most importantly, making my first game in which I could call my own.

Setting up the company was a lot of work, an incredible learning experience, and a lot of fun. We brainstormed and went through over 100 names for the company, and narrowed it down to three before finally going with Trickshot Games.

The paperwork was overwhelming at first, and I was paranoid about filling in things wrong, but after a while, it became pretty straight-forward. As Danny Choo says, it’s as easy as farting. Well, sort of. Sole Proprietorship is. For me, I needed to incorporate, so it was a tad bit more paperwork, but still not bad. With the Canadian Government, turn-around time for a particular process was either instant, or within a few days. That’s pretty efficient!

In coming up with the logo and the website, I learned a lot about graphic design, which as an illustration artist, I found it quite different from my usual work. 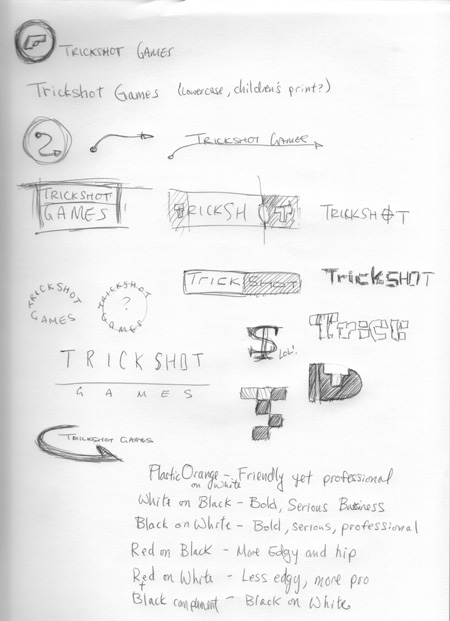 One of the many pages of sketches I did for the logo design. This page was probably the weakest of them all.

After several pages of logos, these were the final ones that we chose from. The one we ended up with was actually a fluke design of messing around with one of the other logos.

I picked up some graphic design books from the library and learned how real graphic designers work and think. After doing so, I now look at radiantdreamer.net and I see all the flaws, as well as all the things that I somehow managed to do right. I don’t think I’ll have the time to go back and redesign it though. At least not now.

Setting up and owning a company is quite exciting. You get a feeling that you’re actually doing something, both for your future, and in the world. You feel like you’re taking a step somewhere, but don’t know where, but you feel like it’s a step in the right direction.

Besides being proud of that, I’m very proud that I’ve finally developed a game that I can say “I made this.” Having been a game developer for 6 years, I was always making a game for someone else. It’s the first time that I’ve truly made a game for myself. I actually didn’t come to this realization until my wife mentioned it to me.

So what exactly is this game that I’ve made? I can’t reveal much right now other than the fact that it’s an iPhone/iPod Touch game, and it’ll retail for 99 cents. The game has been submitted, so it should appear in the app store soon, provided nothing goes wrong (fingers crossed). Please support me when the game is released!

Please do check out the site https://www.trickshotgames.com and follow us on twitter https://twitter.com/trickshotgames for the latest news!

I create stuff in my mind, and try to barf it out onto tangible mediums such as Photoshop, and video game art. Sometimes, I get paid to do it because I'm a freelance artist working in the video games industry. Getting paid to do what I love (video games, and art) is my dream come true!
Noel Vermillion – Blazblue Fan Art
Natalia Luzu Kimlasca Lanvaldear – Kotobukiya