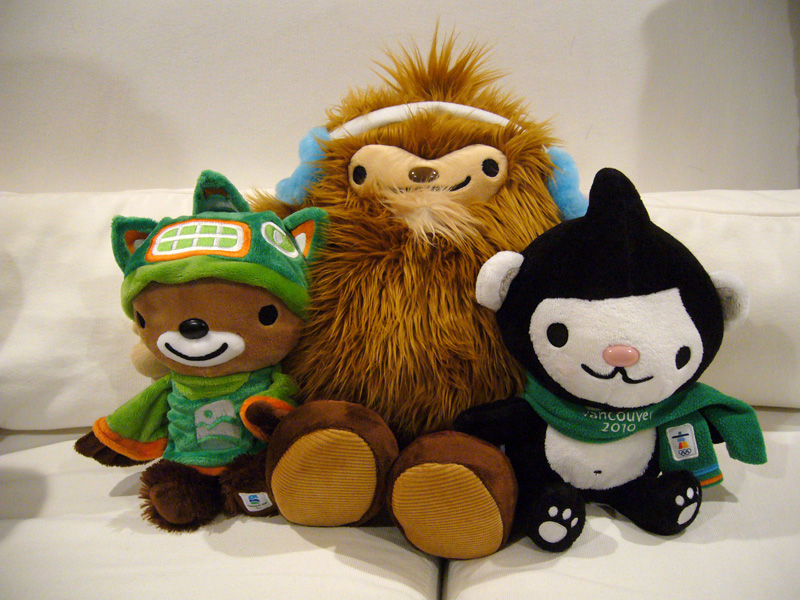 Today completes the collection of our Vancouver 2010 Olympic Mascots. When we first saw them on TV, our immediate reaction was “awww so cute!”. They were designed by famous vancouver artist Vicki Wong, creator of Meomi. My wife and I were very excited when we heard the news of the plushies. Obviously, we went for the larger sized ones. It was only a fraction more expensive, so was well worth it. Unfortunately, at that time, we were only able to find Sumi and Miga. It wasn’t until today, that my friend was able to get us Quatchi. It seems that these 2010 mascots aren’t very well accepted among Vancouverites. I can understand why, but at the same time, I can understand why they were chosen too. The committee probably wanted to appeal to a more international audience, and Sanrio-like characters were generally accepted as such. As one opinion suggested, it’s far better than some of the other mascots from other olympic events. I do have to applaud Beijing for theirs though. While the costume versions look very much like unappealing weird alien creatures, the illustrations truly capture the culture and essence of China.

Overall, I’m a sucker for cute stuff, and these three plushies are a welcome addition to the house, and I think, represent the cultural backgrounds of Vancouver very well without being boring.

I create stuff in my mind, and try to barf it out onto tangible mediums such as Photoshop, and video game art. Sometimes, I get paid to do it because I'm a freelance artist working in the video games industry. Getting paid to do what I love (video games, and art) is my dream come true!
Kino’s Journey Ends with Emiya
The Final Encore of Suzumiya Haruhi