Gaming Trends 2011 – How to Balance Your Gaming Lifestyle

For years, I’ve been tracking my gaming habits. It’s helped me figure out my life patterns, purchasing habits, and curb my spending.

Most of all, it will help you improve your lifestyle, prevent gaming from destroying your life, while still maintaining a balance of enjoyment without overindulgence.

Need a good New Year’s resolution? This one will change your life!

A lot of my readers have commented over the years, saying that it’s a good idea, but sounds intimidating and tedious. I can tell you right now, it’s not. I only have to update the tracking sheet once a month (that’s 12 times only!) and each time takes about 5 minutes.

Others have asked “Why not use backloggery?” Because Backloggery is just a games list. My method gives SO much more information with about the same amount of work.

Nopy raised a good point saying that by tracking, it may take the enjoyment out of gaming. I used to think that way. It makes sense, and may not be for everyone.

But I would like to point out – this is a tracking sheet, and not a schedule. A schedule imposes deadlines and goals, and pressure to meet those deadlines. Tracking records and provides you information so that you can plan and make better decisions. My enjoyment of gaming has not changed since I started tracking. In fact, my enjoyment has improved because of it. (more on that later)

I will explain how this works, and how easy it is to set up. Then I’ll show you the fruits of my labor, and illustrate to you how it can be helpful.

I keep track of my gaming habits using a simple excel spreadsheet. You can download the one I use, right here. 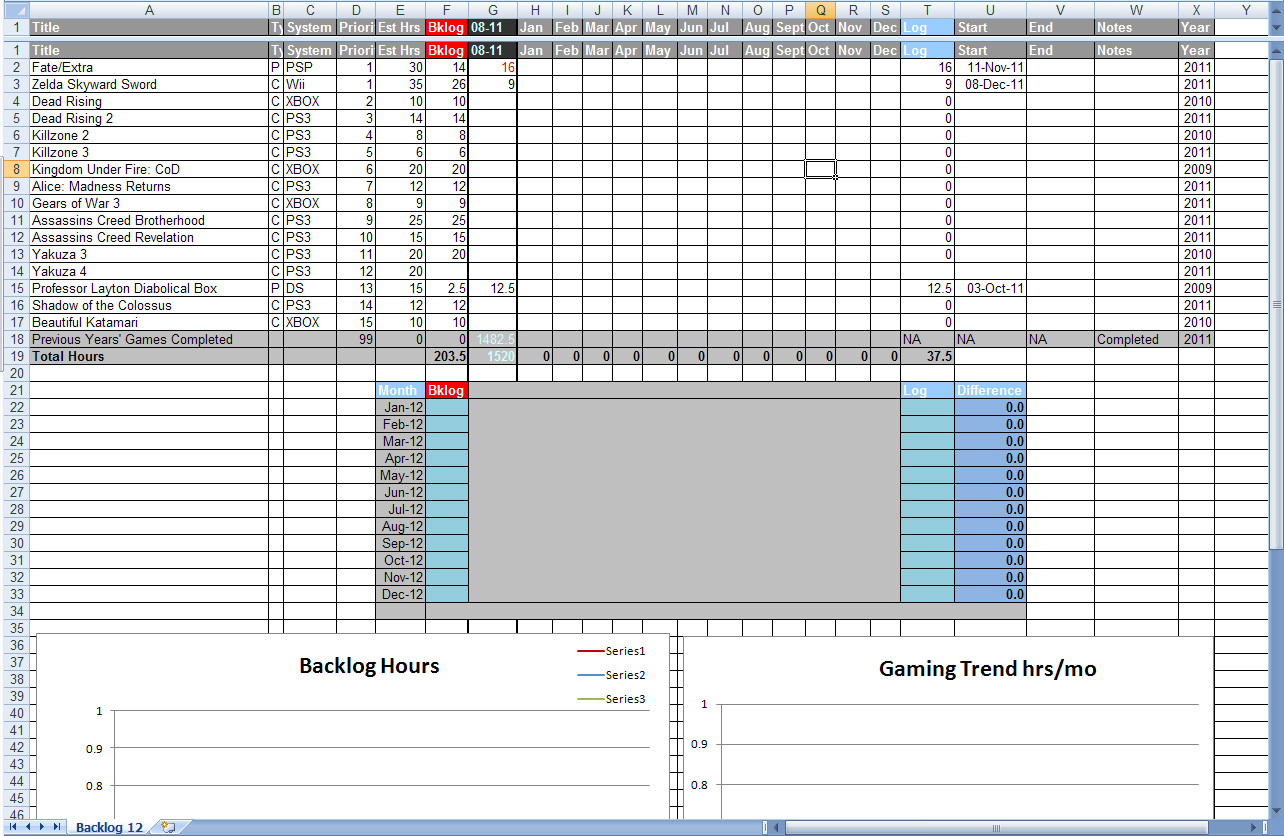 This is what it looks like when you open it up. Looks complicated, but it isn’t. A lot of it is automated! I’ve even pre-filled it with my gaming backlog for 2012. Let’s start with the header items. The only real important stuff is Title, priority, estimated hours, , Bklog, log, and Jan-Dec. Everything else is optional.

Title – obvious. The title you are going to play goes here.

Est Hrs – The estimated hours required to beat this game. I get this number from howlongtobeat.com.

Bklog – The backlog number. This will automatically fill once you put in your Est Hrs. The number will go down as you fill in the hours in the months fields. The formula is simple Bklog = Est Hrs – Log.

Log – This is also automatic. It will increase as you log hours. The formula is simple it’s the sum of all the months of gaming.

Type – C is for Console, P is for Portable. This is just for you to sort and see how many portable games you have vs console games. And if you’re like me, I play one portable game, and one console game at the same time. You can sort by this to pick your priorities.

System – Just a label to see what console it’s for.

08-11 – This is just a way to “carry forward” your previous year’s log. So in 2011, I was playing Skyward Sword, and Fate/Extra as well as Professor Layton. I take the log hours and put them here for my 2012. Previous Years’ Games Completed is the total hours logged since I started this thing (2008).

Start/End – this the date I started and completed the game.

Notes – I usually just write Completed here once it’s done, or Give Up if I didn’t finish the game, but decided to stop playing indefinitely. Sometimes I’ll put SELL if I want to get rid of it.

Year – You can either put the vintage of the game, or the year you bought it. I chose the latter. (yes, I have some 2009 games in this backlog!!)

Okay, now for the bottom half that looks really complicated, but also isn’t.

Everything here is pretty much automatic. The Total Hours will sum itself out, and show you the total hours remaining in your backlog, the hours you’ve played per month, and the hours logged in the year. This also automatically fills out your Gaming Trend hrs/mo graph below

Below that, you see a chart. This chart is to track your monthly changes in your log. Only Bklog and Log need concern. I deliberately left the center blank just so it lines up with the same cells above it. Bklog is the total hours remaining per month. Just copy the above number from Total Hours (cell F19) into the cell F22 (just type it in! Don’t copy the formula!). Log is the total hours logged per month. Copy from Log (cell T19) into cell T22. The following month would be row F23 and T23, etc.

Difference will automatically fill in, showing you the discrepancy between your backlog, and hours logged.

Alright, let’s run through how this works:

3. End of the month – Upkeep! Start up your game, and find the save data, it usually shows how many hours you’ve played. Use this formula:

[hours on clock] minus [hours on Log] = total hours for the month.

Punch that number into January. So if it’s a new game, hours on Log is of course, zero.

NOTE: if you ever get a negative number in your Bklog, your estimate is wrong. Change your Est Hrs.

So what do you do if you’ve beat the game in the middle of the month?

1. Do step three from above only. Almost always, you’ll find your estimate to be slightly off (give or take a couple hours). eg, you’ve finished your game, but Bklog still shows 2hrs remaining. Adjust your Est Hrs so that Bklog reads zero.

2. Put “99” in Priority. Then sort. Your game will move down to the bottom of the list.

That pretty much sums everything up. Now, to illustrate how this will help you in the end by using my 2011 backlog as an example 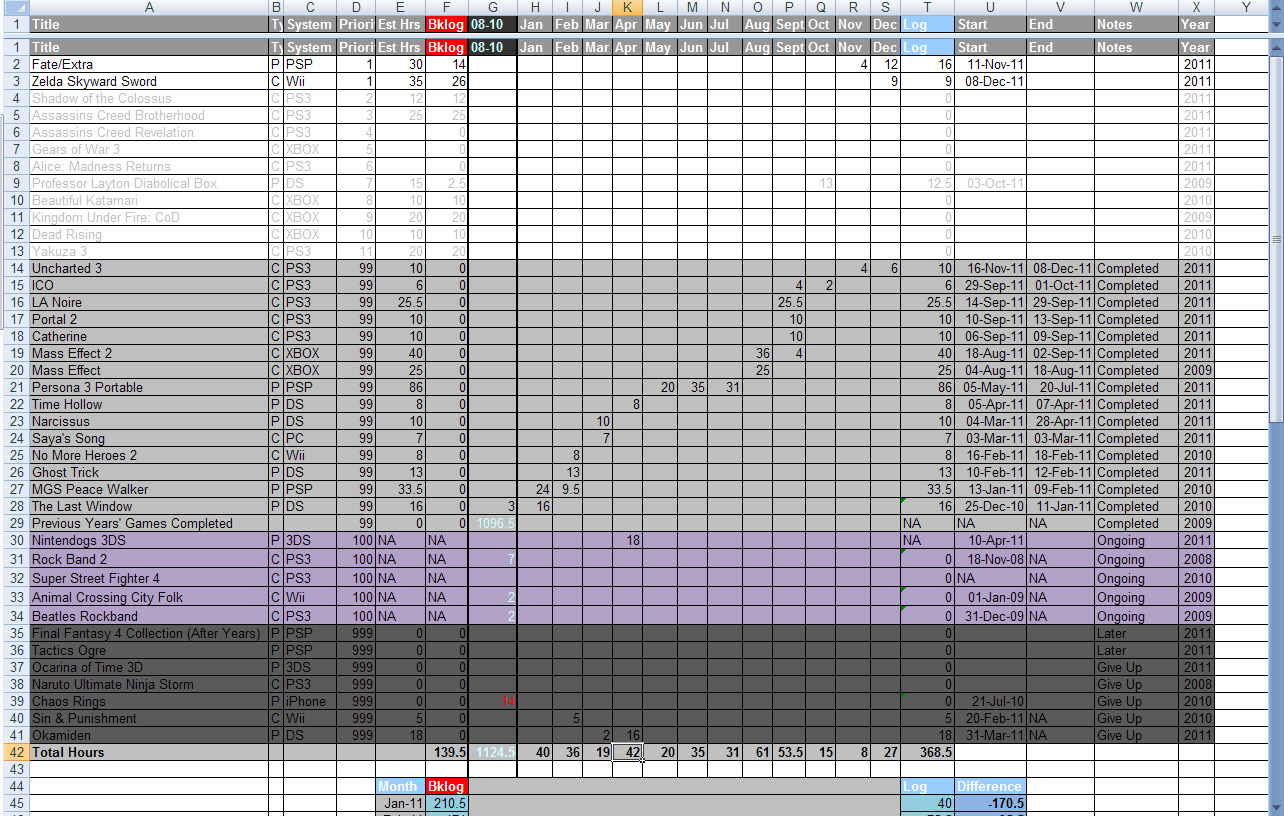 Here are some facts derived:

So what does it all mean?

Now, let’s look at the graphs:

The graph on the right shows my trends over the month. As you can tell, it fluctuates A LOT! I can tell where I had time for gaming, and where I didn’t. I can compare this to last year’s graph, and see how these patterns have changed and for what reason. Last year, my gaming was a constant downward drop, followed by a huge spike before dropping off to nothing. This year, it just bounced around a lot, but gave a more constant average so to speak.

The graph on the left shows the change over time the backlog (red), hours logged (blue) and difference between the two (green). The log will always go up, or plateau. It will never drop because that would be impossible. But it shows a fairly consistent rise. The larger “bump” was due to the spike seen in Aug/Sept (or ME-Crazy-Month).

The Backlog line was consistent for the first half. This isn’t good, because while I was logging hours, the red line wasn’t moving – which means I was buying games as fast as I was beating them. That’s why you see the green line go up and down a bit.

You could see that after September though, I bought more games, as the backlog went back up. But I wasn’t beating them fast enough, because the green line dipped.

I can happily say that I did meet my resolution that I made at the beginning of the year – to play as many good games as possible, and eliminate the bad ones.

It would be difficult to pick a Game of the Year among this list, but for me, Ghost Trick would be the pure 100% enjoyment from beginning to end. PLAY IT. YOU NEED TO. Everything else comes close!

A few games I played, and didn’t have fun playing, didn’t have time for, or felt that it dragged on for too long:

I gave each game a chance of about 20% completion minimum before deciding to drop them.

When I do these little bits of data, I can see patterns in my gaming, and also my priorities in life, as well as what happened. It’s a year in review, and helps me make resolutions for the following year.

In addition, since I update every month, I’m not stuck to a one-year resolution. I make changes every month to accommodate with my life, and my gaming lifestyle.

If I have too much work to do, I know not to buy any more games that month, and place it on a wishlist.

I know how many hours of gaming I can average per month without it destroying my life in the long term, so when I see a huge spike, I’m able to cut back.

With priorities, I’m able to determine whether I should buy that next game. I can also expect whether or not I’ll be able to get to that lower priority game this year.

I can also make buying and selling decisions with it too – like if a game can’t be beat this year, and may not make it down the line, I can consider selling it. Or, if I notice a huge dedication to a particular game for that month, then I know for certain I would like the sequel, or games similar to it. It’s that level of awareness that makes my gaming more optimized.

For this year, I intend to complete my current backlog (I might cut Katamari), and put all games on wishlist purchase. (with the exception of current preorders, and upcoming Limited Edition purchases only). This gives me a sum of 139hrs of backlog, which is very acceptable, and will keep it open for some upcoming titles. I think this year in gaming will be my favorite, as I’m looking forward to the line-up of my preorders mixed with my backlog of want-to-play games!

I create stuff in my mind, and try to barf it out onto tangible mediums such as Photoshop, and video game art. Sometimes, I get paid to do it because I'm a freelance artist working in the video games industry. Getting paid to do what I love (video games, and art) is my dream come true!
Interview with Urobuchi Gen, Iwakami Atsuhiro, and Ota Katsushi
Merry Christmas Everyone!