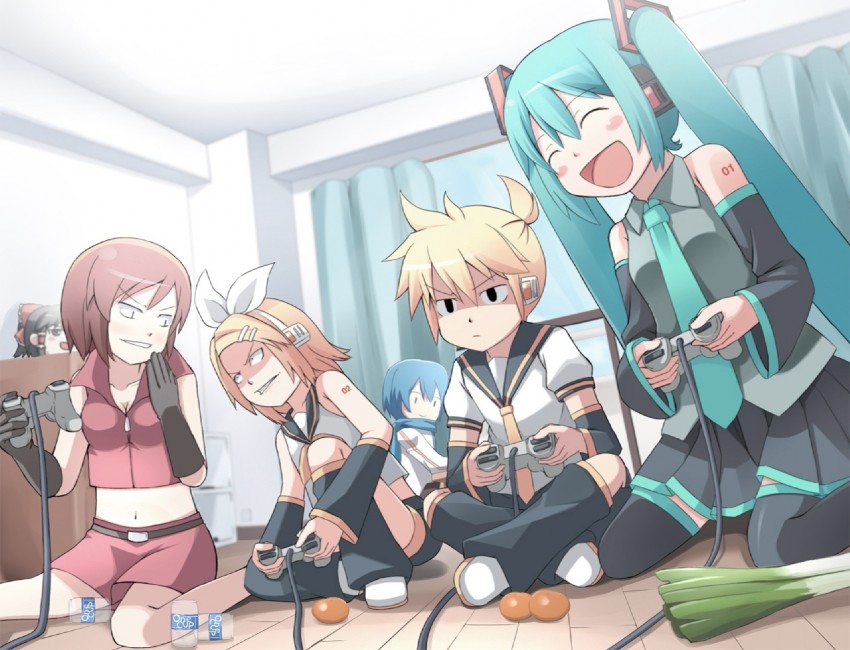 1.5 years ago I started to track my gaming trends, how my life’s events affect it, and vice versa. I wanted to do this so I could literally gauge my habits of gaming by the hour. The results are quite an interesting reality check!

Having been a lead artist, I’ve learned a thing or two about tracking progress. Why didn’t I just use backloggery? Because backloggery is only a games list to brag to your friends on all the games you’ve beaten. I needed something much more detailed.

It felt like only a month ago that I was just starting to track my progress on Crisis Core, a game that carried over from 2008. Hard to believe that it’s already been a full 365 days since then!

So how do I go about doing this? I have an excel sheet (you can download the google docs version here) Every month, at the end of the month, I turn on the games I played, and check the game clock, subtract it from the hours logged previously, and that gives me the hours logged in the month. If a game doesn’t have clock in it, then I have to be more diligent in logging my hours. 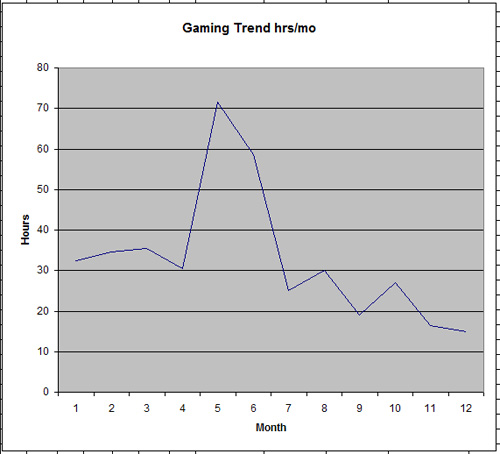 This is my gaming trend on a per month basis. Many people average higher number of hours per month than I do. I averaged around 35hrs/month during the first bit of 2009.

In May, I spiked at 71.5hrs. This was a heavy gaming month as I completed several games, including Tomb Raider Underworld, No More Heroes, Heavenly Sword (which I had been putting off halfway since late 2008), Klonoa, and two big ones at 18hrs each, Resident Evil 4, and Dragon Quest V.

The spike happened when I started establishing my company. There was a lot of waiting around while paperwork was being processed, and my programmer partner was figuring things out on the programming side of things.

The following month was no better, at 59hrs. 30 of those were put into a new game – Crimson Gem Saga for PSP. Awesome awesome game! At the time, I also jumped into Eternal Sonata (PS3) for 5hrs, and Lux Pain (a super cool Persona style visual novel for DS), and finishing off DQV with 9hrs. My programmer was busy at this time prototyping our game. No real art was required at the time, and nothing was set in stone just yet.

I usually play one game at a time – one handheld game, and one console game, to completion. So basically, after finishing DQV, I jumped onto CGS, and then started Lux Pain.

In July, a HUGE drop happened. Lowest number of hours in that year. This was when things started to pick up for trickshot games and art was needed everywhere. The game was done pretty quickly, but the following months were critical, as I had to start advertising everywhere. July was also when my blog started picking up steam again as well.

November saw the least number of hours – a pathetic 16.5hrs, probably due to the fact that half of the month was spent having fun in Singapore. I took my DS with me (and 6 games), and played 0hrs on the plane. I logged about 5hrs on Atelier Annie (a very good lighthearted game)

December looks worse because I hadn’t put in my hours yet. It actually goes back up to 25hrs.

It’s interesting to see my gaming trend slowly becoming less and less, at the same time, still go up and down like a roller coaster. I notice that when I focus on something, everything else doesn’t matter – until next month or something. 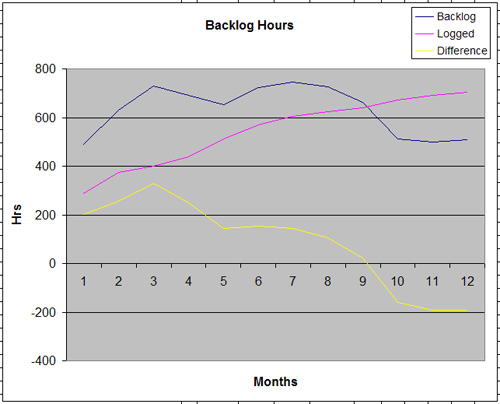 Above, is my backlog of hours. The blue line indicates my estimated backlog of games in my pile. (this estimate is fairly accurate, based on other people’s findings by searching the term “long” on the gamefaq message boards for a particular game). The pink line is the hours I’ve invested into gaming. The yellow line indicates the difference between them. Since the amount of hours logged is fairly constant, that explains why it looks similar to the backlog.

The numbers don’t start at zero because these are carried over from last year. Last year’s data wasn’t nearly as well thought out.

At about July, the backlog reaches a peak, and slowly starts to go downwards. Summer is usually a dry spell, as games are being pushed for Black Friday/fall releases. You’ll notice in November, it starts to slowly climb again.

In September, the two lines cross, and the yellow line starts to fall below zero. This point is where I started cutting out some of my backlog, shelving some games for good, marked as “Give up, I’ll never play this game anymore.” If these 2 lines cross again, that’s bad news.

The highest point in the backlog was March – sitting at 729.5hrs. If I were to not buy any games, and just play, I would have to average 60hrs per month! Not an easy feat when my average is 30hrs/mo. I had logged 299.5hrs at this point, so a difference of 330hrs.

Reaching December, I had logged 712.5hrs in total, but my backlog was at 501.5! Only 228hrs dropped off the backlog – meaning I bought an additional 413hrs worth of games since March! Actually, that number is wrong, because remember I trimmed my backlog in October? Sept – Oct was a difference of 152hrs. I played 27hrs that month, meaning I trimmed 125hrs off that backlog. Now I’m confused – I either bought 538hrs worth of games, or I bought 288hrs worth of games. 😛

It’s nice to see my backlog sort of leveling out now, but it’s starting to climb a little again (Christmas presents!). Fortunately, the first few months of the year seem quiet, so it’s a good opportunity to whittle my backlog down some more. 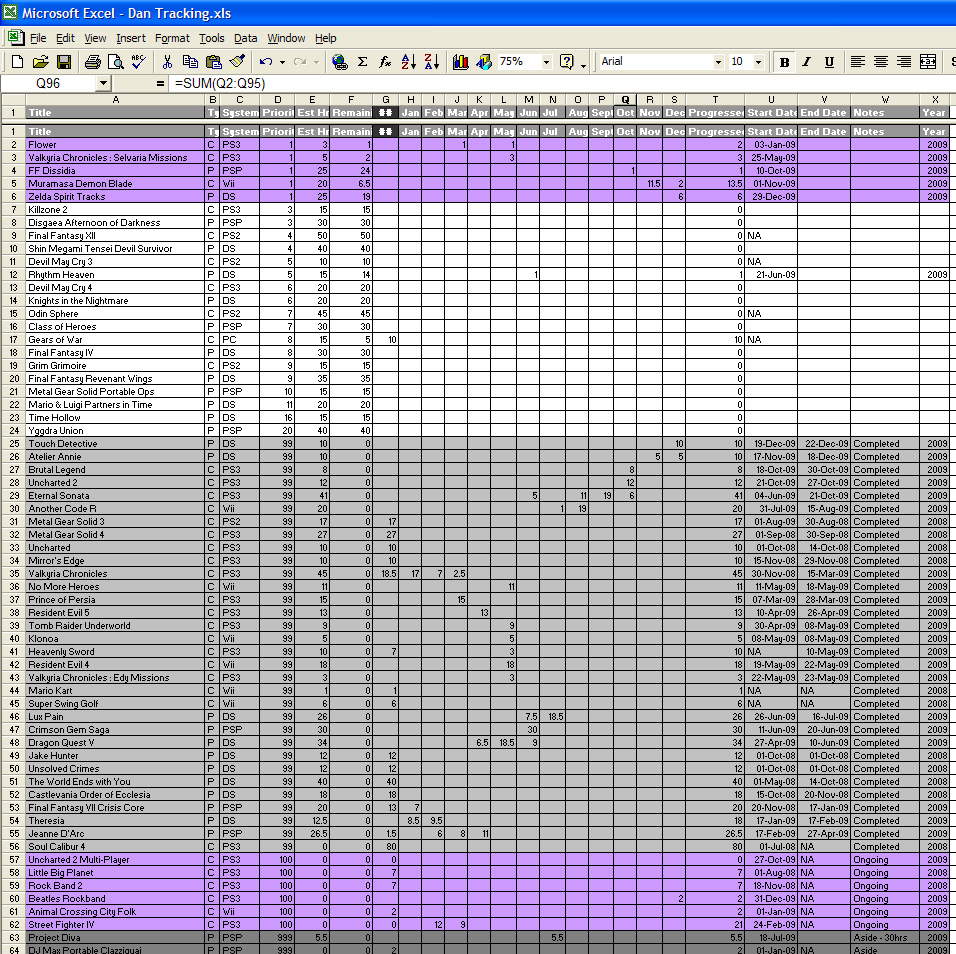 Click the image to see my excel sheet, and a whack of games!

That’s my tracking sheet! The one with the ## are the carry-over hours from 2008. The purple games are the ones I’m currently playing, the white ones are the backlog, the light gray are the completed games, and the dark gray are the games I’ve given up on.

Interestingly, there aren’t a whole lot of games in the backlog – but that totals over 500hrs. That’s a harsh reality check for some of you gamers!

In 2009, I completed 21 games. I only have 8 games completed for 2008, since I didn’t start tracking until mid year. What I find also interesting is that Soul Calibur 4 is the highest number of hours I’ve played on my list, at 80hrs, but I haven’t played it for over a year!

Second longest game of the year was Valkyria Chronicles at 45hrs followed by Eternal Sonata at 41hrs. Both games look absolutely beautiful and have solid, incredible gameplay. You’re missing out if you haven’t played these.

The game that spans the most months without being completed so far is Flower (youtube link). I bought it in Spring, and played only 2 hours worth of it. A few more months, and it will be about a year since I’ve played it. I guess I’ll finish it when Spring comes around.

Looking at some of these games that I’ve completed, I remember what I was doing in life at the time, and as a result, why my hours were affected. It also shows a trend of my gaming preferences at that time of year, and possibly why as well. Sometimes, it was just to get the game off my backlog list, other times, I got sick, and couldn’t play action oriented games effectively. Or in the best cases, I just felt like playing that game.

Overall, it’s been an interesting year – now I can come up with a more thought out New Year’s resolution depending on my priorities! (one of which is to buy less games!)

So the games I’ve completed this year (in order):

If you are interested in trying out my spreadsheet for yourself, you can grab this one, and delete all the old data (don’t accidentally delete the formulas!) or use this blank one. The only thing you need to fill out are Title, Type (C for Console, P for Portable), System, Priority, Estimated Hours, and Start Date. Put your hours in each month, and it will automatically figure out the hours remaining, and hours logged.

Hope everyone is having an awesome start to their New Year!

I create stuff in my mind, and try to barf it out onto tangible mediums such as Photoshop, and video game art. Sometimes, I get paid to do it because I'm a freelance artist working in the video games industry. Getting paid to do what I love (video games, and art) is my dream come true!
L
Christmas Miku! Happy Holidays from Radiantdreamer!