Broken Pegs and How to Fix Them – The Rise of Rize 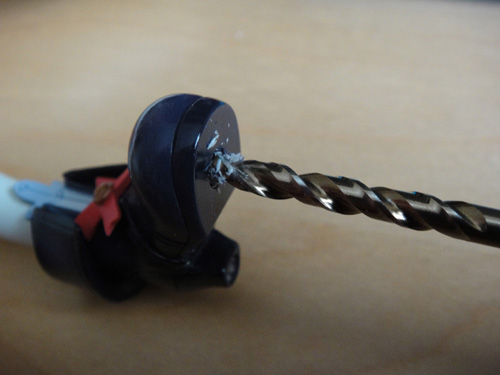 If your figures have this problem, you will surely benefit from this post. Some of you may remember this image from one of my random photo posts. You may shudder now, but read on to find out the good this ends up being.

Some time ago, actually almost two years ago, Rize’s pegs broke. ALL OF THEM. This is a very common issue with Rize. Countless people seem to have experienced the same thing.

I never really got off my ass to fix this problem for two whole years. I basically used the wake of Rize’s skirt to lean against the back wall of my Detolf, making her stand properly, as seen in this picture: 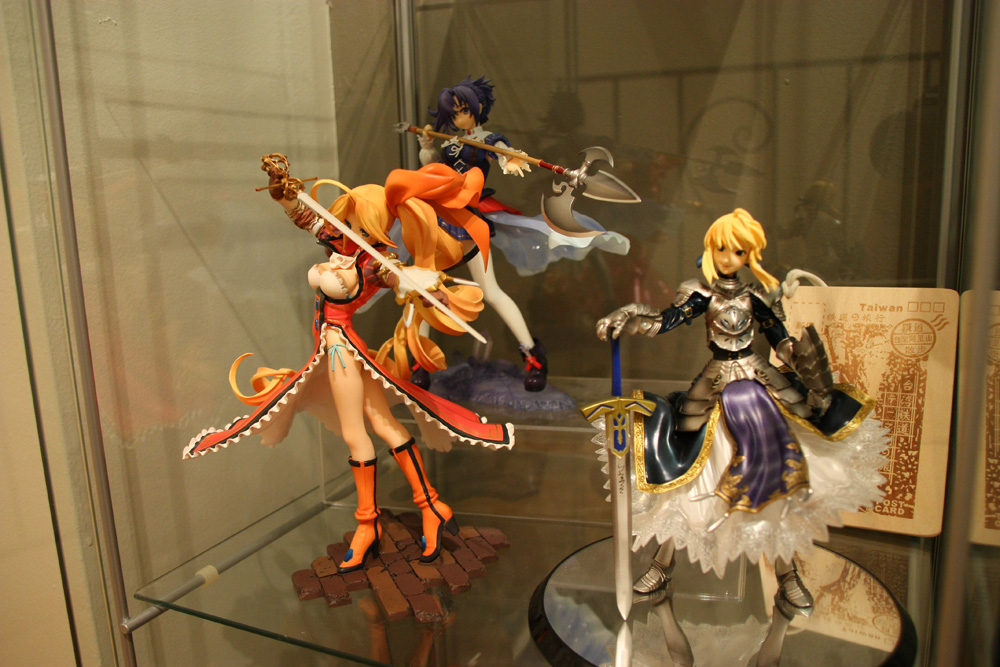 (btw, I also solved the problem of her Halberd not fitting in her palm by jamming it in her corset between her breasts.) 🙂

So a couple months ago, I decided that I might as well get that done. What triggered it was after Elwing’s peg broke. Remember when I posted my January Collection, and it has Elwing in it? Well, the peg was already broken in that picture. She’s also wall leaning.

I kinda got fed up with it eventually and went to a hobby store to buy a metal rod. I brought the component parts of Rize and Elwings legs and bases with me so I could find a comparable rod diameter to use. These rods of various gauges are available at pretty much any hobby store or crafts store. (I remember seeing one in Singapore during my outing with the comrades). Of course, I couldn’t find one that was exactly the right fit, but pretty close. It was better to get one that was bigger than the hole, than to get one smaller, so you can get a tight fit. 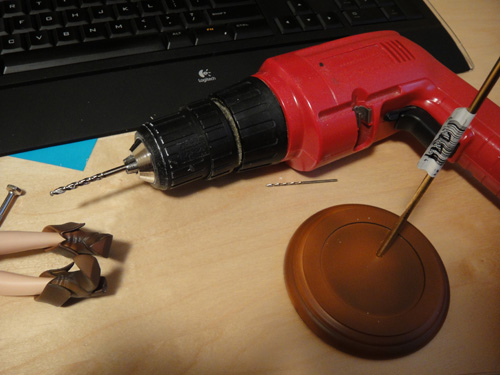 The procedure is actually very simple. It just requires patience, and a steady hand. The tools needed is a simple power drill, or even a hand drill if you feel so inclined. You also need two drill bits, a hacksaw, and some sandpaper. These materials can be purchased at any hardware store for under $15. The rod I got was a 5/32, the drill bits were 1/16 and 9/64. You’ll also need some sort of super glue, which I recommend you get at the hobby store. There are some incredible glues out there, such as Kodomut’s recommendation, Selley’s and other similar products.

First thing’s first… turn your power drill to the lowest possible setting. You won’t be drilling it very fast. Practice controlling the speed by pulling on the trigger gently. It is analog after all. 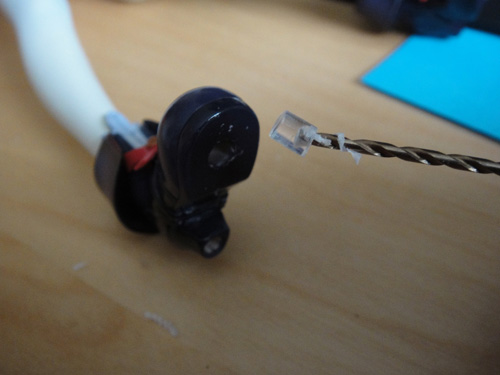 The first thing I did was remove the broken peg that was inside of Rize’s hole (sorry, that sounded very sexual). Using the 1/8 drill, I gently and slowly drilled into the peg at an angle (you don’t want to do it straight on 😛 :P). With it being an angle, you will get a lot more grip, making it easier to remove the peg. I gently pulled the peg out. There is a possibility that the peg will simply break and you won’t be able to grip it out. It’s not a loss though. That’s when you use the drill bit to drill around the peg to break it up and just pluck out the bits a little bit at a time.

Next, I used the larger drill bit and very lightly cut around the hole to make it bigger, testing it by trying to insert the rod every so often. I didn’t use the power drill for this, and simply held the bit in my hand and spun it around. It’s more controlled and accurate that way. You don’t want to drill the hole deeper anyway. 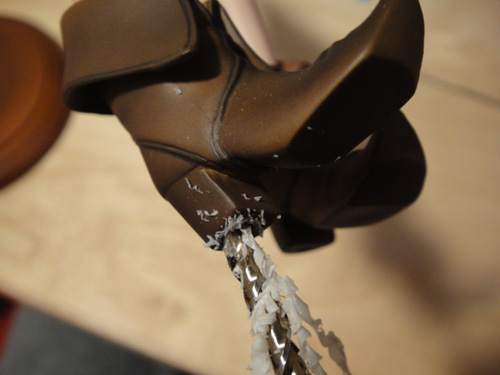 Elwing’s peg was too deep and could not be removed with the same method. So I basically had to drill it out. A nice swirling length of PVC trails come out. 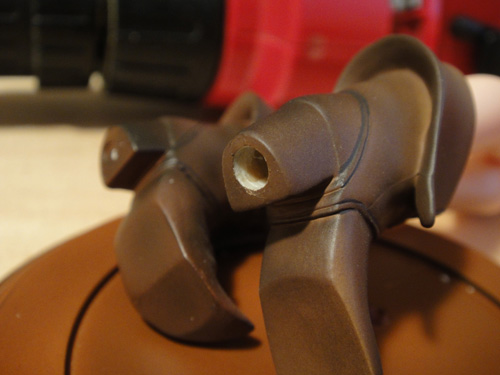 The hole looks clean and perfect. Remember not to drill too deep. You don’t need it to go that far. 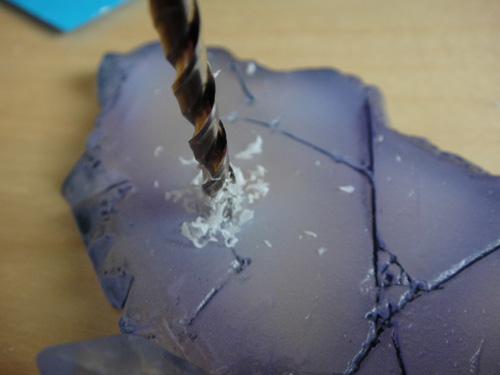 Next, I drilled a hole in the base. Use the power drill for this. Be very slow and careful about this. You don’t want to drill it all the way through to the other side. Pull the drill bit out periodically, clean out everything, and check the depth. How deep it goes isn’t super important. You just need a bit of depth. 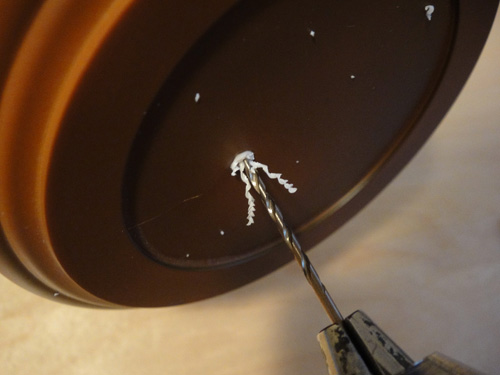 Elwing’s peg is a little strange. It’s a detachable PVC (weaksauce) peg that gets plugged into both her leg and her base. I don’t know why they didn’t make the peg part of the base; since it’s hard ABS, it would be more durable. I used the 1/8 bit to yank the peg out. 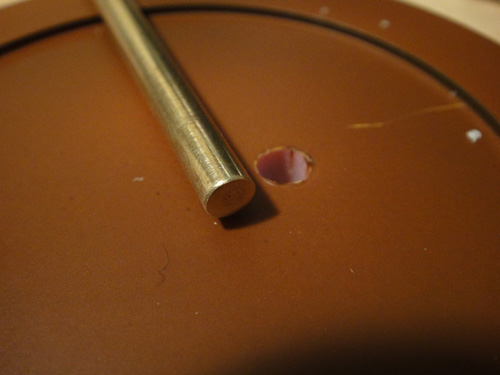 The base needed a bit of drilling too. Since it was ABS, manual hand spinning wouldn’t work, so the power drill was used. Again, being careful. 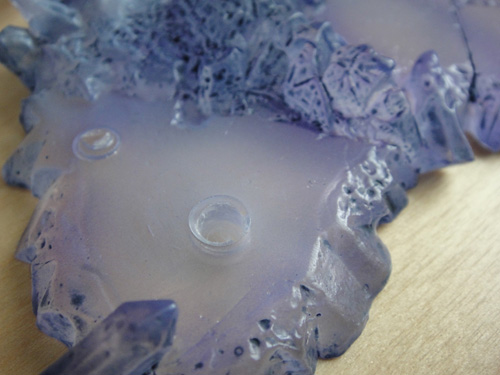 Rize’s base now has a nice clean hole in it. 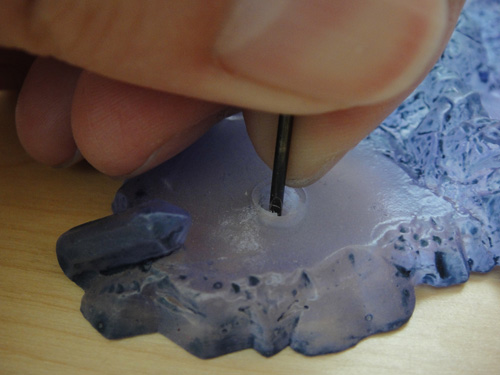 To get the proper size of the peg, you need to measure it out. Not an easy task since no ruler would ever fit in there. So what you do is take the 1/8 bit, or a small screwdriver, whatever, and place it in the center of the hole. Hold your fingernail at the top of the hole. You now have your depth of the peg. Don’t let go or move your fingernail yet. 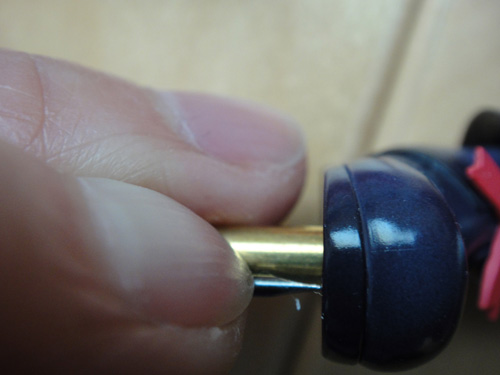 Next, insert the rod into the leg, and put the 1/8 bit up against the edge. The spot where your fingernail ends up is where you should make your mark.

Another way you can do this is to use your fingernail marking and put it against a ruler. Write down the measurement, and repeat with the leg hole. Add the two numbers together, and you’ve got your peg length. 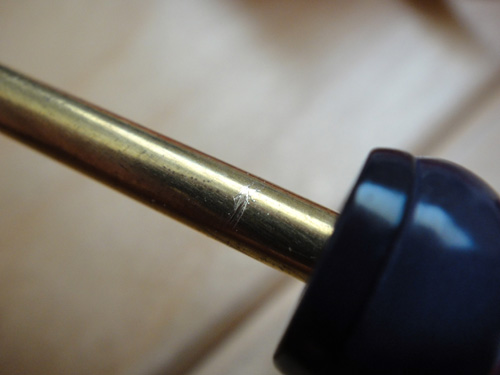 Mark the peg by scratching it either with a pen knife, the drill bit, or other sharp object. Since this is a brass rod, it’s very easy to mark. This is your cut line. 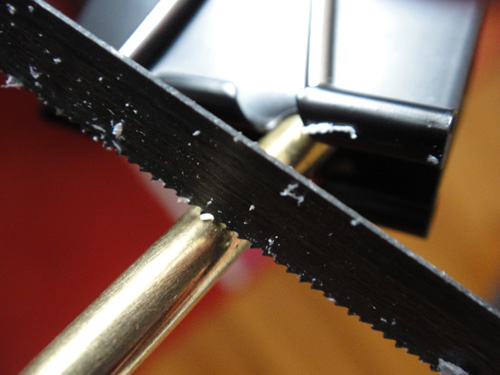 Small hacksaws are easy to find at a hardware store and should only cost about $10 at most. They’re only about a mm thick and is ideal for hobby stuff such as this. Place the rod at the edge of the table and carefully start cutting the peg. If you’re afraid of dropping and losing the peg, place a bulldog clip or a large piece of tape at the end of it. 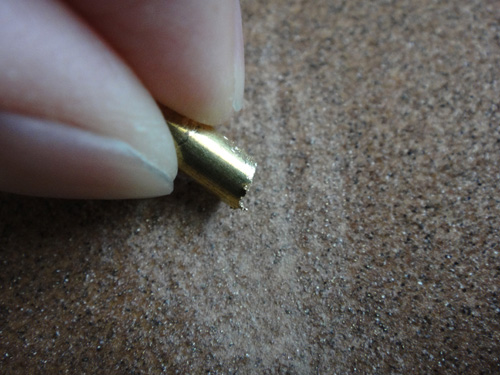 After the peg has been cut, sand off the edge of it to make it look nice, if you want to. It’s not necessary, but the cut may be off angle, so you can sand it straight this way too. The grit I used was about 100 grit. If you want a nice smooth finish, you can use a 500 or 1000 grit after that. 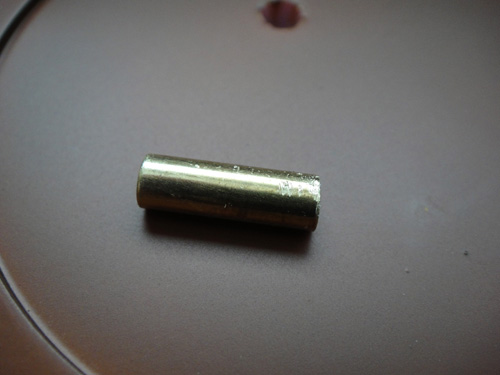 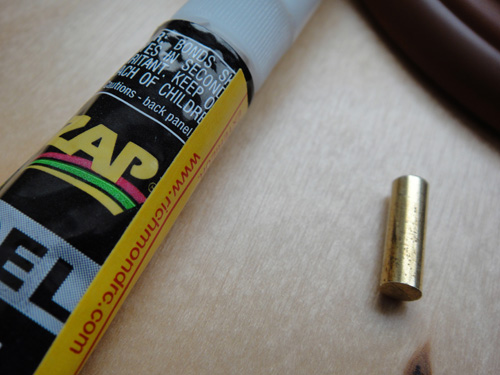 The glue I chose was this awesome glue called Zap Gel. As you can see, it’s a very small tube, and it cost me $7. But this thing packs a powerful punch. One single dab of this will hold practically ANYTHING together, and will be permanent. You’d sooner break what it’s holding than it breaking the bond. This glue is ideal because not many glues will bond metal. You don’t even have to prep the surface or anything too!

As such, it’s a good idea to test your fitting completely before gluing it down. 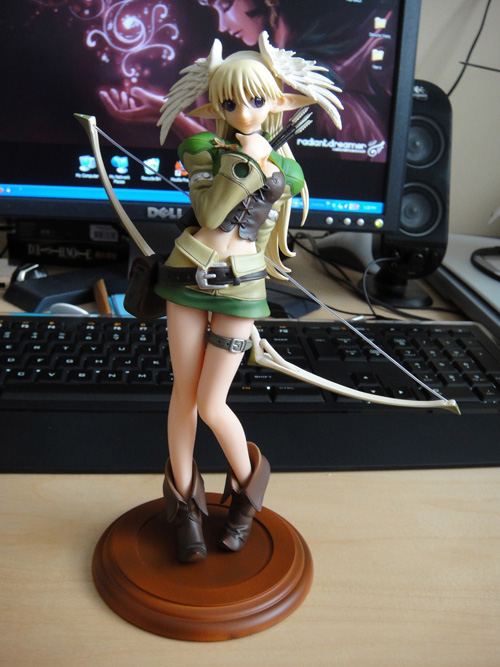 Elwing is fixed. She stands perfect. I decided to place her peg in the base rather than in her leg. She’s actually able to stand without a base! But very dangerous to do so. 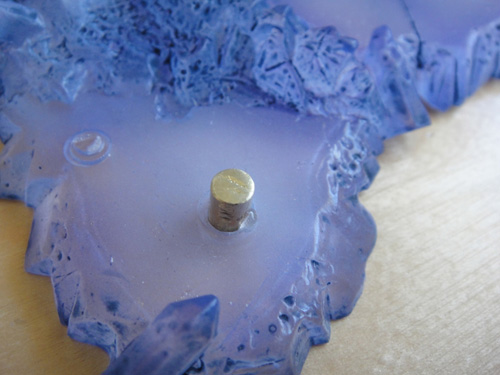 This is Rize’s completed peg. After placing the peg in, the glue must be allowed to cure and dry. It only takes 15 seconds to bond, and maybe 2 minutes to dry. 24hrs for a full cure. I didn’t want to take any chances and risk having Rize permanently glued to the base, so I let it sit for a good couple of hours.

An extra cautionary note on Rize’s peg. Make sure that it’s the full and proper size. If it’s too short, or the hole too big, the peg won’t be able to grip the inside of the hole, and Rize will fall off because of the weight. 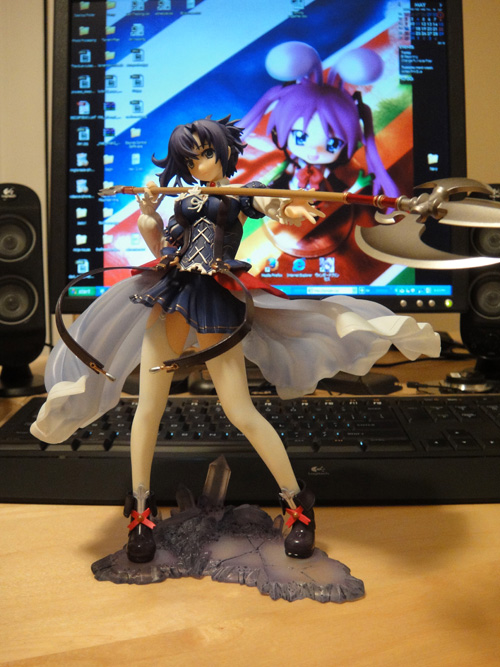 Rize completed. Notice that the wallpaper is different. I had abandoned this procedure mid-project as other things started to pick up. Apologies on that!

Hopefully, this tutorial will inspire you to give it a try, and breathe new life into Rize. If you do attempt this, and need more instructions or help, feel free to leave a comment here, and I will help you as best as I can.

Also, if you do successfully fix your Rize, do post pictures and let me know!

I create stuff in my mind, and try to barf it out onto tangible mediums such as Photoshop, and video game art. Sometimes, I get paid to do it because I'm a freelance artist working in the video games industry. Getting paid to do what I love (video games, and art) is my dream come true!
Figure Care – Dusting, Cleaning, and Leaning!
Dental Time! Another Megapost!