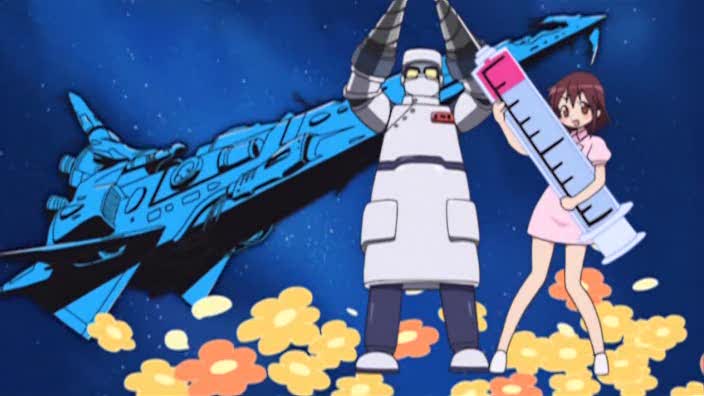 Drill drill drill! Your teeth are gonna get pwned!

Well, my busy schedule has slowed down a tad bit, but not enough to make me breathe a sigh of relief yet.  There are some loose ends to tie up for certain, but it looks like I might be able to give myself a breather soon. So in the meantime, I thought I’d talk about some things that have been happening in my life.

It must be dental check-up season, as I’ve noticed my blog stats have skyrocketed, with the majority of hits going to my Root Canal post that I wrote last year. Incidentally, I had a dental appointment a few days ago to get my teeth cleaned. It was then that I mentioned that one of my teeth seems a little sensitive when I’m eating. I was being cautious because that tooth also had a crack in it that we noticed from the previous check-up. At that time, my dentist said that the crack seems harmless right now, but if anything weird happens that I should let her know.

The teeth cleaning was fine. Ever since my root canal, I had vowed to do my best to keep my teeth cleaner. I’ve even bought an electric tooth brush too!

My dentist decided that it might be a good idea to remove the old filling for that tooth and fill the crack while she’s at it, so I had another appointment the following day. The filling procedure had a hiccup, and that was during the injection of the anesthesia/freezing. These past few years, every time I get one of those needles jabbed in me, I start to feel woozy. Not sure if it’s because I’m getting a panic attack, or if the anesthesia was going to my head. Whatever it is, it didn’t feel good, and not only that, the freezing didn’t really work (I felt a bit of pain when the drill came around). I’m wondering if my dentist put the needle too far into the back of my mouth rather than the front…

During the filling, she found a cavity inside, basically where the crack was. It’s a good thing that this filling was re-done, otherwise I might have been on my way to yet another root canal procedure! However, 24hrs after the filling was done, my tooth feels a slight bit of pain when I eat or drink. This is raising a bit of concern for me, as usually teeth don’t hurt after doing a filling, unless the filling was deep, which of course has its own complications… it may lead to a root canal procedure. Internet searches show that it’s fairly common, and does go away. But if it doesn’t, then that’s a sign of a potential root canal attack. 🙁

Next week, I have to go back again, this time to get a crown fitted over the tooth that got the root canal procedure. Some info for you if you don’t know – after a root canal procedure, your tooth is basically a dead, empty shell. The nerve is no longer there to provide nutrients to your tooth, and it eventually becomes brittle, and can possibly even shatter. To prevent that from happening, they put a crown over the tooth to protect it.

I was supposed to get that done as soon as possible. Basically half a year or so later, after things have settled down in my tooth and I don’t get any re-infections. But I’ve been dreading this procedure more than the root canal procedure itself now. Think for a moment – how do they get a crown over your tooth? Where is the room for it? The answer? Not sure you want to hear it – they literally file and sand your tooth down to a nub, and place the crown on top of that.

Now you see why I’m dreading this?! But I suppose it’s inevitable. I’d rather do that, than have my tooth potentially shatter on me and they’d have to remove the bits…

Enough talk about teeth!! All I can say is KEEP YOUR TEETH CLEAN!

Cleaning Out The Trash

A few weeks ago, I took pix of half of my figures (you saw). In addition, I went through all of my old anime/jpop cds and old manga, and decided to donate a bunch to the library, but retracted that decision when a friend of mine recommended a bookstore called “Book-Off“.

They’re apparently a huge company that deals specifically with pre-owned books, cds, video games, and dvds. They take pretty much ANYTHING that you give them within Japanese pop-culture, no matter how old. Just don’t expect to get good returns. Most of my CDs fetched only a dollar. But my biggest concern was simply clearing out space. And a dollar was better than nothing if I had opted to donate to the library instead.

Book-Off didn’t take “fake” CDs though. You know, those rip-offs from Taiwan like SM Records and such? That’s when my friend recommended Halfmoon Bookstore. It’s been around a lot longer than Book-Off, and they used to be located downtown. I used to know the owner back then until they changed ownership. I had no idea they took pre-owned books and cds. They fetched a better price there, and they’re more targeted towards anime/manga than the more general Book-Off.

I’ll try to take pics of these two places the next time I go.

I did like Book-Off’s selection, though. I ended up spending quite a bit there, my loot being the Supercell Miku CD, the Japanese version of Final Fantasy Tactics, and Shinkai Collection. I also bought the Princess Ai manga collection from Halfmoon. 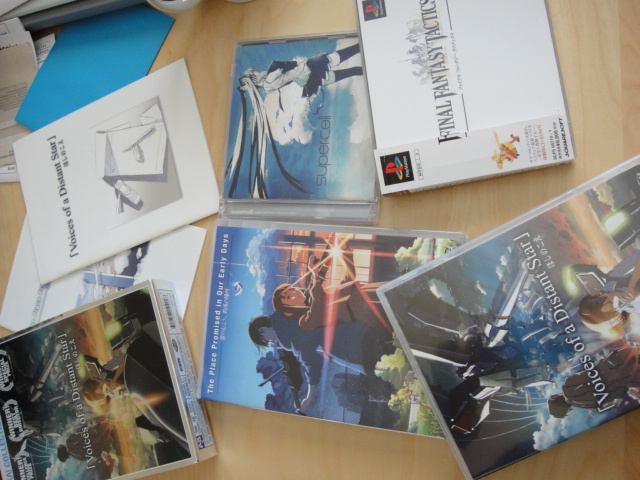 I spent more than I brought in.

So how much stuff did I end up bringing in? About the size of a Yotsubox, weighing maybe 20lbs or more, and I came home with 4 discs. 😛

I highly recommend the Shinkai collection. Especially Voices of a Distant Star. It’s a very good anime apparently created by one person.

Even though I had the english version (non-greatest hits) of Final Fantasy Tactics, the Japanese version was only $12, so why not? 🙂

I intend to go back to these two places this week, as I’ve got another small stack of goods to trade-in, and maybe some more things to buy… O_o;

During this “close to a month” hiatus, I’ve had little time to play video games. Resonance of Fate still sits at pretty much the same place the last time I talked about it. I did however, manage to finish the new Ace Attorney though. According to my tracker, it’s taken exactly one month to do, with a mere 10hr investment. The majority of the time, I played while I should be in bed sleeping, not playing video games in the dark. I believe it’s the fastest I’ve ever finished an Ace Attorney game, with Phoenix Wright 1 being the longest.

I’d have to say that I liked it. It’s pretty much like all the other Ace Attorney games, except it isn’t a courtroom setting. This opens it up and changes the pacing, because it’s no longer restricted to the solid pacing of Investigating > Courtroom > Investigating >Courtroom etc. The designers could essentially pace it however they want with whatever flexibility they want.

The new sprite-based aspect of it lends itself well to traditional point-and-click style gameplay, but more importantly, you get a much greater scope of action rather than simple still portrait shots of characters.

Overall, this is by far the best designed Ace Attorney game yet. The only problem I found was the incredibly large plot-holes that resulted from taking several liberties for the sake of convenience, and simplification. Things like “I know I can trust his statement because he’d never do something that stupid.” and it ends up being fact.

The design and execution of the game is well done, the characters were entertaining, the cases were fun and actually got you thinking, and the updated graphics look great to boot.

So I’ll end this post with other quick blurbs… 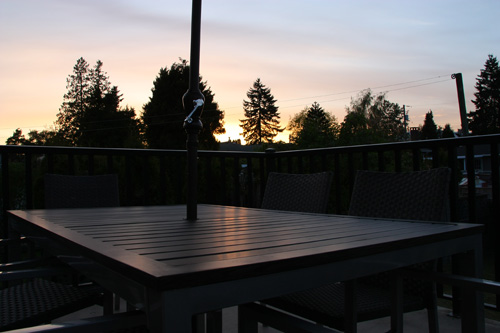 I got myself a new patio set. On sale for 25% off! Just in time for summer. Wanted to get patio furniture last year, but ended up deciding too late. The summer season was close to over, and the set that I wanted was 75% off, but didn’t have any complete stock (You have to buy the chairs and table separately). This year, I decided to just settle with 25% off, and I get to use it for the whole summer! I was going to write this blog post on my laptop outside, but it’s charging. So maybe next time. 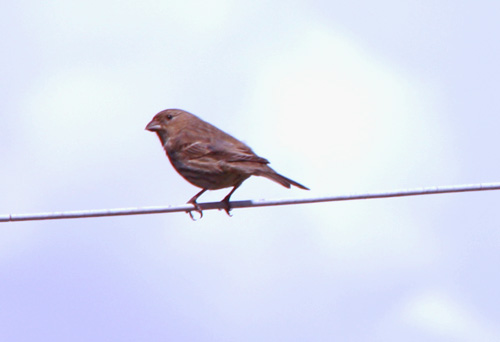 Ah, the signs of Spring… It’s been really good weather this whole week. I saw a small bird (about the size of a Nendoroid) about 50 feet away, just on a wire, so I decided to take a picture of it. While my lens isn’t telephoto, I’d have to say that this isn’t bad. It’s definitely more detail than what the naked eye can see. 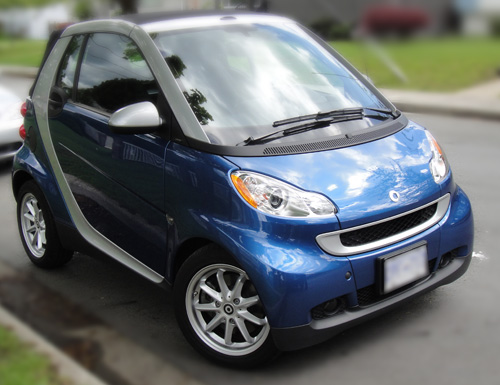 I also had the luxury of driving a Smart Car during these warm beautiful days. The roof is almost completely retractable, giving some great time to be had while whizzing around town. My car was out for service, so this is a courtesy vehicle. It was a fun drive. And such a SMALL car! Oh wait… a figure photoshop idea is forming! 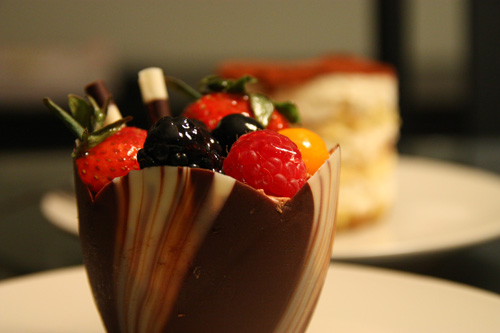 An absolutely delicious dessert we had, a few weeks back (same week I went to Book Off). Also Tiramisu in the back too. Also delicious. You can bet your nendoroids they would have wanted some! 🙂 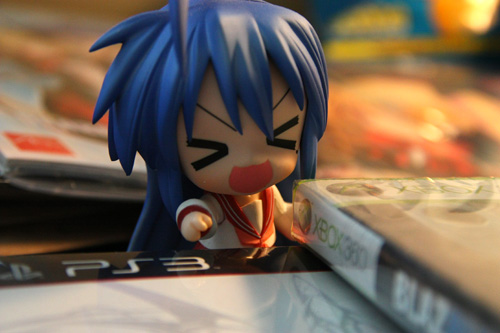 Recently, I got a pile of swag from a very good friend in the UK. As you can see, Konata is swimming in it as is overjoyed. I’m sure most of you will know exactly what this is, just from the photograph, but it will have to wait until later for me to show you the extent of the loot.

See you all again real soon!

I create stuff in my mind, and try to barf it out onto tangible mediums such as Photoshop, and video game art. Sometimes, I get paid to do it because I'm a freelance artist working in the video games industry. Getting paid to do what I love (video games, and art) is my dream come true!
Broken Pegs and How to Fix Them – The Rise of Rize
Looks like I’m overloaded!