Nostalgia, and my iPhone game 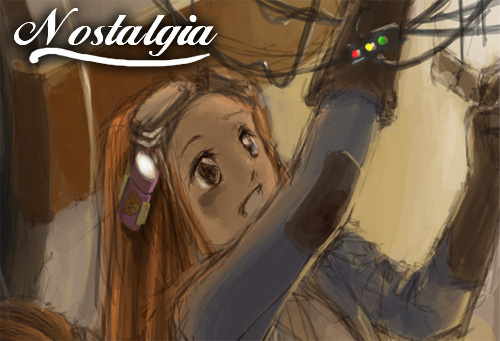 I worked with Red Entertainment. There, I said it. I’m proud to have done so, even though it wasn’t for a long time.

I recently started playing a DS game called Nostalgia. The reason I decided to do a post on it is because I have had personally brush on the development two and a half years earlier, at least I am assuming so. An interesting assumption for sure. 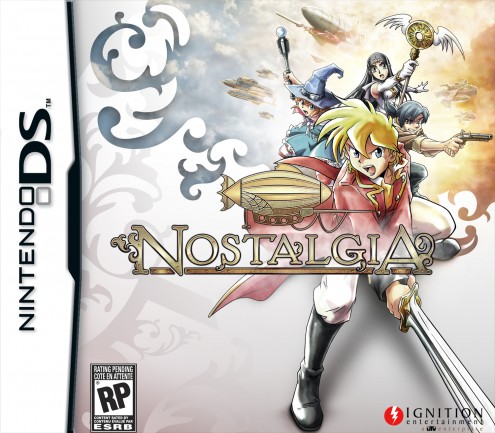 To start, Nostalgia was a game originally dreamed up by the good people at Red Entertainment.  It was developed by Matrix, and published by Tecmo. In North America, it was published by Ignition.

The key here is that it was originally thought up by Red Entertainment. Now, some of you figure collectors may remember the Shuraki series. Basically, no actual anime series or anything. Just an IP (Intellectual Property) of characters made into figures. Hugely successful.

Red Entertainment were also the ones that brought Sakura Taisen. Also a hugely popular IP. Red Entertainment is a company that creates original IPs, and takes these ideas to collaborate with various publishers to turn those ideas into a marketable, sell-able product. 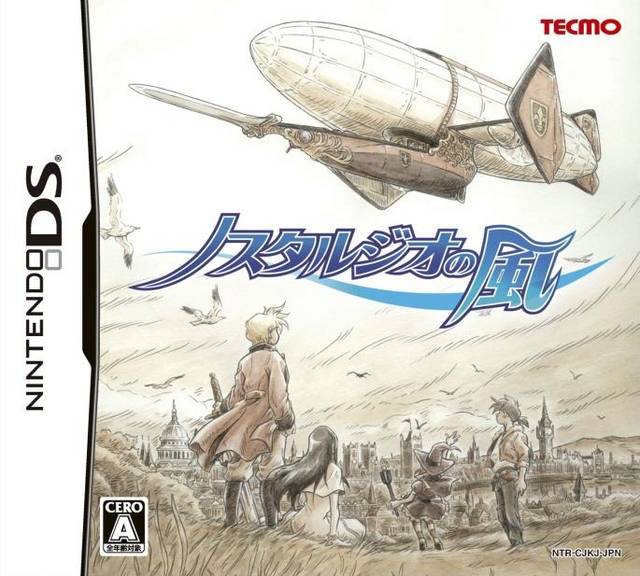 That’s why their games are published and sometimes developed by Sega, or in Nostalgia’s case, Tecmo and developed by Matrix (they also developed the FF series for DS).

A little education on video game development processes for you – there are essentially two major players in game development: the developer and the publisher. The developer is sort of like the author of the book. They are the ones that create the game, from design, to programming to music to art, the whole thing. The publisher, like in book printing, is the one that foots the bill – pays for the development costs, advertising muscle, and of course, printing the game. It starts to get a little confusing for most people when the developer is also the publisher, for example, SquareEnix develops and publishes their own games, as well as Nintendo. In the example of JP version of Nostalgia, Matrix is the developer, and Tecmo is the publisher. So where does Red Entertainment fit into this?

Red Entertainment is an IP company. Having a game business strictly as an IP studio is rare. Basically, the IP company comes up with the idea, and then they go out and look for a developer who they think would be best to solidify that idea. They seek a publisher that they think would be most suitable to market and publish the game. Sometimes that can be based on financial factors, sometimes on target audience and other variables.

Nostalgia’s settings takes place in Europe, where Airships are the main form of transportation, magic is possible, and monsters and sky pirates terrorize the skies.

Red Entertainment also came up with Valkyria Chronicles. Now, I think at this point, you may realize a pattern/similarity between these games – they’re all steam-punk, alternate-reality Europe settings.

I was fortunate enough to had gotten a chance to work with Red Entertainment. (you can imagine how ecstatic I was, being a huge fan of their works).

At the time, the project was still in design refinement phase. My team’s task was to come up with a unique art style, and an intriguingly unique game design, roughly based on some of what Red had already established.

Now, for the sake of confidentiality, I won’t talk about the processes involved, or what the initial designs were and what sort of mechanics we put in. I won’t even refer to the purposes of the artwork that I’ve shown. Instead, I’ll simply touch on the similarities by bringing up the basis of Nostalgia, (since really, those are already public) 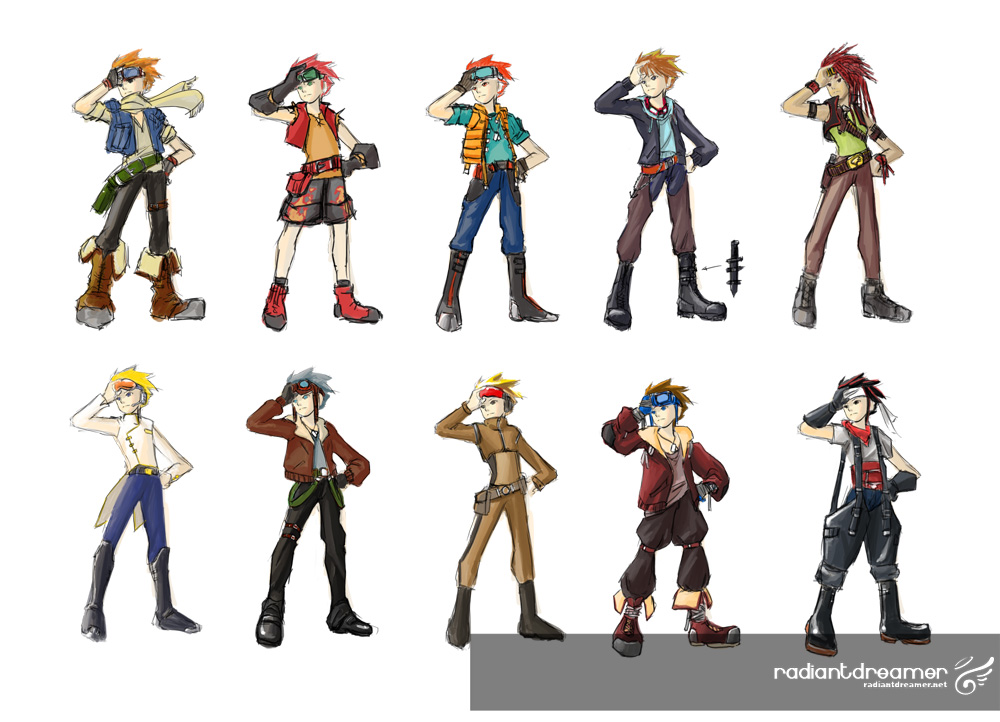 The very first thing I noticed that was similar when playing Nostalgia , is the initial story setup of the main character. His father is a famous adventurer or hunter of some sort. An unfortunate accident happens and his father is lost. The son, a brash, inexperienced and enthusiastic youth, decides to search for his father, meanwhile trying to fill his father’s big shoes.

The only clue his father left behind was his airship. The world of Nostalgia takes place in an alternate-reality of steam-punk technology, with the main form of transportation being airships. I thought this was cool. The setting was a little different in that Nostalgia actually takes place on Earth.

Other similarities I noticed that made it through the design process into Nostalgia was how weather affected combat in various ways (such as lowering accuracy), and upgrades that allow higher altitude. And of course, the potential love interest/female companion who’s gentle and nurturing, with some special status that makes her a key plot element. (it’s a bit typical JRPG, actually a bit Laputa).

Being the art lead on the project, I was responsible for coming up with a cohesive style that was slightly different from the initial works that were provided. You see, this project was dreamed up by Naoki Morita back in 1996, but was put aside with the success of Sakura Taisen. (this is probably why you see some similarities between Nostalgia, Sakura Taisen, and Valkyria Chronicles). When I got to work on the project, it was two and a half years ago.

Hearing that Red Entertainment was the one bringing this to the table, and knowing its history, I was incredibly excited. I basically bent over backwards to get myself as involved with the project as much as possible.

Some of the things I got to do were create concepts and guide the art style. Since I was the most versed in Japanese culture and entertainment at my studio, I was a good fit for this role.

The initial requested designs for the airships and whatnot harkened to the 1940’s type of designs, like biplanes, blimps, propeller based planes etc. not unlike those seen in Range Murata’s Last Exile, or Studio Ghibli’s Laputa. It looks like the style was carried over into Nostalgia, and refined quite nicely too. 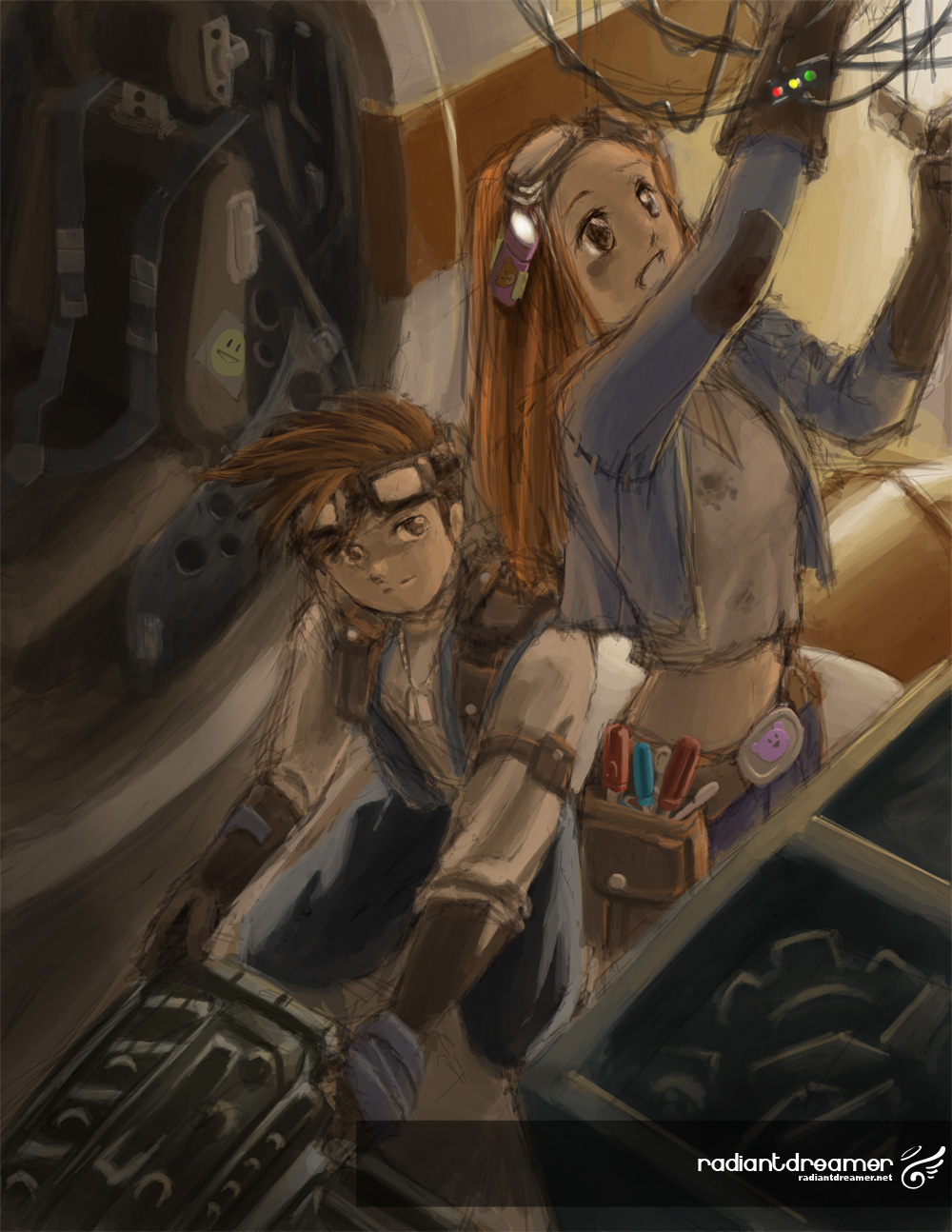 I’m only about 3 or 4 hours into Nostalgia at the moment, but the final gameplay outcome of Nostalgia compared to the initial designs are by and large, quite different. Nostalgia consists mostly of JRPG elements, while the title I worked on… well, didn’t.

Perhaps those features may appear in a sequel, or a completely other game. Who knows? All I can really say is that it was an incredibly fun experience having to had worked with Red Entertainment, even if it was only briefly.

In other news, Mice Heist broke top 50 in the Action category of the App Store! I’m pretty happy and excited about that! However, this isn’t quite enough to have staying power. Please do support me and help me pay my mortgage!

Do check it out. There’s more information on the game at this link:

Apologies for the late blog post (I missed Friday) but things have come up that forced me to push to Wednesday instead. That’s okay though, since I used to post on Wednesdays.

I’m opening myself up to business again for freelance work. So if you or anyone you know needs work done, anywhere from illustrations to business cards, let me know. I have to pay for my mortgage. 😀

Ningyo and Ninjovee mentioned previously that there’s been a lot of intense drilling going on at radiantdreamer. Well, it’s not over yet. I do have one more article related to that, but I have that planned for a future post. It’s one that’s very applicable to figure collectors, and will benefit for sure!

I create stuff in my mind, and try to barf it out onto tangible mediums such as Photoshop, and video game art. Sometimes, I get paid to do it because I'm a freelance artist working in the video games industry. Getting paid to do what I love (video games, and art) is my dream come true!
Ugh… life.
Celica Mizushiro + Custom Base Tutorial