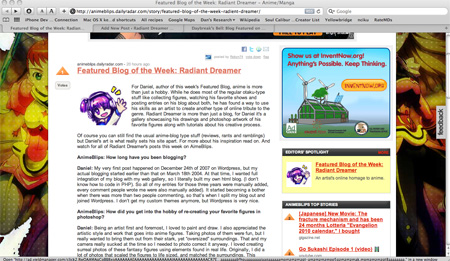 I never thought it would be possible, but Radiant Dreamer is now featured on Anime Blips!

It was definitely an interesting experience. The interview questions asked were similar to what has been asked of other featured blogs, but Robyn tailored it more geared towards my specialty in photoshop. 🙂

Robyn was a very pleasant person to work with, and informed me that I was ranked at around 100 out of their 600 tracked sites, which was pretty surprising for me, and very flattering.

It was an honor to be featured on Anime Blips, and also for having the opportunity to be interviewed by Robyn. If you don’t really know about Anime Blips, they’re a feature site similar to an anime version of Digg, with the ability for users to vote up and vote down interesting topics. This makes it very easy and relevant to anime news readers who want to catch the best quality topics voted by other anime fans of similar interest. Do go check it out, and do vote for me too!

The biggest thanks I have to give is only to my readers. You guys are more than just “readers” to me. Being able to connect with you guys through your comments is very important to me. It lets me know what you guys like to see, and your support helps keep me going on a very difficult and niche subject of anime photoshop/compositing. I know that the ones that take the time and effort to comment are my good friends, and I appreciate the feedback.

On another note, I have survived my first day at AFA 09 (thanks for getting me the tickets, Zh3us!), having just landed, and having caught a cold from my wife. I’m still incredibly jetlagged (It’s 6:43am in Vancouver, which means I haven’t slept all night). Hopefully AFA has helped me with adjusting to the time zone difference, and I’ll be back to normal by tomorrow. 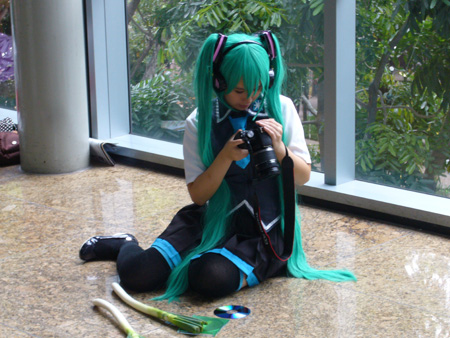 I’ve taken over 100 photos at the event, so stay tuned as I sort through the best ones, and make a post about it. With how tired I am, I probably won’t be attending the second day, even though I’ve already paid for it. We’ll see how it goes.

I create stuff in my mind, and try to barf it out onto tangible mediums such as Photoshop, and video game art. Sometimes, I get paid to do it because I'm a freelance artist working in the video games industry. Getting paid to do what I love (video games, and art) is my dream come true!
Anime Festival Asia ’09- My Turn to AFA
Saber Lily Omake!