It’s been a while since I got back into doing figure photography. I managed to nab Alvis Hamilton from Last Exile fame off of an etailer for a very good price of $25. Before she arrived, I had already planned a photoshoot of her in rainy weather. I just couldn’t resist those cute little gumm boots.

Usually, spring in Vancouver doesn’t yield much rain, so I waited in anticipation for the first signs of rain. My wish was granted only but a day after Alvis arrived, and I had coincidentally brought in my camera specifically for a different figure shoot I had in mind.

I really wanted to capture the dreary rainy weather that is most common in Vancouver. We were 1 day short of beating our record of 100 straight days of rain during one summer. Unfortunately, it’s actually pretty difficult to capture rain on a camera. I was drenched, but the only proof of that is the small drizzle you see rippling in the water, and part of some on Alvis. Instead, I had to resort to using photoshop to tweak the color and mood to show the desolate dreariness I wanted to portray for poor Alvis wandering the streets aimlessly.

After arriving back at the office, I told Shino that I had completed the shoot as I had said I would. He guessed that I went down to Granville Island, which never occurred to me. I immediately picked up my camera and went to it to Granville Island, imagining the perfect opportunity in such a high traffic tourist area. It was my first public photo shoot. Fortunately, because of the dreary weather, there wasn’t a lot of people around, if at all. I guess I can say I sort of blended in, like a tourist or something. Until I took Alvis out of my pocket, that is.

One of my favorite photos was actually at a shipyard on Granville Island. It very much suited the mood and the feel that Alvis portrays. I even saw a ship that had elements of Range Murata’s designs. Almost like a WWII machine. Unfortunately, there was some serious activity that would be considered dangerous for me if I were to setup in that surrounding area. If you look carefully, you can kind of see it in the background behind the boat on the left.

For good measure, I decided to change up the mood, brighten the photo, and make it more of a sunset feel. 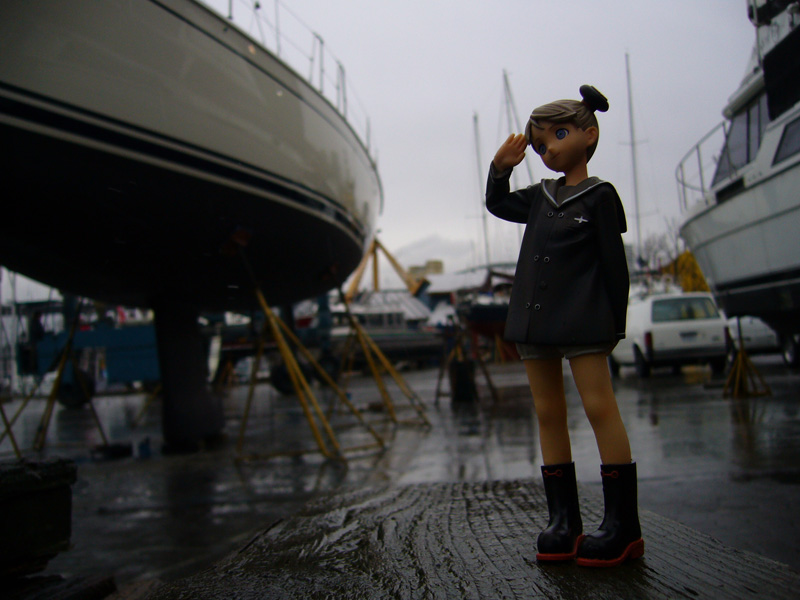 Hope you enjoyed my little photoshoot!