So on Wednesday, as I had mentioned from my previous post, Clalaclan arrived. I was in the middle of some Sakura Wars V when the doorbell suddenly rang, and the familiar face of my mail lady smiled at me.

“Hello!” she said in her usual bright and cheery tone. She seriously sounds like the merchant girl in Resonance of Fate.

I often wonder if she wonders what’s in those packages. She delivers mail every day to people, with various shapes and sizes of boxes, some marked fragile, others simply marked “amazon.ca”. I know that if I was a mail person, I’d be more than curious. I mean, every time I see an unopened box, I think “ooh! presents!” whatever the contents are, it must be good, because it’s good enough to buy online and have it shipped. That kind of extra money and wait time has got to be worth it, right? 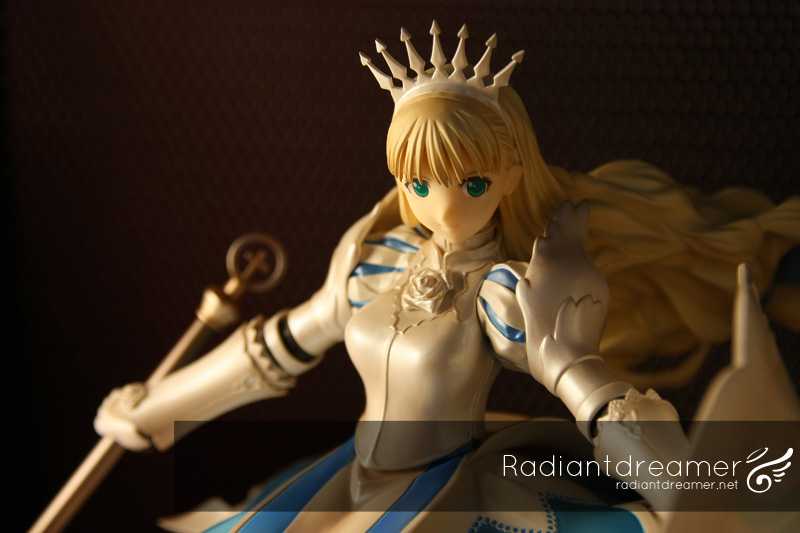 To put it simply, Clalaclan is absolutely beautiful. Stunningly so. She demands a sort of presence unlike any of my other 1:8 scale figures. Her pose is similar to Saber Lily, but straighter and more confident. This woman means business. 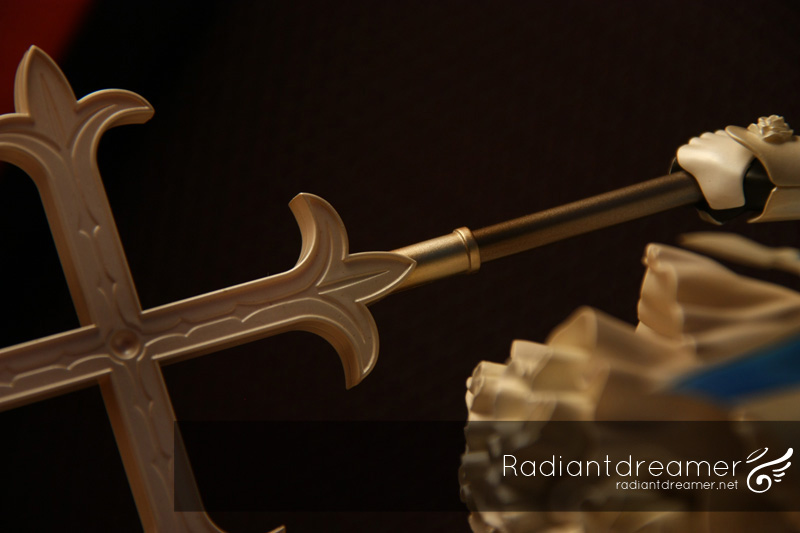 And while the details are very clean, it’s also very detailed. The lines are crisp, and the shapes are clear. I really love this cross. It’s just so cool! 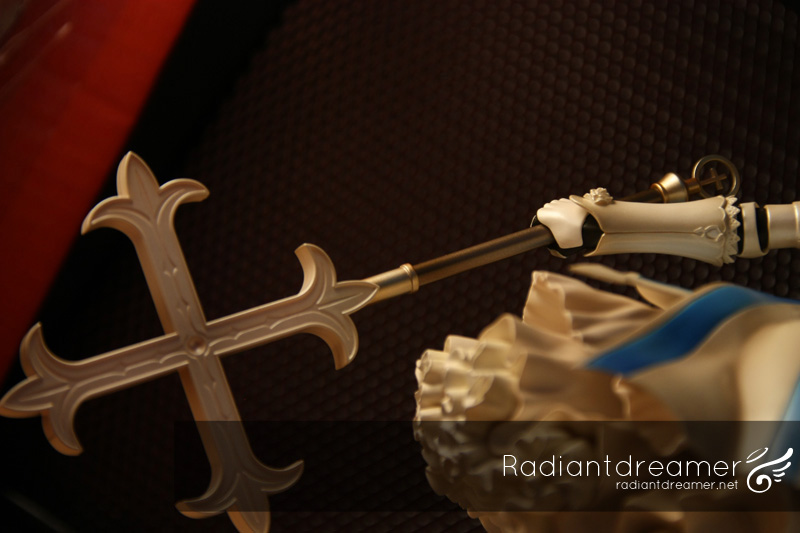 When I first saw Clalaclan, it was actually the Kotobukiya version. Another absolutely amazing looking figure. Unfortunately, I had let that one pass, and had since regretted it, as it became incredibly difficult to find at the right price. A black version came out, but it didn’t look nearly as beautiful and princessy as the original release. You’d think that Kotobukiya figures would be in abundance! Needless to say, when I saw preorders open for this Alter version, I jumped on it faster than a leg-humping chihuahua in heat. 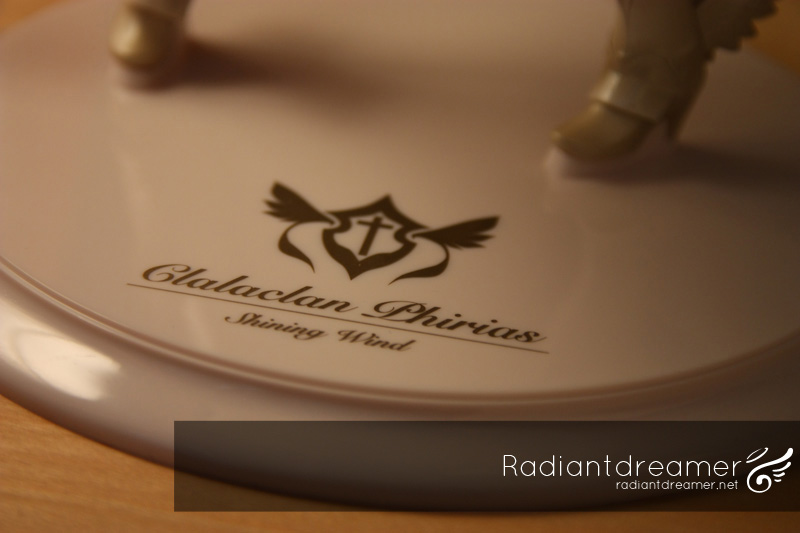 A beautiful decorated base holds up Clalaclan, Engrish and all. I hate it when that happens. LadiantDleama does not apploove! Speaking of “holding up Clalaclan”, this figure is by far the heaviest 1:8 scale figure I own! Even heavier than BRS? Yes. Even heavier than Saber Lily? She’s 1:7, not 1:8, but also yes.

Typical Alter figures are incredibly light. They use a PVC blend that’s quite hard, and not nearly as dense. This helps with preventing balancing problems among figures. The physics behind it has to do with balancing  ratio of weight of a figure against the structural integrity of it. There’s a sort of “tipping point” where the figure becomes too heavy to carry its own weight and leans. If you make it too dense, the figure is heavy, and leans. If you don’t make it dense enough, it bends too easily and starts to lean. 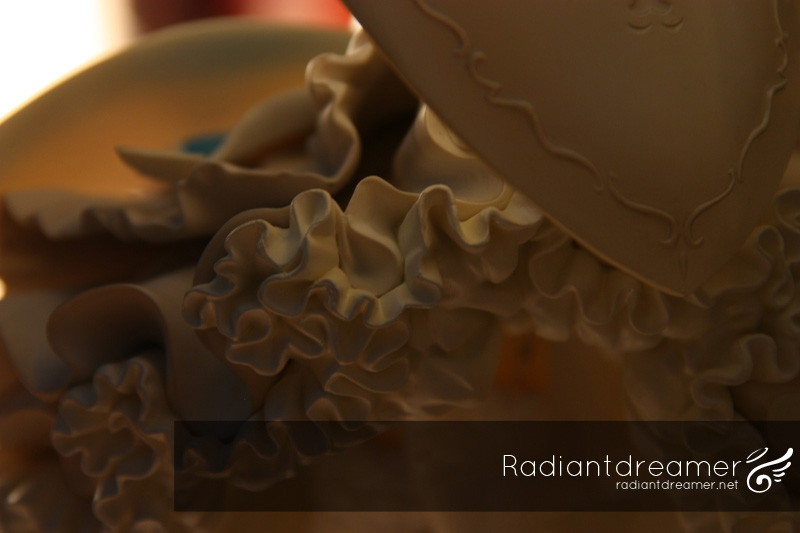 Which brings me to the point that the heaviest part of Clalaclan is her frilly dress. It looks a lot like whipped cream, doesn’t it? Surprisingly, and I don’t know why Alter chose to do this, but the dress part is unexpectedly dense. Not only is it very dense, it’s also somewhat pliable. You can kind of squish it between your fingers. It’s very similar in feeling to that of a gashapon, or those cheap old Smurf figures. The rubberyness of it has to do with the softening agents they use on the plastic. But why make it soft? I’m guessing that the frills are so complex to deal with in the mold that if it wasn’t this soft, it would be hard to pull out of the casting. But by making it soft, it also has to be very dense. More information about plastics can be found on my increasingly popular plastics article. 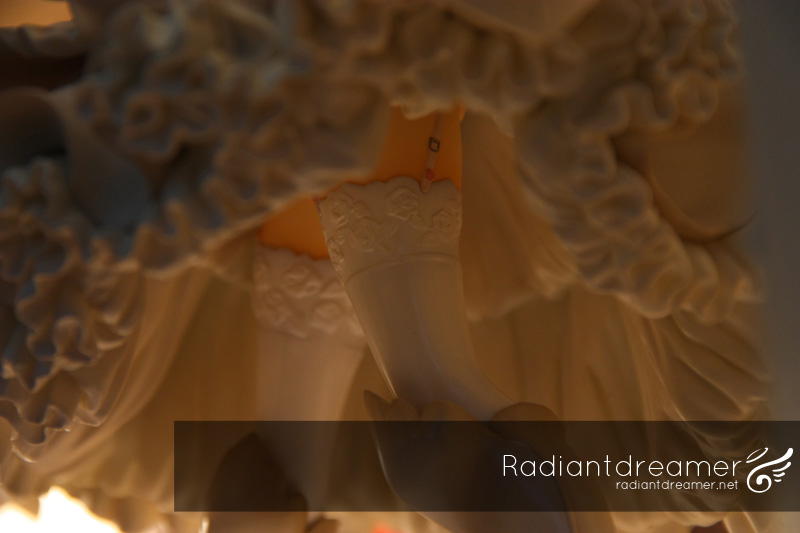 Underneath her dress is also very beautiful. I’m quite happy that I captured this radiosity lighting here. It really brings a sense of realism to the frilly petticoat underneath. Surprisingly, no matter what angle you try to peer, you can’t see her panties. Now that’s decency. You literally have to remove her from the base in order to see. I respect that kind of woman. 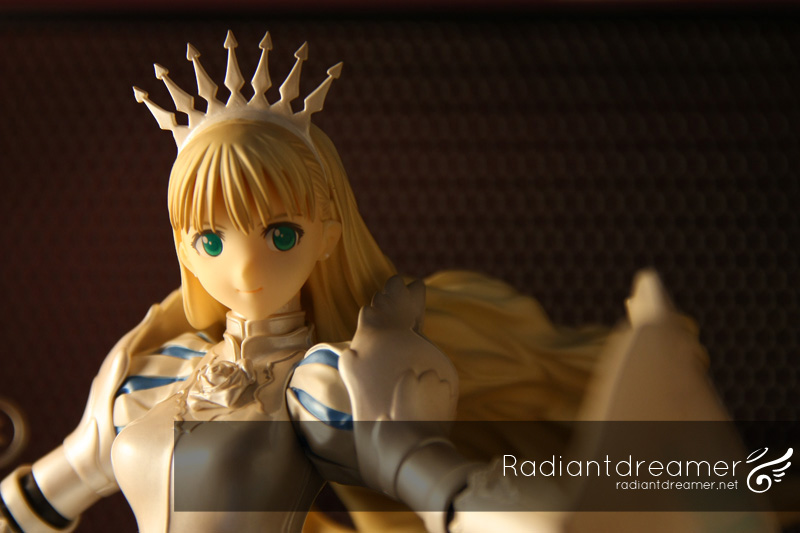 Tony’s style is captured accurately in this figure. Everybody loves Tony’s work, and so do I. But I can’t help but think that his expressions are pretty bland. They all tend to have that semi-blank look on their faces, and it’s even more apparent in the figures. Still, accurately capturing the essence of the style is the whole point here, and Alter accomplishes this in spades. 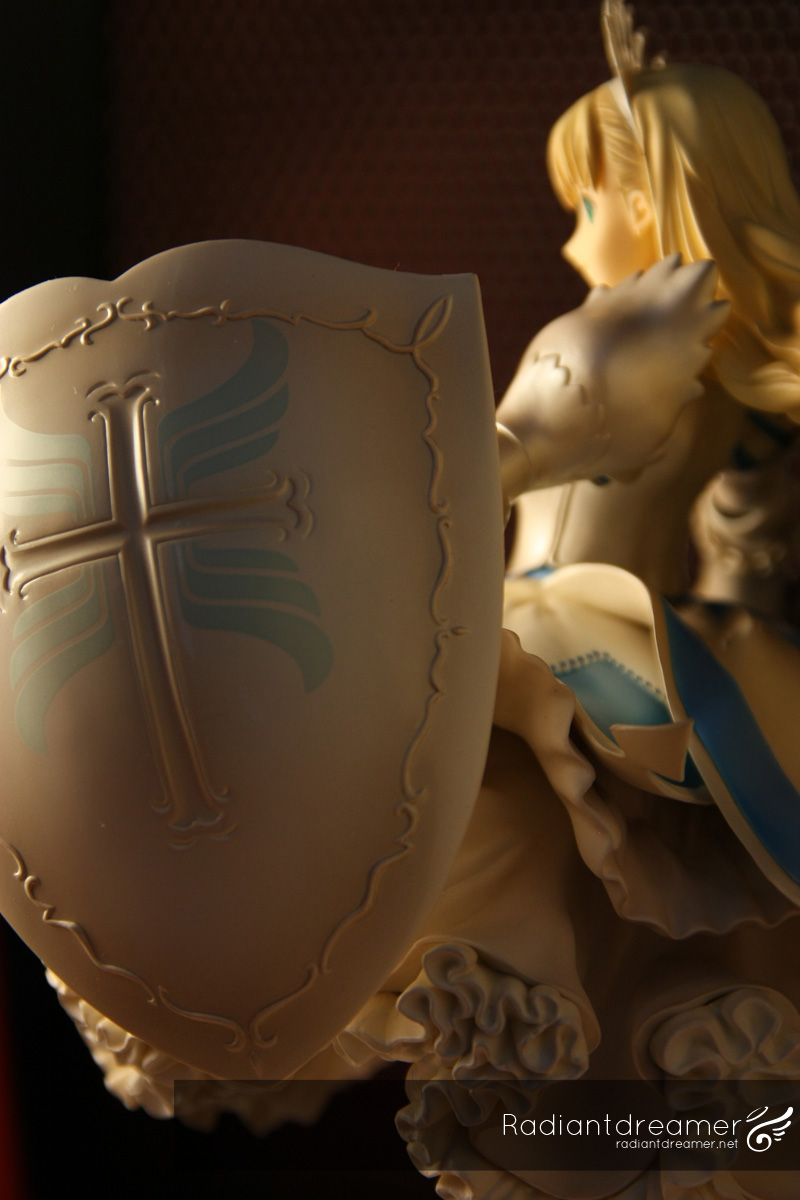 The legendary and glorious shield she carries is also stunningly detailed. It looks about the same as the Kotobukiya version of the shield, I think. But my point is that it’s a big shield, she’s carrying it gracefully, and it’s pearly white. I’d like to see you carry a shield like that as gracefully as she can. 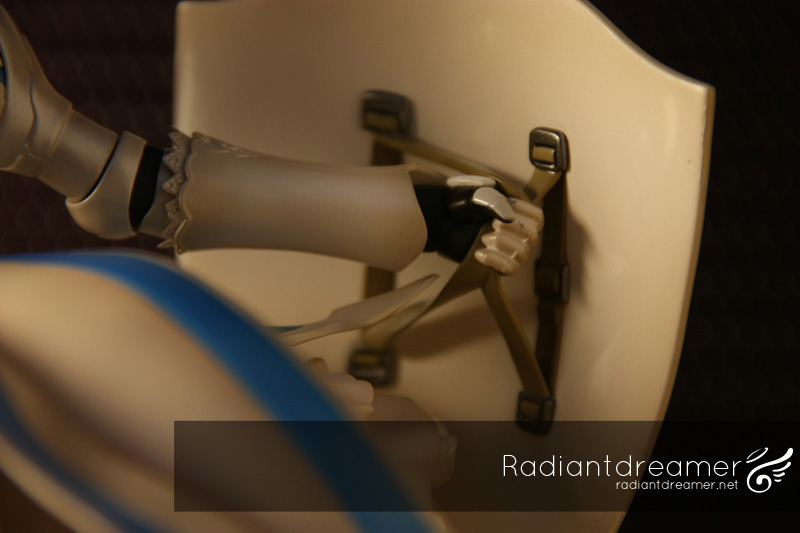 Great attention to detail on the shield handle. It looks like it’s actually clamped onto the shield when in reality, it’s just a couple pieces of plastic held together by glue. The hand is actually attached to the shield. She comes with a spare free hand so she can go shieldless. As Tier mentioned before, this is an odd move by Alter. They normally don’t provide options for their figures.

At first, I thought “Why provide this option at all? Why would I want to display her without her shield?” the answer donned on me when I placed Clalaclan on the top shelf next to Saber Lily. At the front position, the shield literally blocks her entire body and face. All you can see is a giant frilly dress with a giant ornate shield floating in front of it. Oh and a pile of hair sticking out of the back of the shield. 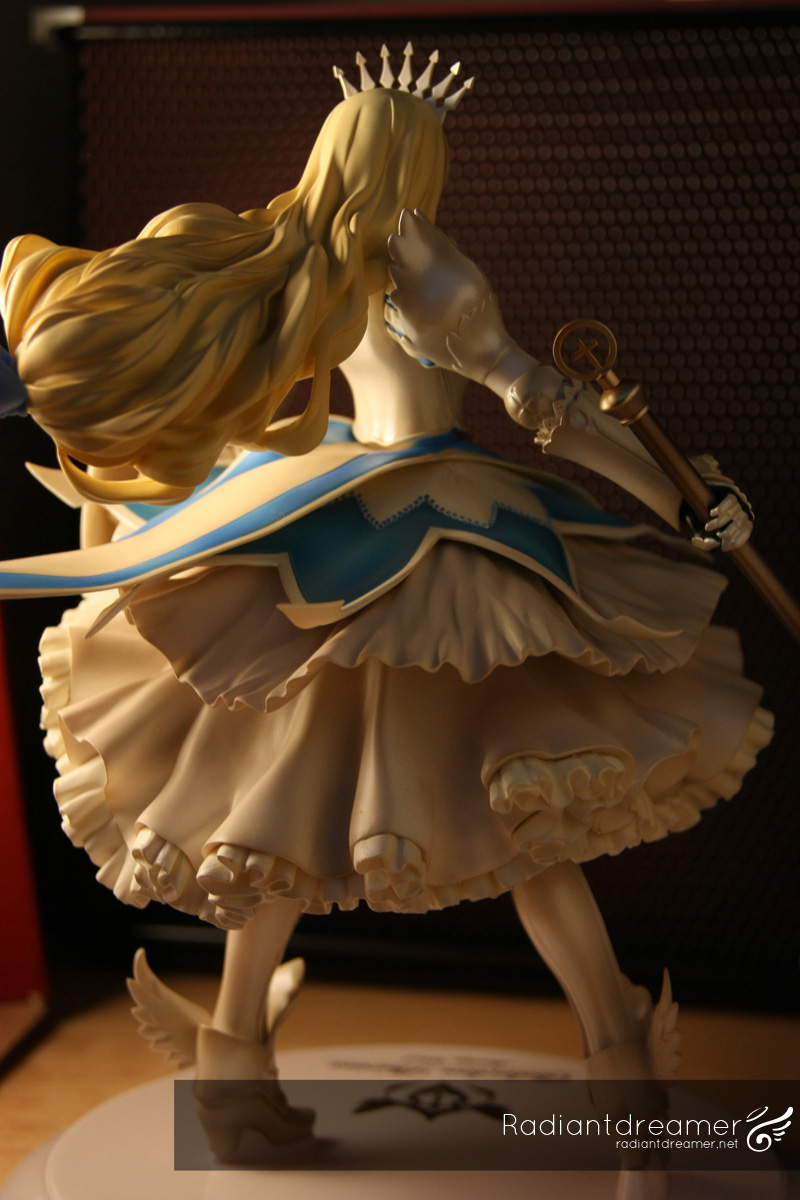 The back view. Unlike Saber Lily who only looks good at one single angle, Clalaclan looks good from all angles. There is detail and beauty to be seen everywhere. I’m seriously thinking about getting one of those rotating pedestals for her. But then again, the pedestal would probably break from Clalaclan’s weight. (I kid you not when I say she’s DAMN heavy!)

I’m especially wooed by her hair. It looks so dynamic and mesmerizing. I can’t really say much else about it other than it’s beautiful. You should enjoy it too.

The top of the dress (the blue thing with white accents) is made out of a hard PVC. It’s not very dense, so it’s kind of fragile feeling. By the feel of it, you could snap it off if you’re not careful. It’s almost like a thin ABS plastic. 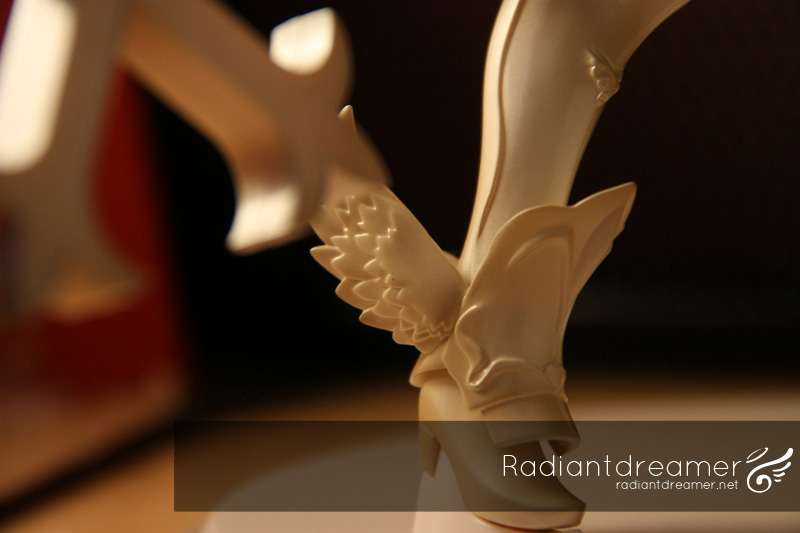 Winged boots. Hell yeah. The winged part is attached to that front plate piece and goes around to the back. Strangely, this whole piece is loose. Same with the other leg. I don’t understand why it isn’t simply attached. It too is also made of the same rubbery soft PVC that the dress petticoat is made out of. I really don’t quite understand what Alter is thinking with their choice of material with this one. At first, i thought “oh, if it’s soft, then the wings won’t break as easily” which is true, but that doesn’t explain why the top of her dress then is made out of hard, brittle plastic. 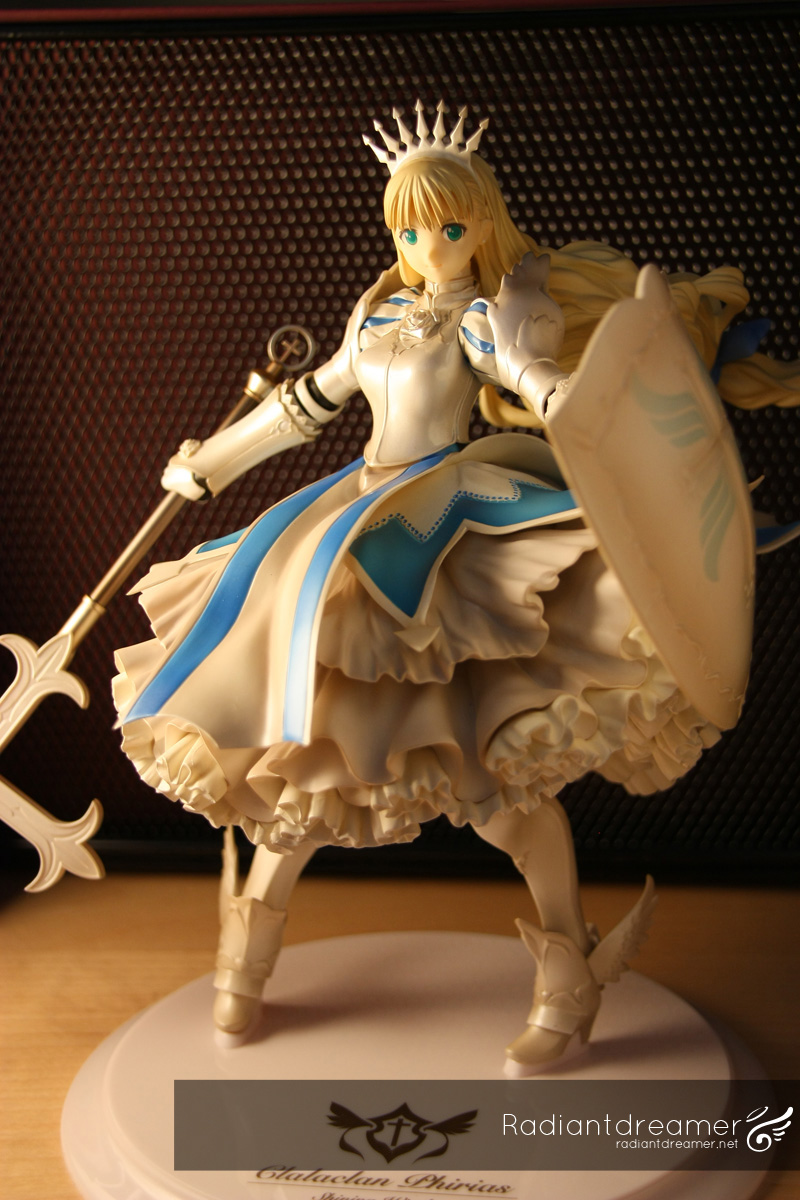 While the choices in plastic seemed a little strange to me for the durability and structural integrity of this figure, it is truly a masterpiece to behold. The density of it makes it seem like it’s worth a lot more than what it’s priced at (but after EMS shipping for such a heavy item, you’d be hard pressed to say that it wasn’t expensive).

Will she lean, I’m a little bit worried that she will. But then again, I’ve seen figures with much harder and denser integrity lean. (Max Factory Ignis) so it’s a bit hard to say. 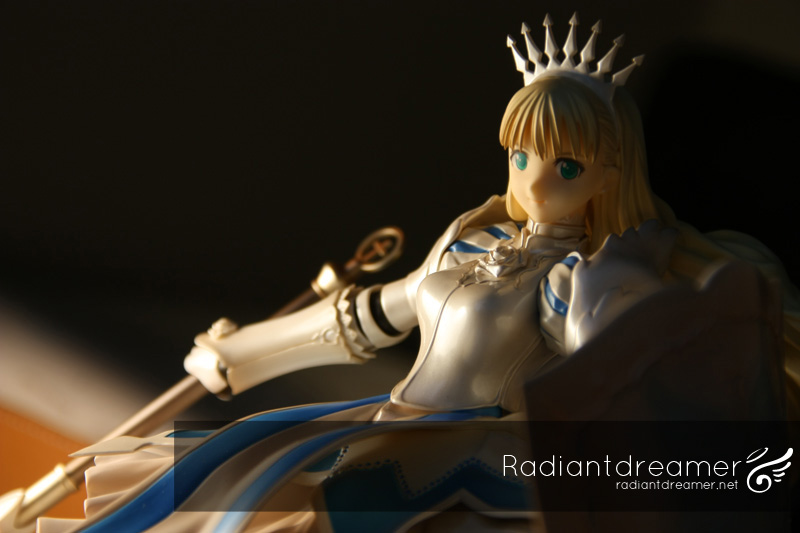 Would I recommend you buy her if you see her available? Hell yeah. I guess that’s what it all comes down to, right? 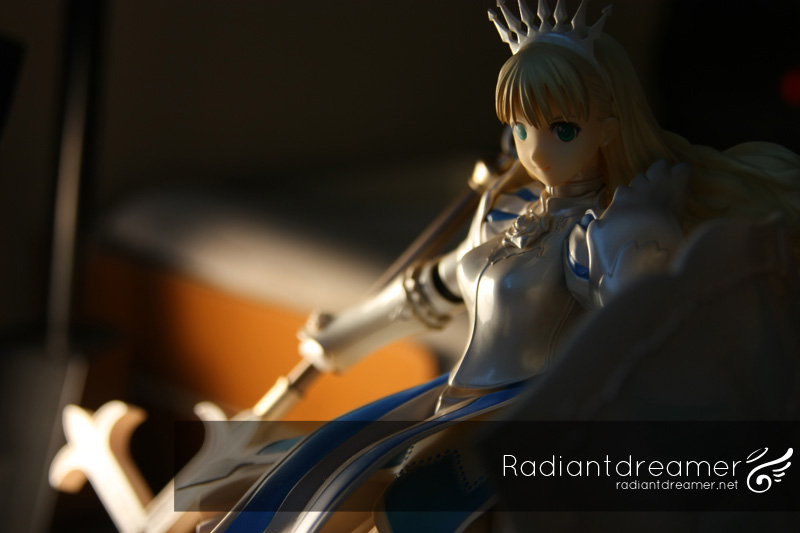 The original photo I used for the photoshop piece. Which by the way: 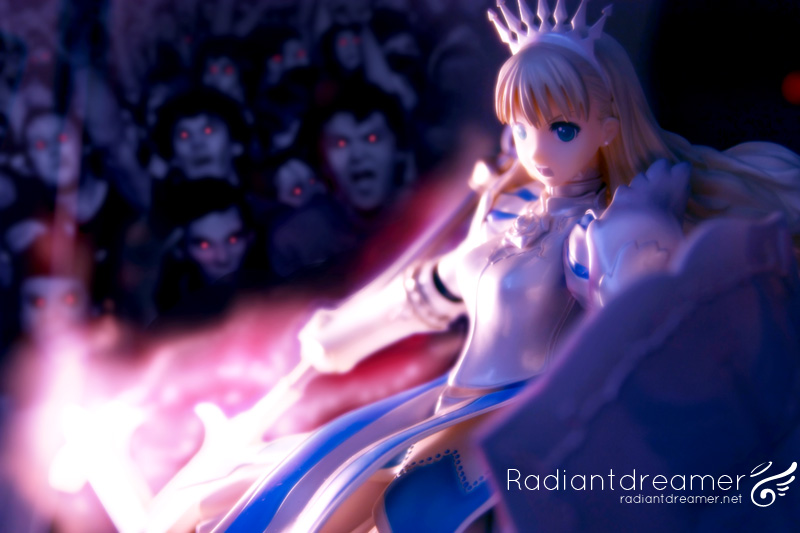 The wallpaper for this can be found in the Wallpaper Gallery. Cheers!

I create stuff in my mind, and try to barf it out onto tangible mediums such as Photoshop, and video game art. Sometimes, I get paid to do it because I'm a freelance artist working in the video games industry. Getting paid to do what I love (video games, and art) is my dream come true!
Bakemonogatari & animeshumi Contest Results Are In!
Radiant Struggles to Learn