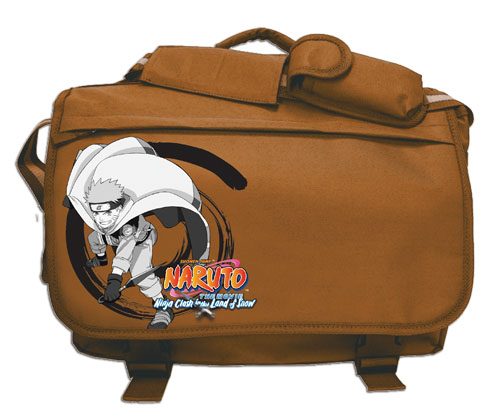 EDIT: due to the definition of what Otaku really is, this topic more describes being an “anime fan” than a true otaku. Take what you will from it and be proud to express your fandom!

Sometimes, one may feel the need to express their interests and hobbies proudly. They might decide to wear a shirt of their favorite anime, or carry a keychain of their favorite character, or use a wallet emblazoned with the logo of their favorite show. But the truth is, most non-otaku people will look at you funny. They don’t share the same interests as you, and don’t understand your fandom is not of nerdiness, but of a form of expression. Much like how a sports fan wears a sports jersey of their favorite team. The difference though, is that sports is widely accepted. So let’s look into what you can do to still be a fan, but not look like a dork.

In most otaku’s current situation, they have one of two options :

2. find some way to prove you’re a fan, but look fashionable doing it.

Option 1 is a very common option. On the surface, most seem to not care. But with it, they also typically abandon other important aspects of the physical image, including grooming, and social interaction. They congregate with other fellow otaku, typically in a comic shop, carry an oversized backpack or messenger bag containing otaku things such as comics, hand-held game systems, and stuff that I have no idea what makes that bag so stuffed. They also speak in a very specific “nerdy” manner, if you get my drift. These people typically don’t have lives outside of their otakuism, and typically either don’t have girlfriends, or their girlfriends are also in the same line of interest as they are. I know it sounds very stereotyped, but the unfortunate thing is that it’s true.

Most people in option 1 wish that they were in option 2 though. Whether they care or not, they are being shunned by the rest of society, and that hurts and sucks. People in minority groups of various cultures, sexual orientations, or race, would understand what I am referring to.

So how do you prove you’re a fan, without looking like a complete dork? The basis first is to admit to yourself that you need to clean up your physical appearance. Though I am making specific reference to men here, women apply as well.

1. Groom yourself. If you don’t cut your hair, clean up your face, and care more about your physical appearance, it doesn’t matter if you’re wearing Georgio Armani. You’ll look unpresentable. Read some men’s fashion magazines and health magazines for tips on grooming. Ask a hair stylist to cut your hair and give you tips.

2. Dress better. Before starting on you start sporting your otaku goods, you have to first look like you fit in. Read men’s fashion magazines. Look at mannequins in shopping malls. Go into places like Mexx or Club Monaco, or Armani Exchange. Even if you’re not going to buy clothes there, try them on anyway, just to see how you look. Watch “What Not To Wear”. Get tips for friends who seem to dress better than you.

3. Speak with confidence. This one requires some practice. You may think you speak pretty alright. But try this. Record your own voice. Then play it back and listen to it. Try comparing it to a stand-up comedian. Doesn’t really matter who, just someone who can make an audience laugh. Pick out the differences in speech patterns. You’ll know what’s wrong at that point. Make an effort to correct yourself.

After these steps, you’ll probably find that you’ve sort of stepped out of the otaku label, and are just like “everybody else”. That’s not where you want to be. Time to express your individuality as an otaku.

Firstly, look at this messenger bag : 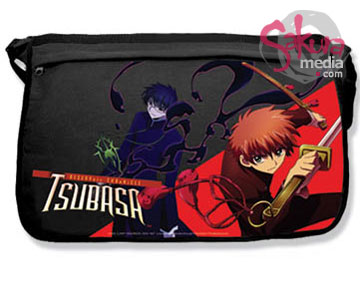 It’s a nice bag for people who are fans of Tsubasa Chronicles. But the problem with it, is that there’s a lot happening in this bag. Giant gawdy text, this big anime character on one side, and bright anime cartoon colors. Cartoons are typically associated with children, no matter how adult-rated the anime is. What you want to do is bring out something more sophisticated. Anime bag manufacturers see this. More of the recent bags are typically monotone, or match closer to the color of the bag. Unfortunately, that gawdy giant anime character still hangs around on the side. Even more unfortunate is that sometimes, the logo isn’t exactly fashionable material. This is as close to a “cool” messenger bag as I could find. This messenger bag however, only matches with a specific style of dress (the more denim, or slightly rougher look – think Raine Maida from Our Lady Peace. 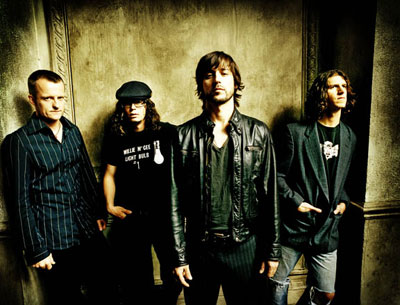 Here’s another messenger bag that’s got a little more style to it than your typical anime bag: The look of it is a little more designer and sporty. So it’s well suited for people that are on the go, but casually dressed. Ideally, this isn’t a bag that you would carry if you were wearing some designer clothing, or anything from Mexx. But it might work for carrying books for school, things like that. For those of you that don’t know, that’s Master Chief from Halo. The idea behind making otaku fashion more fashionable is displaying your otakuism proudly, but in a subtle way that easily matches with everything else. Subtlety is the key. By presenting your fandom in a subtle manner, common non-otaku people will see an interesting design, while otaku will understand your statement.

Let’s take another look at a “I thought it was a good idea” fashion boo-boo : 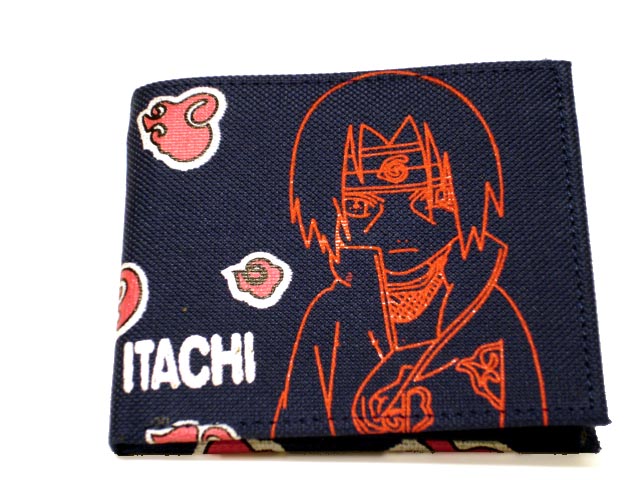 This Naruto wallet shares the same problem as the first messenger bag. It looks very immature, nerdy, and overpowering. You pull this wallet out of your pocket, and people will look. Not in a good way. Compared in contrast to this interesting Hellsing wallet: 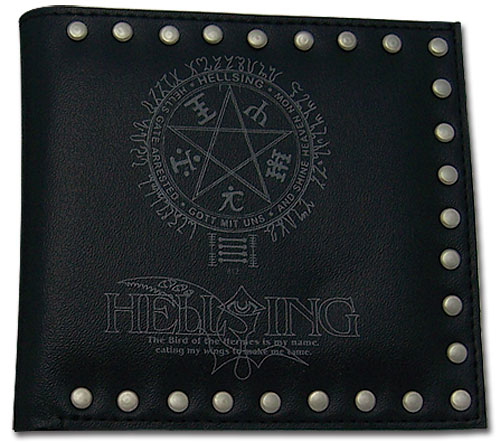 While it does have a sort of grunge look to it, you can tell that this is more in-line with fashion. The subtle logo on it is still easily recognizable by most anime fans, but is interesting enough that even the most non-otaku will think it’s cool. 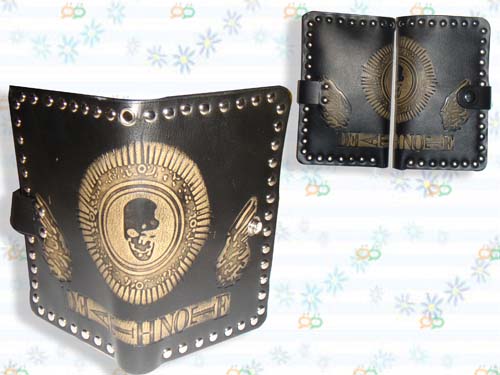 This one is a bit more intrusive in terms of the style, but it does sport a biker look of sorts. If you’re into that sort of style.

What about keychains? I’m sure some of you have some sort of anime keychain. Now I ask you, is carrying one of these around really a good idea? 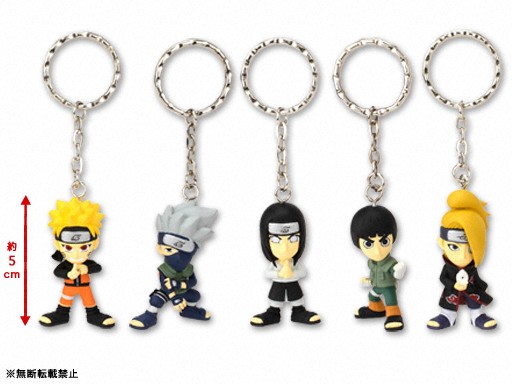 Some people like to carry these on their messenger bags, keys, cell phones, etc. This is honestly, not a good idea, especially if you’ve gone as far as to carry a nice looking messenger bag. I personally have failed this, as I had attached an SD Tifa (FFVII AC version) on my umbrella. Again, subtlety is the key. My own personal preference is an “L” keychain on my bag. 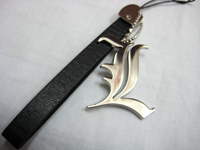 It’s subtle enough that not many people think of it as anything more than the letter to my last name. But I was asked once “Is that ‘L’ from Death Note?”. This is the type of response you want to elicit from people. If you’re carrying an otaku item that basically shouts out “It’s Naruto!” people, even fellow otaku, won’t ask “is that Naruto?”. Where as something subtle like this will get people asking, and will allow you to strike up a conversation. This is always a good thing. You want to make your otakuness cool.

Squaresoft does this extremely well with their Final Fantasy jewelry, creating subtle fashionability, while remaining practical and wearable. 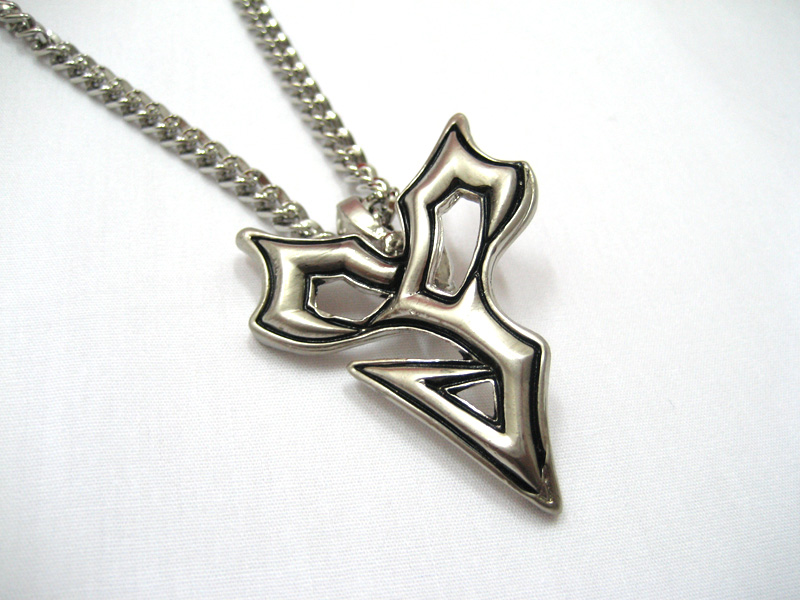 On another note, you can also customize your attire to include anime. Iron-on badges can look quite nice if done right, and the proper ones are selected. If you’re able to, who says it’s a fashion no-no to get Rinoa’s wings ironed on the back of a girl’s tank-top? Or maybe you’d like Naruto’s clan symbol on the back of your jacket? That’s cool too.

The one common thing that you may notice is that none of these designs have an actual anime character in it. You don’t need it. Character designs are smart – there has to be distinguishing features of a character that one would recognize right away – for example, Mickey Mouse is known for his gloves and his pants. People associate that lion keychain to Squall.

The only place that I can see where you can truly display otaku pride is on your cellphone. Your cellphone wallpaper can be some ultra cool anime wallpaper that screams who you are. Your ring-tone can be a subtle sound effect of your favorite anime or video game as well. But again, subtlety is the key. So you can forget Lucky Star or a Haruhi phrase. I currently have the Metal Gear Solid codec ring as my ring-tone, and Lumines “Shinin’ Combo” sound effect for when I get messages.

So go forth, and dress well. Wear your otakuness proudly. Put that Capsule Corps. badge on. Match your otaku-wear with your dress shirts. Wear that naruto leather wristband with your FFX necklace.

I create stuff in my mind, and try to barf it out onto tangible mediums such as Photoshop, and video game art. Sometimes, I get paid to do it because I'm a freelance artist working in the video games industry. Getting paid to do what I love (video games, and art) is my dream come true!
e2046 Elf Ranger
The Mirror’s Edge – now live