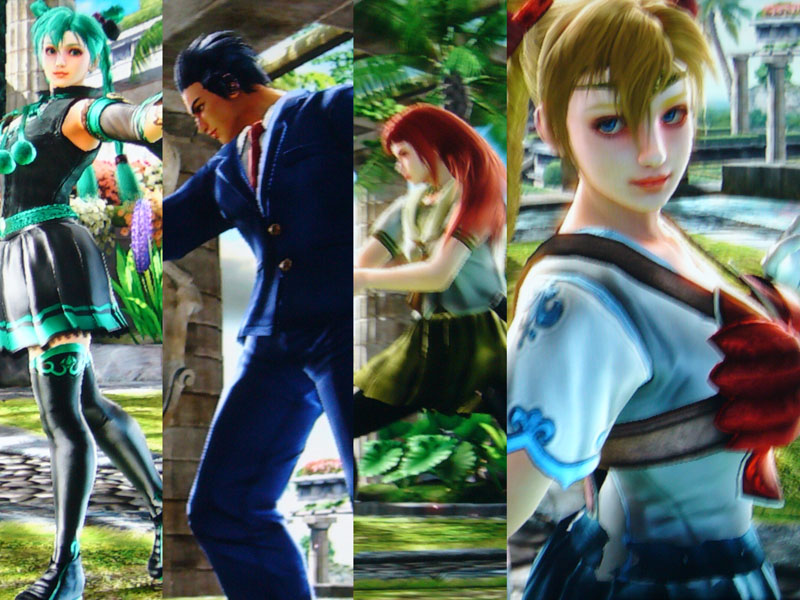 The Create a Soul feature of Soul Calibur IV is pretty fully featured this time around. They’ve added a lot of detail to it in order to make clothes fit better, have more colored parts, and overall good revamp of the color tinting system so things don’t go completely out of whack when tweaking colors. Several people on NeoGAF have already made some great recreations. I’ve posted my own recreations here, as well as a few of my favorites that I’ve seen on GAF, with minor modifications. Note that all details are color calibrated as accurately as possible, and with Japanese voices instead of English.

First up is of course my recreation of Miku Hatsune! 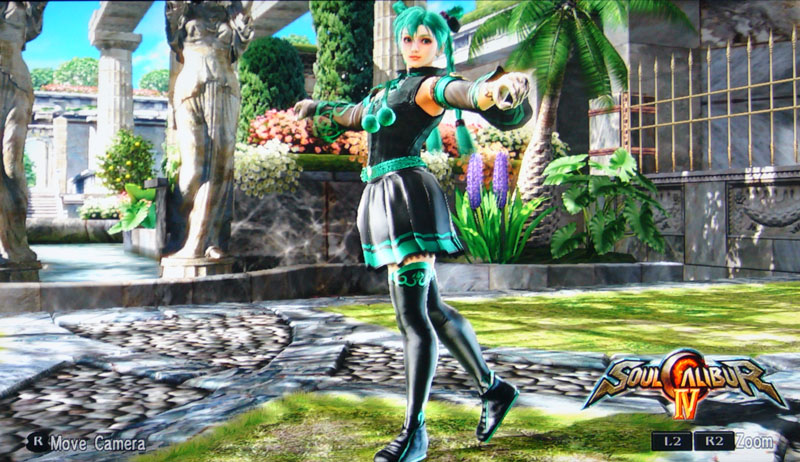 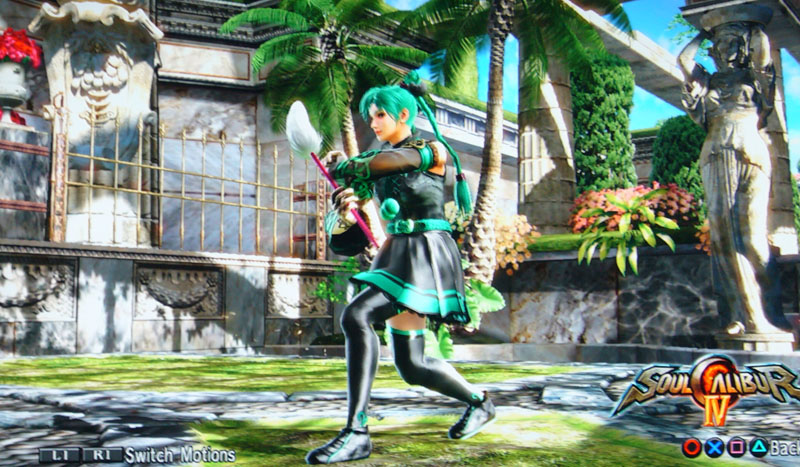 It’s unfortunate that Miku’s hair couldn’t be represented better. This is the closest you can get with that length of hair in pigtails. They do have a non-braided pigtails, but it’s quite short. They do have a necktie accessory as well, but unfortunately, it’s too small for it to look aesthetically pleasing, so these cute pom-pom balls were used instead. I’m waiting to see if I can unlock a longer vest to make it a nice gray one. Right now, the black seems to come together better. Playing as her though, you really do get a nice feel that she captures the essence of Miku.

Here are the details on how Miku was made.

Up next, we have Flame Haze Shana: 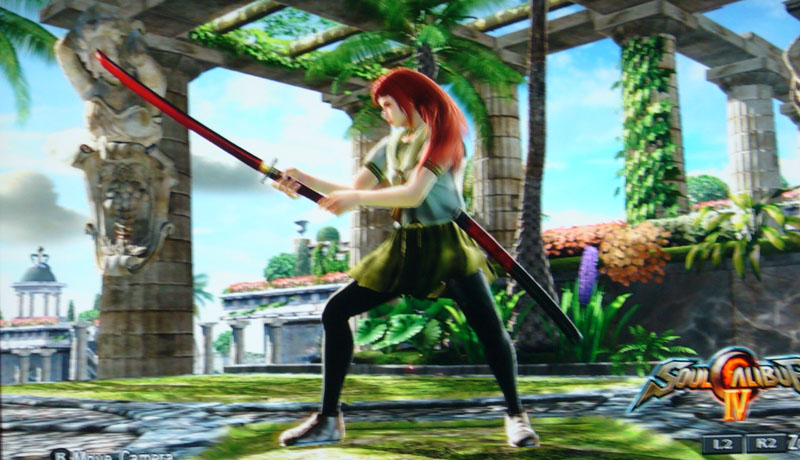 She was rather fun to create. I apologize for the terrible color in the photograph. The school uniform is actually only available to people that bought the Limited Edition version of SC4. Mitsurugi’s sword just seemed to fit perfectly in capturing what Shana is about.

Here are the details on how Shana was made.

Now, into the video game genre, we’ve got Kasumi from Dead or Alive: 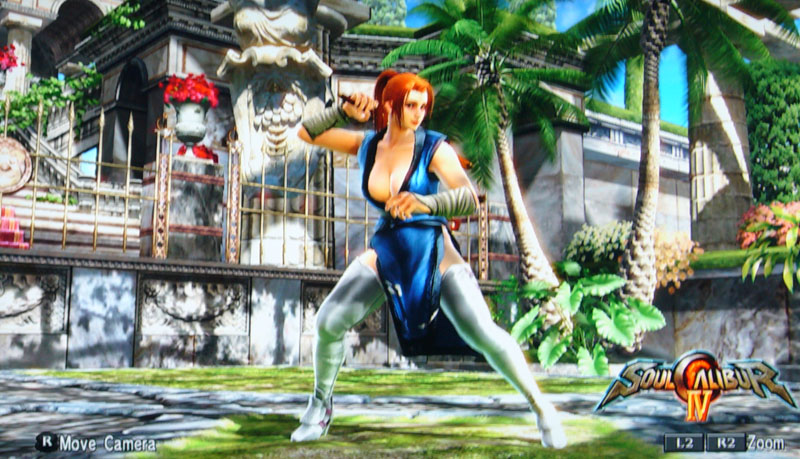 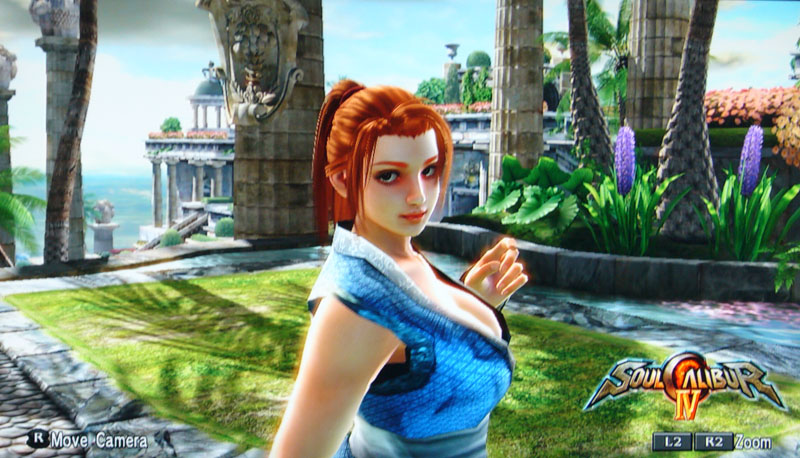 Creating Kasumi was actually not too bad. I tried to create her P2 costume, since there weren’t any pieces that had the poofy shoulder sleeves. But unfortunately, the tintable parts did not include the vest borders. That border could only be black. They have another sleeveless kimono vest, but the flaps are too short. At least the breast size is adjustable.

Here are the details on how Kasumi was made.

This person who swings a sword obviously needs to be in the game – Auron from FFX: 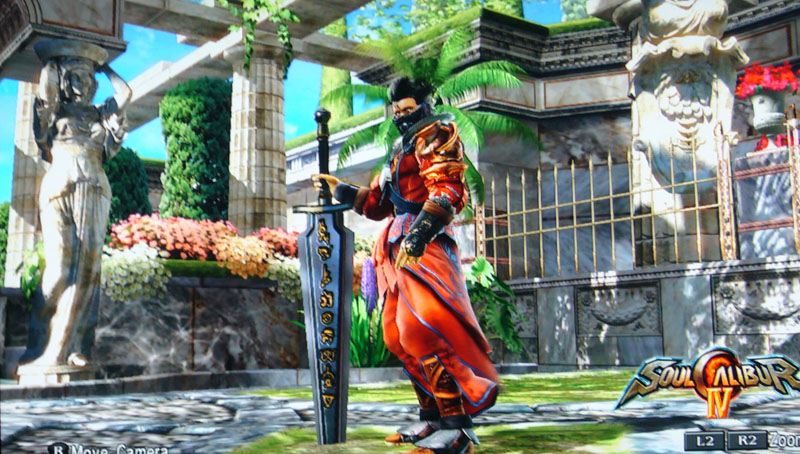 I think I did a fairly good job with this one. The shoulder piece is actually part of the recently released downloadable content costume pack. The only gripe I have about this one is Auron’s pants are supposed to be black. Unfortunately, the costume’s tint changes both the pants and the flap. Obviously, Tidus, Cloud, Ashe, Vaan, Penelo and other FF cast are on my to recreate list.

Here are the details on how Auron was made.

When I saw that there was a beret in the game, I just had to make Cammy: 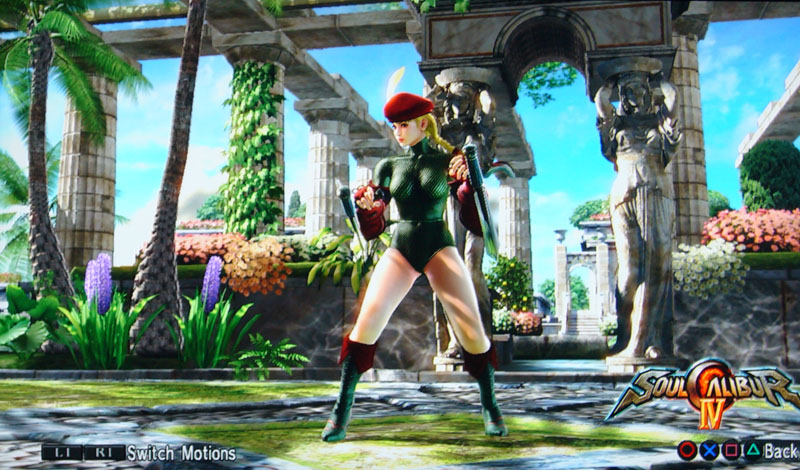 The braided pigtails for her hair are different than the ones used for Miku, as the Miku ones actually have tied up buns, these ones hang down, just like Cammy’s, though not as long. The body suit isn’t quite right, as Cammy’s should be sleeveless, and as I recall, backless. Hopefully there is a better body suit to unlock. If there isn’t, then I’ll have to revise Cammy to her version 2 counterpart:

a full body suit, with a yellow necktie, and a different beret, which btw, is available.

Here are the details on how Cammy was made.

While we’re on Street Fighter, I decided to create Sakura Kasugano as well: 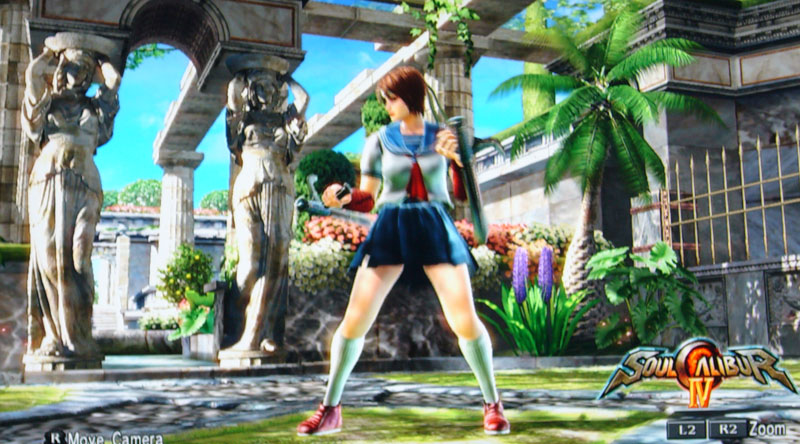 I’m actually suprised how well she turned out. She’s accurate down to the red underwear! I do need to change the socks though. They’re too long. The other option for socks right now are ninja ones. Hopefully I’ll unlock better short socks. If you’re playing in Japanese voices, the voice I chose is fairly good too, mimicking Sakura’s battle cries. And with Talim’s gear, she can even to a Shououken!!

Obviously, Dan Hibiki, Ryu, Ken, and Karin Kanzuki are on my list of recreations now.

Here are the details on how Sakura was made.

Up next, I decided to recreate Nakoruru from Samurai Showdown/Spirits: 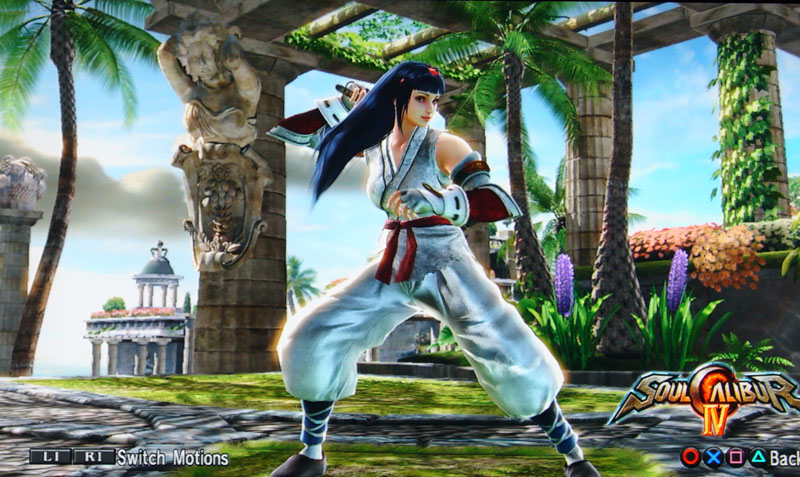 Creating Nakoruru was quite frustrating. The Spy Robe that I used for Kasumi would have worked well, but it apparently cannot be used in conjunction with the pants. While the male costume parts has pants that have a long flap on it, the female costume parts don’t AFAIK, since I haven’t unlocked everything. I don’t have much to say on this one… other than it sucks. Maybe I’ll be able to update her later with better costume parts.

Here are the details on how Nakoruru was made.

Moving along the SNK path, I made Yuki from The Last Blade! 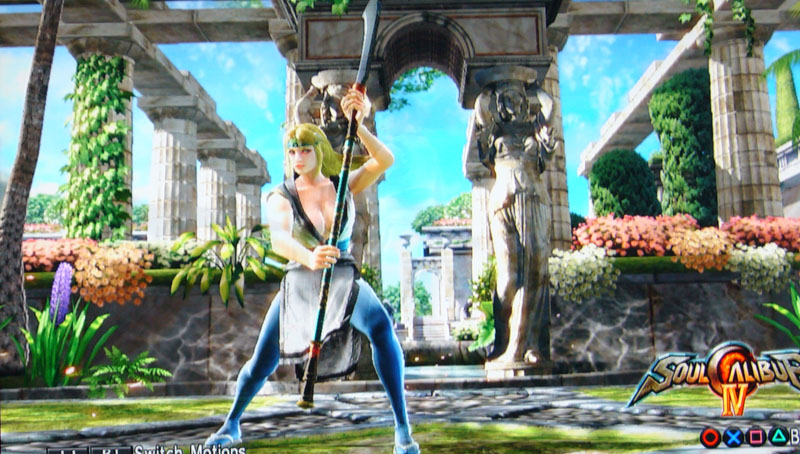 Using the same Spy Robe for Kasumi, I was able to get pretty close in terms of design, but I think the reference I had originally used was off in terms of color, so I’ll need to go back on it. Of course, the borders can’t be changed, so they had to remain black. While she’s a simple character, it seems that the simple characters are the easiest to recreate anyway. Yuki isn’t very well known, so I expect a lot of people online will just think she’s a terribly made CaS. There’s definitely more room to play with, so I’ll be making more Last Blade characters for sure!

Here are the details on how Yuki was made. 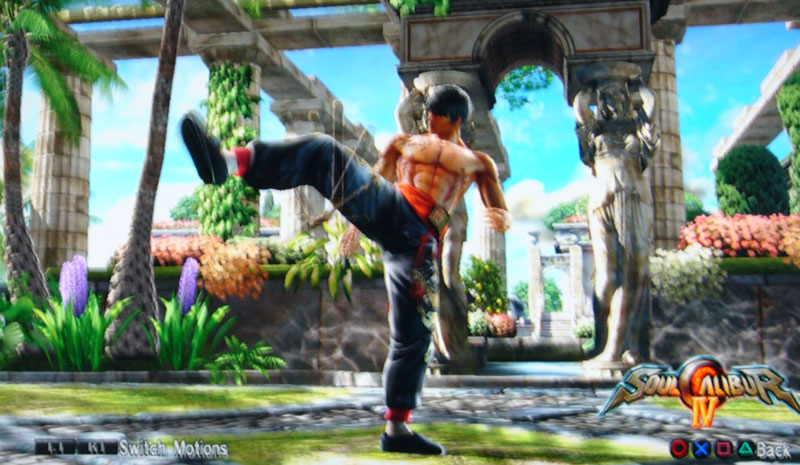 With Maxi’s moveset, it’s a no-brainer. I’m certain that a lot of people have Bruce Lee in their CaS line-up too. Tried my best to match a good voice to him. Again, Japanese. This brings to mind Kill Bill’s The Bride tribute to Bruce Lee… boy I’m lovin’ CaS.

Here are the details on how Bruce Lee was made. 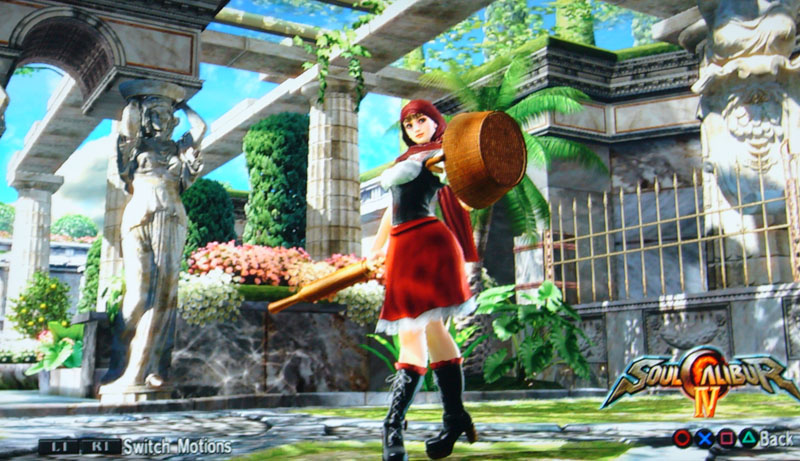 Getting impaled by a rolling pin, and then knocked in the back of the head with a hand basket? Priceless! Interestingly, this time around, there are more “animal heads” to choose from, one of which includes a wolf head. Anyone up for making a Wolf?

Here are the details on how Little Red Riding Hood was made.

Of course, what brought Little Red Riding Hood to mind was my original idea – Alice in Wonderland: 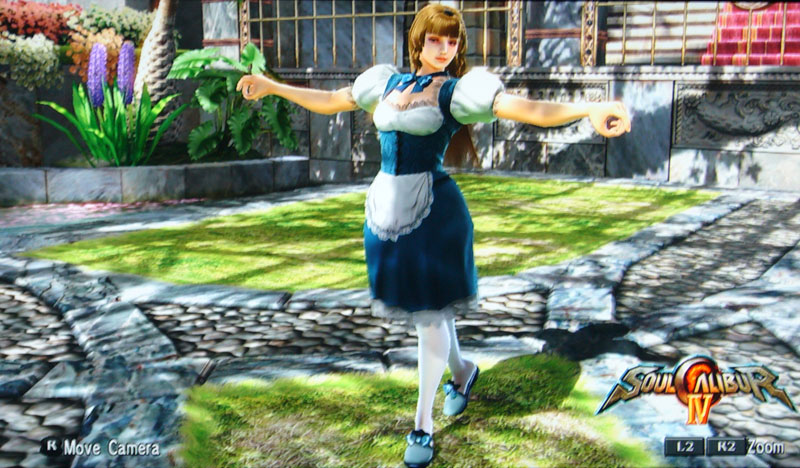 This isn’t quite accurate at the moment. The colors are a little too dark compared to the Disney Alice. I’ll probably go back on it and re-tint it.

Here are the details on how Alice was made.

Since we’re on the subject of non-video game/anime characters, here’s someone that I’m sure you’ll recognize: 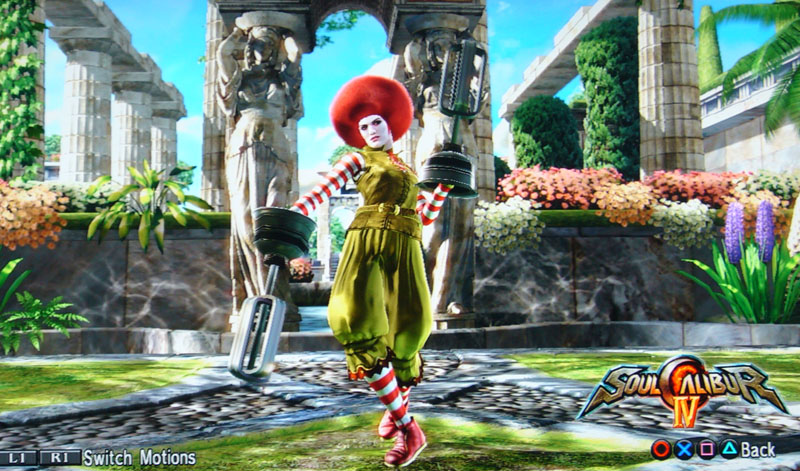 People on the NeoGAF forums have been asking me how this is done as it seems impossible for them to recreate. (The secret is that this Ronald is female.) The costume for the stripes is only available for the female cast. That’s okay, since making Ronald super scrawny, and female added to the creepiness. The fact that he uses Voldo’s moveset is barrels of fun. Voice setting is again Japanese. Suitable too!

Here are the details on how Ronald McDonald was made.

Of course, it wouldn’t be complete without Hamburglar! 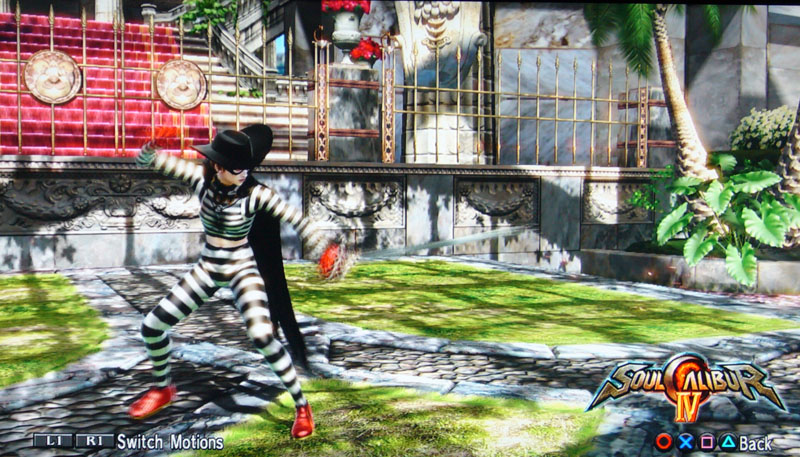 I’m quite disappointed with the cape. There are only two colors to change for it, the black, and the emblem. While most of the other capes have a tintable lining, this one does not for some odd reason. Unfortunately, it’s the only cape I have that is long enough. Revisions are definitely needed.

Here are the details on how Hamburglar was made.

In Soul Calibur 3, they also had a CaS mode, and one of the character I created at the time was Plain Jane. Here’s her SC4 iteration: 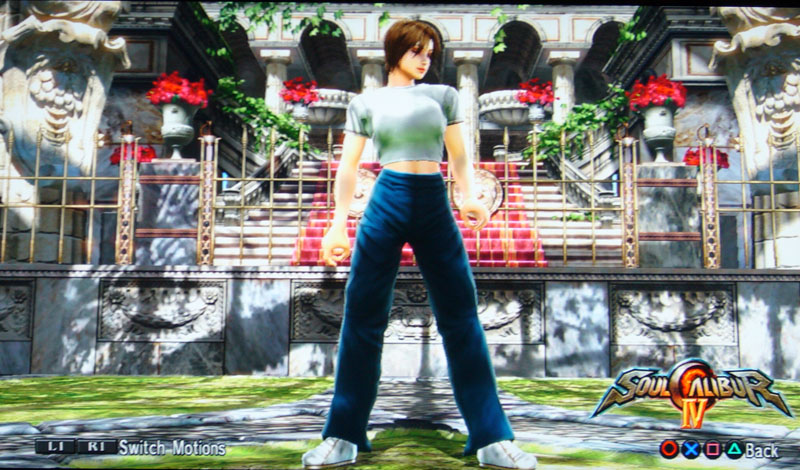 She’s definitely plain, that’s for sure. Sometimes, it’s nice to have a simple character like that.

Here are the details on how Plain Jane was made. As if you really needed any details.

I really like Sigfried. He’s fairly well balanced in terms of the slower, more powerful characters. But sometimes, I can’t stand his voice (btw, he is also the same voice actor for Link). So here’s my first iteration of a female knight. Nothing super elaborate, but she has a nice simple grace to her. 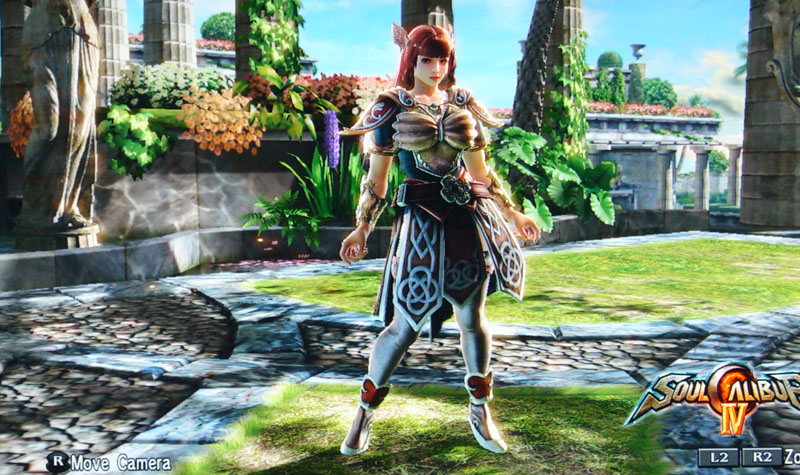 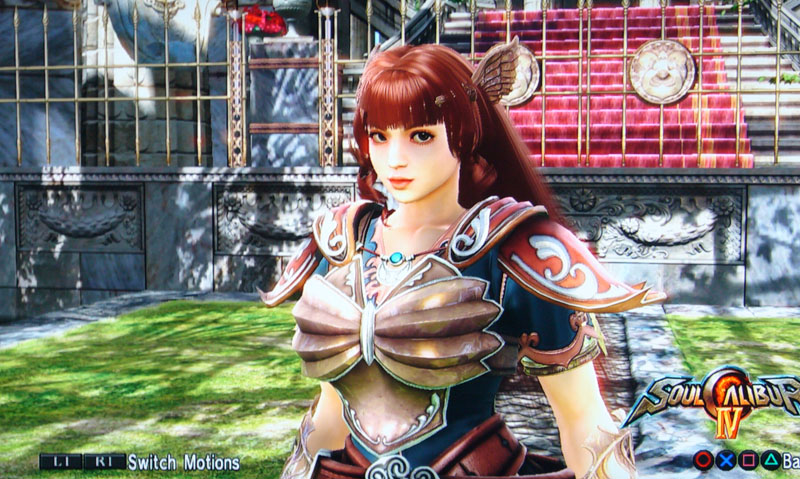 Here are the details on how Sienna was made.

In addition to my own creations, the members of NeoGAF have created some awesomerecreations as well! The details provided are my own iterative modifications to them for color accuracy, and a few minor tweaks. 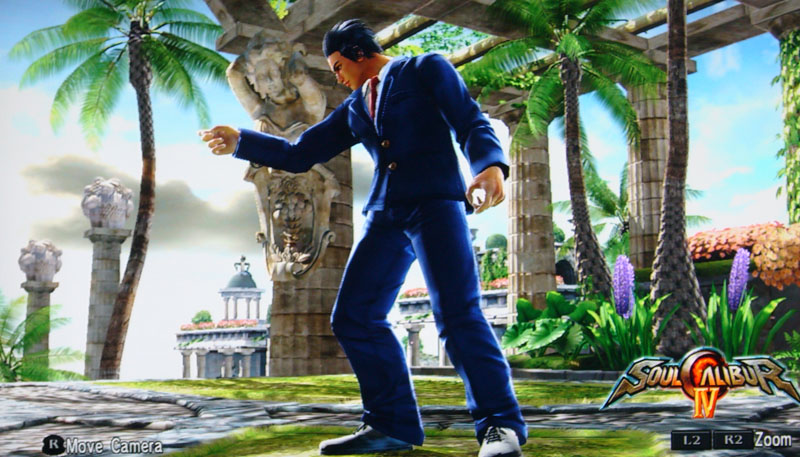 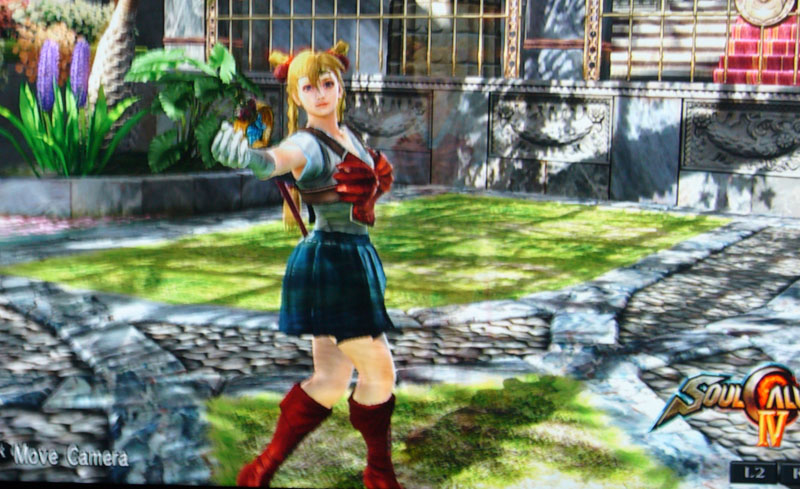 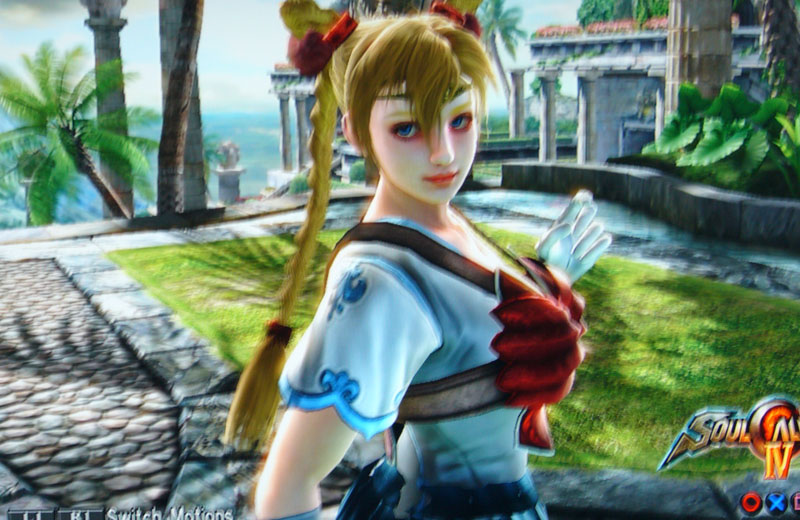 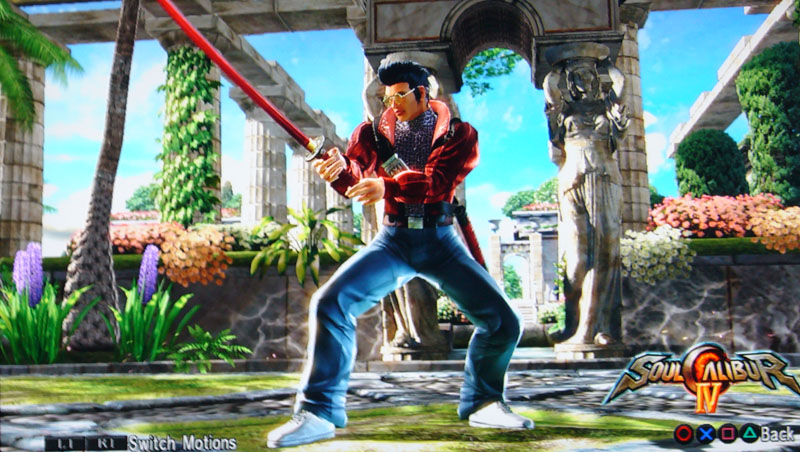 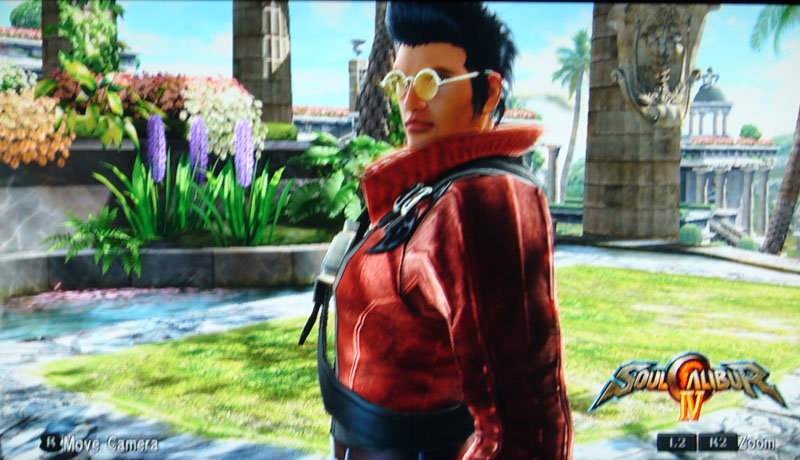 This was definitely a long post. I hope you enjoyed checking it out as much as I did creating it. If you’ve got some interesting creations to share, by all means!

Edit: rather than start a new post with more CaS, I’ve decided to just add more here as I go along. 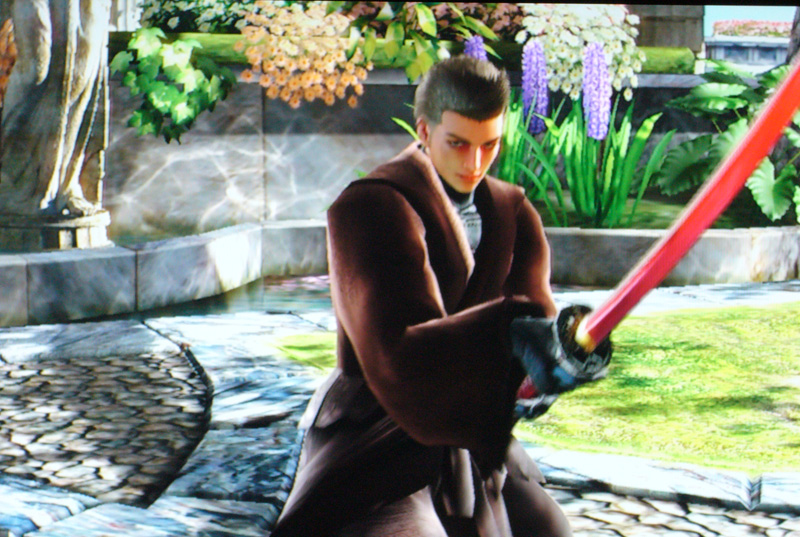 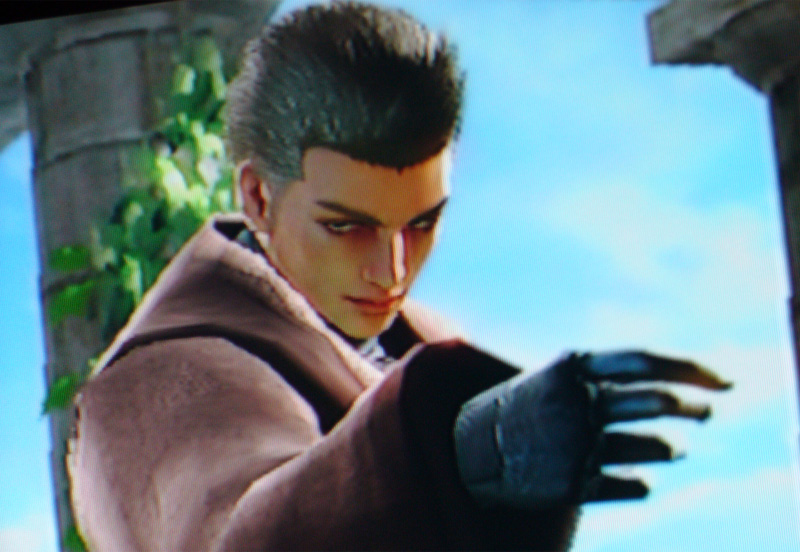 I create stuff in my mind, and try to barf it out onto tangible mediums such as Photoshop, and video game art. Sometimes, I get paid to do it because I'm a freelance artist working in the video games industry. Getting paid to do what I love (video games, and art) is my dream come true!
30,000 hits! yay!
Where’s Radiant?