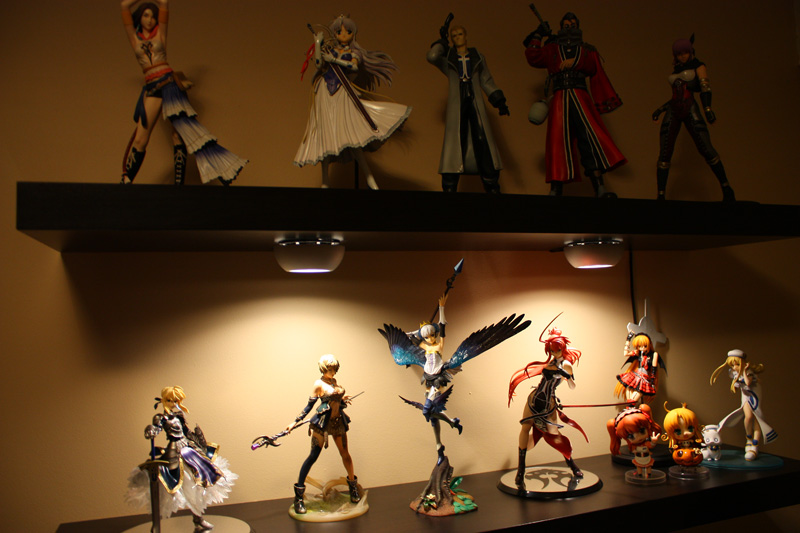 It’s been a long time since I’ve posted any of the recent figures I’ve purchased. Yet, I’ve been constantly complaining about my lack of space, and the figures I have been selling, I’m not actually getting rid of my entire collection – space or not. Many of my figures are packed and stored in my closet. Well, less than 30%, if I would have to make a guess…

There are quite a few figures that I just can’t part with, even if they’re put away in the closet. I’m sure many of you have the same problem. My own personal solution? Cycle them ocassionally. I’ve done it once or twice already, and it’s always fun, and your shelves never look boring. I like re-arranging my figures so they have a theme, or some sort of cool looking composition, or maybe I feel like “featuring” one particular figure, and place her under the spotlight.

As such, I’ve decided to document how my collection changes over time. This would be the second time I’ve taken photos of my own collection.

More photos after the jump! 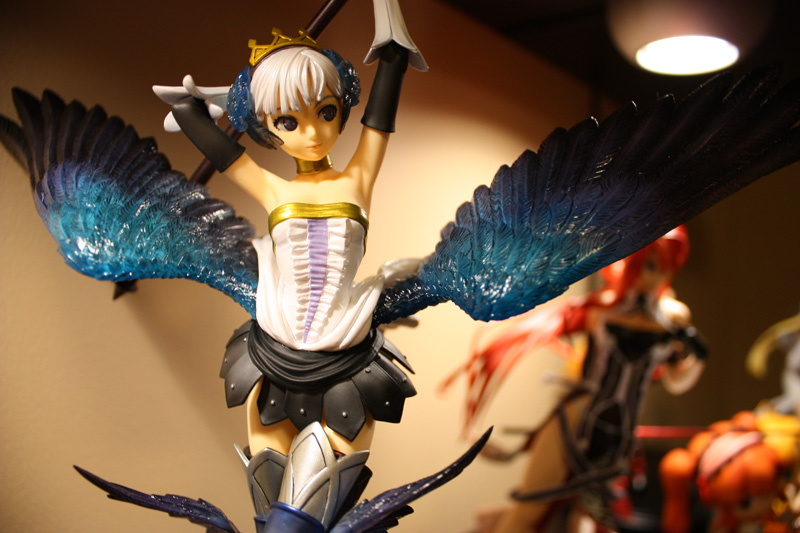 My current favorite in my collection, is the beautiful and elegant Gwendolyn, from Odin Sphere. Manufactured by Alter, she’s 1:8 scale. A beauty to behold in a full-length shot. Hopefully I’ll have time to review her in depth at some point. 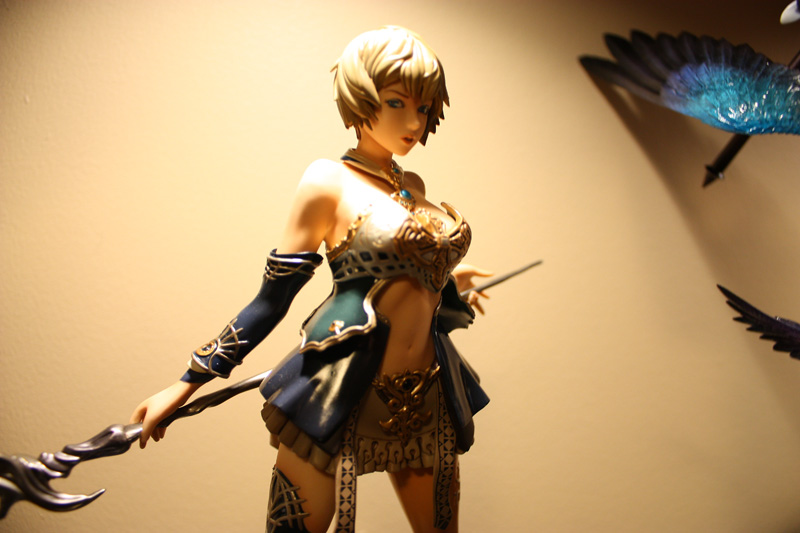 Besides the beautiful Gwendolyn, I also purchased the Human Mage from Lineage II. Interesting, she looks a lot sexier than I ever remembered. 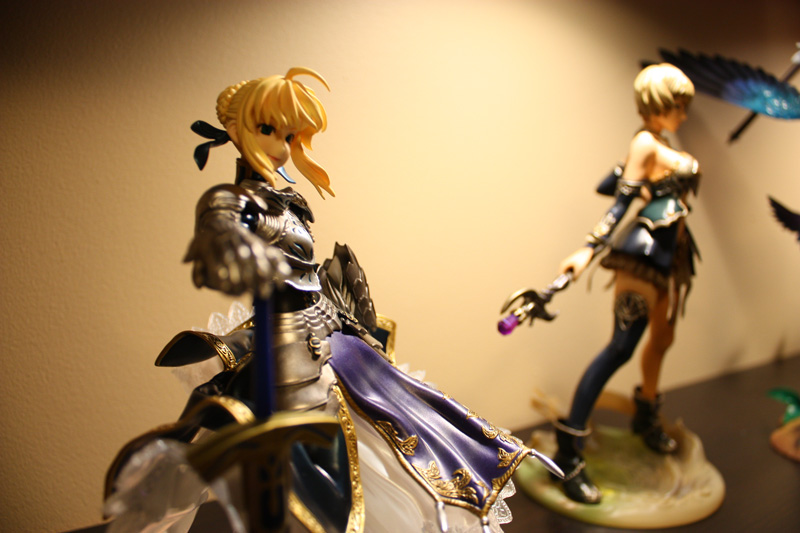 To the left of my Human Mage is Saber Gift. That’s right, AFN readers. I decided NOT to cancel this one in favor of Saber Lily. I think when Lily get here, she’ll make an excellent compliment to Saber Gift. 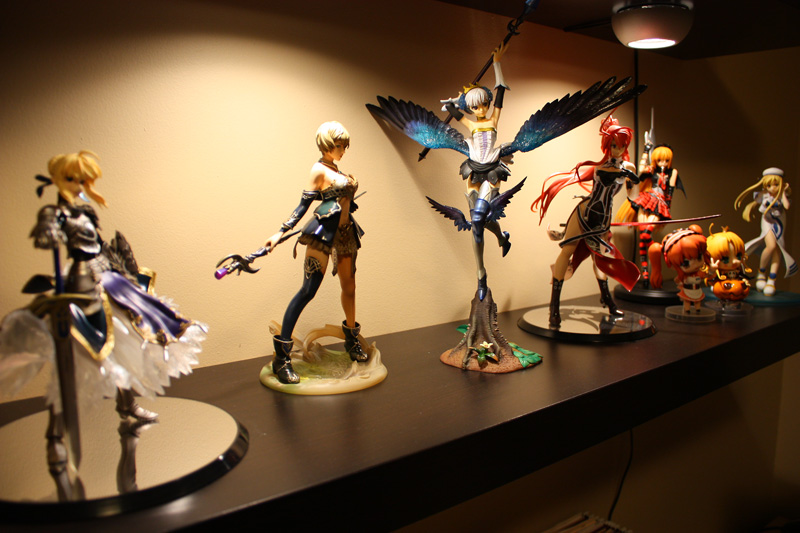 Recognize anybody? This shelf is situated right above my computer desk. The shelves themselves are Ikea LACK shelves installed into the wall. I had to drill the lights into the LACK shelf above, and do some special stuff to tuck the wiring inside the shelf. I hope to someday fish the wire through the wall so that it’s not so unsightly, but well… 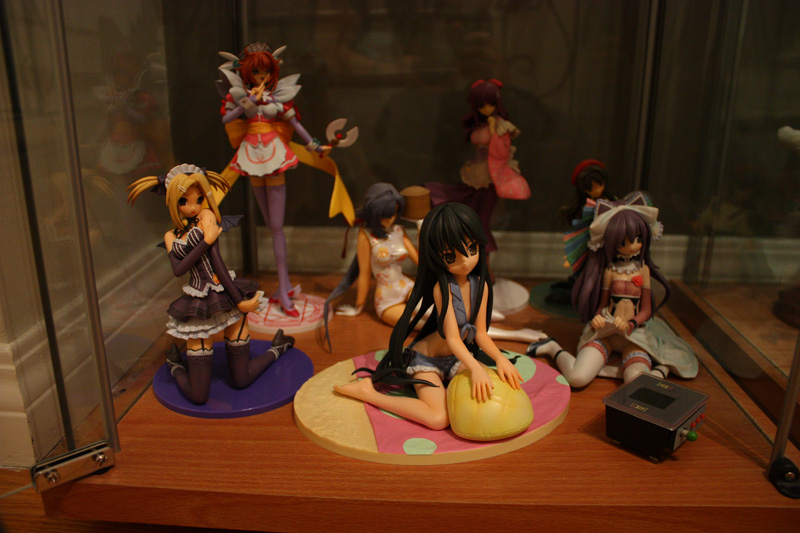 I’ve got two Ikea DETOLF shelves in the hallway, and they fit beautifully into a relief in the wall. It’s almost like they were meant to be there. This is my lowest shelf, where I put all my waitresses, and maids. I’d unfortunately have to call this shelf the “Bottom Feeder”. The problem with display shelves is that people rarely look at the bottom most shelf. This is the reason why most of these girls are sitting down. Figures standing up are even harder to see because of the angle. With them sitting down, they cover more space, and as such are more visible. 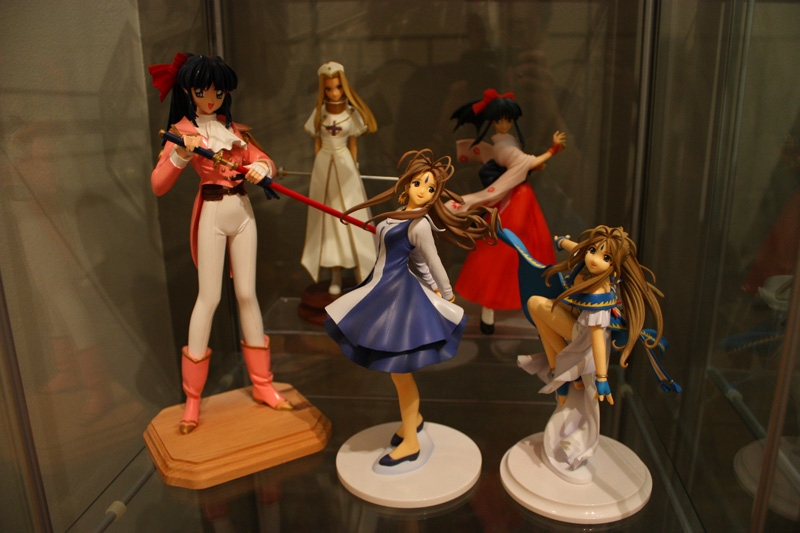 The shelf just above the Bottom Feeder. Currently, the “Goddess” themed shelf, so to speak. Yes, I do consider Sakura Shinguji a goddess, but only because she was a gift from my wife. Truly my very first 1:8 scale figure. The other 1:6 scale figure is a resin kit that I painstakenly painted and put together. I love it. 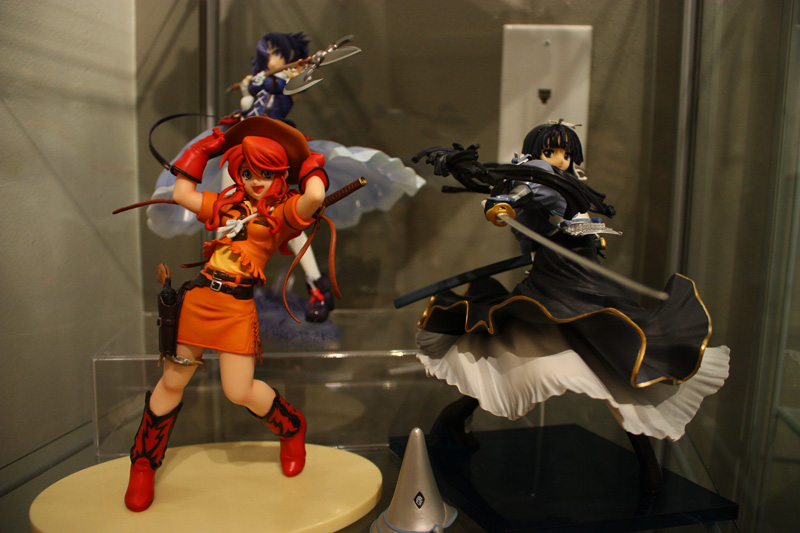 Above the Goddess shelf is the “Quirky Pose” shelf. They’re dynamic, but don’t really make much sense. Rize used to be in the Shuraki themed shelf, but a peg broke, as many of you Rize owners may have experienced. Yes, that telephone jack does work. Some of you may recall in my previous Current Collection, the back wall was yellow. I think that painting it this accent dark brown really brings out the figures. 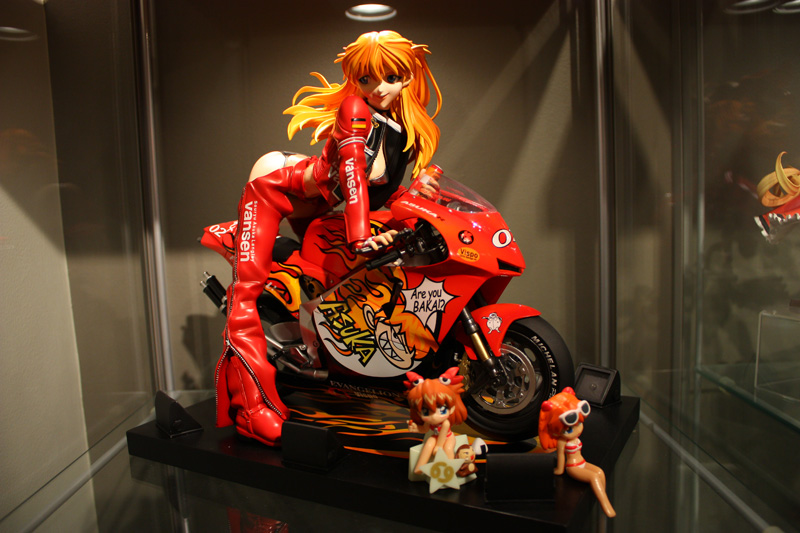 The shelf above the Quirky Pose shelf is my featured Asuka on motorcycle. This baby is supposedly 1:6, but it seems MUCH bigger than that. The detail is astounding. I’m definitely going to do a review on her at some point. My readers deserve to witness the beauty of this one. The two little Asuka gashapons were a later addition. I’ve had them for a while, sitting on my LACK shelves, but never made the connection to put them here. It complements well, I think. 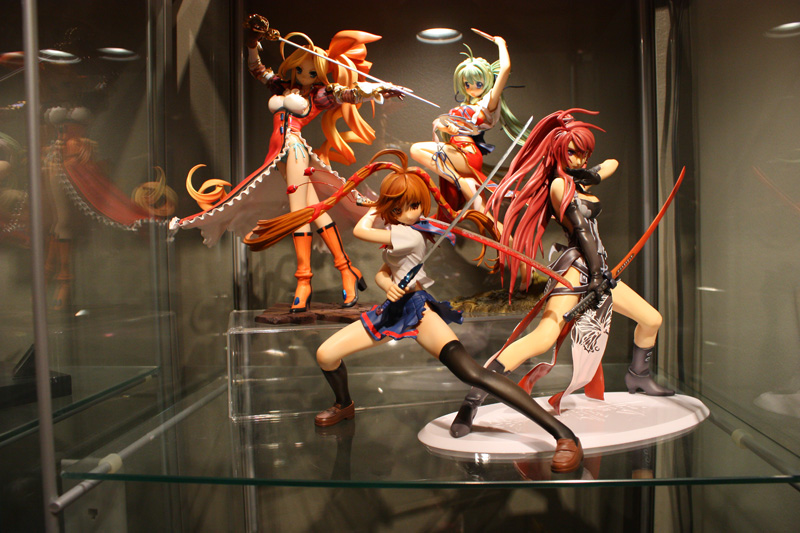 Now, onto the DETOLF directly to the right. This top shelf feature is the “Oriental Battle Weapons” theme. Though Shall doesn’t seem to belong in that theme, the pose certainly does!

The shelf directly below the “Oriental Weapons” theme shelf is my Final Fantasy shelf. These three are completely cold cast. I’ll do a review on them at some point. 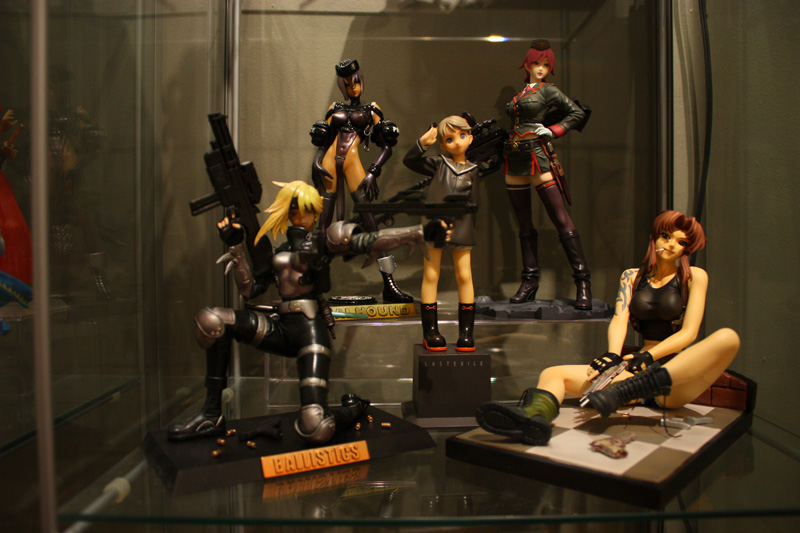 The shelf directly to the right of the Goddess shelf, is my “Militia” themed shelf. Guns, guns, and a cute little Alvis Hamilton doing a salute. It can’t get much better than this!

This isn’t the end, of course. I still have two more shelves in another room, and another two shelves in the living room which I haven’t covered yet! Stay tuned!

I create stuff in my mind, and try to barf it out onto tangible mediums such as Photoshop, and video game art. Sometimes, I get paid to do it because I'm a freelance artist working in the video games industry. Getting paid to do what I love (video games, and art) is my dream come true!
Asuka Langley on Motorcycle
Sakura Shinguji