My story… is rather simple on the surface, but deeply rooted.

I have always been an avid fan of Anime. I grew up in the Macross/Robotech era. I didn’t really understand anime back then as anything different from other cartoons, but took it for the face value that I saw, much as I took to He-Man and GI Joe and Transformers at the time.

It wasn’t until high school that I had a more serious point of view on Anime. Watching series like Maison Ikkoku and Orange Road, I could identify with the main characters and their pursuit for happiness with the woman they admired. My identification with these characters stemmed from my own silent crushes with the many girls in my school. Always thinking, never acting.

It wasn’t until I went to college that I started getting more interested in Anime and became a proud collector – buying anime CDs and posters, talking about Anime, and playing anime related video games. This was mostly due to the friends I met whom I still consider them my best friends.

I had realised that my interest in Macross and Gundam was minimal. I was more interested in the likes of Morrigan, Armitage, and Sharon Apple. (this was the mid-90’s) Strong, independant, and sexually librated females, my adaptation of these personas projected through my avatars in online RPGs (back then, they were text based). I adored how these females were comfortable and confident about their sexuality, and respected themselves to not flaunt it in a degrading way. 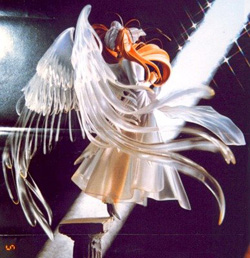 My interest with Anime figurines began when I saw the very opposite of these personas appear in the form of an Anime figurine – Belldandy. This version is well known – with wings, and a white dress, she stood on the tip of a pillar, with her eyes closed, and her hands clasped together – her hair flowing in the wind. Gentle, and very reserved, she neither radiated the same sense of strength or sexuality, but instead showed incredible grace, generosity, and kindness.

But this was not mine to own. It was a resin kit which at the time, I could never afford, nor obtain the skills to paint it in such an ethereal beauty.
Back then, resin kits were the only figurines available. If you wanted to own it, you had to have the skills. This was a figurine beyond my reach, forever. Or so I had thought… 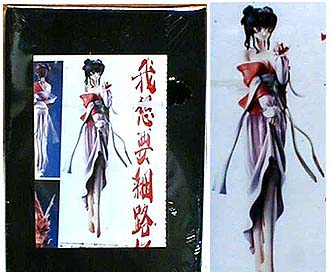 My second brush with Anime figurines was when I found a resin kit of a beautiful girl in a chinese dress, one hand grasping her clothes gently around her, the other, palm facing outwards. Ribbons of cloth flowed around her in suspended animation.

Again, this figure showed the same type of demeanor as that of Belldandy, but with a more asian take to it. However, I didn’t know this at the time, but this figure was actually based off of a popular hentai manga called Countdown Sex Bombs, made famous by the manga-ka Hiroyuki Utatane of Seraphic Feather fame. This figure had the simplicity that I could handle in painting. This was something I could own! But alas, I could not afford it… Resin figures were and still are a very expensive hobby. The cost of a resin figure unassembled and unpainted are equivalent to a mass produced PVC figure. And don’t forget you have to buy paints and supplies too! 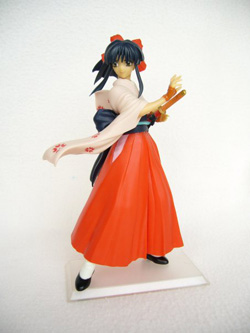 The tip of the iceburg to be was my first Anime figurine. This was shortly after I had met my wife online. Since she lived overseas, she was the only one capable of giving me that figurine. It was Sakura Shinguji. An elegant vinyl figure of her in a kimono, sword at ready. It was the classic fusion of traditional Japanese culture with modern pop culture Anime. I had seen the figure in a popular Japanese anime/game magazine and discovered that it did not require assembly or paint. This was the very first mass-produced, prepainted figurine that I had my eyes set on. A gift from my future wife, no doubt!

Because of how special this gift was, Sakura is still proudly displayed, and will forever be in my collection as my most prized figurine.

I create stuff in my mind, and try to barf it out onto tangible mediums such as Photoshop, and video game art. Sometimes, I get paid to do it because I'm a freelance artist working in the video games industry. Getting paid to do what I love (video games, and art) is my dream come true!
Yotsubato! "You Must Be Tired of Livin’."
Radiant Dreamer reaches 10,000 hits!!!