A while ago, Kodomut did a wonderful photoshoot of Black Rock Shooter Figma. Unfortunately, things didn’t turn out. He felt the bridge was too small. I decided to ask for the source file so I could get a crack at it in photoshop.

While I do agree that the bridge was too small, I decided that it didn’t have to be a bridge. It could be a ruined piece of something bigger that BRS was perched over, like a ledge. 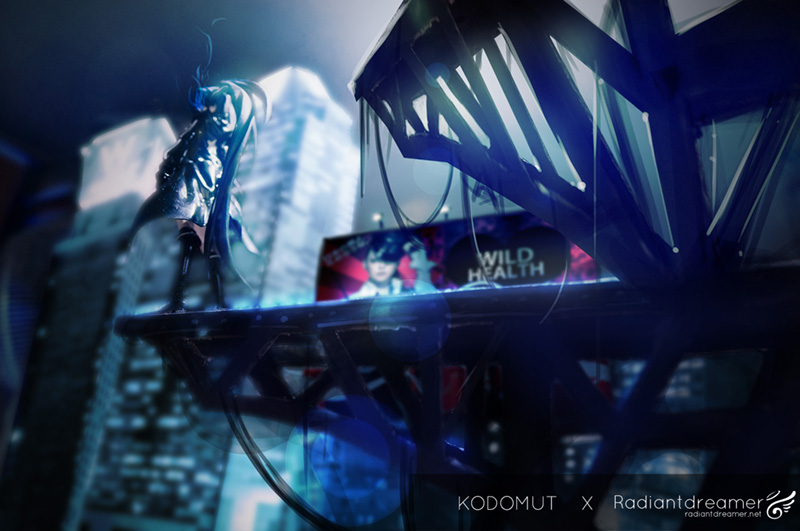 I duplicated the “ledge” and did some warping around of it to show that there were basically more of these lying around here and there, and somewhat displaced.

This is a somewhat unorthodox approach to my figure photoshops, since I didn’t cut the background out, but in fact utilized it as part of the entire image.  The buildings were scaled and warped to match the boxes in the background, and I deliberately kept part of the fan to look like some sort of futuristic building structure. I used the frame on the wall as a guideline to place the billboard (though in retrospect, I don’t think I should have due to perspective errors). And I used the wall and lens “glare” as part of the sky lighting.

I had to paint in my own lens flare since I painted all over the image. I don’t think I’ll be doing my photoshops this way anymore though. Cutting the subject out first makes it far easier to control the lighting and filters applied to it. Using this method, I had to create A LOT of layer masks and adjustment layers. Ultimately, I had to flatten some layers too to get it to work, which is not a very good practice at all.

Here’s a video of it being made, with a timer to show how long it took, complete with hardcore Miku rock music.

I definitely had a lot of fun doing this! Thanks for the pic, Kodomut!

On another note, I finally finished Valkyria Chronicles 2, pulling in at 67hrs of total play time. This and I deliberately turned on no-grind cheat codes (exp multipliers) to speed up my playtime.

I tried to play the english version when I bought the game, but I really couldn’t stand the horrid dubbing. I resorted to grabbing an Undub ISO off the net. I figure that it should be fine to do so, since I do legitimately own the game. I’ve given my support (and hope VC3 will be released in North America).

I must admit though, VC2 is a mixed bag… 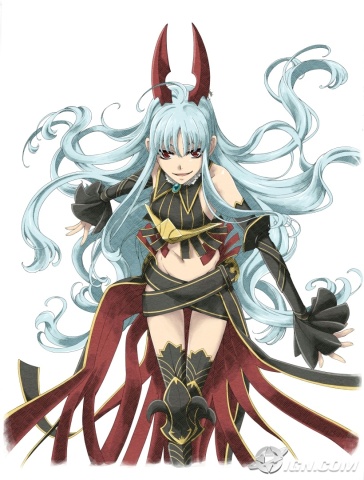 The first gripe I have about it is how it just simply doesn’t look like Valkyria Chronicles. I’m not talking about the fact that it’s PSP graphics, but the art style they chose is deliberately anime (as in the mainstream series). Normally, there’s nothing to complain about, but VC1’s style had a distinct flavor about it, much of which is lost here. Putting cross hatching in your shadows does not make it VC.

Secondly, there’s the costume designs. Shown above is the terrible design for Aliasse, a Valkyur. (I won’t elaborate on the plot here). Those weird rabbit-ear horns are just wrong! Also fan-service seems a bit thick here, especially for the loli-fans. Thank god you only have to see that outfit once.

Without getting into too much detail on the characters and story, this should explain everything: 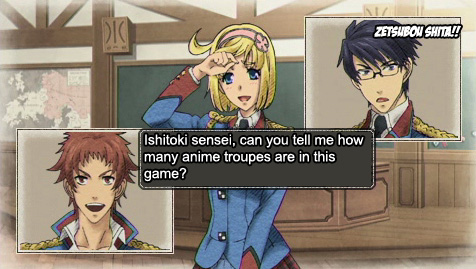 Zeri: Zetsubou shita!! The predictable plot of troupe-tastic anime JRPGs have left me in despair!!

I do however, approve of some of the voice actors (JP voices in the Undub. Not available in North American retail release). The dude with the glasses is voiced by none other than the guy who voiced Ishitoki Sensei. I’ll bet it was deliberate that one of the characters who follows this guy around is also a stalker.

The blond clutz in the middle is voiced by the same actress as Ami from Tora Dora (and Juri from Super Street Fighter 4!!). Aliasse is voiced by the same voice actress that voiced Nagi from Kannagi. Both have long blue hair! I’m sure there are more, and deliberately chosen voice talent that I’m not aware of. But it’s neat little homage/trivia.

Outside of the troupes and predictable non-plot, I really enjoyed the little banters between the classmates. While trivial and pointless, it did reinforce the troupes they were trying to fill, and made them a bit more likable (if you abandon the frustrating realization that they are troupes). I found these characters quite endearing in the end.

The best part about this game though, is the mechanics. They essentially took everything that was good about VC1 and improved on it. They went a little overboard, and introduced a bit too much clutter, but overall, it was an improvement. Some annoyances were removed, and some mechanics changed slightly because of the PSP’s limitations, but it’s a great game overall. I absolutely cannot wait to play VC3 and hope it will be the best of the three.

On another note, Gallian paper-craft tank is so much win.

Anyone else here a Valkyria Chronicles fan? Or maybe you have something to say about anime troupes in video games in general?

I create stuff in my mind, and try to barf it out onto tangible mediums such as Photoshop, and video game art. Sometimes, I get paid to do it because I'm a freelance artist working in the video games industry. Getting paid to do what I love (video games, and art) is my dream come true!
Ignis by Alter 1:8 Scale – A Difficult Parting
Understanding the Silhouette – How To Design A Character