Another painting with photoshop diary! I haven’t painted anything anime in quite a while, and it’s something I’ve been wanting to do, but have been putting off for some time now. Getting back into it was difficult, and I gave up on a piece mid-way because it just was not what I wanted. Check out how this one was made after the jump!

You may have noticed in the past, there was a little purple-haired girl blinking at you at the top of my blog. I’ve been playing with the site mascot idea for a while now, and I liked the main aspect of her a lot – her headphones, and that cute purple/pink hair. But one thing was definitely missing – clothing design. She started off wearing a simple school uniform, which was in my opinion, pretty generic, but worked at the time, and was pretty cute. 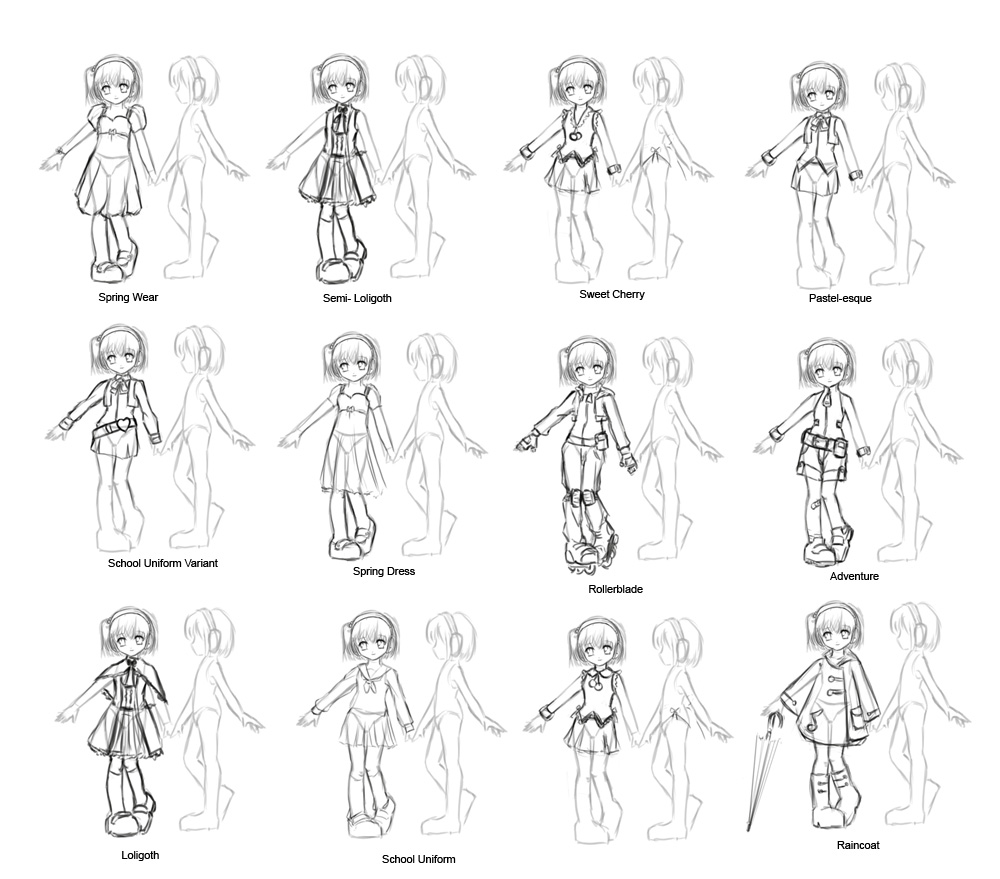 Starting with a base moe-model, I sketched several different articles of clothing that might be suitable for her moe-ness. The first one was a revamp of her current school uniform, followed by others like the loligoth. I quite like the Lara-esque Adventure outfit. I finally settled on the adorable raincoat. It’s definitely the cutest one. And since it rains a lot in where I live, it made the perfect statement.

I was going to write a post asking readers what her name should be, but then it dawned on me pretty quickly. Her most prominant feature were the headphones she wore. She wears them everywhere. So it made sense that she liked music. “Melody” sounded like a pretty fitting name for her.

I started painting a full-body illustration of Melody, but as it had turned out, I had been losing my skills as an anime artist. I’ve been concentrating so much on non-anime work that my drawing just didn’t look good. I switched gears and for the heck of it, started sketching Melody as a mature looking female. 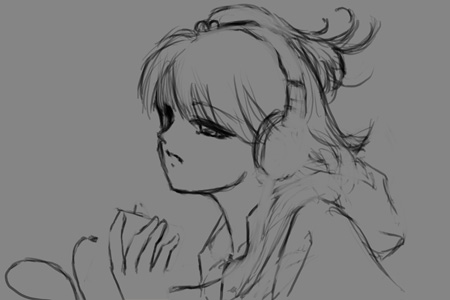 There’s something about the sketch that I really like. I think it’s just how raw it looks compared to the finished, more sterile result. After sketching, I started a new layer, and began drawing a cleaner line-art. I wanted this one to look clean for some reason. 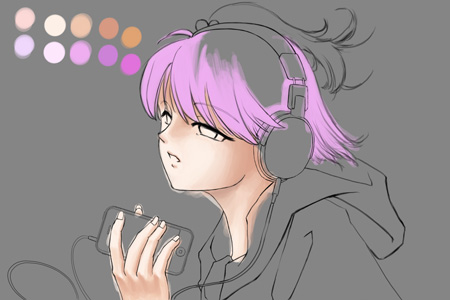 The solid colors usually go in as base first before painting in highlights and shadows. As you can see, my palette is pretty simple. Just like how I had painted the face, I proceeded to do the same with the hair. 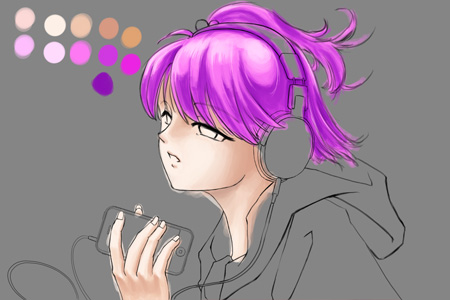 Hair is a little different from most other objects. Especially for anime. It’s a solid mass, yet it also has to appear like it’s not. How it’s shaded is very important. You have to give the hair definition so that it doesn’t just look like a solid blob, but not so much that it becomes a horrendous mess of lines. At this point, I did some revision to the line-art too, and fixed her eye a little. It was too long, and flattened her face too much. 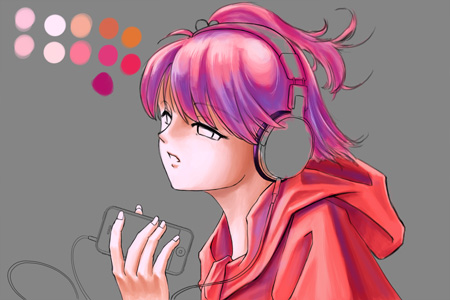 The coat has a nice red tone to it. I decided to change the hair color a bit to compensate and create a nicer blend. Cloth is a bit like hair, in the regards that it requires definition to make it appear like cloth. As you can see from the line art to the colored one, more depth is created, more folds are created to give that definition. 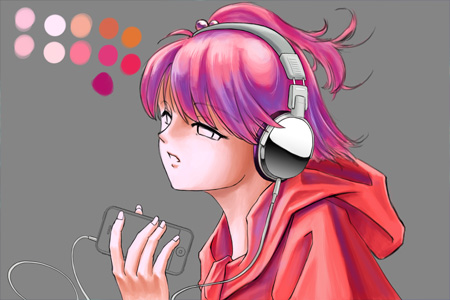 The headphones were fun. They’re actually Audio Technica, ATH-ES7. They’re not the best performing headphones, but they look slick with the mirrored finish. I’m not sure if that particular model will be a permanent accessory, or if she’ll try wearing other types down the road. 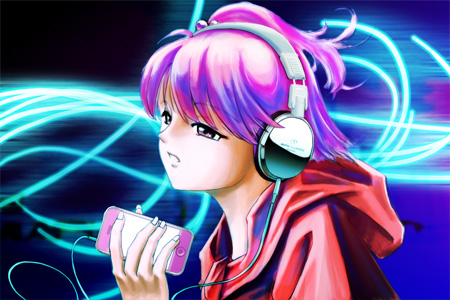 From here on, it was adding layers and layers of FX to create this image. This is the version that is posted as the blog banner right now. After I was done though, I looked back on her hand and felt it was very unnatural looking. I didn’t use any reference, and it showed. I decided to take a photo of my own hand, holding a cellphone, and use that to redraw the hand from scratch. 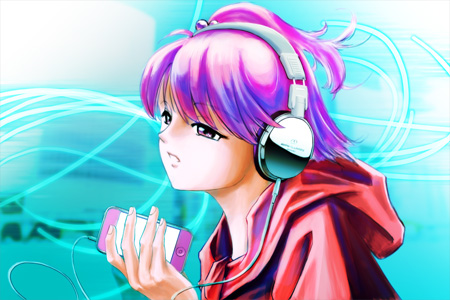 The final result of the hand is a lot more natural. I also changed the FX to be white instead. This gave a more pure look to it. 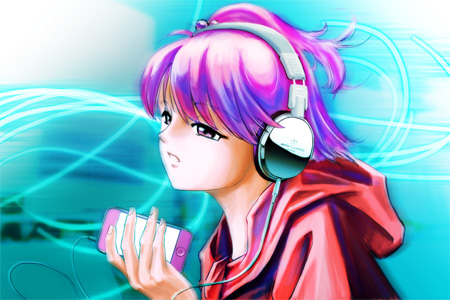 I darkened the background, as well as added some motion blur to it. This helped make Melody pop a little more without it being overbearing.

Overall, I can’t say that I’m super satisfied with this one. Looking back at my other works, I feel this is up to par with Alternate Mikuru, and that makes me feel a little dissatisfied. Alternate Mikuru was good at the time, but it kinda shows that I haven’t improved that much, but my bar has been raised. If I keep at it, I’ll most likely get better results.

I create stuff in my mind, and try to barf it out onto tangible mediums such as Photoshop, and video game art. Sometimes, I get paid to do it because I'm a freelance artist working in the video games industry. Getting paid to do what I love (video games, and art) is my dream come true!
Meido kuki!
Radiant’s Semi-Rant – 63k hits means what?