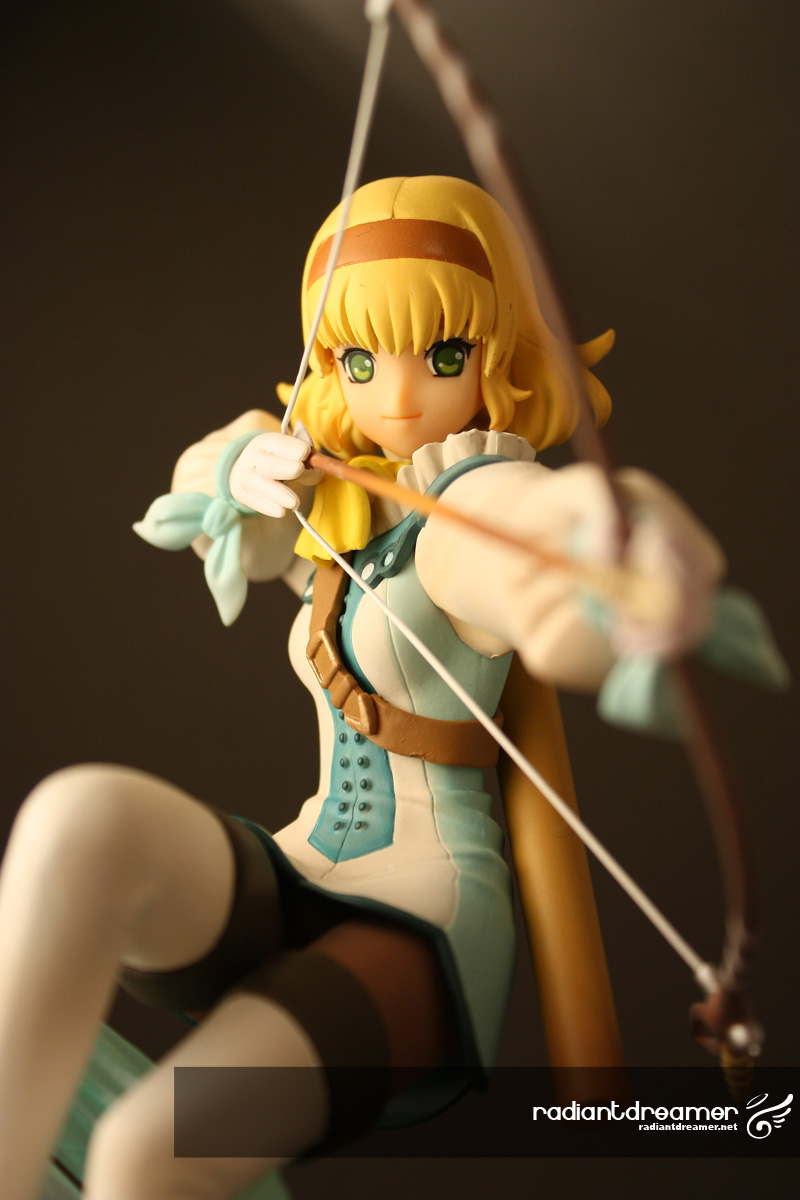 Going through my backlog of already snapped photos, I decided to post this one. Quite the stunning figure that I bought a while back. She’s out of print, and like many Kotobukiya figures, you won’t see re-release. 20 more photos after the jump!

If you don’t already know, her name is Natalia from Tales of the Abyss, a wonderful Namco game that I heard is one of the best in the series. I never had the chance to play it though. Too much backlog! 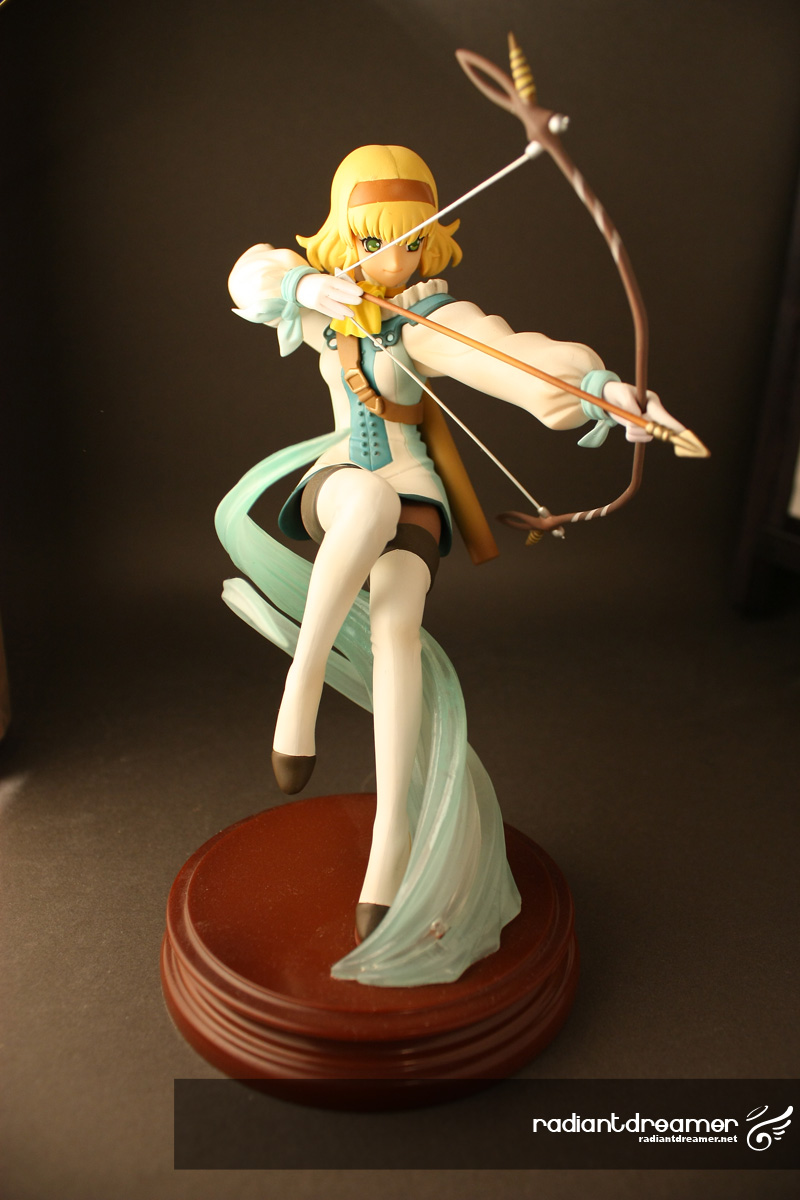 Full view shot. She’s 1:8 scale, but she’s a pretty big 1:8 scale in my opinion. The details on are are very simplistic, which is a rarity for me these days, as anything less detailed than Queen’s Gate Alice is usually a no-go (still haven’t done a shoot of her yet either…) 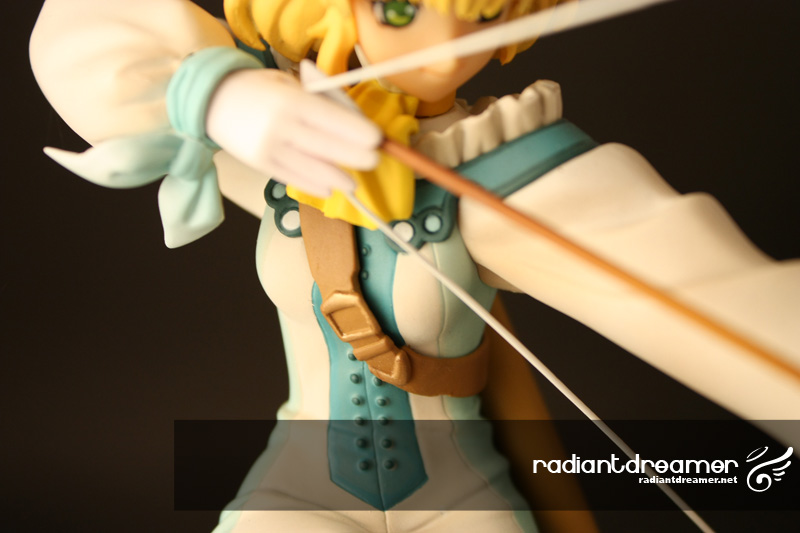 What attracted me about her was how clean the details were. The lines are very well sculpted and perfect. For a Kotobukiya figure, that’s also a rarity for that generation of figures. They’ve gotten a lot better these days, but their sculpt lines are still sometimes messy. 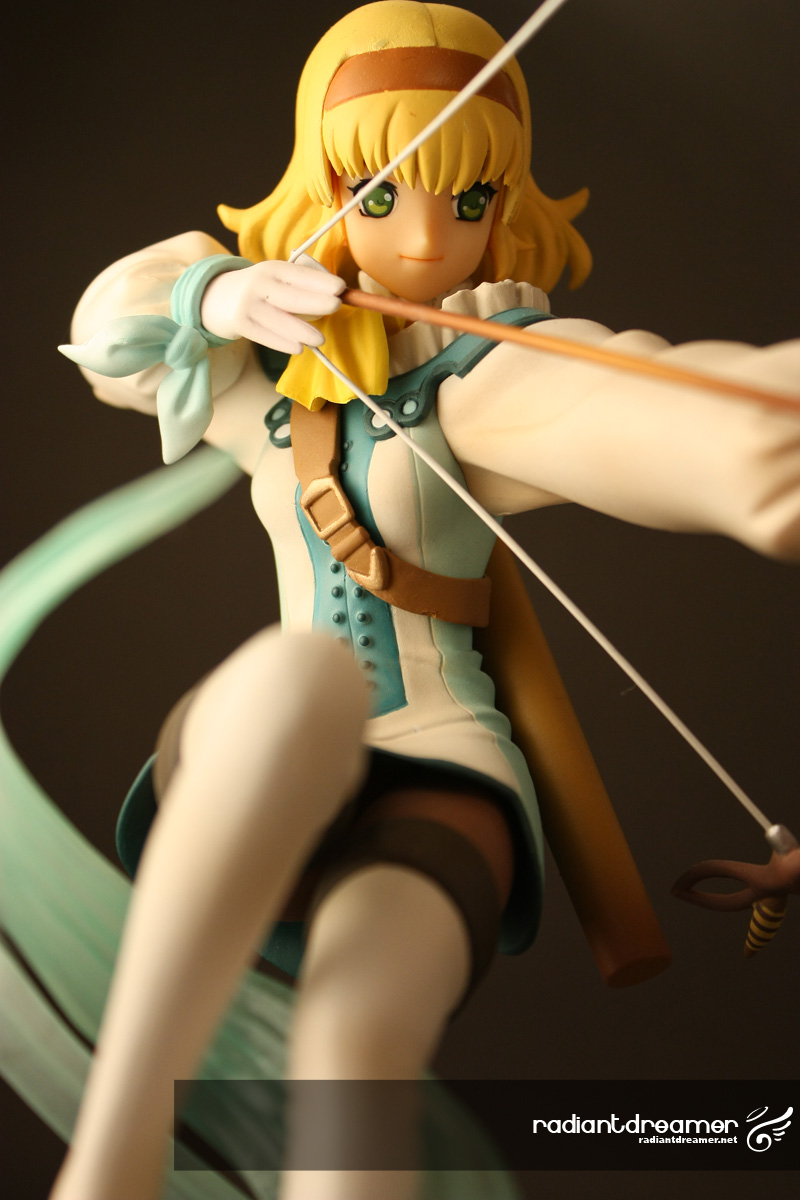 This shot shows off her mid-section and face quite well. I really like the belt and the buttons on her. It’s like really the only area in the whole figure that has a higher concentration of detail. She’s got a pretty cute face too! Makes me want to pinch her cheeks. 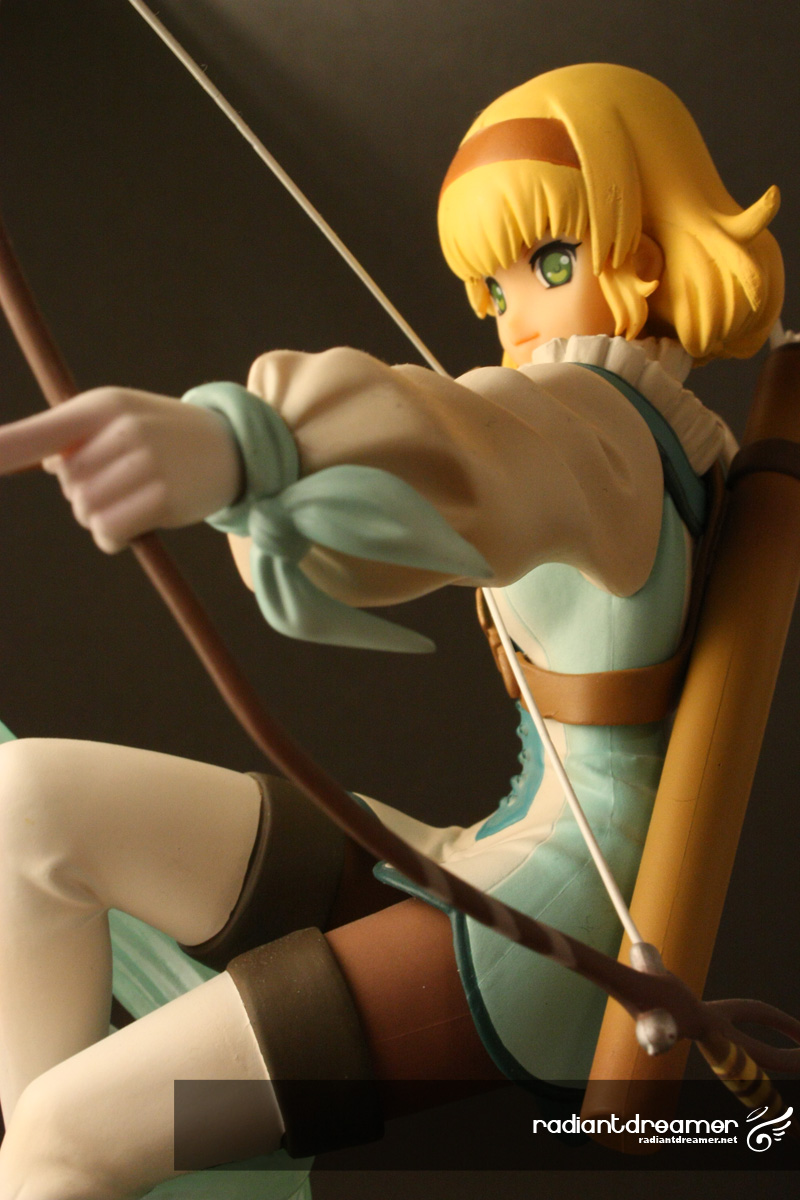 The hair tips aren’t the greatest. They’re a bit thick, but judging from the overall style of the sculpt, it seems fitting. The quality on is typical Kotobukiya to me. Same with the seam line running down the side of her dress. Great paint work on her stockings and boots though. 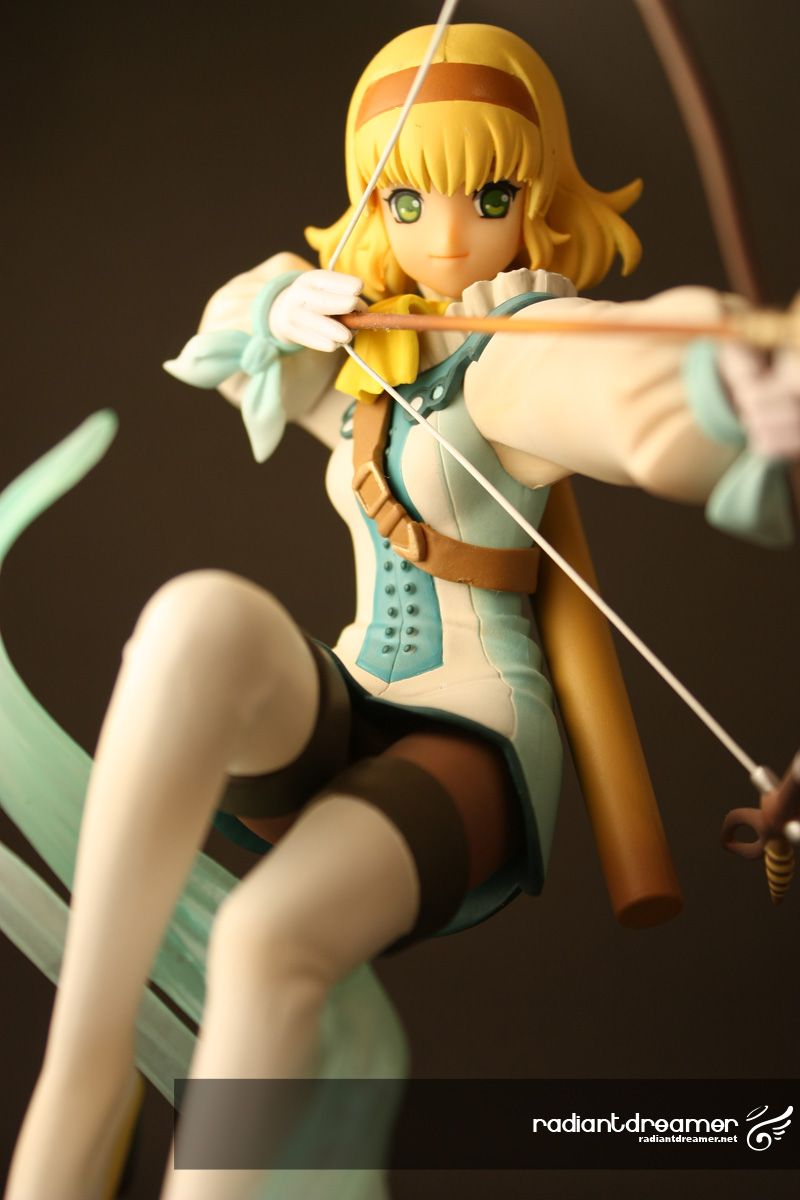 What I also liked about this figure is that she carries a bow. I’m a sucker for anyone carrying bow and arrows. I’ve sorta gotten over that now, since I’ve got several bow-toting hotties. 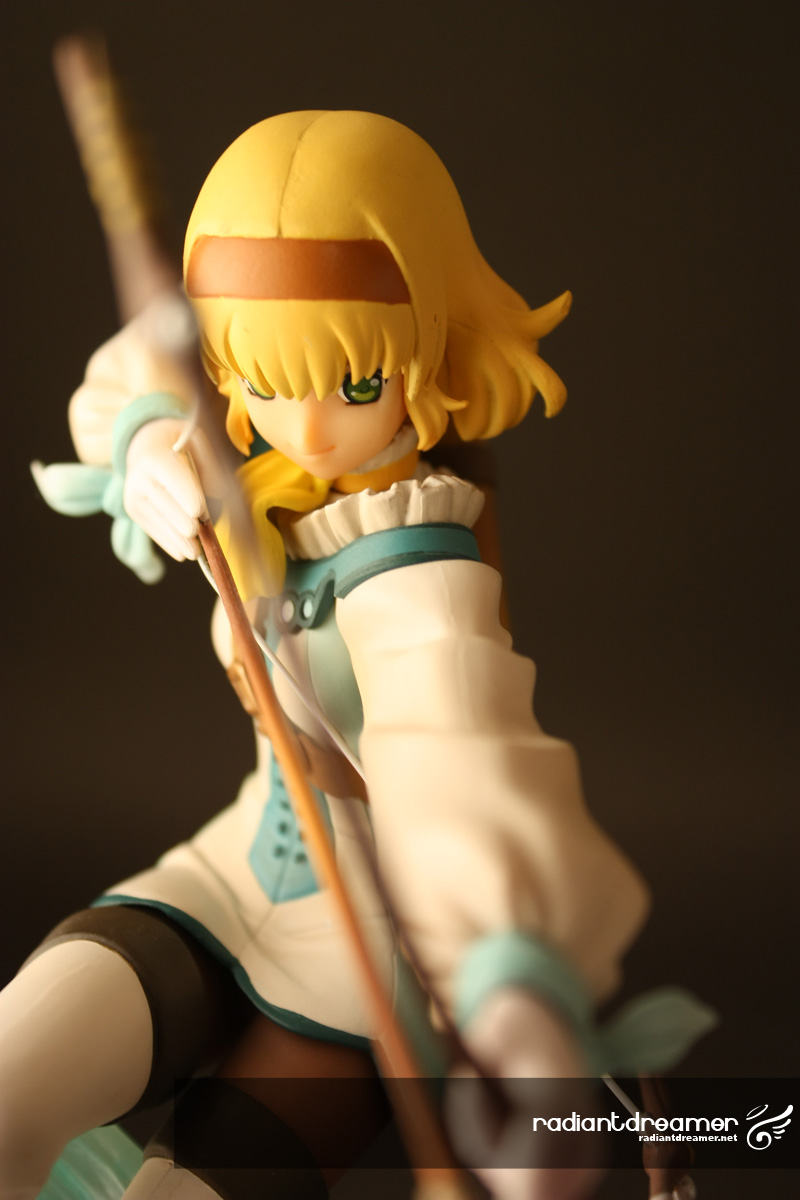 Her hair is very simple yet clean as well. Not as clean as I’d like though. It’s a shame you can see the seam line on her arm. 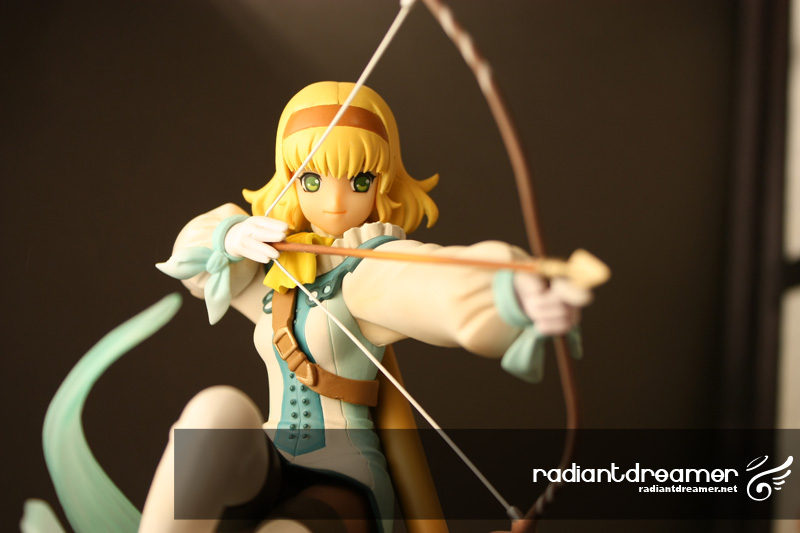 It’s actually difficult to get a nice clear shot with a low aperture to get both the face and the arrow in focus. I blame my lame kit lens, but whatever. Low aperture provides more light, and creates more depth anyway. 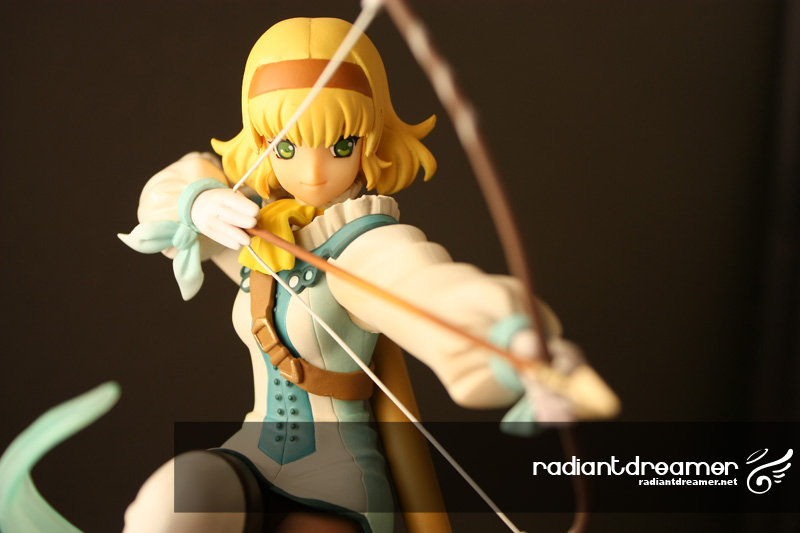 This is a pretty good shot. I was thinking of making a wallpaper out of it, but then I need time to photoshop it to make it look more interesting. 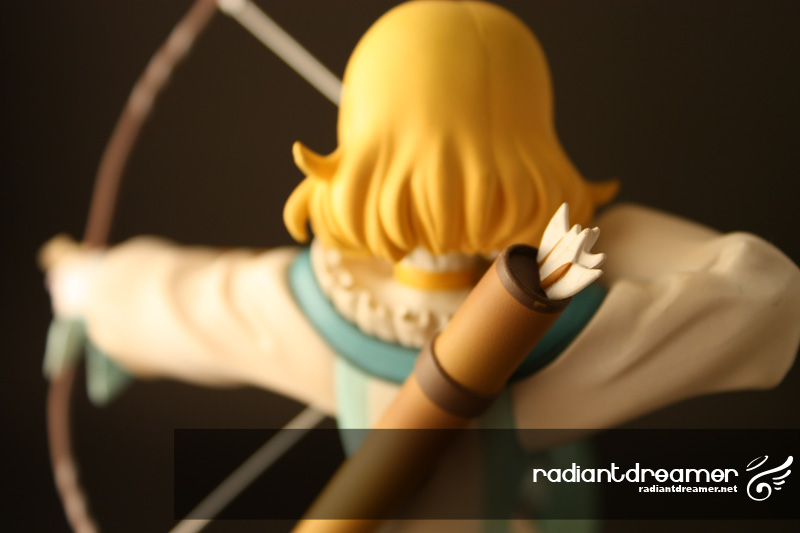 The back view. That quiver of arrows also looks incredibly clean. It’s like a perfect cylinder! 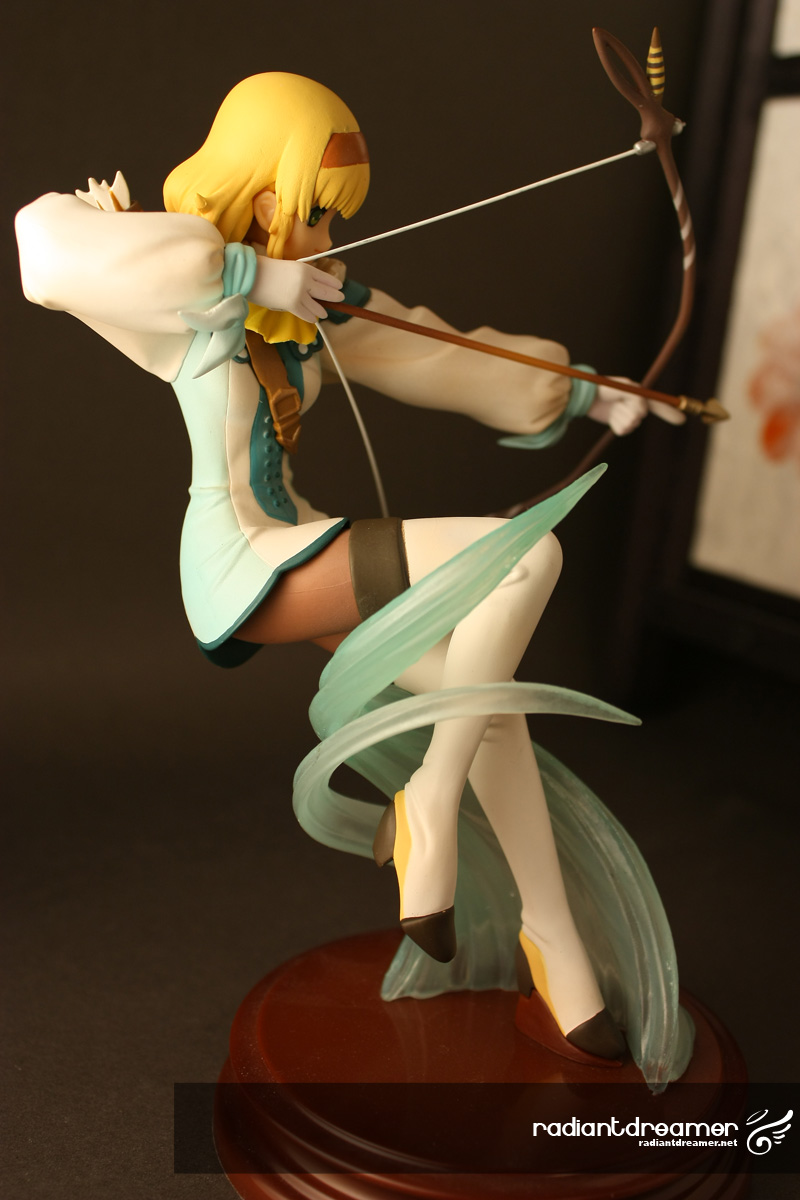 Those whispy things are kinda cool. It totally matches the color of her outfit too. Is that Mako Energy?! 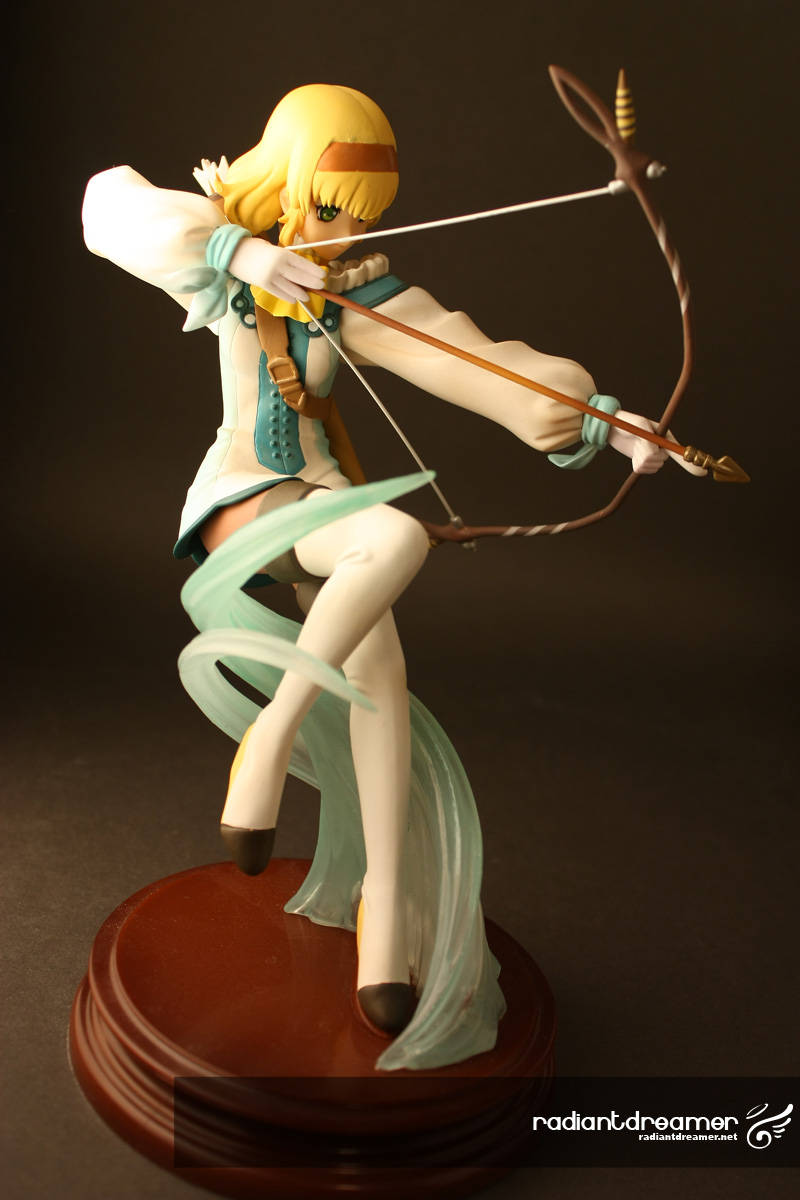 The tips of the bows have a rather unique and interesting design. They do kinda remind me of Kureha’s bow, though these tips are more interesting. They have a sort of South African feel to them. 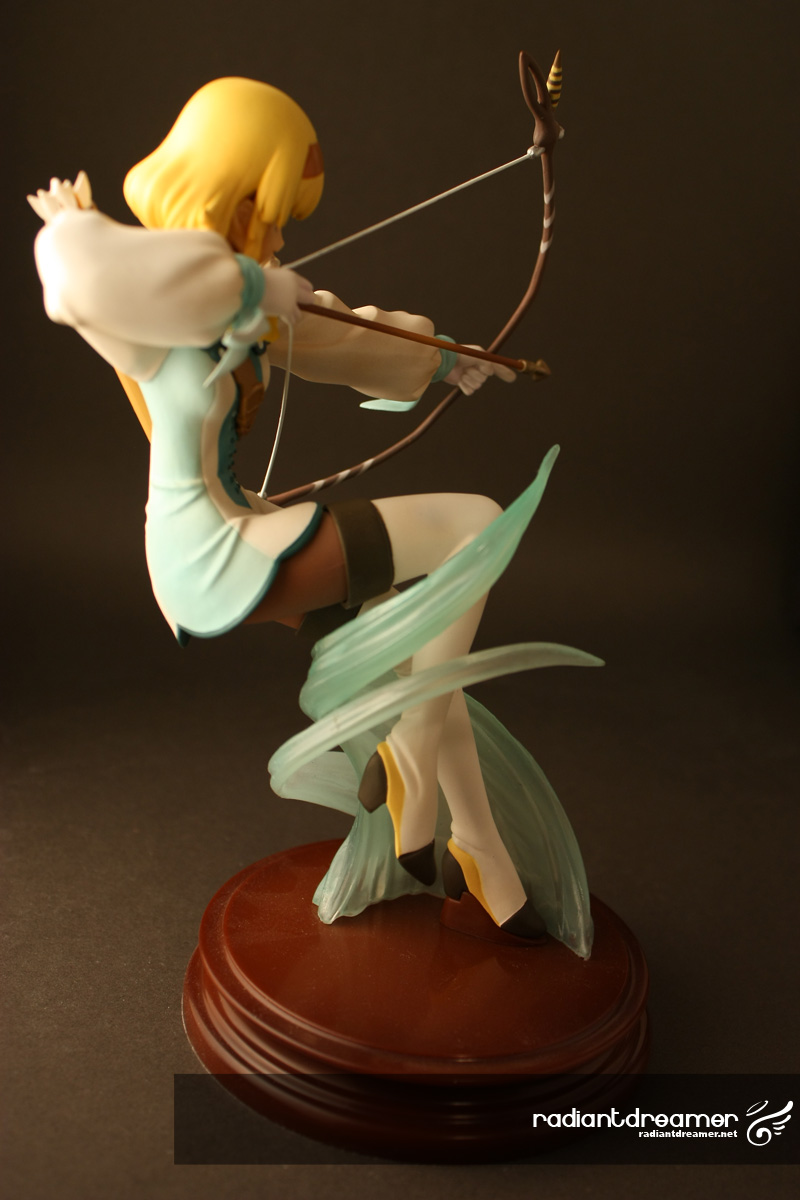 Dancing with the whisps. 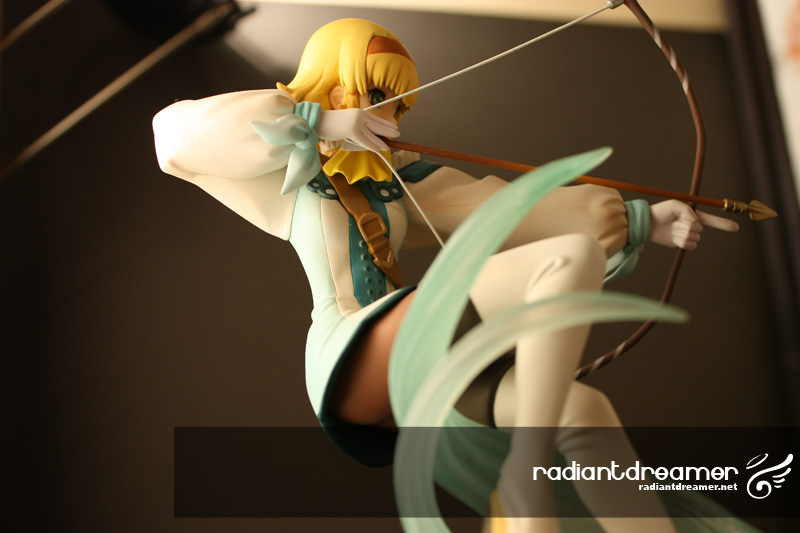 I was going to toss this shot because it showed a part of the light, and the top of the paper background, but it actually adds a bit of interest to it. 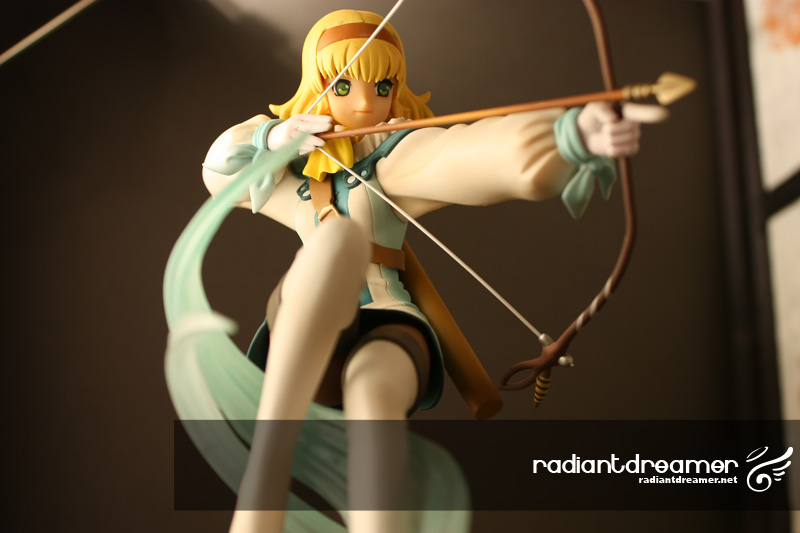 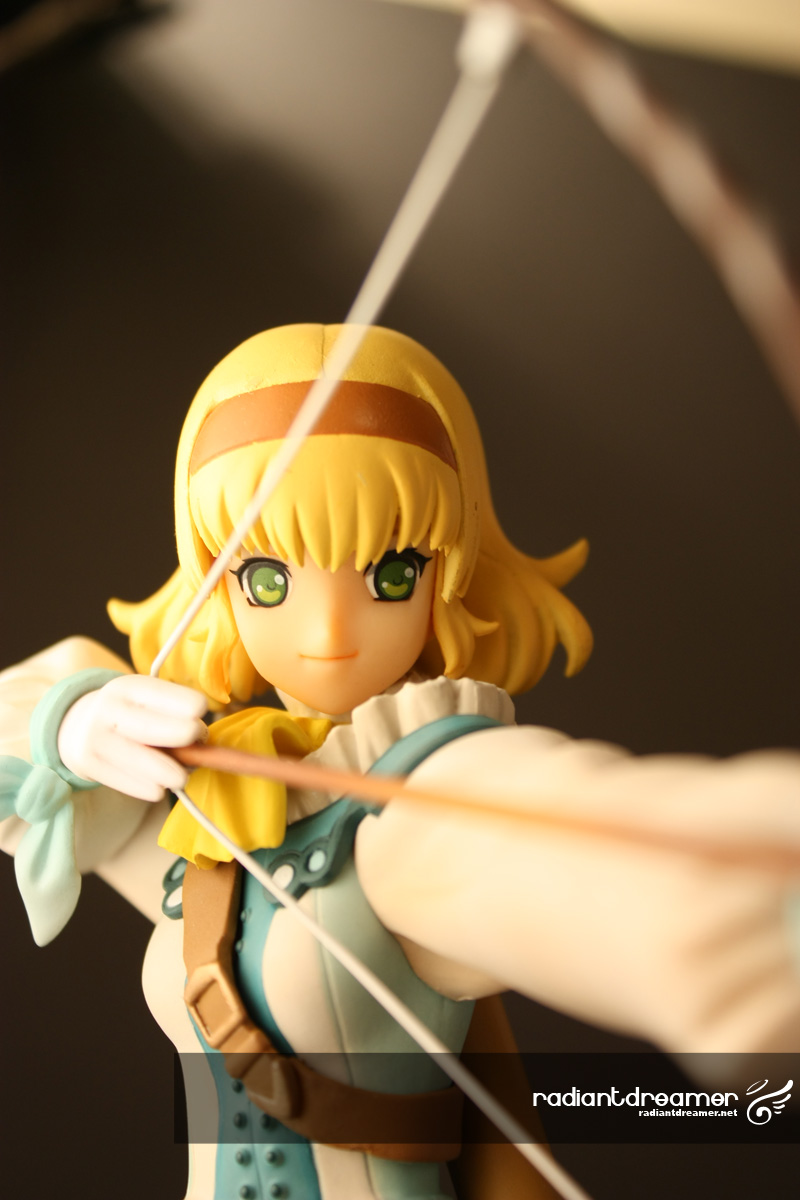 Close-ups are always nice. Check out those huge eyes! (Obviously not the other pair). The little neck scarf is pleasantly done. I also like the buckle a lot, and the little buttons in the middle are neat too. 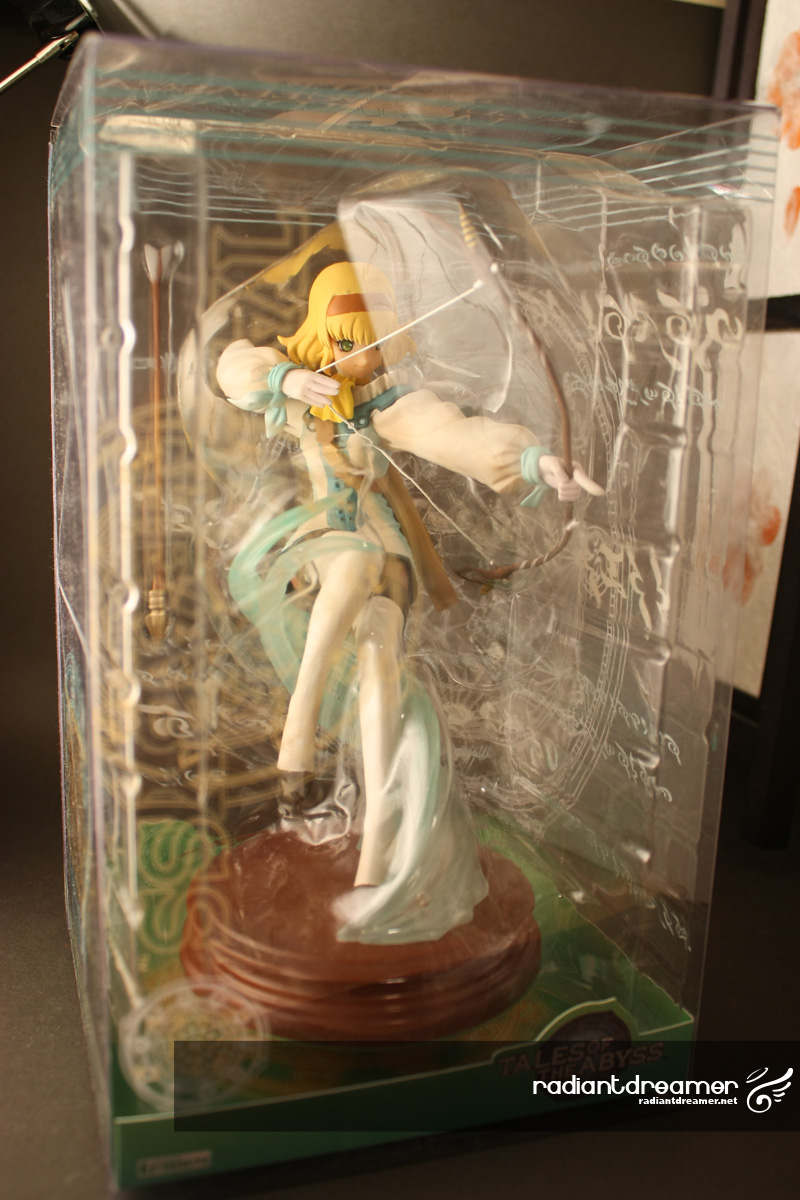 This is the original packaging she came in. Mint is also packaged like this. All of it is completely transparent with awesome glyphs all around. I’ve never seen any other Kotobukiya packaging like this. Heck, any other figure besides Alter’s KOS-MOS Ver 4. (need to open that up and do a shoot of her sometime too). 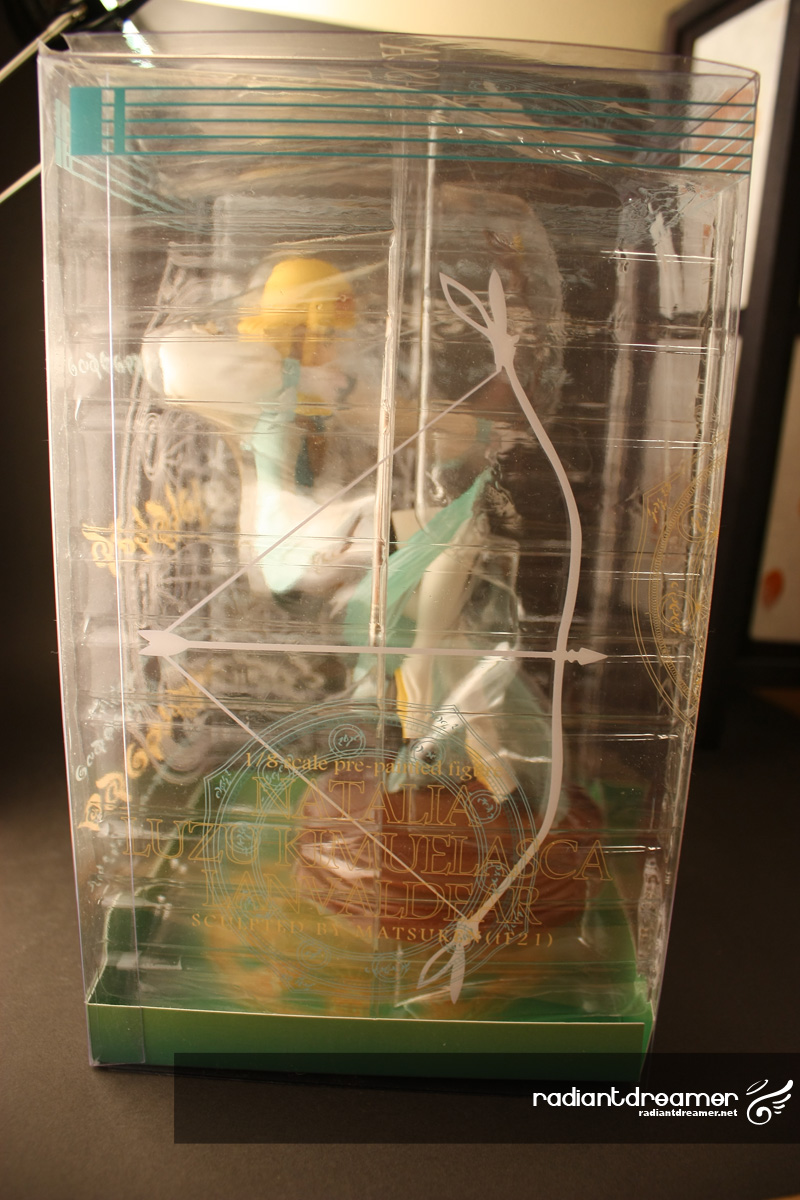 That bow and arrow is kick ass. 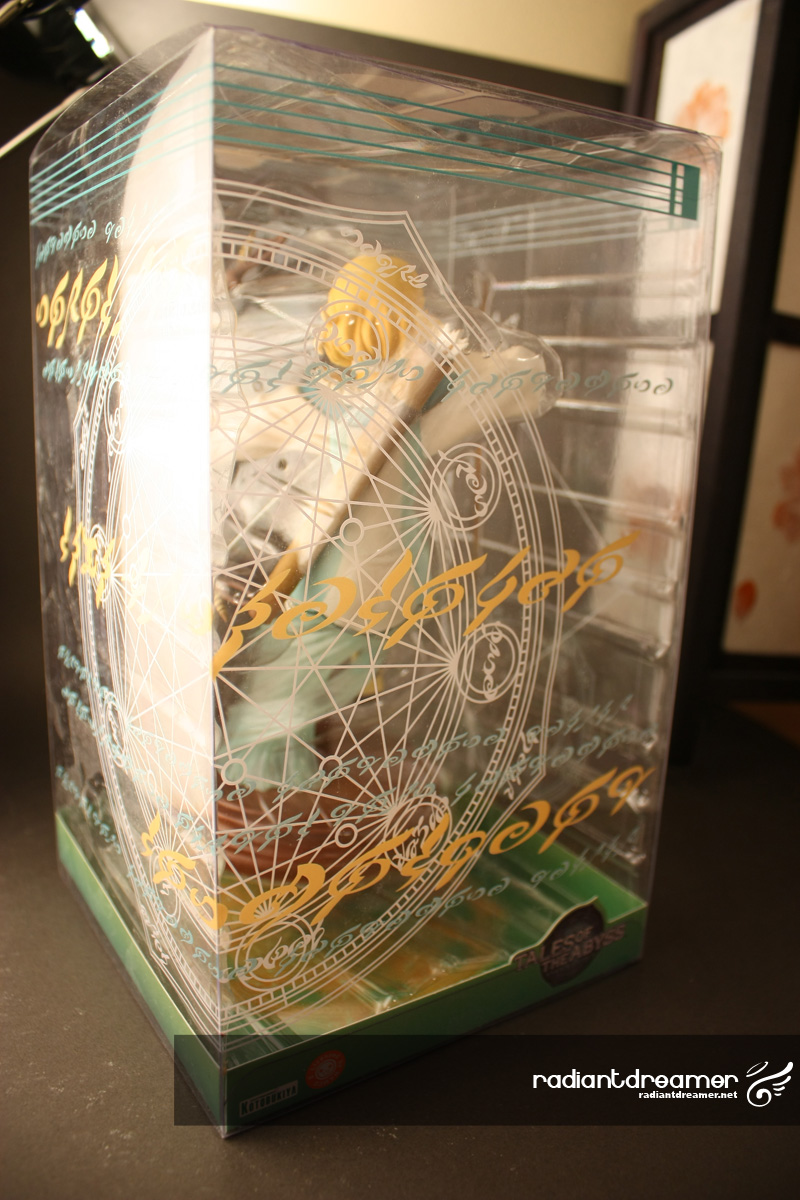 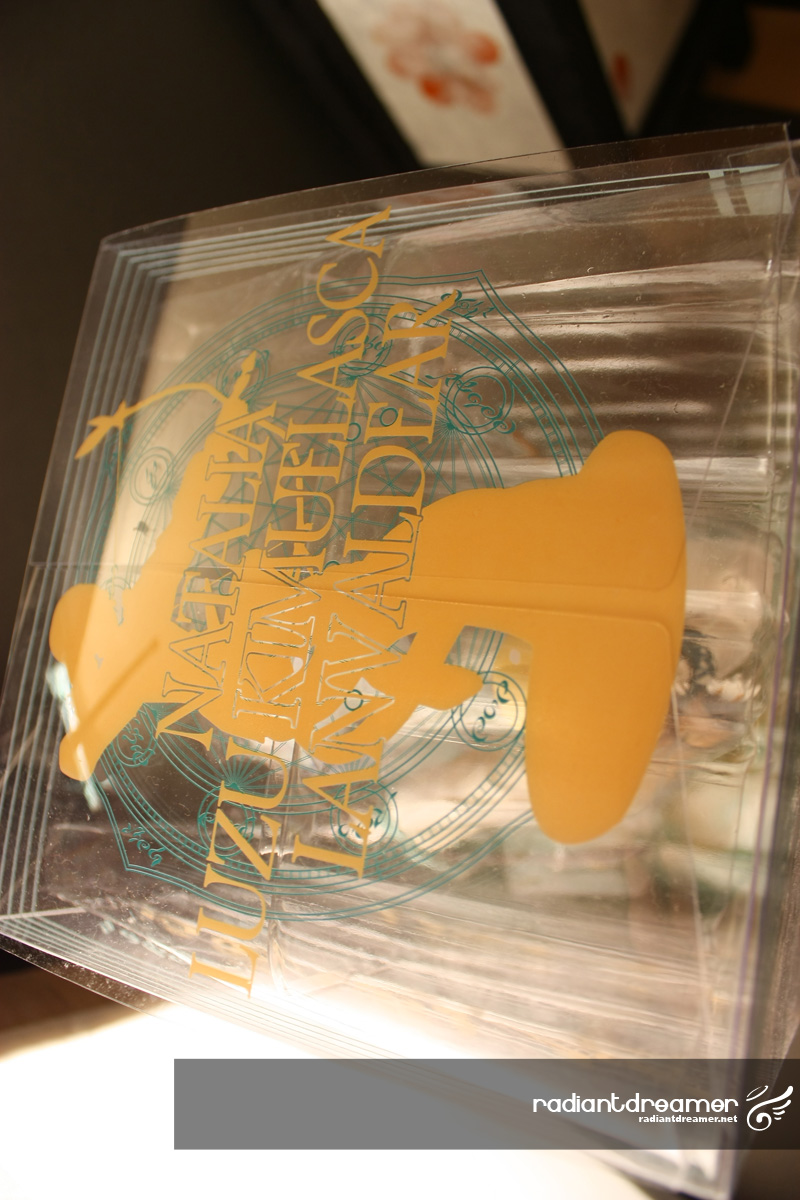 The top of the box. Man that is a hell of a long name! 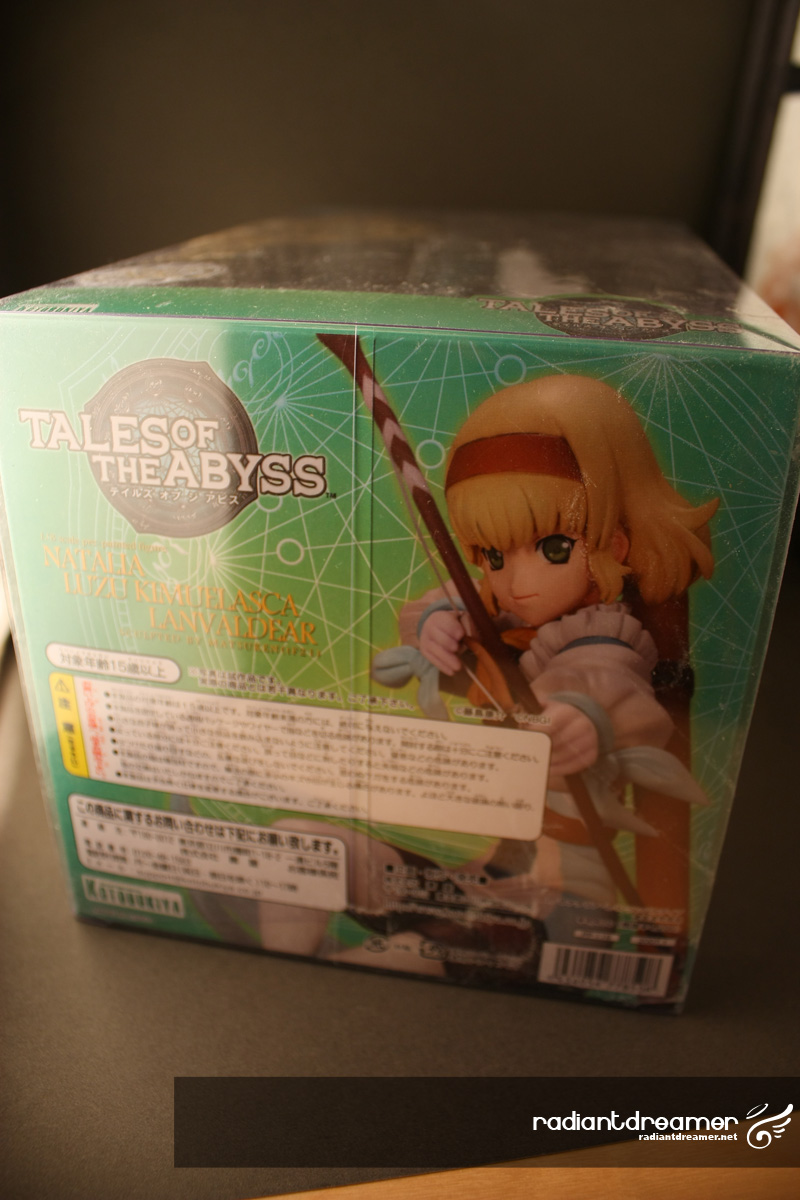 The underside of the box. I actually don’t like the lighting they chose for this. It isn’t very flattering, and actually makes the figure/packaging look decidedly old-school.

And just so you know, this figure is up for grabs. If anyone is interested, email me at info.at.radiantdreamer.dot.net.

I apologize that this shoot isn’t Raquel Gothic. I’m actually waiting for a good day to do an outdoor shoot for her. Tune in next time for it though!

EDIT: This figure has now been sold for my asking price of $60.

I create stuff in my mind, and try to barf it out onto tangible mediums such as Photoshop, and video game art. Sometimes, I get paid to do it because I'm a freelance artist working in the video games industry. Getting paid to do what I love (video games, and art) is my dream come true!
Super Secret Project – Revealed and Underway!!
Moka Akashiya Arrives, bloggers disappearing?!