Understanding the Silhouette – How To Design A Character

Designing a character is difficult, and can be overwhelming . One can’t even begin to think clearly with so many different variables. It helps to break it down a bit and go through a certain process in order to achieve a character who is unique and creative. While I won’t be going over the exact process, I’ve done a quick study on one element that one should be aware of in creating a character, broken down into several pieces and examples.

If you’re designing a mascot, it may not seem all that important, and more like just a fun thing to do, but in reality, having a background story is one of the most crucial base parts in creating an effective character or a mascot.

A background story gives your character a motivation for existence, and oftentimes, that drives the elements of every aspect of your character design, from posture, to appearance.

Let’s go into a couple elements when you have a background story:

Look at this silhouette below, and guess who it is. 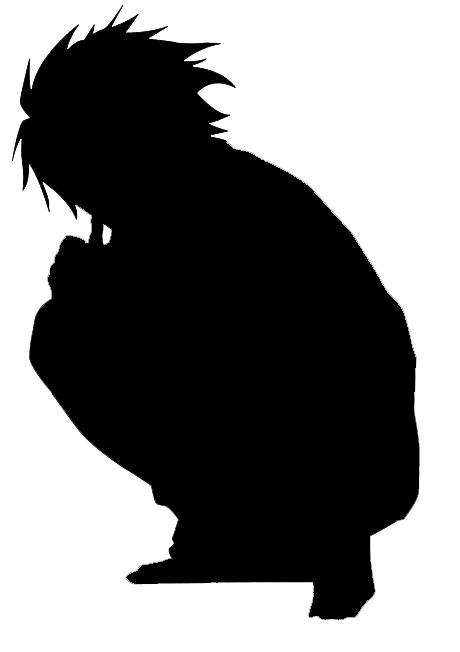 It should be pretty obvious who this is. All you had to go by was his posture, and his hair, really, but yet he’s easily recognizable as the legendary L. Personality plays a huge part in this here. L is legendary because he’s basically a super genius. His background story is solving unsolvable cases. With that, it lends itself to the idea that super geniuses are also eccentric, and quirky. That quirkiness is brought out in L’s posture pretty much at all times. Now, compare that to this: 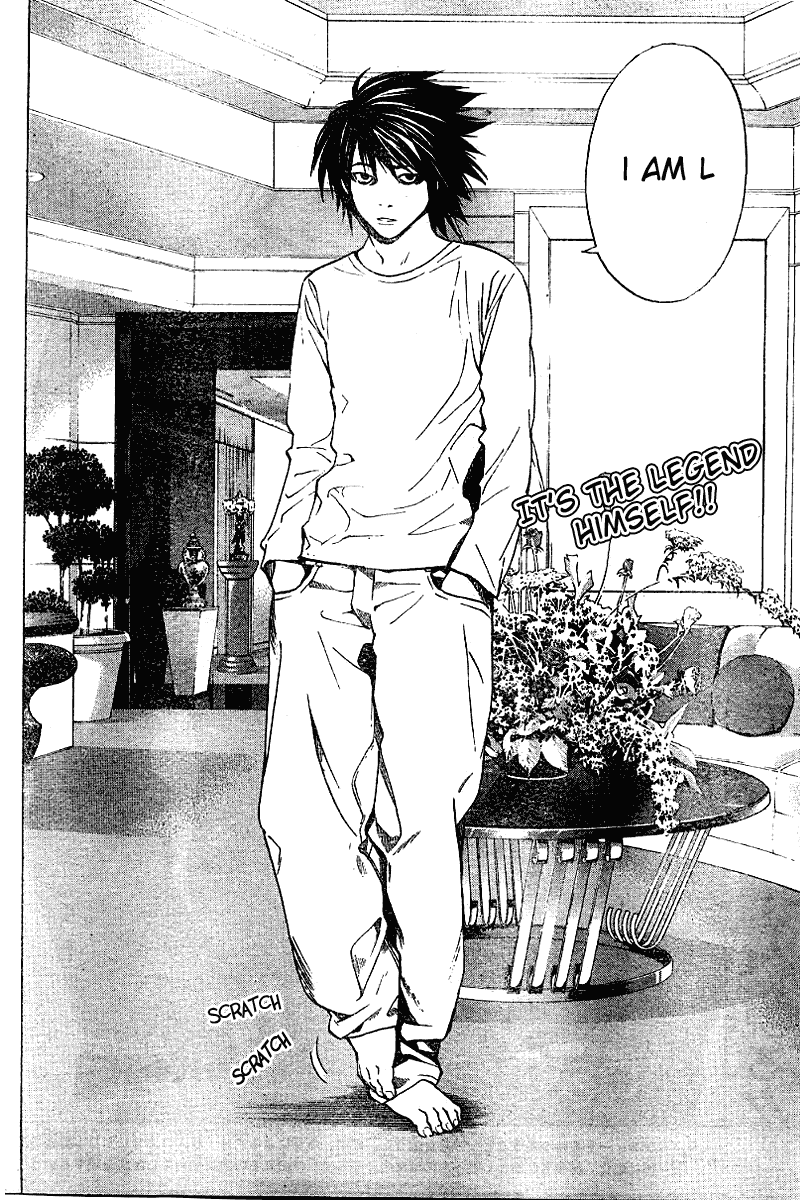 Notice how L is standing straight, and is pretty much a normal featureless guy, save for those dark eye bags. If you’ve read the How To Read volume of Death Note, you’ll know that when L was first designed, not much background information was given to the artist, Obata-san. He didn’t really have much of a choice but to illustrate L in this sort of unidentifiable manner. Most of the time, L was actually standing around, never hunched over. L doesn’t show much of his quirks until near the end of volume 2. He still holds items like a normal person until that point. After that, L is almost always hunched over, and always holding his items like a dirty dish rag.

L breaks one rule of being unique through his appearance. Almost all of his appearance consists of a plain white shirt, and blue jeans. You can’t get more generic than that. His ONLY unique physical feature are the dark eye bags. What makes L unique then, is his posture, his personality. Anytime you see a good L cosplayer, he’s usually hunched over.

Quirks and other Physical Appearances

Sometimes, logical likes and dislikes also help build a character’s quirks and physical appearance. L loves sweets and nothing else. Maybe your character is a pervert.

Can that kind of personality be illustrated strictly through the character design? Most certainly!

So what is there in a background story that drives the character’s personality, and even appearances?

Say for example, your character is a mercenary of a task force team created to obtain an ancient relic of a legendary sword that claims will grant unfathomable power. In his greed, he obtains the sword for himself, and kills all his team mates, only to learn that the sword is actually cursed, and now he must find a way to remove the curse. How would this affect your character’s appearance?

He might be some really gruff unshaven guy, with black hair to reinforce his greed and scars to show veterinary experience. Maybe a huge burn mark or deformed hand from which he held the cursed blade. The sword itself could have a very different appearance from say, a sacred sword. Maybe he wears something on him to illustrate his motive for obtaining the sword – like maybe he was hoping that the sword would bring his lost love back to life, so he carries a locket with her picture in it.

Here is what I would consider “poor character design”. She’s a drawing I did some years ago. By simply looking at this character, what can you tell me about her? 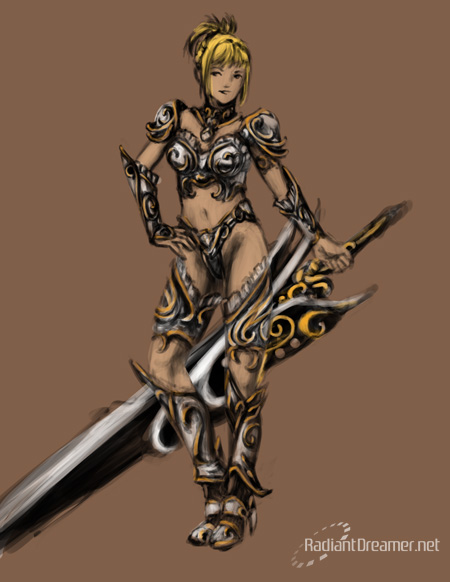 Other than how she looks like a Lineage II character, not much else.  Maybe a warrior of some sort? But that’s about all you can tell. You could say she’s not very smart because she’s blond (kidding!) and is wearing very little armor to protect her vital organs? And maybe she’s umm… magically strong because she can carry a sword twice her height? I think you get where I’m going with this.

Here’s what I would consider strong character design concepts. Another drawing I did several years ago. Two different designs for the same character. 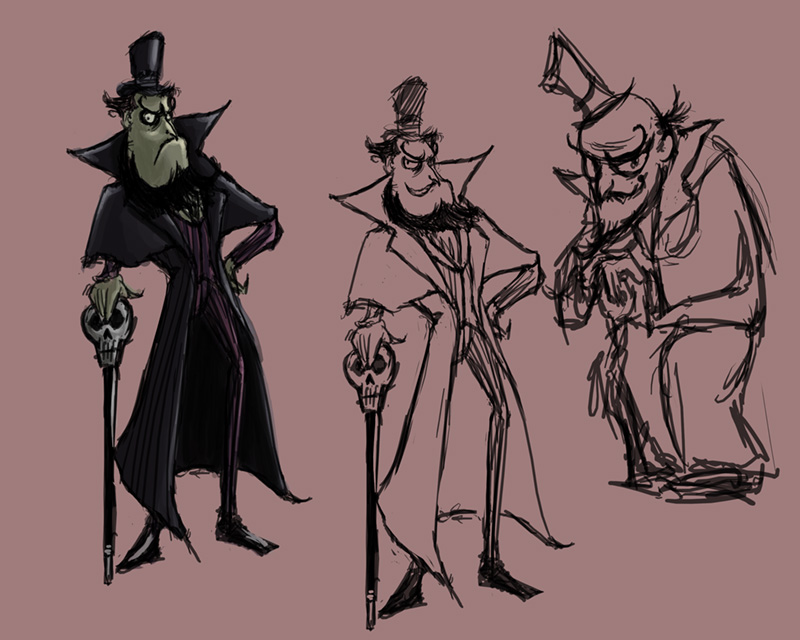 With these two designs, you can tell the different personalities right away. His frail thin body shows that he isn’t a man that works at the docks, but his facial expression shows that he means business, and knows how to get it. The hunched over version shows him much more sneaky, while the other posture is one of power and confidence.

When you have a good background story, and interesting personality traits, it brings a logical appearance to your characters, and communicates to your viewer what the character is about without even saying a word. Don’t just put a mask on your character just because. There has to be a reason for it. Vega doesn’t wear a mask “just because”, and neither should your characters.

I create stuff in my mind, and try to barf it out onto tangible mediums such as Photoshop, and video game art. Sometimes, I get paid to do it because I'm a freelance artist working in the video games industry. Getting paid to do what I love (video games, and art) is my dream come true!
Black Angel – Black Rock Shooter Photoshop
Optimizing Myself