Manaka Takane nendoroid arrived just moments ago. It seems, according to the box, she’s from a series called Love Plus. I’ve never seen Love Plus before (is it an anime? an eroge?) and I can’t really say whether I intend to or not. I’d have to ask the google gods if it’s a good investment of my time (or I guess you guys can help me out with that too, if you’ve seen/watched/read/played/fapped to/whatever it)

When I first saw this little nendoroid cutie, I had no idea what I was buying. Okay fine, I was buying a nendoroid. But that’s about all I knew, and all I cared to know. I mean look at her! She’s SUCH a cutie! 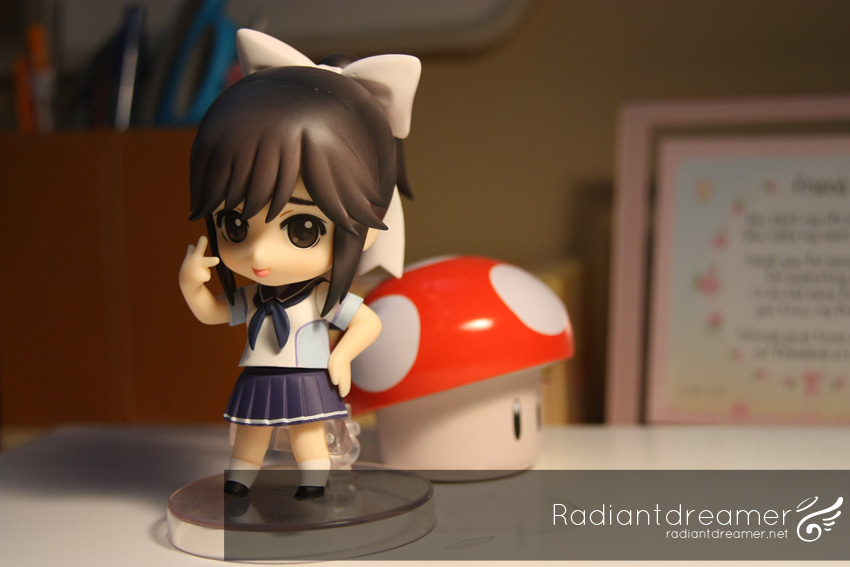 She has no accessories. All she’s got are 4 faces (typical of nendoroids) and wtf EIGHT arms to choose from. I bought her solely for 3 of her facial expressions – the closed eyes, the circle eyes, and the little pouty face with tongue sticking out. I’ve found myself frequently buying figures I know nothing about. Sometimes that’s not the case, like with the Odin Sphere and Momohime statues, KOS-MOS, and other video game characters/anime. But then there are these other ones that just look great and I’m like “who is this? who the fuck cares?! Not me!” Paypal’d!

If you need some more lols, I bought the entire K-On nendoroid set, plus now own one of the two wonfest sets (where can I get the second set? drool drool drool) and have not seen a single episode of K-On! 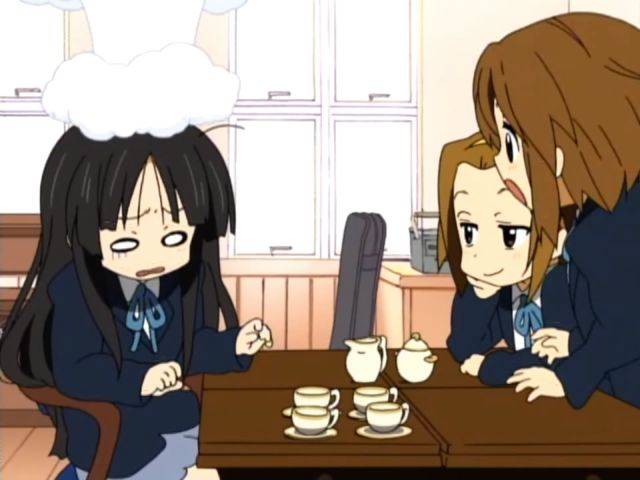 I obviously have no idea what I’m missing out on. But that’s not the point.

Okay, I lied. I watched episode 1 with my wife, and she lost interest, so it was put on hiatus. But at least I know what K-On is. No idea what Love Plus is. And yet still, no idea what 60% of my anime figures are supposed to be about either.

Why do I buy [????]? The majority of the time, I buy it for the aesthetics of the figure. (at least that’s what I tell myself) If it looks nice, then I don’t care. It’s mine. No time for regrets now. Maybe later, when it’s sitting on my shelf collecting dust, and I’m crying about how much space this figure from [????] is taking up. Goddammit, [????]! If I watched the series, it might have turned me off enough to NOT buy you! (or worse, I end up buying everyone from the series too).

Actually, sometimes, when I see a figure that looks interesting enough, I’d be curious on what the series is about (insanekitten had a case of this too, recently). Sometimes, after reading the synopsis of [????], I actually do get turned off by it, and end up not buying the figure in the end. I guess I didn’t want it that badly then…

But there are also figures that I know nothing about, yet am totally glad I bought it – like Senhime for example. Absolutely gorgeous figure (check out Tier’s review of her).

I’m sure a bunch of you buy figures you have no clue where they’re from. Why do you buy [????]? Do you end up watching the series afterward, or while the figure is still in preorder? Have there been cases where you canceled a figure because you watched the series?

I know some of you will refuse to buy figures that you know nothing about too. What’s your reason for that?

From the time it takes for me to see that newsletter, to clicking “Finalize Order”, is roughly 3 minutes. To make a decision in 3 minutes, it’s gotta be impulse. I log all my orders in an excel sheet so I remember what I bought. I even put a URL link to the figure in case I forgot what (not who because I don’t care who) I bought. Periodically, I click on one and be like “ohh yeaaaah. Now I remember!”

It’s weird that way because for everything else, from computer hardware, to a $2.99 iPhone game, I go online, do some research, spend hours on this stuff, and sometimes don’t even make the purchase in the end. Yet I’m willing to invest (sometimes) over $100 per figure to express my “fandom” for a series I know nothing about. I mean, who the heck is Marissa anyway?

In case you’re wondering, Takane Manaka is available at hobbysearch. Be like me, and go buy her now! You won’t regret it!

I create stuff in my mind, and try to barf it out onto tangible mediums such as Photoshop, and video game art. Sometimes, I get paid to do it because I'm a freelance artist working in the video games industry. Getting paid to do what I love (video games, and art) is my dream come true!
2010-08-27
I Create a Mascot for Mukyaa!!