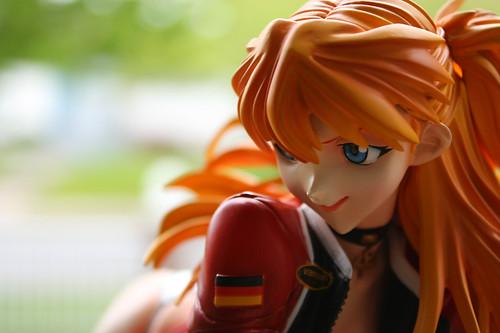 As promised, the much anticipated review of Asuka on Motorcycle. I wasn’t even aware that my site has reached 61k hits now! But priorities first – a review of this absolutely amazing investment (yes, investment). More photos after the jump! 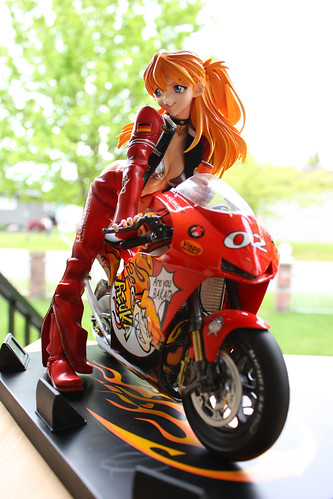 Asuka is a 1:6 scale figure, though I feel the approximation is closer to 1:5. I’ve never seen a 1:6 figure this big before.  Her bent over is already comparible  in height to many of my standing 1:6 scale figures (in retrospect, I should have taken a comparison shot). 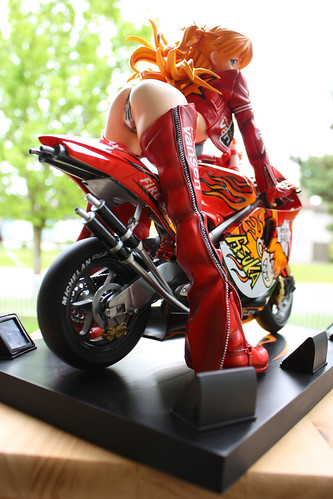 The detail of this figure is absolutely amazing. The bike looks really good too! This combo really sells it as a complete package. 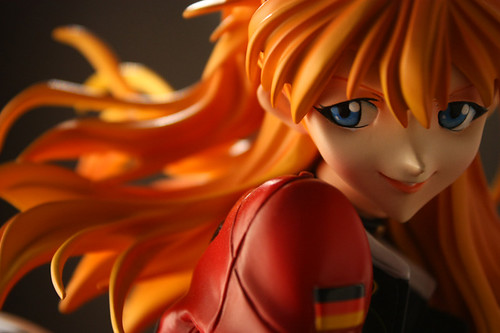 This was resin-casted and painted by the great gods at e2046 by Gathering. Made out of solid resin, she actually feels very sturdy, and VERY heavy compared to most kits I’ve seen. If you don’t know, the sculpt is done by Vispo. I unknowingly, am a fan of Vispo’s work. He also did Morte, as well as Raquel Goth, which I did buy, btw. 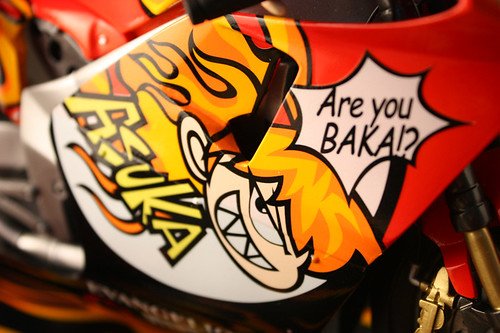 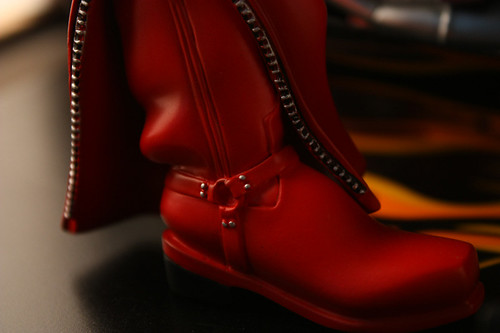 Detail in the boot is nice. I kinda thought that the ring should be metallic colored though… 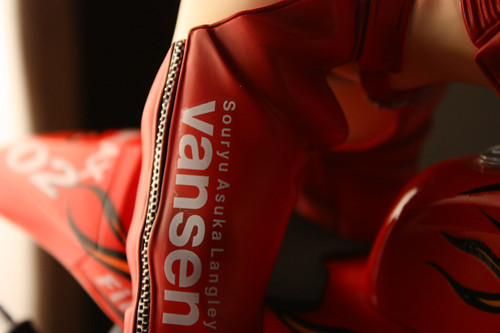 More awesome decaling, and the zipper is so cool! The sculpt of the leather looks totally awesome. 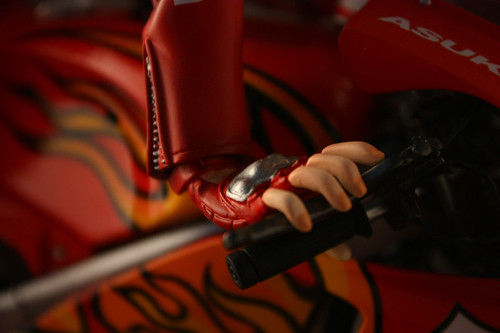 She has painted nails! I’m surprised at how well the detailing came out from this cast. I’m sure a lot of clean-up work was done to it too. The fitting was a little loose though. Her hand would fall out sometimes if I moved it. It’s essentially the handlebar keeping it in the socket. 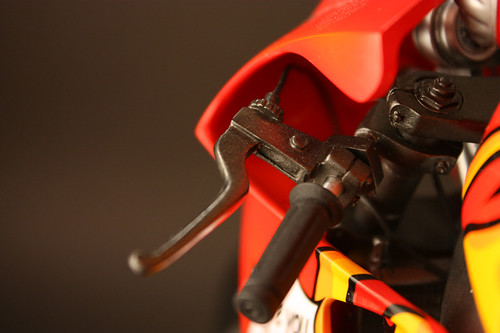 The handlebar in itself deserves much attention. The different color/shine of the materials really bring realism to this already highly detailed aspect of this figure. 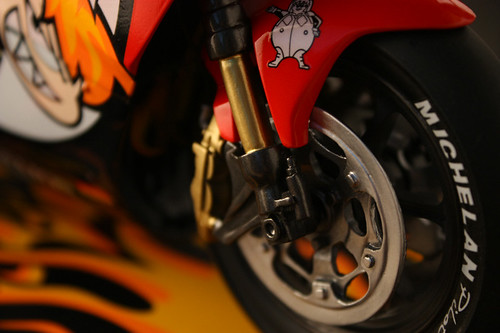 The wheels are awesome in detail too, though they don’t seem as clean edged as the rest of the figure. The wheels actually do turn, btw. 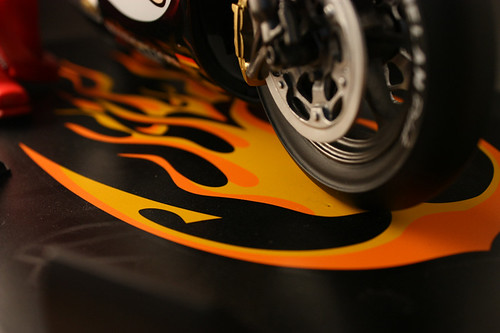 An e2046 exclusive is this awesome display base. It’s embedded with blue LEDs that light up the whole figure all around. Unfortunately, the one I received is broken somehow. The wiring was obviously done without any skill whatsoever. But I don’t really mind, since blue LEDs would make this figure look like crap anyway. 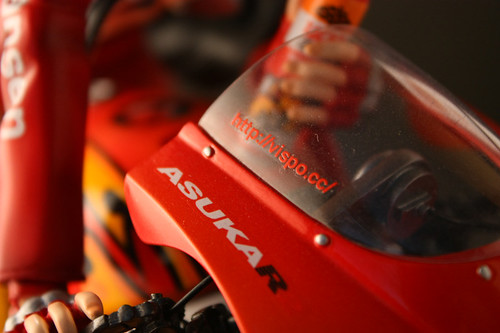 Visit the site. vispo.cc and check out the making of Asuka, as well as some other really cool stuff they’ve got. It’s amazing and worth looking. 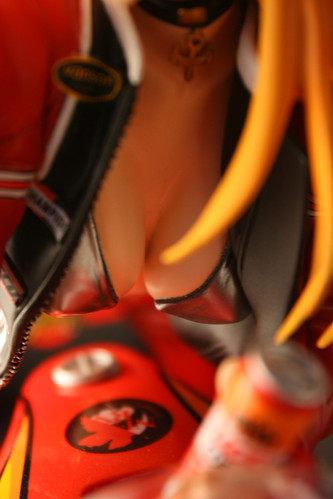 A close up shot of the NERV logo, and gas cap. Check out Asuka’s necklace! <_<; 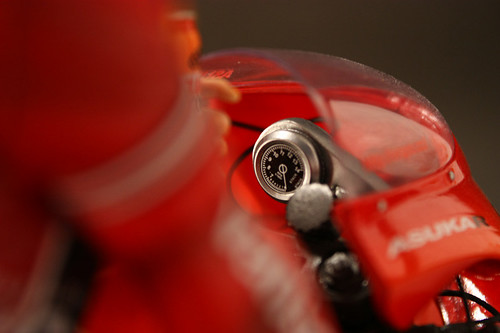 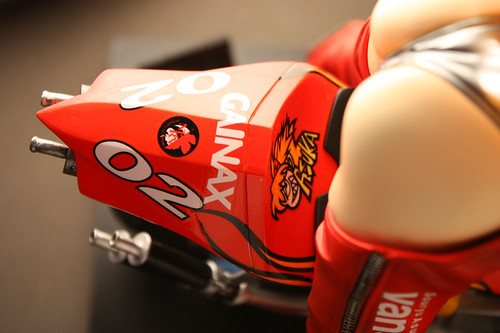 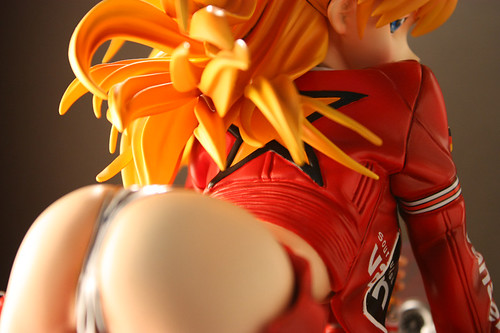 She has a star on the back of her leather jacket! Very Rock Howard! <_<; 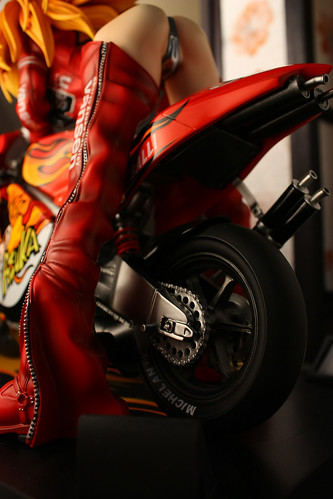 This is one of my favorite shots. The lighting, the spokes on the wheels, the chain, the angle… love it! 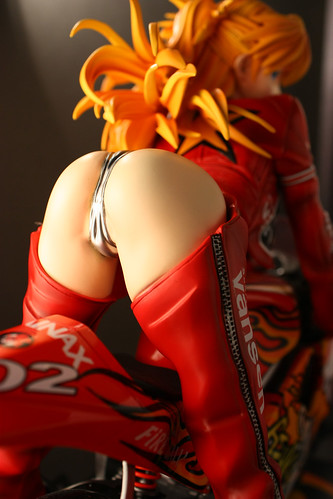 Somewhat redunant, but here’s her ass. 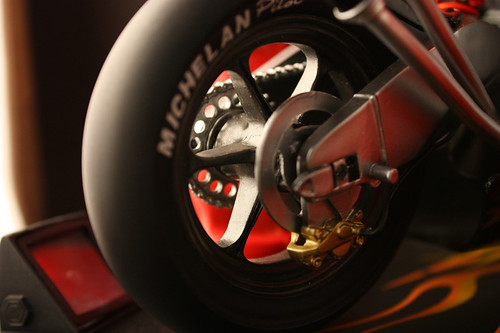 More amazing detail. This thing actually comes with a metal stand to hook onto the peg, like a real motorcycle. But I found that I don’t really need it since Asuka props it just nicely. Check out those spokes!! 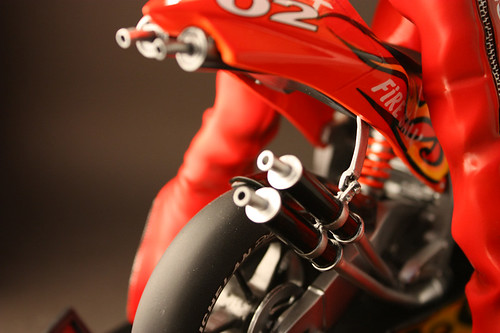 The exhausts are quite nice. 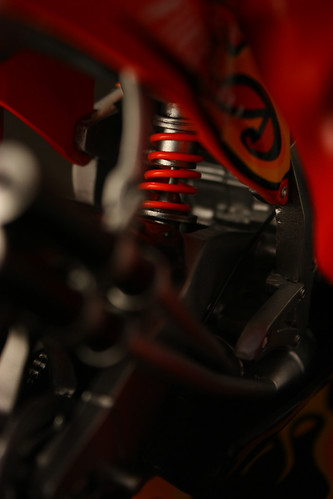 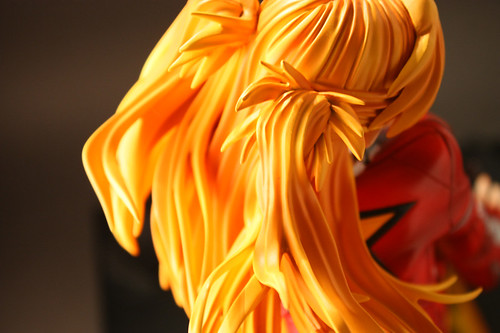 Asuka’s amazing hair. It reminds me of Cheetos. 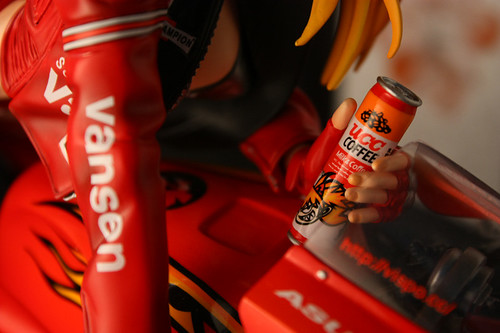 UCC Coffee in hand. Most excellent. 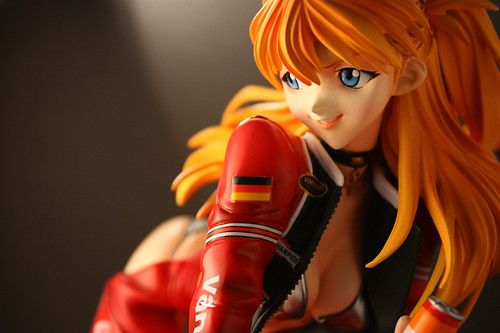 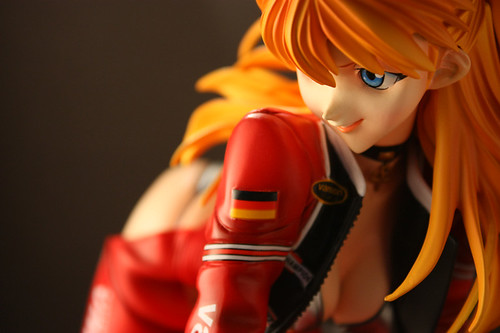 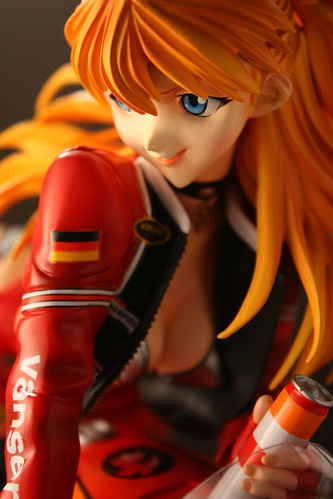 I’m very impressed at how clean the sculpt lines are, and how sharp everything is. Vispo did an excellent job, and Gathering an excellent job of casting this amazing figure. 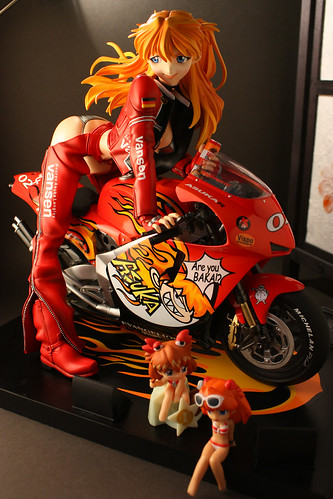 Full shot. I was originally going to do an awesome awesome photoshop image idea, but couldn’t get the proper angle, or find the proper photograph for my needs. Looks like I probably won’t be getting a chance to do that anymore, as my interest in doing one for her as died. 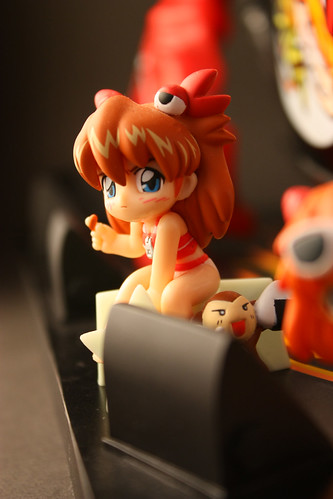 This didn’t come with the figure, but I thought it was suitable. 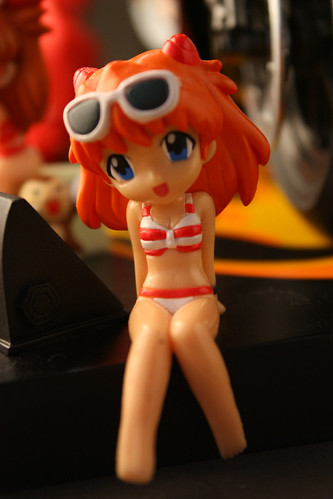 This didn’t come with the figure either, but sits very nicely on the display base. It’s almost race-queen-like. So wraps up another figure review! Stay tuned for the rest of the week, as I’ve got a little something more to celebrate the 60k hits.

I create stuff in my mind, and try to barf it out onto tangible mediums such as Photoshop, and video game art. Sometimes, I get paid to do it because I'm a freelance artist working in the video games industry. Getting paid to do what I love (video games, and art) is my dream come true!
International Saimoe League 2009! VOTE NOW!
My Current Collection